I’ve made no secret of the disgust I’ve had with the Second Amendment crowd dating back to the State of Virginia swimming Left in a single weekend. All of that state’s well-organized militias swiftly held a peaceful protest kindly asking Governor Northam to give up his successful coup… harshly self-policing to ensure that nobody actually used any of those AR-15s that they’d prepared for exactly that situation. Screw you, gun nuts. That was your Go Time and you knew it.

The most hypocritical thing you can do is arm up like Rambo with the intention of proving how nice you are by never, ever firing a shot. Which is it gonna be?

But I cannot say that the massive over-armament of ‘Murica has been entirely pointless. Today, we’ll hear a Globohomo Jew split legalistic hairs to explain why he isn’t calling for direct confrontation with vaxx dissidents… without naming “Beretta the elephant” in the room.

Think vaccine mandates are controversial? What if police held you down and injected you?

By Nicholas Goldberg for the Los Angeles Times, 29 September 2021

“What if police held you down and injected you?” You mean, like this?

On January 7, 2021, Los Angeles County Sheriff Alex Villanueva put “Operation Homebound” into motion. A program designed to vaccinate the most underrepresented, homebound, and underserved disabled residents in our communities, including those experiencing homelessness.

With armed men ready to use force if the ‘underserved’ should refuse their kind, voluntary help.

We are administering the Johnson & Johnson (1 shot only) vaccine utilizing our deputy sheriff personnel who are certified paramedics and emergency medical technicians. LASD is working with local community based organizations like “Integrated Community Collaborative” and “Disability Voices United” to connect with LA County residents most in need, go to their residences, and provide them this life-saving opportunity.

“They gave consent via an approved NGO or legal guardian.”

And that was in Goldberg’s own backyard of Los Angeles. So yeah, Nicky, tell us how you’d do it differently from China. And why.

At the end of August, police in China’s Hunan province came to the home of Zhang Jianping. They questioned him about why he had not been vaccinated against COVID-19, and took him by car to a hospital.

In a social media post that included photos and videos to back up his story, Zhang said he was very clear that he did not want to be immunized. “I am not informed. I do not consent,” he says he told the authorities. But they held down his arms and legs and forcibly injected him.

According to Yaqiu Wang, the researcher at Human Rights Watch who saw Zhang’s post, the local police and healthcare officials were acting in response to President Xi Jinping’s call for the vaccination of 80% of the country’s population by the end of October. Even though the central government in Beijing says that “informed consent” is the rule and injections must be voluntary, Wang says many such complaints of compelled vaccination have appeared on social media.

When I first heard about this, I was horrified. For government officials to burst into people’s homes to forcibly vaccinate them seemed, at the very least, like an extraordinary violation of personal liberty.

He was jealous, not horrified. We know this because he’s a…

But am I being a hypocrite? 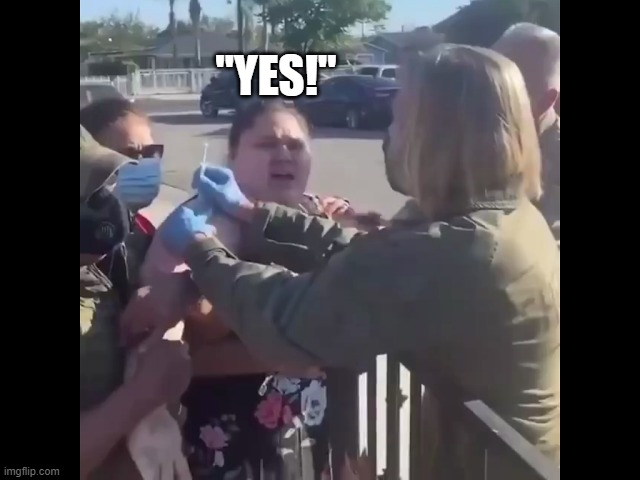 After all, I’m a supporter of vaccine mandates in this country to get recalcitrant Americans immunized. I think it’s reasonable to bar unvaccinated people from restaurants and sports arenas and even schools if they’re not vaccinated. The justification for that goes back to the 19th century philosopher John Stuart Mill’s harm principle, which says that although people should generally be free to behave as they want, constraining their behavior is justified when their actions cause harm to others.

Couldn’t it be argued that pinning people down and vaccinating them is just the logical extension of our own mandate policies?

The Chinese and the U.S. governments have the same objective — to vaccinate the maximum number of people and stop the spread and mutation of the virus. The Chinese are just going a little further in their tactics, right?

Not right. Flat wrong. What these local officials in China are doing is entirely unacceptable.

Because Americans have guns.

Never mind that the 2A crowd isn’t actually going to shoot back… not until the bread and circuses run out, at least. Like women, male feminists are motivated by emotions such as fear. To be fair, that IS a lot of ammo the gun nuts are sitting on….

Despite the harm principle, not every use of power is acceptable to prevent injury to others. It is justifiable to restrict a measure of liberty in pursuit of the communal good; that balance must sometimes be struck. But in the opinion of most bioethicists — and I agree — forced vaccination goes too far.

Reread that paragraph carefully. Goldberg is making an expediency argument for the benefit of the enforcers. What might happen to them if they paid Samuel Colt a little visit? Maybe something not acceptable to prevent injuries to others?

The fight over whether vaccinations should be mandatory is an old one. The first vaccine was developed in 1790 to fight smallpox. In 1853, the immunization of all infants against the disease was made compulsory in England, with parents who refused punishable by fines and prison terms.

That in turn led to anti-vaccination protests and even riots, according to James Colgrove, a professor of public health at Columbia University. As a result, exceptions were added to the law.

Was that cited as a precedent or a preview?

In the U.S., a case went to the Supreme Court in 1905 over whether it was within the “police power” of the state of Massachusetts and its cities to make vaccinations compulsory. The court ruled that it was.

But in neither the U.S. nor England were the authorities seeking to physically compel people to undergo unwanted immunizations. In Massachusetts, the penalty for disobeying the law was not that you were wrestled to the ground and jabbed; rather, you had to pay $5.

Yeah, sure, Nicky. You refuse to break into peoples’ homes and forcibly vaxx them because of an obscure court decision in 1905 Massachusetts. And totally not because your ventilated carcass would bleed out in their living room to cries of “That was awesome!”

Nothing says ‘the bread and circuses are over’ like a goon squad bashing in your door. It’s the one line that you Elites dare not cross. Yet.

Today, too, our “mandates” are really not mandates in any strict sense.

Bullshit, motherfucker! THOSE ARE OUR LIVES YOU’RE RUINING!!!

In the U.S., if parents don’t want their child vaccinated against COVID-19, it’s possible the child won’t be allowed to enroll in public school. But parents have other choices, including in many cases, private school or home schooling.

It’s no fault of the State if parents have a choice.

If a restaurant bars you at the door, you can eat elsewhere. If your employer won’t let you back in the office, you can work from home or seek a new job. These rules are not meant to punish, but to protect public health.

That’s the kind of dishonesty that makes Goldberg a ((Goldberg)). Every restaurant is required to obey the mandates… but sure, you COULD eat at a different one. Theoretically.

Nicky, do you really want to try “learn to code” again?

In general, it’s best to use the least intrusive means necessary to encourage vaccination and protect the population, following what ethicists sometimes call the “principle of least restriction” as well as a sense of proportionality. Robust public education persuading patients to give their informed consent is ideal. Incentives are good too. Bans and restrictions are obviously less desirable.

The ‘Murican State doesn’t have the enforcers to physically coerce everybody. That’s one of many reasons that 80% of society needs to get vaxxed voluntarily. Excuse me, it’s now 98% post-Afghanistan!

There’s a big difference between saying “there will be consequences” for failing to get vaccinated — and injecting people by force.

The right of patients to control their bodies is a bedrock principle not just in the United States but in medical communities around the world.

Translation, Pfizer could be criminally liable if anybody was given their vaxx without signing the consent forms.

“We don’t believe in our society that it is acceptable to force people to take a vaccine even though we might think their refusal to do so is stupid or misguided or irresponsible or even dangerous,” says Colgrove.

Besides, sticking people with needles against their will is unlikely to build trust or encourage widespread cooperation.

What’s this ‘widespread cooperation’, Kemosabe? You won’t even let us in the door without needle-sticks. The first thing you did was wall off D.C., that’s the value you put on ‘cooperation’ with Heritage America.

China is of course a repressive, authoritarian country. It is also, by long tradition, a country that values the community interest over the liberty of the individual. But physical coercion is an unethical and counterproductive way to accomplish the goal of reaching herd immunity, a goal that all countries should be striving for through education, persuasion and adherence to science.

Heehee. Goldberg stares enviously at China’s “just put ’em against the wall” policy and wonders why he can’t do that here.

Because Muh Ghunz! and no other reason. All his pious expressions of community interest, body sovereignty and legal precedent are lies he tells himself as much as you because he can’t face the coward in the bathroom mirror.

“Legal precedent”, what a joke concept. These evil fools can’t honor a contract for a week.

The militia crowd isn’t ever going to use those guns for a regime-change. It’s too late to stop what’s coming even if they did now. But it’s still fun to watch the ((fearfully xenophobic)) wet themselves over what could still be. It’s a special feeling, knowing that you reign in the nightmares of Father God’s enemies.