This Memorial Day didn’t feel like previous ones. It’s not a good feeling when everything one remembers about his country and way of life is just that… in the past. I celebrated this Memorial Day by being ordered out of a hardware store for wearing a noncompliant style of face diaper. I’m sure that’s what the men resting in Arlington gave their lives to see happen. /sarc

Recently, a bunch of active and retired French military warned the French national government that they would stage a coup unless the French national government promises to stop the destruction of France that it’s been intentionally destroying for 20-30 years. Good luck with that… with signing a public parchment warning your enemies of your intent to fight them unless they pinky-swear at you. Or, unless they match your name to your address in their database and pay you a preemptive visit. What would an evil overlord do in that situation, I wonder?

Now America wants to be France. I feel like I missed a memo somewhere.

I expect this will be an apology for their total failure to protect us from Totalitarian Communism?

Dudes… like your careers, that war is over. You lost it, the ones of you who didn’t actively sell out. I *ahem* EXPECT this will be an APOLOGY.

During the 2020 election an “Open Letter from Senior Military Leaders” was signed by 317 retired Generals and Admirals and, it said the 2020 election could be the most important election since our country was founded. “With the Democrat Party welcoming Socialists and Marxists, our historic way of life is at stake.”

How did that letter work out for you?

Unfortunately, that statement’s truth was quickly revealed, beginning with the election process itself.

Keep trying until it works, I suppose. Hence THIS letter! 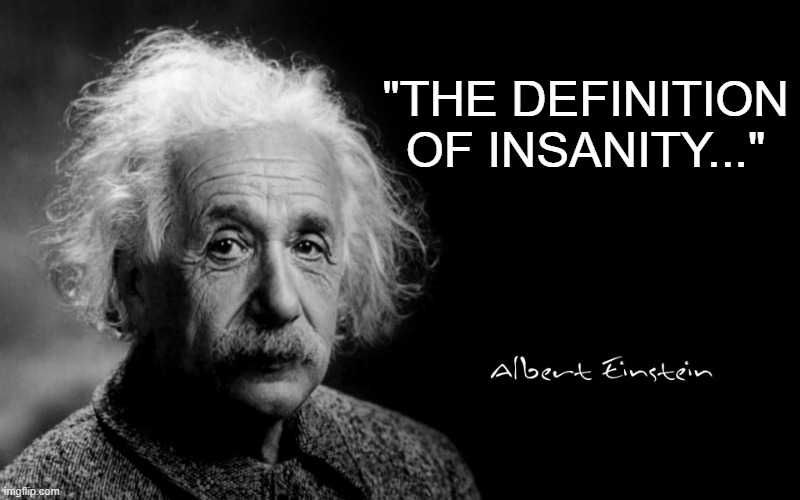 Nobody asked you, Albert.

Without fair and honest elections that accurately reflect the “will of the people” our Constitutional Republic is lost. Election integrity demands…

Blah blah blah. Such pious words from mouths whose oaths soiled the flag worse than I ever could even after binging at Taco Bell. Skipping their synopsis which would have been useful circa 1975,

We must support and hold accountable politicians who will act to counter Socialism, Marxism and Progressivism, support our Constitutional Republic, and insist on fiscally responsible governing while focusing on ALL Americans…

“We” the retired royalty of the armed forces who STILL won’t name the Jew, or “we” the white male taxpayers who are no longer participants in our own government? Not that Jews are the sole source of our problems… we have retired admirals, too.

Sounds like they’re starting a new political party. Headquartered in the Villages, Florida, I assume?

Forget naming the Jew. They can’t even name MASS IMMIGRATION as an existential problem for America. What good would a “big, beautiful wall” do if the globalists only need to issue permission slips ten feet before the hordes reach it?

• China is the greatest external threat to America. Establishing cooperative relations with the Chinese Communist Party emboldens them to continue progress toward world domination, militarily, economically, politically and technologically. We must impose more sanctions and restrictions to impede their world domination goal and protect America’s interests.

The United Nations is the greatest external threat to America followed by Israel.

• The free flow of information is critical to the security of our Republic, as illustrated by freedom of speech and the press being in the 1st Amendment of our Constitution. Censoring speech and expression, distorting speech, spreading disinformation by government officials, private entities, and the media is a method to suppress the free flow of information, a tyrannical technique used in closed societies. We must counter this on all fronts beginning with removing Section 230 protection from big tech.

Old news. I already blogged on how Big Tech has prepared its bypass of Section 230 reform.

I, a mere keyboard commando, am better informed than a thousand Pentagon stars. That should not be; however,  many of the undersigned Pentagon types turned out to be pilots. A pity their hindsight was never checked during those flight physicals.

• Re-engaging in the flawed Iran Nuclear Deal would result in Iran acquiring nuclear weapons along with the means to deliver them, thereby upsetting Mideast peace initiatives and aiding a terrorist nation whose slogans and goals include “death to America” and “death to Israel” . We must resist the new China/Iran agreement and not support the Iran Nuclear Deal. In addition, continue with the Mideast peace initiatives, the “Abraham Accords,” and support for Israel.

How did Israel manage to upload Zionism microchips into so many, MANY American brain stems? Maybe giving nukes to Iran would be a good move. The first SCROTUS to do so would claim the coveted “he brought lasting peace to the Chosen People” award the following day. Which is why God won’t let me anywhere near the nuclear launch codes, but hold THAT thought for a moment!

• Using the U.S. military as political pawns with thousands of troops deployed around the U.S. Capitol Building… seriously degrades readiness to fight and win our Nation’s wars, creating a major national security issue. We must support our Military and Vets; focus on war fighting, eliminate the corrosive infusion of Political Correctness into our military which damages morale and war fighting cohesion.

Question: why aren’t you doing it? Your men are in position with the guns, training and organization. You’d be done in a day. It’s even YOUR FREAKING JOB THAT YOU TOOK AN OATH TO DO. And yet, you write this letter hoping that Normies like me will fix the problem of D.C.’s wickedness? We who are nowhere near there, disorganized and untrained, we’re supposed to do what you on-site professionals won’t? What you on-site professionals would thwart us from doing, to prove your innocence to wicked men who don’t understand the concept?

Is it possible to spell “coward” without “colonel”?

• The “Rule of Law” is fundamental to our Republic and security. Anarchy as seen in certain cities cannot be tolerated. We must support our law enforcement personnel and insist that DAs, our courts, and the DOJ enforce the law equally, fairly, and consistently toward all.

The Rule Of Law now says white men are a national disease and even the memory that we ever existed, must be purged. Do we still need to obey “the Law”? Or were all those laws and authorities created to serve a higher purpose?

What ought to be done with these laws and authorities that no longer serve the purposes for which they were created? I won’t answer that because I’m not French, if you take my meaning.

• The mental and physical condition of the Commander in Chief cannot be ignored. He must be able to quickly make accurate national security decisions involving life and limb anywhere, day or night. Recent Democrat leadership’s inquiries about nuclear code procedures sends a dangerous national security signal to nuclear armed adversaries, raising the question about who is in charge. We must always have an unquestionable chain of command.

Peak Military-Industrial Complex achieved. “The foreigners and traitors infesting the highest levels of our government are taking advantage of the C-in-C’s advanced dementia to argue over who gets access to the nuclear launch codes of the United States arsenal. YOU OUTSIDER CIVILIANS SHOULD DO SOMETHING ABOUT THAT BECAUSE WE SENIOR MILITARY OFFICERS DON’T KNOW WHO IS IN CHARGE.”

Under a Democrat Congress and the Current Administration, our Country has taken a hard left turn toward Socialism and a Marxist form of tyrannical government which must be countered now by…

…Military leaders stopping with useless talk and taking out the D.C. trash before a ((global hedge fund manager)) nukes Moscow?

…electing congressional and presidential candidates who will always act to defend our Constitutional Republic. The survival of our Nation and its cherished freedoms, liberty, and historic values are at stake.

Okay. Sure. Let’s hope for enough victories in the next election cycle, despite the GUARANTEE of massive election fraud, despite this NEVER working in past attempts, that our traitors CURRENTLY fighting over the big red button, CURRENTLY undoing the rule of law, CURRENTLY persecuting Christians, CURRENTLY inciting race wars everywhere, CURRENTLY sabotaging our fuel pipelines and CURRENTLY using our information infrastructure for anti-American brainwashing, won’t ever have a chance to do any of that.

Because anything else would endanger the fat pensions of our most decorated military officers.

Who are they, anyway?

That sounds… ah, Tailhook Scandal 1991. Boys will be fighter pilots.

“Rear Admiral Jon W. Bayless, Jr., United States Navy (Ret), is a consultant to the Aerospace and Defense Industry, having previously led business development efforts across those sectors [in his six commands].”

He was one of the first into Afghanistan (special forces), got friendly-fired by a 2000lb bomb and went back for more, so he’s got guts. I found this on his Wikipedia page: “Bolduc has endorsed the conspiracy theory that the 2020 presidential election was rigged to favor Joe Biden and claims that the United States “has taken a hard left turn toward Socialism and a Marxist form of tyrannical government.” so he’s hated by the Left, too. I’m harsh but fair.

Most of these brass are logistics or pilot types.

He was the onsite commander who fucked up the Iranian Hostage Rescue. It got him promoted to the CIA.

He got the Medal Of Honor for burning through three helicopters in the same day while medevacking wounded soldiers in heavy fog under fire. Vietnam.

Became an education admin in Southern California. Thanks for nothing, signed a Californian.

Another who went into “consulting” less than a month after retirement.

Found nothing about him but John T. Byrd, Jr. was USMC KIA Afghanistan.

His father was also an admiral.

No more USAF will be checked. They’ve all been unremarkable pilots.

Heh, he became a CPA fraud examiner post-retirement. All his consultant buddies must have loved that.

Modernized the Chinook. Must be in his 90s now.

A pilot shot down in Laos during Vietnam, survived two days on the run to be rescued. Alas, went full Pentagon afterwards.

Grady’s life and military career got a “wake-up call” at 0215 on 28 November 1972 off the coast of North Vietnam, when he ejected through the canopy, from an A6A aircraft. The accident happened right after launch from the USS Saratoga and took the life of his pilot. Grady, while floating in the water and tangled in his parachute, and worrying about being run over by the carrier, cried out: “God, get me out of this, but I am not ready to change my life!” Now almost 39 years later, Father God is still changing my and Linda’s lives!

Worst foxhole conversion ever, and emphasis was his.

From Wikipedia: “As Commanding General of the 82nd Airborne Division, he became the only modern-day Commander to lead a division in combat in two separate conflicts. In 1989, he was the first jumper during the night airborne assault of Panama, known as Operation Just Cause. In 1990 to 1991, he led the division during Operations Desert Shield and Desert Storm in the Persian Gulf.“

Ah, another lead-from-the-front type. I understand the importance of brass not being on the frontline but REMFs still get REMF respect.

Could be Pete Buttigeig’s stunt double but is also hated by the Wikipedia troll that hit-jobbed Bolduc.

Did NOT become a consultant but instead tried to stop unsafe old farts from driving on the road.

Seabee and president of his own company.

Back problems kept him from enlisting but he eventually served as a chaplain.

He’s also a retired Los Angeles Police Lieutenant and volunteer for Employer Support between the Guard and employers.

I ran out of time at this point. My apologies.

5 thoughts on “Swan Song Of the Military-Industrial Complex”