The silver lining to hardline-traitor administrations in government is that you don’t have to buy a separate ticket for the freak show. I didn’t know what peak “Capitol Riot” revisionism would look like until I heard Nancy Pelosi brag about how she was going to personally fight off the Trumpinistas when her bodyguards dragged her to safety instead.

Pelosi on Jan. 6: ‘They would have had a battle on their hands’ if the mob had caught her

On her 100th day as speaker of the 117th Congress, Nancy Pelosi discussed the dramatic events that opened her tenure, when a mob that stormed the Capitol wanted to kill her.

A gentle reminder that nobody was intentionally killed except an unarmed woman by a Capitol guard.

“That’s what they were setting out to do,” she told USA TODAY, if her security agents hadn’t managed to evacuate her from the House chamber in time. Asked if that frightened her, she replied, “Well, I’m pretty tough. I’m a street fighter. They would have had a battle on their hands.“

Besides, she said with a laugh, lifting a foot clad in her classic 4-inch-high stilettos, “I would have had these” to use as weapons.

Nancy, you’re old and frail enough to play the lead in those “I’ve fallen and I can’t get up” commercials for Baby Boomer life sign monitoring.

In a wide-ranging interview, Pelosi described a historic start for the new Congress and President Joe Biden, one “on par” in ambition and impact with the first 100 days of FDR and LBJ. She called Biden skilled in Washington politics… 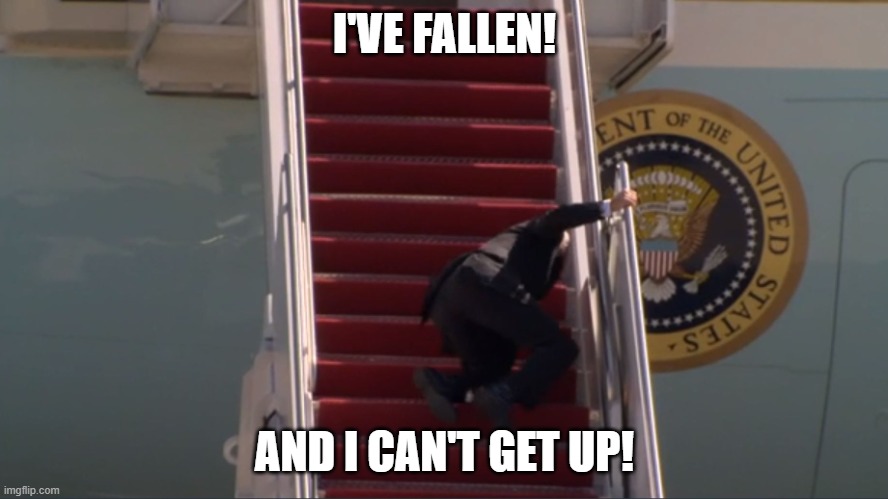 …and bolder in policy than many expected. “Transformative and visionary and experienced,” she said.

But the Jan. 6 assault continues to cast a shadow.

Will there be a 9/11-style panel for Capitol riot?

She said she would soon introduce legislation to harden the Capitol’s security, indicating she would support the installation of retractable fencing to be deployed only when security threats demanded. She also suggested for the first time that she might move to establish a select committee to investigate the Jan. 6 insurrection if efforts to create a special 9/11-style commission failed.

She might want to wait until those 400 prosecutions are finished. They’re unraveling faster than a porcupine’s knitted sweater. Then again, that might be exactly her motivation for moving the proceedings behind closed doors.

“The one thing among our members that is consistent is – we must find the truth,” she said. While she has pushed for creation of an independent panel, she said that goal could also be reached through investigations by the standing committees of Congress, some now underway, or by a select committee.

She compared the prospective select committee to the controversial one established by a Republican majority to investigate the 2012 attack on the U.S. diplomatic compound in Benghazi, Libya, that killed U.S. Ambassador Chris Stevens.

That was a coverup committee. I was never happy with my knowledge about Benghazi. The world’s governments and media freaked out big-time for months on end, over what they would only describe as an ambassador who apparently couldn’t find Tripoli with a map and trusted the locals to protect him because why not.

I dug enough to discover that it wasn’t an embassy in Benghazi. It was a “trade delegation”. My suspicion is that after “regime-changing” Khaddaffi, President Obama was transferring his military supplies to ISIS in Syria and Stevens was the appointed cutout overseeing that… who got cut-out by a third party that I still haven’t identified. Which would mean that Obama was a state sponsor of international terrorism and not just an illegitimate President who illegally waged wars without the approval of Congress.

“It’s always an option,” she said. “It’s not my preference in any way. My preference would be to have a commission.” But that proposal has been stalled in partisan disputes over the scope and structure of the panel.

Her stated preference would be stabbing those Trump supporters with her stiletto heel, which isn’t funny anymore now that she’s fantasizing about doing it to innocent people locked in cages. End-stage female empowerment?

Congress has yet to act on the sweeping security recommendations delivered last month by retired Army Lt. Gen. Russel Honoré. His report calls for filling more than 200 vacancies in the Capitol Police force, adding another 854 more positions to address an evolving threat to lawmakers and staff, and integrating “systems of obstacles, cameras, sensors and alarms.”

“I can mess them up myself! I’m a tough street fighter! I need 1,054 more guards!” What Nancy really needs is a forced retirement into an isolated nursing home where she can eventually die unrepentant and unpunished for all her wicked deeds.

In Christianity, that is the worst fate possible.

3 thoughts on “Pelosi Gonna Mess You Up”