A big thumbs up to the Lizard Queen! for not having her memoirs ghost-written in the form of a childrens’ book. It will remain a work of fiction, however.

Do not roll yet, my eyeballs! This has potential to “thrill” on several levels.

When I was six years old, this was called “playing pretend”.

Clinton described writing the book alongside Penny, who penned the works Bury Your Dead, The Nature of the Beast, and All the Devils Are Here, as a “dream come true.” 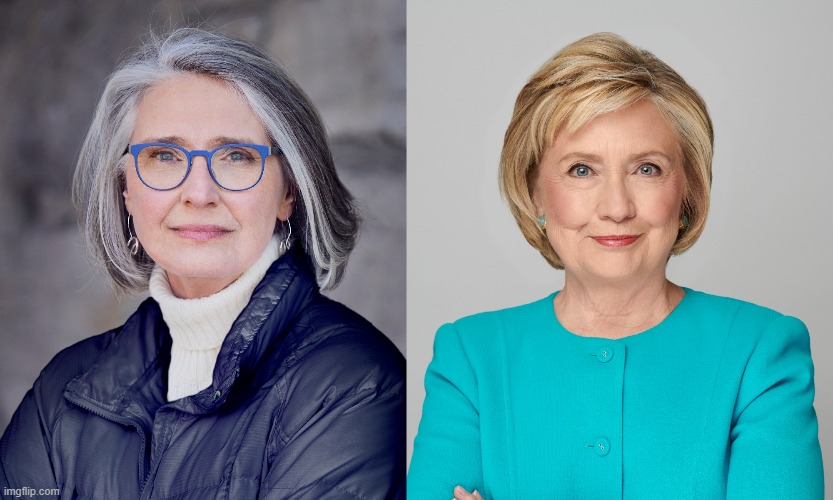 That’s Hillary Clinton on the… umm… wow, they’re twins! And  Louise Penny on the other side. This is either massive ego or Hillary pretending to ghost-write her own book, which is a level of deception that is actually exciting in the context of a political thriller.

“I’ve relished every one of her books and characters as well as her friendship,” Clinton said. “Now we’re joining our experiences to explore the complex world of high stakes diplomacy and treachery. All is not as it first appears.”

Penny was equally eager to pen a book with the former secretary of state.

“When it was suggested my friend Hillary and I write a political thriller together, I could not say yes fast enough,” she said in a statement Tuesday.

Axios first reported [former Secretary of State] Clinton’s fiction book, which centers around a “novice Secretary of State” who “joins the administration of her rival, a president inaugurated after four years of American leadership that shrank from the world stage,” per the book’s synopsis:

“A series of terrorist attacks throws the global order into disarray, and the Secretary is tasked with assembling a team to unravel the deadly conspiracy, a scheme carefully designed to take advantage of an American government dangerously out of touch and out of power in the places where it counts the most.” It is expected to be released by Simon & Schuster and St. Martin’s Press in October.

In hardcover, paperback and human skin.

Clinton’s latest book comes as she continues to expand her realm of influence, launching the “You and Me Both with Hillary Clinton” podcast on Spotify last year.

As the name implies, the viewership is two people. The only way the Lizard Queen could lose with less grace is if she followed Madonna’s example and wrote…

The failed Trump challenger has authored several books throughout her lifetime, including It Takes a Village, Hard Choices, What Happened, and a children’s book, The Book of Gutsy Women, which she coauthored with her daughter Chelsea Clinton.

One thought on “At Least It’s Not A Childrens’ Book”