I bet that Biden would die after two years in office so that Camel-Toe Harris can have a full two successive runs as President. It’ll be a death, too, no retirement, because he knows too much, his funeral will make excellent propaganda and he becomes ever more useful to his handlers as he approaches “persistent vegetative state”. But a funny thing about dementia, it can make your lies hard to keep straight. Or quiet.

There have been multiple recent headlines about Biden refusing to speak with foreign heads of state (notably Israel, which is consistent with Biden re-deploying troops to support CIA missions in Syria) or with governors or with… the press… or with anybody, really. His handlers even put a second mask on him in order to blame his mumbling on a mouth full of polyester. 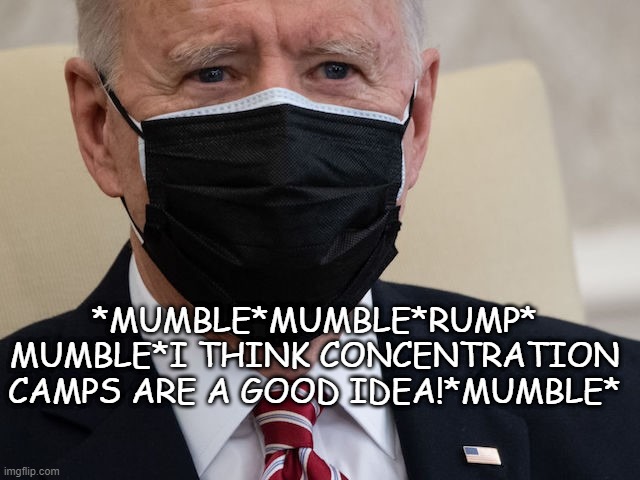 Wait, what was that?

This must be one o’ them Senior Moments that I keep hearing about.

Chinese state media did not relent in its attacks on President Joe Biden, publishing a column on Thursday accusing him of attempting to “ring-fence China,” a day after Biden appeared to justify the construction of over 1,000 concentration camps for ethnic minorities in the country.

Speaking at a town hall event produced by CNN, Biden claimed that placing Uyghur individuals and members of other Muslim-majority ethnic groups in concentration camps was a way for dictator Xi Jinping to keep the country “unified.” He claimed that he had chastised Xi on China’s litany of human rights abuses, but that the comments were perfunctory, and that Xi “gets it” that Biden is politically obligated to mention the issue.

That’s gonna be three masks on Biden, the next time anybody sees him. Maybe four.

The U.S. government estimates that as many as 2 million people remain trapped in the Chinese concentration camp system as of 2020. Survivors of the camps have testified to outrageous human rights atrocities including extensive torture, rape, evidence of live organ harvesting, indoctrination, and slavery. In a particularly gruesome account published by the BBC this month, witnesses testified to Han Chinese guards using electric batons to rape women and electrocute them simultaneously. Some women said they were forced to tie other women up to beds so that unknown men could come to the camp on a nightly basis and gang-rape them. Extensive evidence has also revealed the use of forced sterilization and abortions on Uyghur women, a tactic international legal experts accept as a form of genocide.

Abortions for me but not for thee! How can anybody still not see Original Sin?

The administration of former President Donald Trump declared the atrocities committed against Uyghurs in Xinjiang, China, a genocide, an assessment with which Biden’s Secretary of State Antony Blinken publicly agreed. Despite this, Biden himself appeared to justify the measures as necessary to keep China “unified” in the eyes of Beijing.

“If you know anything about Chinese history, it has always been the time China has been victimized by the outer world is when they haven’t been unified at home. It’s vastly overstated, but the center of principle of Xi Jinping is that there must be a united, tightly controlled China,” President Biden told CNN host Anderson Cooper on Tuesday in response to a question on Biden’s policy on Uyghur abuses. “And he uses his rationale for the things he does based on that.”

“I point out to him no American president can be sustained as a president if he doesn’t reflect the values of the United States,” Biden said. “So, the idea that I’m not going to speak out against what he’s doing in Hong Kong, what he’s doing with the Uyghurs in Western Mountains of China, and Taiwan, trying to end the one-China policy by making it forceful. I said, and he gets it, culturally there are different norms in each country, and their leaders are expected to follow.”

This is too good. Too easy.

POTUS: “It’s cool, Xi! You understand that I have to be seen opposing what you do in order to maintain my hold on power until I can build my own detention centers. So, um, there’ll be “repercussions” for your admirable attempts to achieve unity via reeducation camps. Wink, wink.”

Press Secretary: “He didn’t mean the part about repercussions. I mean, he did! Fuck, nobody told me this job would be hard!”

The friendly overture did not deter the Global Times, a state-run publication, from running a scathing piece on Thursday claiming that Biden was organizing a nefarious conspiracy to limit China’s influence in the Group of Seven (G7), scheduled to meet virtually this week. The newspaper accused Biden of trying to put “old wine in new bottles” by putting a kinder face on the anti-communist policies of President Trump.

The friendly overture did not deter the Global Times, a state-run publication, from running a scathing piece on Thursday claiming that Biden was organizing a nefarious conspiracy to limit China’s influence in the Group of Seven (G7), scheduled to meet virtually this week. The newspaper accused Biden of trying to put “old wine in new bottles” by putting a kinder face on the anti-communist policies of President Trump.

“It will not prevail easily as the G7’s perceptions about China are divided and the U.S. cannot fulfill what they need and want,” the propaganda outlet predicted, citing its stable of Party-approved “experts.” 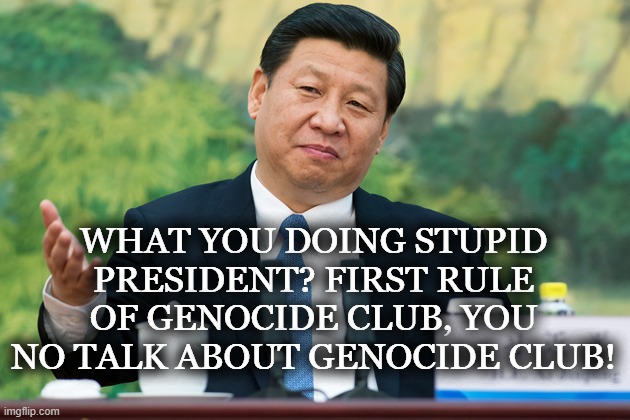 The attacks in Chinese media indicate that Biden’s overture to Beijing by justifying acts that his own administration has called a genocide have failed to change the tenor of Chinese diplomacy.

I would go a step further. If Biden continues being accidentally honest about the crimes of his international allies then a “Uighur” might just nuke D.C.. Because that’s how the game is played, Creepy Joe.

Dayumn, Joe, you even creep out genocidal despots. That’s an achievement! and rarely a long-lived one.

I’m gonna lose my bet to a Chinese hit squad.

Fun is fun but… yeah… Go Time is coming fast. We’ve theory-hammered a lot over the years about FEMA internment camps but a sitting President has just confirmed he’s the one that’s gonna do it. We must have UNITY!