Okay, okay, there might also be other reasons… but no sooner did I read the headline that Amazon CEO Jeff Bezos was stepping down (to be replaced by a Hungarian Jew) than I also saw this projected piece of… real estate. If artwork and architecture come from what we store up in our hearts then Amazon is a piece of total sh!#.

There are no coincidences!!! 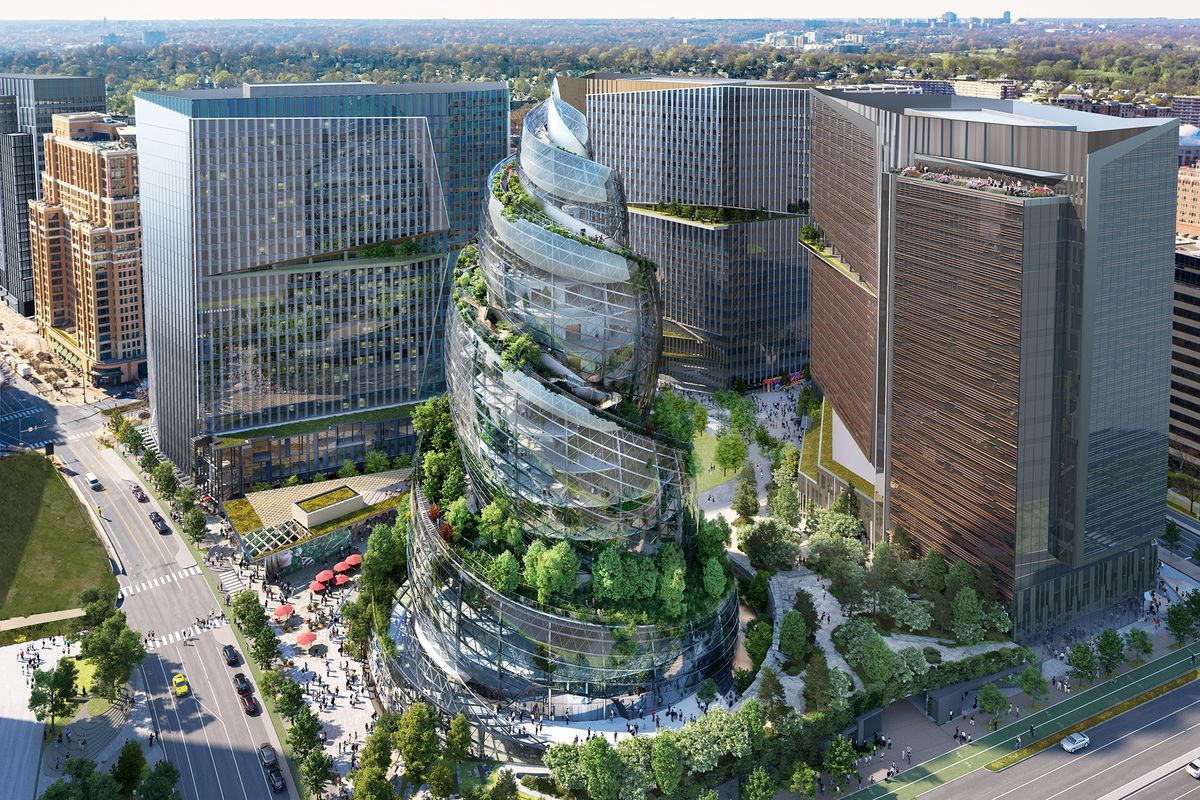 Drink it in, baby. Then squeeze it out.

Besides the innovative fecal shape, two things about this proposed building stand out. One, if climate change is real then it’s going to be underwater within a month, being that close to the bay. And two, it’s too shiny. I remember when Disney Concert Hall was built in Los Angeles:

The reflections off it blinded neighbors and melted the pavement. 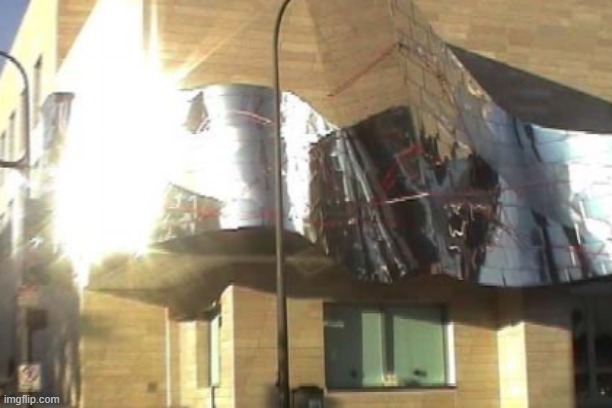 Amazon has unveiled the design for the next portion of its Arlington, Virginia headquarters, and one building stands out far from the rest: a swirling glass tower covered in trees that rises to a point above the rest of the city’s skyline. Amazon calls the building “the Helix” because its corkscrew shape is supposed to take inspiration from “the natural beauty of a double helix.”

It also — it must be said — bears a distinct resemblance to the swirling poop emoji, though with some healthier colors mixed in.

Such as fungus green!

On the inside, the Helix will be filled with a “variety of alternative work environments” that Amazon employees can use. On the outside, there’ll be two sets of spiraling paths dotted with local plants that you’ll literally be able to hike up. (Though you may want to bring a water bottle — the renders seem to show stairs along the whole route, suggesting it’s a steep path up.) The building will be 350 feet tall, according to The Wall Street Journal. Amazon says that it plans to offer public tours on weekends.

While architecture should be more than bare function, “alternative work environments” sounds like this is where the Elites will be hanging out.

Amazon has a similar standout structure at its Seattle headquarters. There, it has the Spheres, three connected glass globes filled with greenery. Its design is echoed in the similarly glass-and-green Helix, albeit at a much larger scale. 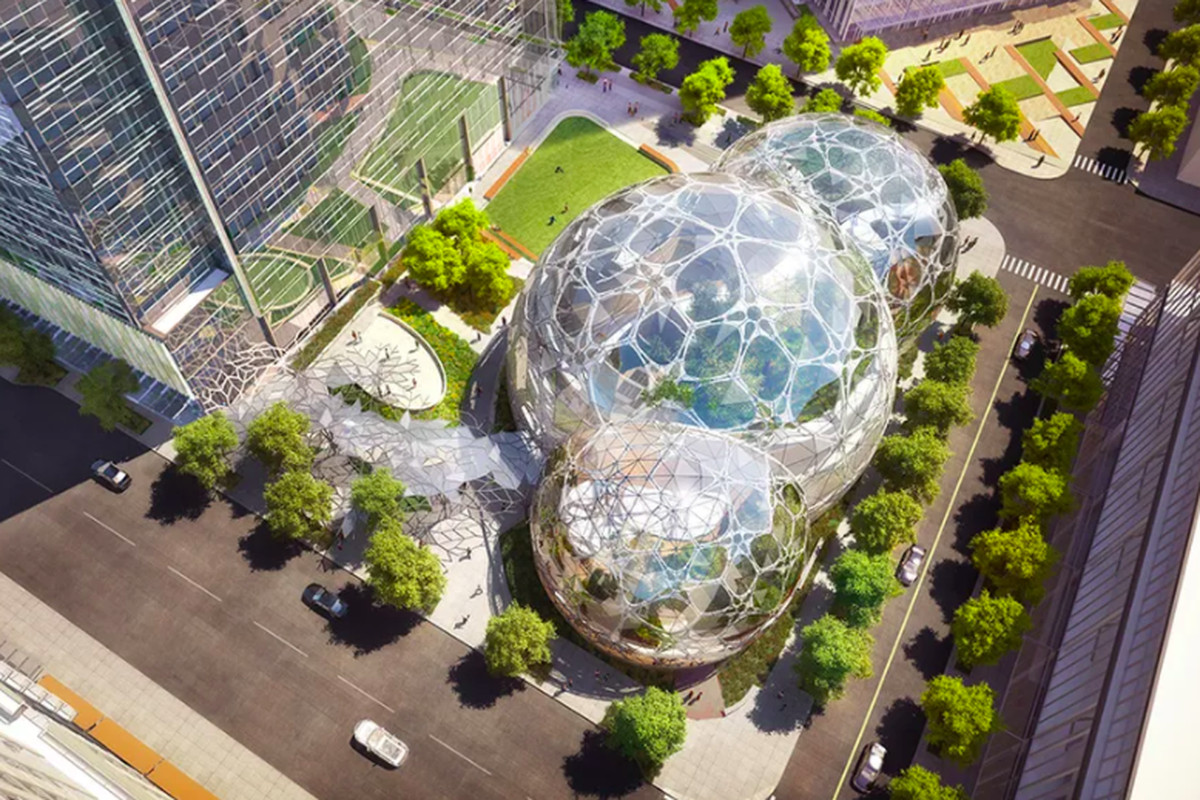 That’s a lot of glare… I sense a trend…

After seven years of planning and construction, Amazon’s mini rainforest spheres are finally opening in Seattle. “The Spheres,” as they’re known, hold 40,000 plants from 30 different countries around the world. They were designed as places employees can go to take a break or meet up with others away from their desks. … The spheres are equipped with Wi-Fi and meeting rooms with rainforest-y names like “bird’s nest.”

Even with the option to relax, Amazon will monitor how long employees spend inside the spheres via their ID badges, so no one can dominate the space or ignore tasks to spend an entire day in man-made nature.

I see the architectural theme here: Earth worship. Climate change as religion. While they’re ostensibly providing these rain forest-ish retreats for the enjoyment of the workers, they’re actually shrines to environmentalist dogma. You’re supposed to go there to worship Gaia, not to enjoy pleasant surroundings. Get back into your open-floor cubicles, minions, where your supervisor can monitor your mask-wearing at 100 yards!

The Helix is still just a proposal, so Amazon will need to get local approval before construction on the building can start. The building and surrounding campus were designed by the architecture firm NBBJ.

A New York City-centered architecture firm that seems to work mainly for BigCorp. Proud partners with the Nature Conservancy. The inner circle of the economy is a small world.

Along with the Helix, Amazon also unveiled plans for the campus around it. It’s planning to construct three 22-story buildings around the Helix. Between them, Amazon plans to create a plaza filled with green space and a dog run that’ll all be open to the public. The company is planning to make room for retail stores and restaurants, and, of course, food trucks. There’ll also be parking for 950 bicycles, according to the Journal. This portion of the campus will be located at Pen Place within Arlington’s Pentagon City neighborhood.

Restaurants for the Eloi, food trucks for the Morlocks. And I seriously doubt there’ll by many food trucks in that restricted of a waterfront pedestrian area.

The proposed Helix building is an architecturally perfect expression of Climate Change. It is unnecessarily expensive and inefficient, an eyesore to non-druids, located where it would be destroyed if climate change was real and most of all, a place where senior management can project death rays of reflected sunlight upon the luckless hives of Dirt People.