The rise in occult behavior isn’t normally a suitable topic for a public blog. People will either be put off (very prudent) or fascinated (less prudent). But when the circus comes to town despite anything you did, it’s okay to stop and stare for a minute.

A man who wants to look like a ‘black alien’ and had already had his nose removed has lost his top lip in his latest shocking body modification.

Anthony Loffredo has already split his tongue and covered his entire body – including his eyeballs – in tattoos as part of his @the_black_alien_project on Instagram. 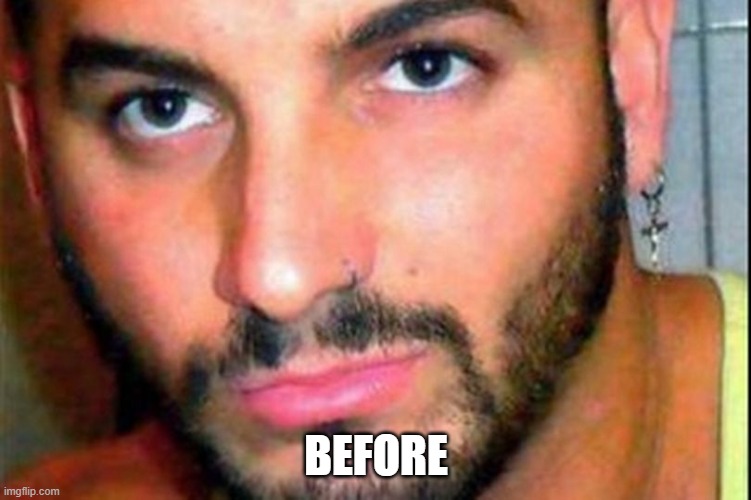 I love that crucifix earring. It makes a nice contrast to… 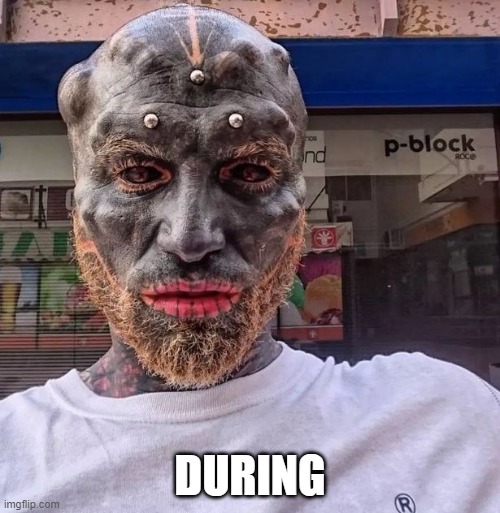 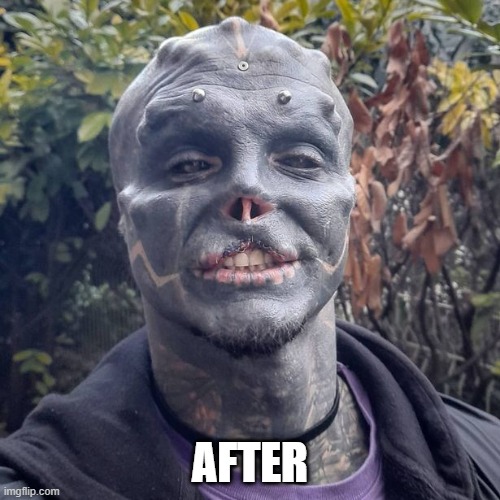 What disturbs me about these extreme body modifiers isn’t that they mutilate their body. Like the poison dart frog, their eye-catching exterior is a warning that can save me a lot of trouble. I appreciate that, you freaks! What disturbs me is they mutilate their bodies in the exact same way. Black eyes… horns… forked tongue… dark-purple skin… They aren’t trying to look different. They’re trying to look like something specific.

The 32-year-old Frenchman had his nose removed in Spain as it is illegal in his native country.

Speaking about his latest face change he did not say when he had to work done, where or by who, but did say he now struggles to speak after the lip removal operation.

He had to have known that going in. Which means he’s retreating from human contact into an internal fantasy world.

He added: “I love getting into the shoes of a scary character.

“I often settle down somewhere and play a role, especially at night in the dark streets, he has fun.

“I explore the contrast between the role I play and myself.”

During a live question and answer session on Instagram Anthony said he dreams of removing his skin and replacing it with metal.

Specifically brass? I was unable to confirm.

He said the next parts of his body to be ‘modified’ are his arms, legs, fingers and the back of his head and despite his terrifying look he has no problem attracting members of the opposite sex.

Not hooves, at least. That’s something.

In 2017 he told French newspaper Midi Libre: “From a very young age, I have been passionate about mutations and transformations of the human body.

“I had a click when I was a security guard.

“I realised that I was not living my life the way I wanted. I stopped everything at 24 and left for Australia.

While physiognomy didn’t pan out for me, I still think there’s something to be said for the possibility of internal corruption manifesting externally. To that end, perhaps France is wrong to outlaw self-mutilation. It allows the deranged to out themselves for easy identification and containment.

4 thoughts on “He DID Cut Off His Nose To Spite His Face!”