Social media drastically decreases the communication distance between any two people. While this ought to be axiomatic, the reality didn’t sink in for me until I wanted a sandwich for lunch yesterday and got scolded for not wearing a face covering that had been acceptable just last week. It has slowly dawned me, living here in Hotel California, that most people were obsessed with monitoring every hiccup and burp to emanate from every layer of government that has anything to say about Wuhan Flu. Seven layers of government, last I checked. City, county, two State-level, Federal, CDC/NIH and WHO. Do these people have nothing better to do? Are they truly that traumatized at the idea of missing… 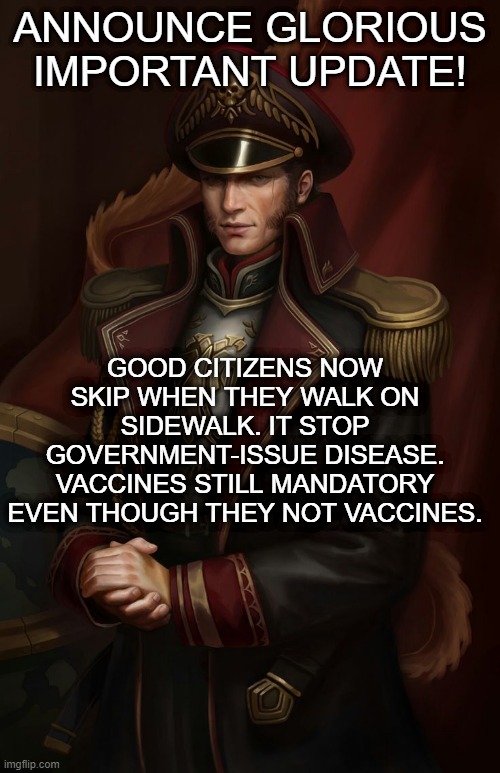 It finally dawned on me that all of these people simply signed up for hourly updates from Coof Central. That’s how much I’m NOT on social media. I even noted Trump’s use of Twitter for official business and while I scoffed at it, I never connected the dots between his energized fan base, him and his use of social media to access them directly.

The coming technocracy is different from bureaucracies past because there’s no gap between an edict’s creation, distribution and enforcement. Our rulers can rule in real-time. Governor Newscum can ride down the street in his limousine, see a behavior he doesn’t like, pull out his smartphone, write a new law and fifty million residents plus all levels of law enforcement will be notified of it within two minutes.

This combines with the current ‘Murican attention span of “nil” to create a situation in which most people, meaning slutphone addicts, have no homeostasis, no daily routine, no past or future, except checking with the government every morning for a short list of acceptable behaviors for the day.

Government is no longer a uniform standard nor a bureaucratic kleptocracy. It is dozens of petty kings throwing a temper tantrum with millions of people in the throne room who are eager to please him because they fear being punished for a crime that didn’t exist TWENTY SECONDS AGO and might not exist a minute later.

So then, this is how the West went Covidian Cult. First society was feminized to the point that experiencing even painfully negative emotions is preferable to sober-minded self-control, then the cult leaders gained direct access to their followers via social media. The manipulations have no limits. The tests of purity and loyalty can be administered 24-7.

California’s Governor Newsom was quick to adopt this “New Normal”. He built a permanent lockdown bureaucracy, which he even called a “light-switch economy”, in which he can swiftly dictate the openness of the economy based on a model that no expert can understand except Newsom himself.

California Gov. Gavin Newsom has from the start said his coronavirus policy decisions would be driven by data shared with the public to provide maximum transparency.

But with the state starting to emerge from its worst surge, his administration won’t disclose key information that will help determine when his latest stay-at-home order is lifted.

State health officials said they rely on a very complex set of measurements that would confuse and potentially mislead the public if they were made public.

And that’s coming from the hardline-Marxist Associated Press. I’ll save you the trouble of looking: the latest “Recall Newsom” effort just passed a milestone in gathering signatures, so he’s trying to reduce We the People’s motivations for wanting his ass canned.

While no mere mortal can hope to understand the God-Governor of Hair Gel’s genius, here is one of his system’s known inputs:

California health officials have added a new metric for assessing whether counties are doing enough to contain the spread of COVID-19. A new “health equity metric,” effective Tuesday, will examine rates of infection in communities that have been disproportionately affected by the coronavirus.

“Low-income, Latino, Black and Pacific Islanders have been hardest hit” by the pandemic, said state epidemiologist Dr. Erica Pan in a presentation Tuesday.

The new metric assesses the rate of COVID-19 infections in census tracts that have been identified as having less healthy conditions, as measured by the Healthy Places Index. The index generates a score based on factors such as access to health care, housing density, crowding and air pollution.

So, white people who live clean will not be permitted to live any freer of disease than illegal immigrants who turn their neighborhoods into ghettoes and barrios. Lovely.

…The vaccination program that Newsom promised is seemingly bogged down. Newsom said Monday that 783,436 doses of vaccine had been administered, 31.6% of the 2.5 million it had received from suppliers. However, that’s below the national rate of 36% and, according to a Bloomberg survey published on Monday, one of the lowest rates of any state.

Although California had spent months planning the vaccination rollout and had adopted a seemingly bulletproof priority list, with health care workers at the top, in practice it has lagged behind expectations.

If this was a real vaccine then it’s the elderly who would get it first; they’re the ones most at-risk. Instead, it’s the government agents, er, “essential workers” who are getting it first. But I digress.

How could this lag happen? Was there ANYTHING else that the government has been obsessing over daily for the last year?

One factor, apparently, is a software program that isn’t working as expected.

“The network is down” is the best excuse he could find? He’s a professional liar, for pity’s sake!

“California’s COVID-19 vaccine rollout is being at least partially slowed by technical problems with a software program used by the state to coordinate vaccine distribution,” the Los Angeles Times reported last week…

The stumbling vaccination program is — as it should be — highly embarrassing for Newsom.

It isn’t. Newsom is afraid that the injections might actually work, therefore is only distributing them to people that the government has deemed ‘essential’. In fact, I was offered the jab as a volunteer firefighter last week and there’s just no way I can be a legitimately higher priority than, well, anybody else. (Alas, they didn’t let me scalp my seat.)

Fascism has never been so… pure. The State is no longer confined to Moscow. The State is now, and I forget who said it first, your borderline-personality girlfriend ordering you to stop your life and pay attention to her anxieties.

One thought on “Only One Degree Of Separation”