Behold the inevitable, realized consequence of Churchianity: a prostitute grown shameless by indulgent parents and clergy whose only consistent belief is female empowerment.

Christian OnlyFans model who rakes in $200,000 a month insists that religion does not ‘interfere’ with stripping off for money – and says her equally devout parents are ‘so proud’

However did we reach this point? when tabloid pundits understand Christianity better than the people who profess it? Like a faithful Catholic wanting to scourge the abortion-hypocrites off Holy Ground, I want to kick some serious ass today. No perv in that, either; while this prostitute does have a ginormous moneymaker, her reputation has preceded her.

The model, 22-year-old Lindsay Capuano, reportedly rakes in $200,000 per month selling photos of herself in which she takes off her clothing.

Capuano’s Instagram page boasts a following of more than 2.4 million. 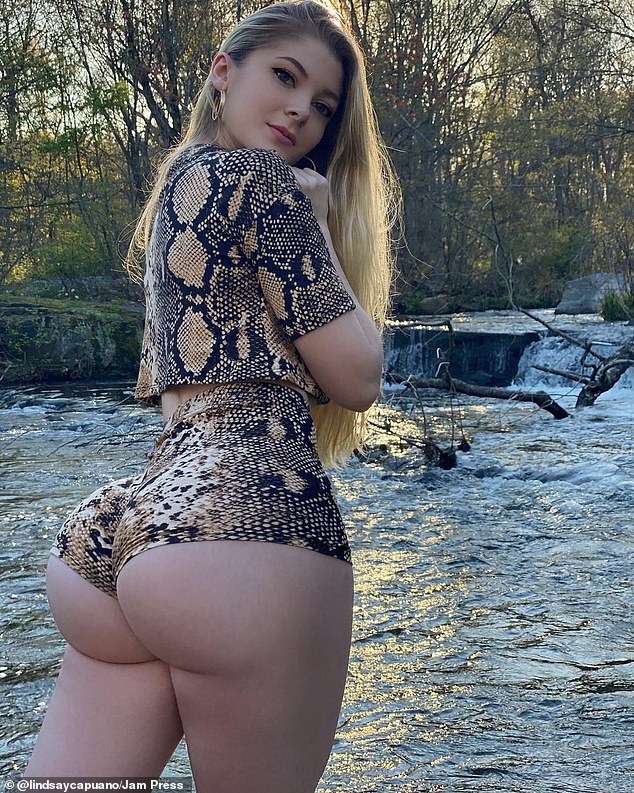 I’ve been following Sigma’s work on the Online Amateur Sex Industry but still can’t grok men paying that much just to be smiled at, or tipping megabucks for the privilege of additional pictures of a female caboose. Link for the interested:

“God will love you no matter what,” she reasoned of reconciling her faith and her profession. “That’s what I was taught in my household, school, and church. I pray every single night. I pray for whatever I feel I need to that day. I pray for family, my fans, myself.”

I believe her because this attitude is everywhere. Christianity has been reduced to “God Wuvs You!” It’s all forgiveness, all wellness, no judgmentalism or standards. There’s not even a difference between Greeks and the synagogue of Satan!

Capuano said that her family is Christian but “very laid back.”

“My religion has never interfered or stopped me from doing anything I’ve wanted to do,” she added.

THEN YOU DON’T HAVE A RELIGION. Certainly not Christianity, chock-full of warnings against sexual misconduct. If there’s nothing you do specifically because of your beliefs then you don’t have any beliefs. Only an id that seeks pleasure and avoids pain like a dull-witted animal.

Lindsay previously worked at a Christian daycare center but quit her job after deciding to focus on social media and OnlyFans full-time.

She said: ‘Throughout the summers of 2016 to 2018, I worked at a private Christian daycare. I actually loved the job and I really enjoyed working with the children. But when things started really taking off last summer on Instagram and Snapchat, it didn’t make sense to go back.’

She said that her Christian parents are very supportive of her decision and join her in celebrating her achievements, including reaching two million Instagram followers.

Her Christian parents need to be publicly tarred and feathered so their bodies match their morals.

She admitted that she feels extremely lucky to have such accepting parents, who have always taught her that God will love her no matter what she chooses to do.

I’m not a fan of the Sin of Presumption, the idea that knowing you’re pre-forgiven makes it easier to commit sin. My view is that you are pointed at one of two worlds, the mortal or the spiritual. The reason a Christian hates sin is not merely because it’s verboten… it’s because that’s not who he wants to be, an attitude that can be held even during an act of sin. God’s morality doesn’t exist in a vacuum. The proper motivation is this isn’t the way things are supposed to be rather than Sky-God is gonna smite me. Although the latter is a decent place to start.

Conversely, anybody who positively enjoys doing wrong has problems far worse than thinking God’s a chump. Lindsay Fat-ass-ay being a case in point.

Lindsay explained: ‘My parents are supportive of whatever I choose to do. They have always been that way. ‘They are so proud of me, we celebrate every time I reach another million followers on Instagram.’ I’m blessed to have the family I do. I know a lot of parents aren’t as accepting as mine, so I consider myself to be very lucky and never take it for granted.’

The model currently earns around $6,600 a day from posting her half-naked photographs online, but rakes in most of her income from fans who give her tips. She said: ‘I have multiple amazing fans who tip me $1,000 to $3,000 every day, sometimes.

I never would have guessed that social media would be the harbinger of the Sex-pocalypse, allowing women to get attention from a near-infinite number of men. Removing middleman speedbumps at the same time was merely a +1 to that.

But modelling is not Lindsay’s only passion, as she also hopes to pursue a career in singing in the future.

She has posted videos of her singing on YouTube and Instagram since she was just 14 years old and plans to devote more of her time to her music.

Lindsay added that the COVID-19 lockdown has helped her keep her focus on her singing, and even teased that she is currently working with an award-winning producer.

Early exposure to male attention is an excellent reason to block girls from the Internet until her wedding day. Meanwhile, her singing career is DOA. Men aren’t giving her $3k tips for hearing her voice.

But she might marry that producer. I saw it happen all the time in Los Angeles.

Well, we’ve hit bottom. Church-going parents think they’re doing the work of God by raising their daughters to be literal Whores of Babylon. Even the Godless point and stare at the half-naked hypocrisy.

Something something rods and whips.

13 thoughts on “A Christian Whore Of Babylon”