Sovietman made a good point of not bothering about the hypocrisy of our enemies. Regardless, I can’t resist fisking a Canadian bureaucrat named Bond who tweeted smack about pickup trucks then cried when people pointed out his tiny dick. 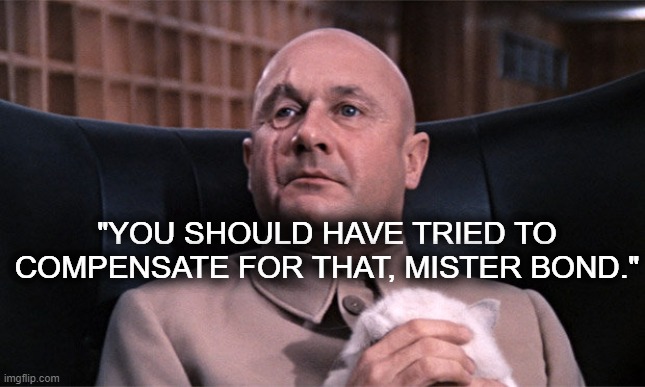 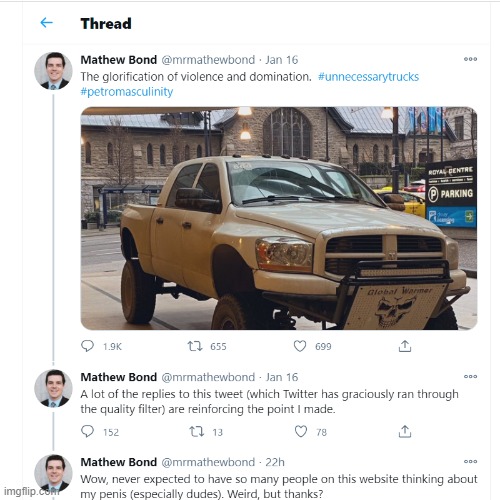 The bumper reads “Global Warmer” with a grinning skull. Somebody was triggered!

Tweet 1: “Your pickup truck is violent and dominates wymmyn!”

Tweet 3: “You’re all fags because I really do have a dick!”

Elites make a point of hypocrisy because it demonstrates how powerful they are when they get away with it. Implicit in that, Mister Bond, is your being able to get away with it. *GunnerQ snaps on his fisking gloves*

A politician who serves as a North Vancouver, Canada council member triggered outrage on social media after he posted a picture of a large pickup truck on Twitter and captioned it, “The glorification of violence and domination. #unnecessary trucks #petromasculinity.”

The truck, which had a large plate attached to the front reading “Global Warmer,” catalyzed Mathew Bond to slam it for its dismissive attitude toward global warming. After blowback ensued from his tweet, Bond launched a Twitter thread addressing the issue in which he accused some of his critics of mocking him as unmanly, while he speculated that some of the owners of similar trucks were trying to prove their masculinity.

The smarter hominids quit digging upon realizing they’re in a hole. Here’s the continuation of his self-immolation by Tweet:

[Bond Wrote,} “Trucks are necessary in many rural areas. Designing or modifying them to be more dangerous to others than they already are is unnecessary.”

Jacking them up actually makes them LESS dangerous to others because their bumpers can’t hit stuff anymore.

“Glorifying global warming, when millions around the world are suffering from its impacts, is sad, harmful and disgusting,” he continued. “Since everyone seems to be enjoying this pile-on, here’s a few more things you might enjoy as you head into the week.

The fact is that trucks (all vehicles in fact) are being designed larger and more powerful than they have in the past. Pick your favourite light or mid duty model and compare today’s version to that of your parents (or grandparents if you’re young).”

My uncle has a story about a large tree collapsing on his truck in a windstorm. The tree broke over the cab and Uncle pounded the dent out of the all-stainless-steel frame with a sledgehammer. 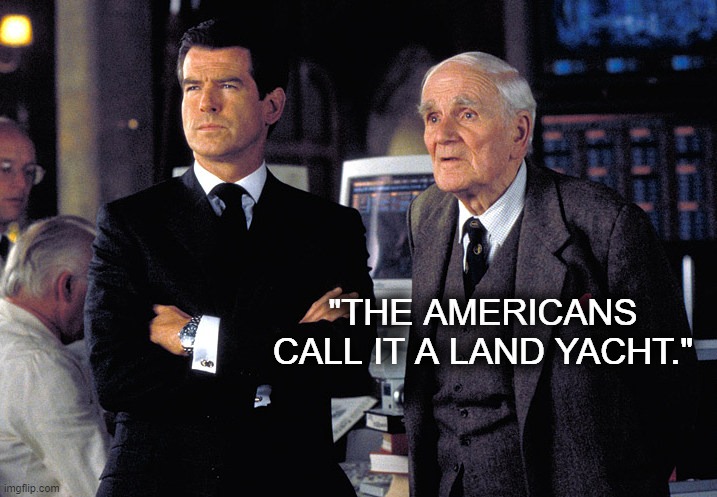 “The design, specifically the size and height of the front of the truck, is more dangerous and can cause more harm to others on the road than it used to,” he commented. “Lift it up 6″ inches plus, put a big bull bar on front, and the affect is amplified.”

What a fag. “It’s dangerous to own more truck than you need! I get to decide what you need because I’m a government official…and I get scared easily!”

He means “more harmful to me when I inevitably crash in my tiny Prius that doesn’t need any cargo space because I own nothing and am happy and don’t have a job that requires ANY kind of manual labor!”

He turned to accusing his critics of misogyny: “And that a man that has thought about the impact of the size and mods on these trucks, or who cares about the harm that global warming is having on people around the world is a sissy, a p*ssy and a girl (as if being a woman is an insult). The misogyny is pretty disgusting.”

He concluded: “The mental leap from ‘the message on the truck is harmful, glorifying global warming is violent and the size/mods on this truck make it more dangerous for others on the road’ to ‘Mathew is a d***less, ball-less, spineless, soy latte drinking, city living p*ssy who’s never done a day of ‘real’ work in his life, sits down to pee, hates all trucks, the hard working people that drive them and wants to control our lives’ actually illustrates the toxicity I was mentioning in the hashtags better than anything I could have done myself.”

Boldfaced for truth! And he said it himself.

One thought on “The Name Is Bond. The Hashtag Is Petromasculinity.”