As the flurry of dramatic headlines finally slows, it’s Gunner time! Let’s have a look at Ashli Babbit, the woman who was fatally shot while bashing her way into the Capitol building instead of quietly standing in line a couple entry doors over. 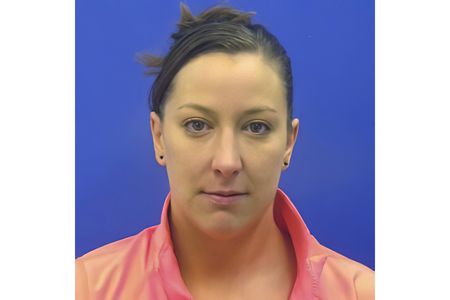 Her Calvert County, Maryland driver’s license. However, she was reportedly living in San Diego at the time so I’m not sure of the date.

Ashli Babbitt is a San Diego-area Air Force veteran who was identified as the woman who was shot and killed as people rushed the U.S. Capitol building in an unprecedented scene that included the vice president being rushed to safety, reports of gunfire and IEDs, and people roaming around the chambers of the U.S. Senate.

More specifically, she’s a veteran of the 113th DC Security Forces. The military wing of the Capitol Police, I presume, which means she knew where she was going inside that building and probably had inside information to plan… whatever she’d planned.

Date: 02.15.2014
JOINT BASE ANDREWS, Md. – Nearly 30 airmen of the 113th Security Forces Squadron departed for a five-month deployment to an undisclosed location in Southwest Asia Feb. 15.

While deployments are certainly not unusual, what makes this one unique is the range in experience shared among the airmen. In fact, this deployment will be the first for more than 10 of the security forces airmen of the District of Columbia Air National Guard’s 113th Wing.

“I’m very excited for my first deployment,” said Senior Airman Cordero Santiago. “I volunteered to deploy because I wanted the experience and I feel prepared.”

Senior Airman means E-4. First deployment at that rank suggests he joined the ANG to pay for college.

Santiago credits his confidence in his preparation for this deployment to his time spent at the intensive two-week Regional Training Center at Eglin Air Force Base, Fla., where training included small group tactics, weapons sustainment and mounted operations.

Like Santiago, many of the newer airmen have since gained confidence and a better understanding of what to expect of the deployment, said Tech. Sgt. Jose Perez, one of the two squad leaders of the deploying unit. And thanks to deployment veterans like Perez, for whom this will be his sixth deployment, the newer airmen are in good hands and have the opportunity to seek mentorship and advice from those who have deployed on numerous occasions such as Senior Airman Ashli McEntee.

Ashli Babbit was McEntee back then. I’ll cover her sordid love life soon!

Since joining the Air Force eight years ago on active duty, McEntee has deployed seven times. This deployment with the 113th SFS will be her eighth total deployment and her second since joining the DCANG. While preparing for deployment here and at Eglin AFB, she also found herself in a mentoring position to the younger and newer airmen for whom this will be their first time “down range.”

“The newer airmen have been coming to us and asking about the living conditions, the weather, the gear, the schedule, how we work as teams, the hours we work,” McEntee said. “As we have a large amount of first timers deploying with us, I think we can offer comfort and knowledge.”

Mentoring can mean a couple things. Being E-4 in the Guard means McEntee was more likely a back office trainer than a snake-eating trigger puller. Especially if she failed to make E-5 after seven deployments; I’m military-illiterate but deployments tend to be the way to get promoted at the lower ranks?

This video makes me doubt that 113th is a serious unit:

A graphic live stream video showed Babbitt lying almost motionless on the ground inside the Capitol building as supporters of President Donald Trump milled in a hallway and roamed around the chambers of the U.S. Senate. Babbitt’s husband told KUSI-TV in San Diego that she was a “strong supporter of President Trump, and was a great patriot to all who knew her,” in the words of the station.

It was a tweet, not a phone call or interview.

Is this mic still hot?

…that believes pedophiles are embedded in high-ranking governmental positions. 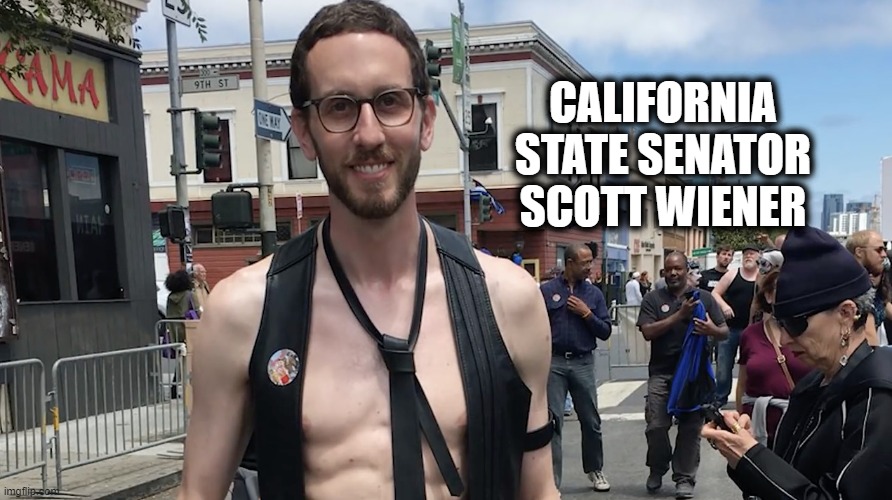 “Nothing will stop us….they can try and try and try but the storm is here and it is descending upon DC in less than 24 hours….dark to light!” she wrote. She had retweeted QAnon accounts and former National Security Adviser Michael Flynn.

Well, that settles it. Tweeting veiled threats of violence with specific timelines on a public forum is the exclusive behavior of Trump supporters.

One photo on Twitter showed her wearing a MAGA hat…

An armed standoff took place for a time outside the U.S. House front door on the afternoon of January 6. The mayhem unfolded as Congress met to certify the results of the 2020 presidential election. Earlier in the day, President Donald Trump held a rally at which he railed against the election results, falsely labeling them a fraud and declaring himself the victor. Even Republican officials in various swing states have declared that Trump did not win the election after conducting audits and investigations.

No joke, the Left has lost its mind. The sufferers of Trump Derangement Syndrome have been driven into a feeding frenzy at the sight of Donald being vulnerable.

Based on their social media accounts and live streams? 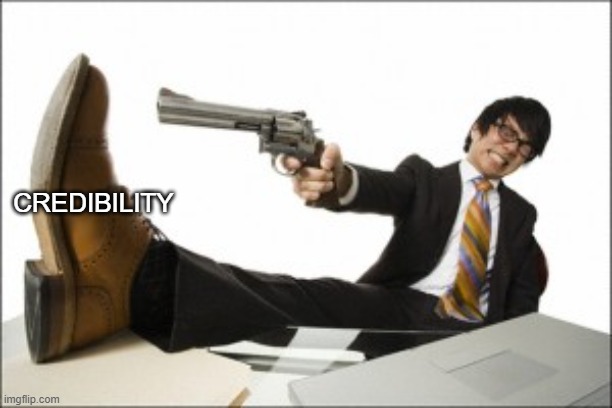 According to KUSI, Babbitt was “a 14-year veteran, who served four tours with the US Air Force, and was a high level security official throughout her time in service.”

Per masslive, link below,

The Air Force said Thursday that Ashli Elizabeth McEntee was on active duty from 2004 to 2008, most recently at Dyes Air Force Base near Abilene, Texas. She was also member of the Air Force Reserve from 2008 to 2010 and the Air National Guard from 2010 to 2016.

I don’t know her exit rank but that E-4 would’ve had to get promoted really fast to end as a “high level security official”.

A man from New Jersey spoke to a journalist and said he was an eyewitness. He had a bloody hand. “We had stormed into the chambers inside, and there was a young lady who rushed through the windows. A number of police and Secret Service were saying get back, get down and get out of the way,” he said.

An obvious crisis actor. Had he been actual MAGA confessing to media that he’d stormed the Capitol, he would have already been doxxed on national news, arrested, charged, fired from his job and placed on the national no-fly list.

None of that is hyperbole. Here’s what I’ve pieced together. At one location, Capitol police stood down, opened the doors and let Trump supporters in. Video shows they acted like tourists, gawking at the scenery and walking in a mostly-straight line into the main chamber.

Simultaneously, a small group of probably Antifa types, led by DC military police veteran Ashli Babbit, smashed entry at a different section of the Capitol building where various reports placed VP Pence. This was after Pence betrayed Trump by accepting electors based on the fake election results. A team of uniformed DC police followed Ashli’s group but did not intervene until she got shot.

My pet conspiracy theory is that Babbit was leading an Antifa cell to make a martyr of Pence now that his Judas deed was done, with some peaceful MAGA people allowed inside to take the blame. The police unit behind her was intended to “cut out” Ashli’s team. Unfortunately, one DC cop either didn’t get the memo to allow the assassins inside or was wrong place, wrong time, and barricaded the doorway. Either explains why Ashli was willing to ignore his threats to shoot with the handgun pointed at her.

I have trouble posting video on my blog. Having seen the footage, however, there are two remarks I’ll make on it. One, the DC police was just a few feet behind her and neither aggressively interfering with her bashing on the makeshift barricade or panicked over actual gunfire twenty feet away. Two, one of her peers–he wore a blue Giants hoodie and was standing next to her when she was shot–turned around and pulled out a smartphone to shoot video of her while standing in the line of fire of the cop who’d just opened fire. Bovine dumbassery at its finest. 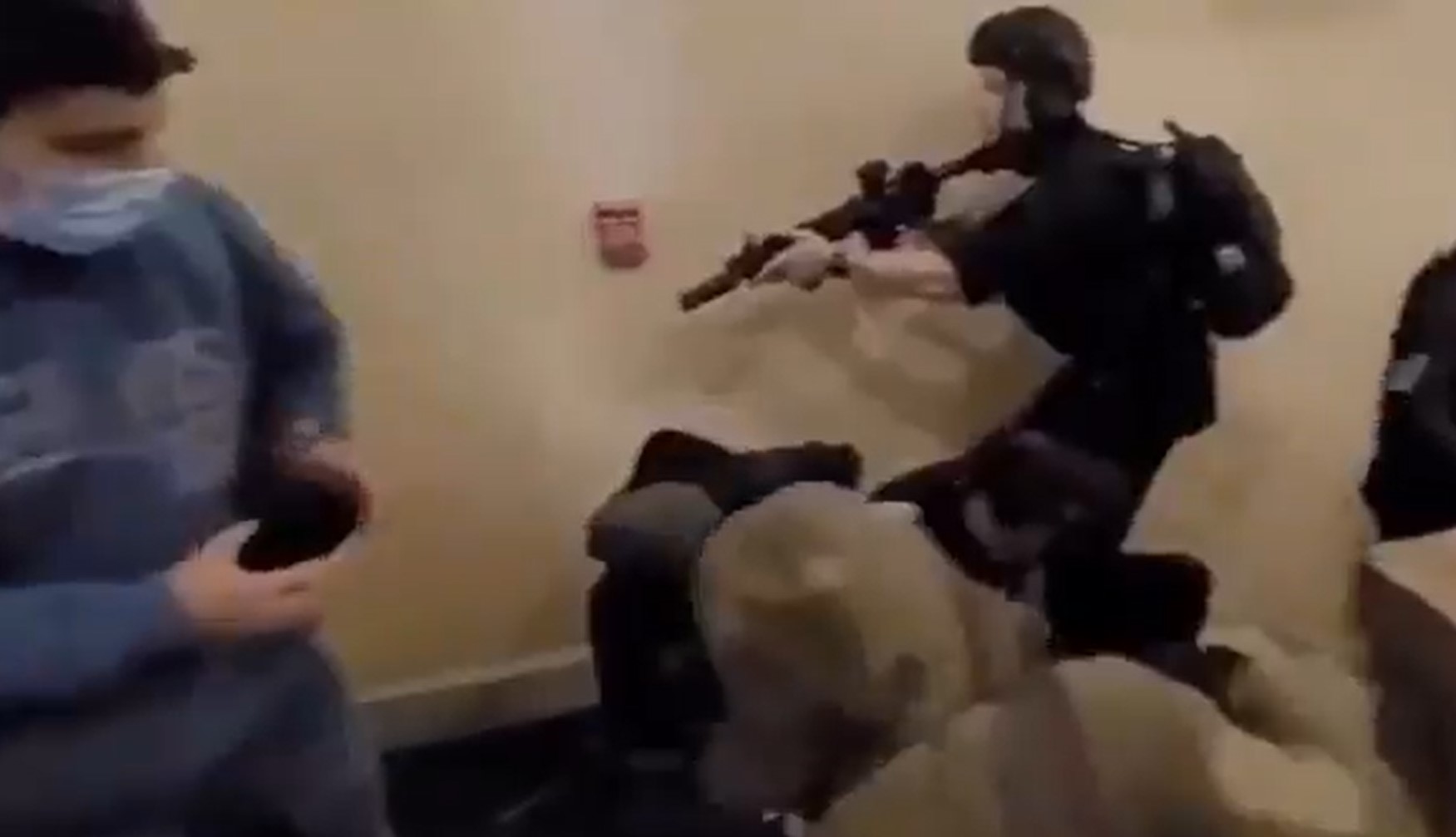 That’s Bovine on the left.

Ashli Babbitt — the pro-Trump rioter shot dead while trying to breach the barricaded House chambers — had been accused, then found not guilty, of reckless endangerment, malicious destruction of property and tampering with a car in 2016.

The 14-year Air Force vet was prosecuted under her previous last name of McEntree, according to court documents from Calvert County, Md., where she lived at the time.

The Maryland public court records show police found probable cause for the string of charges, which are not described but were somehow connected to a “traffic case,” the records show.

Two restraining orders had also been issued at the time, but appear to be separate from the criminal case.

As liberal as Maryland is, multiple retraining orders against the wife indicates serious psych issues.

A petition for divorce was filed by Babbitt’s then-husband, Timothy McEntree, in 2018, records also show. The divorce was finalized in 2019.

More specifically about that divorce…

Babbitt’s ex-husband, Timothy McEntee, called her a “wonderful woman with a big heart and a strong mind” in an email to The San Diego Union-Tribune. McEntee said he and Babbitt were married from April 2005 to May 2019. 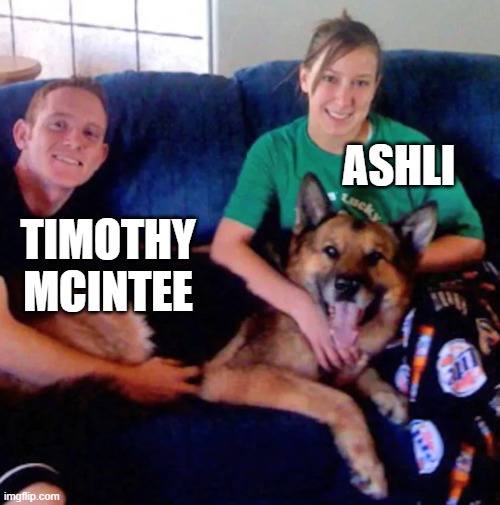 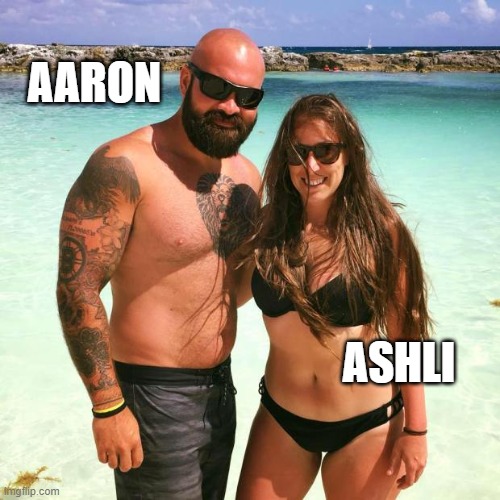 And this time, SHE was the pool boy!

“Mask Free Autonomous Zone Better Known as America,” read a large sign on the front door of a pool service business she ran with her husband in Spring Valley, near San Diego. No one answered the door Thursday at the business or the couple’s home, a modest duplex in San Diego.

Per the Sun, “It is unclear what Aaron does for a living.”

That monkey-branching psycho bitch! Let’s not lose any sleep over Ashli’s dirt nap.

16 thoughts on “Analysis Of Ashli Babbit”