My recent posts on the topic made Totalism sound like it’s every form of atheism ever. To be sure, all the elements are there–treacherous leaders sending brownshirts against Designated Enemies in order to impose their beautiful, humanist Utopia du Jour. Indeed, it is much like a denomination of atheism… but more of a cult, because it is atheism taken to such a harsh extreme that other denominations such as anarchists and Communists cannot tolerate it for long.

For example, there are many atheists who would be appalled at the idea of permanently rewriting history for a momentary political talking point. Who believe that dissidents sometimes do have legitimate criticisms and even if they don’t, are still fellow people. Some of them even believe in the existence of objective truth. God has given consciences even to unbelievers.

Not so the Totalist. Or in today’s example, the Branch Covidians ruling Los Angeles that I just escaped from (once again!).

Los Angeles County Public Health Director Barbara Ferrer said this week that Los Angeles County residents should follow new, even more strict guidelines amid the COVID-19 pandemic in order to tamp down the community spread of the deadly virus.

In a Tuesday report from the Los Angeles Times, Ferrer said that people run the risk of contracting COVID-19 by just leaving their homes.

Oh yeah, baby. They ain’t stopping until there’s nothing left.

“Everyone should keep in mind that community transmission rates are so high that you run the risk of an exposure whenever you leave your home,” she explained. “Assume that this deadly, invisible virus is everywhere, looking for a willing host.”

So much for masks being essen… WHAT SHE SAY?

Willing host? Barbie, that is not how diseases work. That is how the voices in your head work. 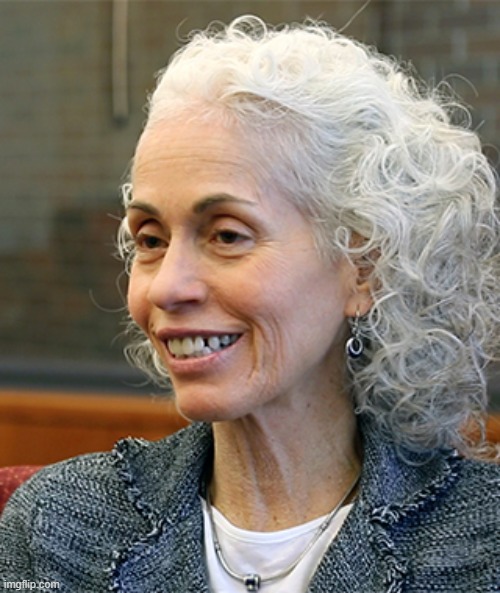 Seriously, how is that the mugshot of a health director for a major city?

The Times reported that “the risk of getting coronavirus in Los Angeles County has never been greater” with approximately 1 in every 5 residents testing positive for the virus.

Problem: I was there and they aren’t even testing 1 in 5 residents, let alone getting that many positive results.

“The anticipated surge from the winter holiday gatherings is done,” Ferrer added. “And tens upon tens of thousands of people are paying the price with new COVID-19 infections. The increases in cases are likely to continue for weeks to come, as a result of holiday and New Year’s Eve parties and returning travelers.”

“It’s better to be lonely than to be sick. It’s better to care for others by following all the rules than to end up passing along the virus to someone who gets hospitalized or even dies,” Ferrer added.

Who the fuck is this bitch ordering me to be lonely until she decides I get to have friends? Pure Totalism is on display here.

Officials have said the latest coronavirus surge was caused in part by holiday gatherings, beginning with Thanksgiving and then Christmas and New Year’s Eve. Infections linked to the latter two holidays will be apparent later this month, further jamming overwhelmed hospitals.

Statistics to be invented as needed.

Workplaces have also been increasingly spreading the virus. Costcos, Targets, Walmarts and grocery stores have seen outbreaks, as have a variety of other job sites, including some TV production sets.

WHOA, NELLY. Read that again. From the very beginning, big box retailers have been given favorable treatment. This is the first time I’ve seen the Covidians call out fellow atheists for insufficient devotion.

Furthermore, Hollywood was shut down until their lobbyist went to the infamous French Laundry dinner with Governor Newsom to bribe him into granting permission for reopening. That “including some TV production sets” is a shot across the bow of a hardline socialist governor that up until now, was their ally.

You see why I call them Totalists. Newscum wants his bling and Big Butt Business wants a monopoly, but the Totalists want civilization to burn.

The Totalists are turning upon their own allies in rage over Normies celebrating the holidays, specifically including Christ’s birthday. Happy Birthday, God, and happy birthday again: we your children bring you some freshly gnashed teeth from your enemies!

…their Narrative is failing.

Anti-mask protesters aggressively approached shoppers at a Ralph’s grocery store in Los Angeles’ Century City neighborhood and then moved to the nearby Westfield mall, leading to minor altercations and the police at times intervening.

The protest, captured in a series of videos from a Twitter thread Sunday and livestreamed by the protesters, took place as Los Angeles COVID-19 cases soar, as safer-at-home orders remain in effect and as Southern California ICU are stuck at 0% availability.

“This thread is so embarrassing to the human race,” filmmaker Judd Apatow said in a tweet.

Who? *checks* A Jew from NYC who made The 40-Year-Old Virgin and Trainwreck, among others you’ve probably seen.

At the Ralph’s grocery store, one female protester falsely claimed a man hit her and began pursuing the man with a shopping cart as other protesters shouted. The woman then was seen kicking the man. Another protestor called a shopper a “mask Nazi” and said he didn’t have to wear a mask because he had tested negative for the virus.

The protest then moved to Bloomingdales and other stores throughout the Century City mall. Protesters were asked to leave various stores and had a brief dance party to the tune of YMCA in the corridors. When one shopper says that her father was in the hospital with COVID-19, the man shouted back that, “People die. Your father’s not special.”

The Twitter thread concludes with a video of one woman appearing to be detained. LAPD officer Rosario Cervantes told TheWrap that police were present on site to keep the peace and maintain First Amendment rights and that individuals entered each location without masks. No arrests were made, but battery reports were taken, one at each location.

One last post to illustrate how Totalists never stop.

The city of Manhattan Beach, California, is really worried about a recent spike in COVID-19 cases. In fact, city fathers are so worried that they have issued a new edict for their subjects: No sitting on public property.

That’s right: Residents will no longer be permitted to use the city’s seating on publicly owned lands — the officials had all of the seats removed this weekend, the New York Post reported Sunday night.

The coastal city, located about 20 miles south of downtown Los Angeles and inside L.A. County, saw its number of confirmed COVID-19 cases nearly double over the last two months.

So city officials decided it was time to take action. That action came in the form of a sitting ban. As of 10 p.m. Sunday night, all outdoor seating on public property was closed to the public. The tables and chairs were removed until further notice.

Mayor Suzanne Hadley said in the tweeted statement from the city, that people should stay home — except to go to work, pick up “essentials,” or exercise.

There was no word from the city on where people outside exercising might sit and rest if they need a break.

This isn’t about exercise. It’s about punishing the little people for lack of devotion.

But officials who have helped cripple local businesses with their restrictions were quick to encourage citizens — whom they simultaneously told to stay home — to go out and support “our local businesses that are offering pick-up, curbside, take-out, and delivery services.” 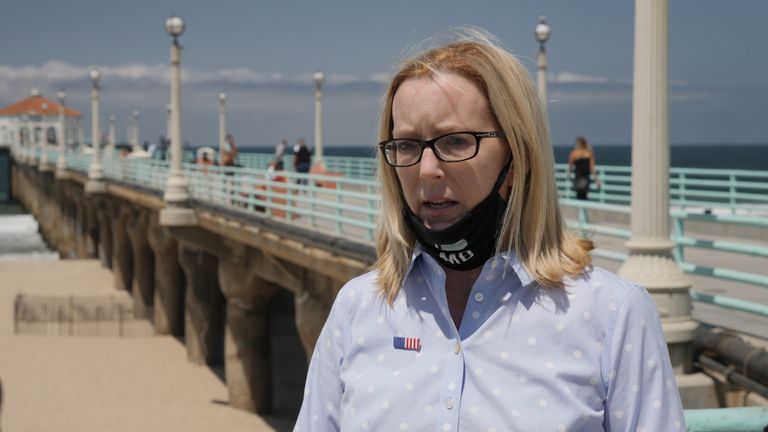 Mayor Hadley looks exactly like what I expected. Her words illustrate the Totalist thought process:

“We must continue to respond to the ever-changing dynamics of this pandemic.”

“This recent spike in the virus is significant, despite the good news last month of our Manhattan Brach firefighters receiving some of the first COVID-19 vaccinations… Although public seating areas will be closed temporarily, please continue supporting our local businesses…”

Demand for purity. You aren’t doing enough to support the Narrative!

“With a new mutant strain of COVID now present in California, which is reportedly more easily spread than the original virus…

and less virulent, even per official reports…

“…we must continue to strive to reduce virus transmission.

The science is settled! There is nothing to discuss but how we respond to this urgent, life-ending threat.

“Please continue to support one another by wearing face coverings, maintaining a safe distance, staying home as much as possible and not sitting when you are able to stand because even though your butt crack is completely masked, chinaballs can zoom around your clothing and up your ass. Unlike when you wear underpants on your face oops, I mean, supporting our local businesses…”

She didn’t actually say the boldfaced but she did imply it.

Atheist uprisings tend to have two prongs, one group trying to achieve a particular goal and the other group living in the moment of pure, infantile Godlessness. They might be peers, as we see now with the globalists and the Covidians, or chronological such as the Reign of Terror interrupting the French Revolution.

It is fitting that atheists should be the ones who, in horrified desire for survival, are the ones to suppress the ugly reality of unchained Godlessness. They need to see the endgame of their beliefs… and having seen the darkness, perhaps a few of them will seek the light.

By all means, Covidians, keep threatening the governor’s meal tickets. Keep accusing Chinamart of spreading plague. Tell the people they won’t even be allowed to sit until they do as they’re told by the Prophets they’re already disobeying. See how long your Brave New World lasts.

That is how Totalism differs from other forms of atheism. It’s the most extreme form, unlimited by conscience or tangible results.

4 thoughts on “Closing Thoughts On Totalism”