Building on my last post, an understanding of Totalism’s methods leads to a capability for opposing Totalism. The central element to arguing against a Totalist is that they respect power instead of truth. The Christian is easily frustrated when he points out that the prophets of socialism are rank hypocrites. In our worldview, this should be a killshot: the truth is not in them. But the Totalist is reassured: he got away with it.

The example of the moment is Anthony Fauci claiming masks don’t work against COVID, then claiming masks are critical against COVID, then saying on the record that he lied to us about wearing masks because he didn’t want the disposable people hogging the essential workers’ equipment. Lies and insolence! But instead of torches and pitchforks, he’s Man Of the Year in USA. Deservedly so, from the Totalist point of view, because he lied to people in broad daylight and was celebrated for it.

This is the trap you must avoid when engaging a Totalist. You’ll talk truth and he’ll talk “whatever will win this argument” until the two of you are speaking past each other to fantasy targets inside your head. This is even what Totalists do on a good day. They aren’t protecting their own position; they’re protecting the Narrative software uploaded into their brain like a meme virus.

And that gives us our openings.

Nothing emboldens the Totalist as much as seeing other people practicing Totalism. Nothing upsets them as much as watching other people ignore the prophets while going about their daily lives. This is, in fact, why it’s called Totalism in the first place: Totalists are driven to force their personal behavior upon the entire world as a way to validate their trust in the Prophets’ power.

(I use the term “prophet” to describe the creators and distributors of the Narrative because it doesn’t have leaders in the strictest sense. It’s the same as we Christians regarding our church leaders as intermediaries on Christ’s behalf.)

This leads to the first and most simple way to counter the Narrative: VIOLATE IT. With a smile. Always with a smile, because if they see you being miserable in your efforts to disobey then they can still feel smug. But if you go maskless and act like it’s no big deal, it can cause actual pain to a Totalist because you’re getting away with it. And that just ain’t supposed to happen in Whoville.

1. Have fun violating the Narrative

Mystical manipulation is much harder to weaponize against. It’s the motivation for True Believers to join Totalism in the first place. Lacking a real God to serve, they accept human institutions to fill that void and then defend them as jealously as I would defend Christ: wholeheartedly unless somebody can prove to me that he isn’t really God Almighty, because my motivation for following Christ is that He’s the true God.

The counter to Mystical Manipulation is Christianity. There’s no point in substituting one atheistic religion, one particular Narrative, for another one.

I’ve seen the idea suggested in dissident forums, that we should adopt the enemy’s tactics of ruthless applications of power together with whatever lies are needed to get away with it. This won’t work because while power is the core of Totalism, its appeal is wielding total control over the believer. They want oblivion, the manipulation of their lives. Methinks it is the female submissive instinct misplaced.

Binary thinking is simultaneously the hardest and easiest issue. I still get sucked into mansplaining by it, although I’ve gotten better with my mocking “Which is it?” comments during my fisks, in which I present two blatantly contradictory possibilities. Others do this with good results, also: 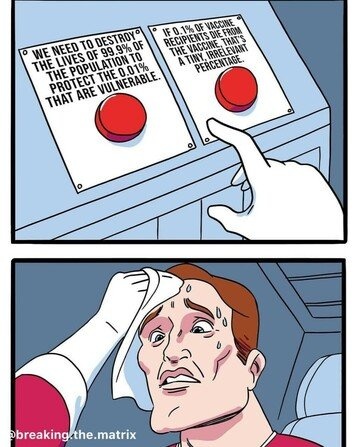 For verbal engagements, recognize that binary thinking is a trap. The Totalist wants to shunt you into one of two prepared positions. The solution is simply to not participate with that and make your point directly.

As was his wont, [Sherlock Holmes] answered my thoughts rather than my words. -Watson

3. Don’t play into binary thinking except to mock.

The next step is an easy one. The Totalist hates innocence because innocence allows dissent, which in turn threatens the Narrative that he seeks to protect. Stand your ground here. Maintain your innocence when you are innocent. Never apologize. Never give a false confession. Your mere existence as an innocent man is a victory. The Totalist might still manage to destroy you but the damage to the Narrative will be done regardless.

This is a reason why martyrdom spreads Christianity. A martyr is an innocent man who has passed outside the Totalist’s power forever, without even the ‘crime’ of escape.

I’ve had no success countering the Totalist faith in institutions. It’s one of the reasons I’ve been slow to write this. The Covidian invokes National Public Radio and World Health Organization with all the ceremony of a Catholic praying the rosary. “This is CNN… this is CNN…”

All I can say is that proving WHO Director-General Tedros is a mass murderer does nothing to shake the Totalist’s faith in Tedros as a trusted voice on healthy living. This is consistent with the Totalist caring mainly that his deities are powerful instead of honest. Perhaps next time, I’ll argue that Tedros is China’s weak little bitch.

Anybody who opposes Totalism will inevitably end up as a Designated Enemy of the Narrative. This is not about being an enemy, mind you, but being an official target to be destroyed by any means necessary.

The proper response is to stay the course. Remember that what the Totalist values most is power. The ability to endure, or ideally to act like you don’t even notice the braying mobs, is the greatest show of being correct that you can make. You would not be a Designated Enemy if you did not have some form of power over the Narrative. Find out what it is and yank it like a loose slot machine’s handle.

In Donald Trump’s case, I believe the underlying motivation of Trump Derangement Syndrome was that Obama had primed the Federal government for the Red Dawn. When Trump got the Presidency over Hillary Clinton, he was handed the very cultural detonators that the Totalists had built for use against the innocent of America, at the exact moment they had intended to use them.

When the FBI, CIA etc. plotted Trump’s removal, it wasn’t because they hated him. It was because they were scared shitless that Trump would do to them what they had been planning to do to his supporters, with the tools they had designed to crush all opposition. A couple Executive Orders, maybe a false flag and Trump could have been a real-deal God-Emperor.

Imagine if during the American Civil War, President Lincoln had built a gigaton nuclear bomb, armed it and deployed it to one-shot nuke the Confederacy into eternal, shattered defeat. Then General Lee captures the convoy, brings the giga-bomb north to New York City and uses it as a coffee table while trying to negotiate a bipartisan settlement like he doesn’t even know what it is. And it’s possible he doesn’t.

No wonder Trump’s enemies kept spazzing out. But it wasn’t Trump they cared about, not really. Trump just squatted on their source of Ultimate Power for four years while resisting all efforts to give up his very nice coffee table. He should have checked for the reason they were desperate about the Presidency and their projection should have been his first clue.

To sum, formal debate is not a good way of opposing Totalism. Debate is how one goes about determining truth or at least, reaching consensus. The Totalist engages in debate only to prove to himself that the prophets are powerful and will protect him from an unpleasant reality. No argument you make will be as effective as ending the engagement with you being 1. disobedient, 2. confident and 3. happy.

The Covidian does not care if face masks actually work. He doesn’t care if lockdowns have consequences worse than any plague could ever have been. He cares only that God is dead and he found a strong replacement in Bill Gates who promised to micromanage his life down to his DNA. It is not a mindset easily available to the healthy man.

1. Have fun violating the Narrative

3. Don’t play into binary thinking except to mock.

3 thoughts on “Debating Against Totalism”