Considering how many attacks John MacArthur’s Grace Community Church has weathered in combating government tyranny, I’m rather surprised that only now is the devil resorting to his favorite tactic: the anonymous accusation.

John MacArthur’s Grace Community Church (GCC), which has defied county orders banning indoor worship, appears to be having an outbreak of COVID-19 among its leadership and members.

He PUBLICLY defied county orders, please. Johnnie has a record of NOT doing secret-squirrel.

But a GCC leader who wanted to remain anonymous for fear of losing his job says staff and members are being pressured not to report new COVID cases to the health department for fear of being shut down.

Stop the presses! “In a breathtaking new report by a professional investigative journalist, an anonymous source claims that Mister Famous is not following the rules.”

Under a county health order, places of worship must report to public health when at least three coronavirus cases are identified among church staff or congregation within a span of 14 days.

The Los Angeles County Department of Public Health told The Roys Report, “No additional outbreaks have been reported by Grace Community Church” since an outbreak at the church in October. (That outbreak was investigated and closed in November after no further cases were found among employees for 14 days.)

The previous outbreak was reported as required by law? And just a month prior? This investigative reporter needs to do more than claim that somebody got sick. What might be MacArthur’s motive in keeping quiet the second time but not the first time?

But the GCC leader, whose identity I’ve confirmed, said he knows of staff at GCC who recently contracted COVID, as well as two GCC members who are professors at The Master’s University where MacArthur is chancellor emeritus. He added that multiple members of the Filipino ministry have tested positive for COVID, including a leader of the Filipino ministry, who’s been hospitalized.

GCC is not just a megachurch. It has an affiliated seminary and also a couple subsidiary church organizations. With that many people spread across different management organizations and even cultures, a conspiracy of omerta is very unlikely.

Please consider an end-of-the-year gift so The Roys Report can hire another reporter and expand its coverage. Click to donate now!

We’ll discuss Roys in a minute but mid-article shilling like this is typical of left-wing news sources.

The leader said he and his wife also have COVID and he is very sick. Several times during our interview, he had to stop because of coughing fits and to catch his breath.

He’s dying of COVID yet afraid of losing his job by blowing a whistle that would make him a Hero Of the Soviet Union.

Similarly, a blogger on Medium who goes by the pen name, “Modern Day Zorro,” posted last night that seven staff and elders who attended a Christmas party at GCC have COVID and are exhibiting symptoms. Zorro said that at the party, “lunch was served and maskless elderly and Elders sat should to shoulder, hugged and shook hands.”

Yes. They’ve been publicly hugging and mask-free since July. I was even there. Methinks this is an effort to find a “not a First Amendment-protected act of worship” casus belli.

I asked the GCC leader about Zorro’s account and he confirmed that GCC had a Christmas party on December 8. But he added: “John (MacArthur) will NEVER admit that number. I have no doubt that it is true, but any church leader who publicly affirms that will be looking for a new job!”

One post stated that “a lot” of members of GCC’s Filipino Outreach Ministry “have been testing CoVid+.” The post added that one of those sickened is a leader of the Filipino Outreach, who’s been hospitalized.

The post said two other members of the Filipino ministry have pneumonia and one of them has been admitted to the hospital, as well.

Fine, go after the Filipinos. I assure you as a guy who attended MacArthur’s main service when he reopened, the main church is a very cracker sandwich. It would have been their decision to not social distance, not Johnnie’s.

There’s some screenshots and more discussion at the link but this is enough to show what a hatchet job it is against GCC. Despite consisting exclusively of anonymous informants, this report was deemed important enough to at least merit coverage on Christian Post. 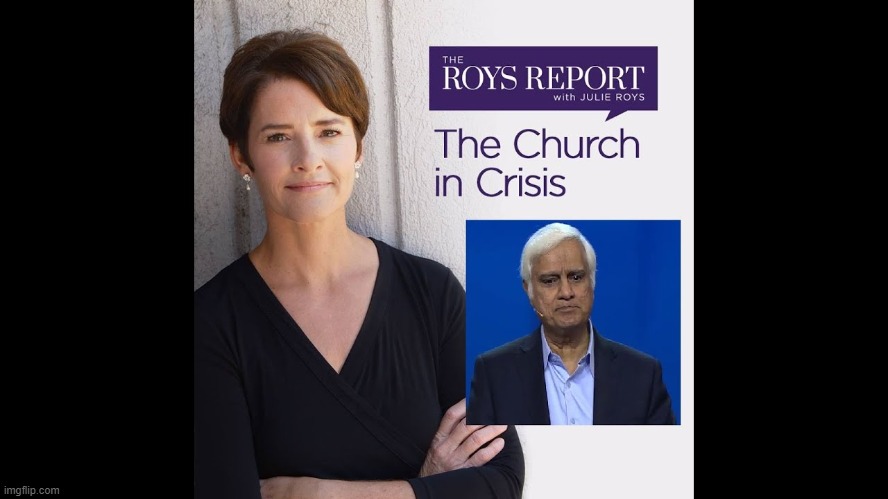 Oh my Dog, it’s Karen! Inset picture is Ravi Zacharias. Let’s discuss him in the context of this fearless reporter. From Wikipedia,

In 2017, Christianity Today reported accusations that Zacharias had exaggerated his academic credentials; for instance that he had referred to himself in multiple articles and videos with the title “Doctor” or “Dr.”, despite lacking a PhD qualification. In response, Zacharias said he had been “conferred ten honorary doctorates” and said further that “in Ravi’s homeland of India … honorific titles are customary and are used frequently out of respect for elders, including by the RZIM India team when addressing Ravi.”

A bit sketchy but okay.

In response, Zacharias filed a RICO lawsuit against Thompson accusing the couple of trying to extort money from Zacharias. The case was settled in November 2017 with a non-disclosure agreement.

Four months after Zacharias’s death in May of 2020, three women who worked at two day spas he co-owned in Atlanta came forward alleging that Zacharias had sexually harassed multiple massage therapists over the course of a period of about five years.

Ravi punked Lori Anne so badly that the rest of the MeToo-ers waited until he died to try the ghetto lottery against his estate instead of the man himself. Rest in peaceful victory, Ravi!

But what does that story have to do with Roys?

In a three-part installment last week from The Roys Report, the website of independent investigative journalist Julie Roys, new testimonies and emails were released suggesting an alternative version of events than those that were represented nearly three years ago when allegations emerged that Zacharias had been involved in an illicit online sexual relationship with a Canadian woman. Around this same time, the famed apologist’s academic credentials and resume were also scrutinized amid questions he had inflated and misrepresented them.

‘Three-part installment’ being why I’m using this article as a summary.

Zacharias, who died in May after a battle with cancer, said in a Christianity Today article published in December 2017 that the woman had sent him unwanted, racy photos of herself and that it was part of a plot to extract millions of dollars from him and his ministry. …

Christian counselors Jerry and Denise Basel, who helped Thompson in October 2016, spoke to Roys about the emails exchanged between Zacharias and Lori Anne. They believe the online communication reveals an abusive power dynamic given the 30-year age difference between the two and that it was tantamount to grooming.

“In many ways, she was kind of like a child in regard to him because of his age,” Jerry Basel told The Roys Report in part 1 of her series, which was published on Sept. 14.

Bullshit. Thompson was old enough to be married. She was not a child.

According to letters that Lori Anne wrote and sent to third parties before the NDA, Zacharias was the one who suggested that the couple keep in touch with him though the apologist has said that Lori Anne made the suggestion. They began emailing each other and while Brad did not follow through, Lori Anne and Zacharias continued to communicate online. She shared details about her past, including stories about abuse by her father, and grew to trust the apologist as a fatherly figure.

She sent the documents to third parties then signed an NDA to not release the documents? We don’t need to read more… but then we’d miss the show…

Their communication turned sexual in 2016 after Zacharias professed his love to her, Lori Anne wrote.

It wasn’t until her sister, Tamara Batiste, and later her counselors called the relationship “grooming” that Lori Anne said she realized he engaged in “predatory” behavior.

Grooming for what, a homosexual tryst? That is what sexual grooming is.

The Roys Report also obtained documents, invoices of gifts from Zacharias to Thompson, and phone records appearing to show their conversations, all of which substantiated Lori Anne’s version of events. Roys obtained these from her sister, who had received them before the Thompsons signed the nondisclosure agreement that forbade them from speaking publicly.

Julie Roys received and publicized information that was intended to be banned under an NDA. She was a participant in circumventing that document:

Lori Anne has maintained that they signed the NDA under great duress and there is nothing she and her husband have that they do not wish to be disclosed. On May 21, she released a video two days after Zacharias died, asking Zacharias’ family to release her from the NDA.

And so on. Roys has made a reputation attacking big-name Christians with varying levels of success and credibility since denouncing questionable behaviors of the Moody Bible Institute while hosting their radio show. Well, I suppose I do that also… but I also go after the small names when they come up, and when a big (or small) name does right by God then I’m happy to give him the credit he’s due. (Like John MacArthur.) Thus, this comment from Roys is informative:

“I never thought I’d see the day when leading evangelicals would publicly espouse that character doesn’t matter — and that promoting sexual assault is simply ‘bad boy talk.’…I honestly don’t know what makes me more sick. Listening to Trump brag about groping women or listening to my fellow evangelicals defend him.”

She went TDS over Trump’s “grab ’em by the pussy” comment. That’s not what healthy women do. A high-testosterone, college-educated female journalist who made a name for herself by attacking male bigwigs… you don’t suppose she’s compensating for some Alpha ghosts? 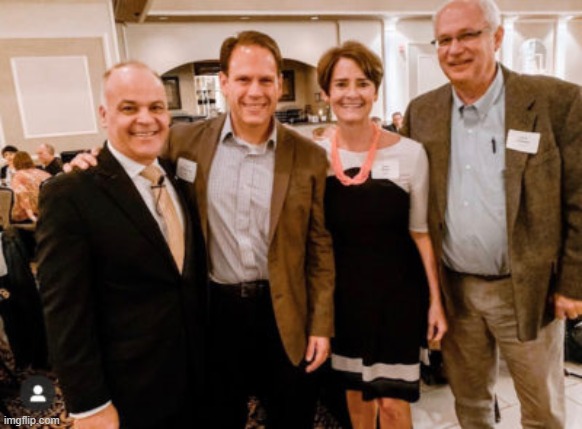 To conclude, the Biblical standard for going after a church leader is “two or three witnesses” not “two or three anonymous sources”. It’s unethical for both Christians and journalists to accuse the likes of John MacArthur on such a flimsy basis of evidence.