What do you do when social media suddenly cares about the tender feelings of simps, incels and virgins? You follow the money!

Twitch will no longer allow streamers and commenters to go around calling one another “simps.” The term — a recent favorite in the Twitch community that nominally refers to men who seem desperate for a woman’s attention — will be banned when used as an insult under Twitch’s upcoming revamp of its harassment policy. “Incel” and “virgin” will be banned as insults, too, Twitch COO Sara Clemens said during a live-streamed town hall this afternoon.

The new policy, first spotted by esports consultant Rod Breslau, will go into effect on January 22nd. It also includes stricter rules around sexual harassment and seems to give Twitch more leeway to ban streamers and commenters who make offensive comments.

“Simp” is being banned under a portion of the revamped policy that prohibits derogatory statements about another person’s perceived sexual preferences. “And that does include negatively targeting another person with sexually focused terms,” Clemens said. Twitch is also “proactively denying” emotes that include all three of these terms as well. 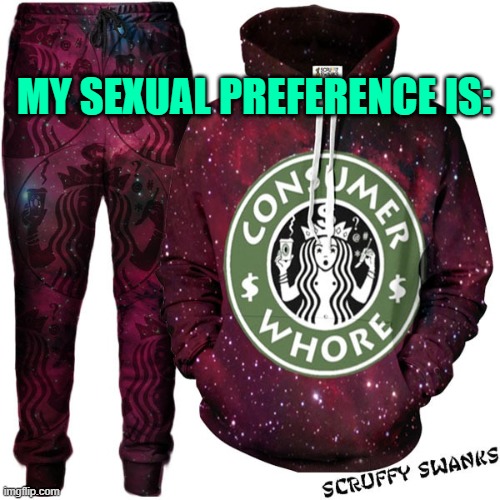 Twitch is banning the harassment of its customers’ money-donors.

The words “simp,” “incel,” and “virgin” will not be banned in all situations. Twitch will only take action when they’re used for harassment — but, typically, that’s how these terms come up on Twitch.

In related news, gambling casinos have banned the words “compulsive” and “problem” when those terms are used for harassment of its patrons.

“We will take action against the use of terms like ‘simp,’ ‘incel’ or ‘virgin’ specifically when they are being used to negatively refer to another person’s sexual practices. Using these terms on their own wouldn’t lead to an enforcement but we would take action if they were used repeatedly in a harassing manner,” a Twitch spokesperson told The Verge.

Let’s go to that report of rampant sex harassment on Twitch!

I didn’t know sexual assault could happen via fiber optic. Ohh, right, ‘assault’ is the perception of a violent crime. Vote me for Sheriff and I promise a “no blood, no arrest” standard for misdemeanor violence. All y’all can solve your social problems old-school while my deputies watch to keep the fight clean.

I can’t promise no deputy uploads to YouTube, however, so don’t be TOO witty.

When streamer Samantha Wong told Twitch that she had been sexually harassed by another person connected to the Twitch community, the report went all the way to the top. A Twitch VP who has since left the company…

…Justin Wong, says he escalated her allegations to Twitch’s CEO, the head of Twitch HR, and a VP who managed Twitch’s relationship with the accused person. “All assured me it would be handled,” he wrote on Twitter.

But a year later, the accused person was still being featured by Twitch. According to Samantha Wong, who streams under the name Sampai, the person she’d reported for harassment was not only still allowed to attend Twitch events, but he was even given the opportunity to appear on segments on Twitch’s official channel. “You, as a company, minimized and dismissed my sexual harassment,” she wrote on Twitter. 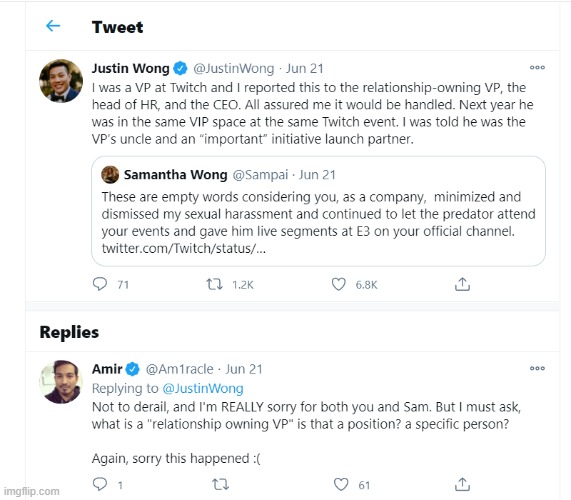 Poor Justin. Sammy accused the uncle of the VP that he reported to. Somebody’s head had to roll and it couldn’t be Twitch VP’s Uncle Rainmaker, now could it be? No, Justin must have “handled the situation inappropriately”.

[Sammy] Wong is one of dozens of people who have come forward with stories of harassment, abuse, and assault in the gaming industry over the past few days. The stories span the industry, but one group is heavily represented: Twitch streamers. These streamers, mostly women, say others in the Twitch streaming community, mostly men, engage in abusive behavior. A Medium post cataloging the recent accounts lists more than 60 people accused of misconduct, in many cases with accusations from multiple people.

But not all cases? He said/she said and guess who is being believed.

Their accounts have led to a growing demand for Twitch to do a better job moderating, protecting, and setting the tone for its community. The company has said it will investigate and potentially punish the accused users, and as of Wednesday night, it had begun issuing permanent bans. But streamers are doubtful that Twitch is ready to take them seriously.

Somebody send nudes to her idol and got snubbed. No man publicly solicits underage sex favors in Current Year except senior government officials.

Others didn’t happen on Twitch directly but involve people in its community. Several people said they met an abuser through Twitch or that misconduct occurred at a Twitch event or an afterparty at a Twitch convention.

“I didn’t do anything on Twitch to get banned. My accuser went online and saw that I had an account with them, and that was enough.”

Many of the accused are also verified Twitch Partners. Streamers who are successful enough on their own and put in enough hours streaming on Twitch become eligible for Partner status, which grants a number of perks, from a purple checkmark showing a streamer is verified to promotional opportunities at events like TwitchCon. Twitch says that it manually reviews applications, and not every applicant is approved, even if a user meets all the criteria that determine eligibility.

That checkmark of approval is a particular source of frustration among streamers criticizing Twitch’s inaction. They say the company is giving these men a powerful position from which they can prey on fans or other streamers and that Twitch is failing to ban verified streamers despite credible reports of harassment or assault.

A status symbol is a source of the frustration over sexual assaults?

Many of the accused are also verified Twitch Partners. Streamers who are successful enough on their own and put in enough hours streaming on Twitch become eligible for Partner status, which grants a number of perks, from a purple checkmark showing a streamer is verified to promotional opportunities at events like TwitchCon. Twitch says that it manually reviews applications, and not every applicant is approved, even if a user meets all the criteria that determine eligibility.

That checkmark of approval is a particular source of frustration among streamers criticizing Twitch’s inaction. They say the company is giving these men a powerful position from which they can prey on fans or other streamers and that Twitch is failing to ban verified streamers despite credible reports of harassment or assault.

Classic weaponized hypergamy. Women move in, start competing for the sexiest of men and destroy everything when they inevitably get passed up.

Other disturbing accounts involve predatory behavior from adult streamers toward children, in some cases using Twitch’s own platform tools.

Only in some cases?

Twitch allows viewers to sign up for an account once they’re 13 years old, and the company’s Whisper feature allows users to privately message each other across the site. That makes it possible for adults to send messages to children privately — and some of the accusations stem from this mix.

Ci Richardson, who started using Twitch when they were 14, wrote that an adult streamer used the feature to send them sexual messages when they were 15. “How are you gonna protect all of those teenagers?” Richardson told The Verge. Twitch isn’t the only platform with this problem — in fact, no platform has done a good job of protecting underage users, Richardson said. They said they’ve heard from “a lot” of people who were underage when they were contacted by adults.

How is any social media site supposed to prevent this sort of problem? Should no conversations be allowed without a paid minder online? No upload accepted until scrutinized by an SJW? No livestreaming at all? I like those ideas but only because I want Big Tech to die.

For Twitch, moderation can, at times, be tricky. When incidents occur on Twitch’s platform, there’s a degree to which Twitch is already too late: videos and chats all go up live, which means there’s no reviewing footage for harm before it’s online. And like other online platforms, incidents involving Twitch users don’t always occur directly on-platform and in public view, requiring the company to take allegations seriously, develop policies around handling them, and devote resources to responding to them. The result could mean banning a popular, moneymaking partner in response.

On social media, the female demand for safety competes with the female demand for attention. The solution is unequal enforcement of totalitarian laws. To requote the original article: Using these terms [simp, virgin, incel] on their own wouldn’t lead to an enforcement but we would take action if they were used repeatedly in a harassing manner,” a Twitch spokesperson told The Verge.

Whether it’s okay to call someone a virgin depends on whether she takes it as a compliment or he’s shamed into not giving her more money. Thus, whether you’re innocent or guilty depends on whether the judge thinks you’re hawt or will pay to see her bewbs. Alpha Fux and Beta Bux are both fine but God help you if you’re patriarchal.