The Woke have never forgotten nor forgiven the defeat of Gamergate. Now they’re gearing up for yet another effort at entryism… and being incompetent at video games themselves, are hiring ringers and mercenaries to serve as their e-team footsoldiers.

I’ll set the context with this EA/ADL team-up.

The games industry is being pushed by Germany and Electronic Arts in a direction that, if successful, would mean the mass de-platforming of right-wingers and free speech in gaming. The Anti-Defamation League and the big names in Silicon Valley have already signed on to similar projects in the US. All of which, if successful, will mean the inevitable control of gaining by the woke.

Remember the boldfaced for later reference.

This is no surprise to anybody familiar with Electronic Arts. They were gutting acquisitions into skin suits before it was the socially just thing to do. I remember playing Bioshock for the first time when it became available on Good Old Games and uninstalling it because it celebrated Original Sin, that’s how long the rot has been in their corporate woodwork.

It starts with Germany. Martin Lorber, Electronic Arts Public Relations Director for German-speaking countries, announced in April a dual project between itself, the German government, and two new organizations: Good Gaming – Well Played Democracy and Keinen Pixel den Faschisten (No Pixels for Fascists). Their stated goal is to make sure gamers do not become radicalized into neo-Nazis.

“We must have total control of society with endless pogroms against dissidents in order to ensure that nobody behaves like a Nazi!” Even the smallest bit of digging reveals that this project is, in truth, nothing more than yet another attempt to force the games industry and social media platforms to bow down before social justice.

The two organizations joining this collaboration contain some of the most radical activists for social justice inside Germany. The organization behind Good Gaming are the Amadeu Antonio Foundation, a left-wing activist group headed by former frequent Stasi informant Anette Kahane. Kahane’s foundation got in trouble last year when a brochure sent to German schools suggested you could recognize a girl’s family as far-right if a girl wears dresses and does chores. 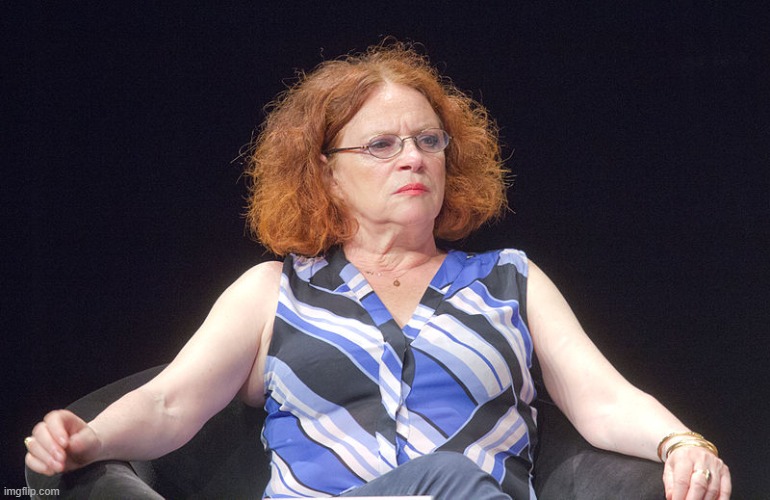 No Pixels co-founders are Pascal Wagner, a left-wing German journalist, and Aurelia Brandenberg, a lefty historian/blogger. Their organization harbors a deep hatred for gamers and is a proponent of the games’ right-wing radicalization myth.

According to Brandenburg, gamers are actively anti-diversity and right-wing. They are full of “toxic nerd masculinity in their treehouse” as they actively fight to make sure nobody except cis white males can play video games.

Anybody can play video games, of course, but if cis white men are gonna code them then their games should have cis white male protagonists. Don’t like us liking ourselves? Then learn to code!

Man, they don’t even leave us alone in our treehouses.

So anyway, the Usual Suspects are partnering up for an international, full-court press to exterminate cis white men from the computer game industry. Let’s get to the main attraction.

HOW 100 THIEVES BECAME THE SUPREME OF E-SPORTS

During a recent online merchandise drop, gaming fans eagerly refreshed a page waiting for access to a small range of limited edition sweatshirts, T-shirts, and hoodies. The prices were high, but the apparel didn’t last long: more than $500,000 worth of gear sold out in just five minutes. It’s the kind of thing that calls to mind established streetwear brands like Supreme. But in this case, the clothing was branded with a very different logo: 100 Thieves, one of the hottest names in competitive gaming.

E-sports is a burgeoning business, but it’s also an uncertain one. While it’s been around for decades and spawned ambitious projects like the global Overwatch League, it’s still largely unclear whether competitive gaming is, or ever will be, as big as many have predicted. Amid this constantly shifting climate, several e-sports organizations are attempting to hedge their bets by depending less on only winning tournaments. 100 Thieves is among the most successful to date.

Overwatch League is sponsored by Blizzard Entertainment and is an organized tournament for Blizzard’s FPS Overwatch. It’s a common arrangement for game companies to sponsor tournament of this sort, often with considerable swag and prize money.

The company was founded in 2017 by Matt “Nadeshot” Haag who started his career as a teenage Call of Duty star before eventually retiring and becoming a YouTube celebrity. With 100 Thieves, he’s attempting to bring the worlds of e-sports, YouTube, and streaming together, while adding in a successful apparel business to create a uniquely modern entertainment company.

The apparel side-business is NOT a common arrangement for game companies. Somebody is trying to apply the NFL/MLB/NBA template to e-sports. That might be difficult when most e-athletes don’t exactly have impressive bodies.

[100 Thieves president and COO John Robinson] previously worked at major game publishers EA and Nexon and also ran his own mobile game studio for a time.

He worked at EA? He’s either an embittered refugee or a soulless corporate drone. 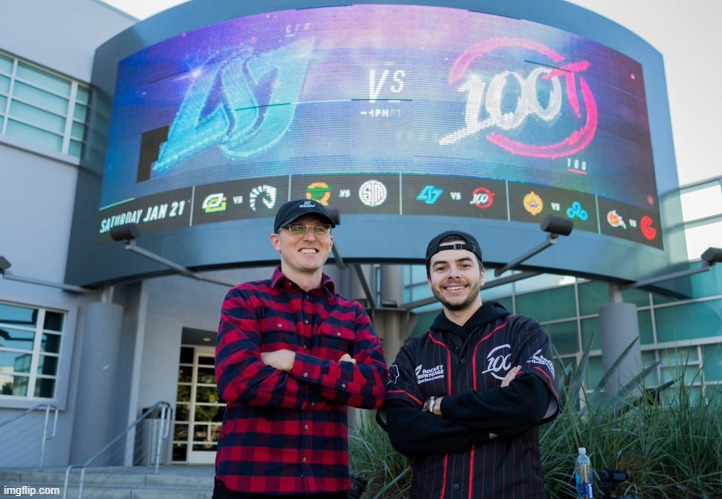 Robinson on the left.

He says that this multiprong approach to building 100 Thieves is what attracted him to the company in the first place. “Everyone else was trying to apply the Utah Jazz business model to e-sports,” Robinson explains. “‘Oh, we’re going to be a professional sports team, and we’re going to sign a lot of players, and hopefully, if we win, we’ll get some sponsorships.’ And Matt was like, ‘No, we’re going to reinvent this thing. We’re going to build a huge fan base on top of not just winning, but also people coming to our content and social channels.’ It seemed like such an obvious answer, but Matt had the credibility to actually pull it off.”

Robinson’s method of buying established successes then using them to promote Management’s social agendas is exactly the Electronics Arts corporate strategy of vulture capitalism. Soulless corporate drone he is, then.

The company made its first splash in late 2017. It was one of 10 teams to join the newly franchised League of Legends Championship Series where it sat alongside entrenched e-sports organizations like Cloud9 and Team Liquid and others backed by NBA squads like the Houston Rockets and Golden State Warriors. Since then, it has continued to expand into other games — including titles like Fortnite and Call of Duty — while also structuring its business around those three core pillars of competitive gaming, content, and apparel.

The ambitions at 100 Thieves weren’t necessarily apparent from the beginning. When the company entered League of Legends, it seemed mostly in-line with other e-sports organizations, albeit with slightly better jerseys. 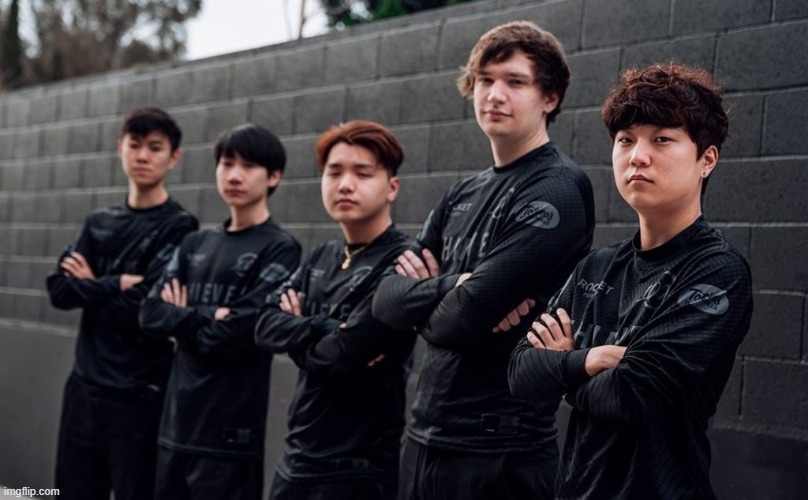 If you say so.

The same was true of its video content; it was tense, documentary-style filmmaking but nothing that felt especially new. “At first, it was just getting up to the baseline of the best teams in e-sports, and they’re really making high-quality narrative content,” says Dahl. “From there, and what we really started to think about after those first couple of months, was what type of content does the gaming audience care about, and how e-sports-focused do we need to be?”

Uh-oh. In Current Year, we all know where THAT line of thinking is going to lead. Notice the entryism in that they first, literally, gained entry to the e-sports world and then began discussing what their customers REALLY wanted.

Since 100 Thieves started with a big personality in Haag, Dahl says it only made sense to continue to expand in that direction. “If personality-driven content is king, how do we build a cast of characters or a universe around Nadeshot? We have our Howard Stern or our Tony Stark or our Bill Simmons, and I want to fill in other characters,” he explains. Think of it like the MCU, but for streamers.

Given that early success, Barber was brought on board to solidify the apparel business, though he says his role encompasses much more than just designing clothes. “I’m overseeing the entire 100 Thieves brand,” he says. “That can mean many different things. But basically, the way we walk, the way we talk, the way we appear visually.” Barber previously worked at streetwear brand Reigning Champ where he helped design apparel, managed the company’s brand, and oversaw a number of retail locations. His goal is to turn the 100 Thieves apparel phenomenon into something both bigger and more sustainable.

Outside of apparel, the main revenue-driver for 100 Thieves is sponsorships. Brands are everywhere. There’s the Rocket Mortgage Team House that’s home to the League of Legends team, and team jerseys that are covered in corporate logos from Cash App and Red Bull. Watch a 100 Thieves podcast, and you’ll see carefully placed cans of Red Bull, while a tour of the Fortnite team house might include a freezer full of Totino’s pizza rolls.

Drew Houston, co-founder Dropbox and member of Facebook Board of Directors

Big Tech everywhere. I guess we know how 100 Thieves got its name.

And Globocorp didn’t fund them to play games.

100 Thieves planned on organizing a $100,000 Gamers for Equality tournament. Things got shot down when Activision denied their request to use Call of Duty: Warzone for their tournament.

The tournament was originally set to take place from June 18, 2020, and was planned for a four-week run. CashApp and JBL were also announced as sponsors of the tournament. 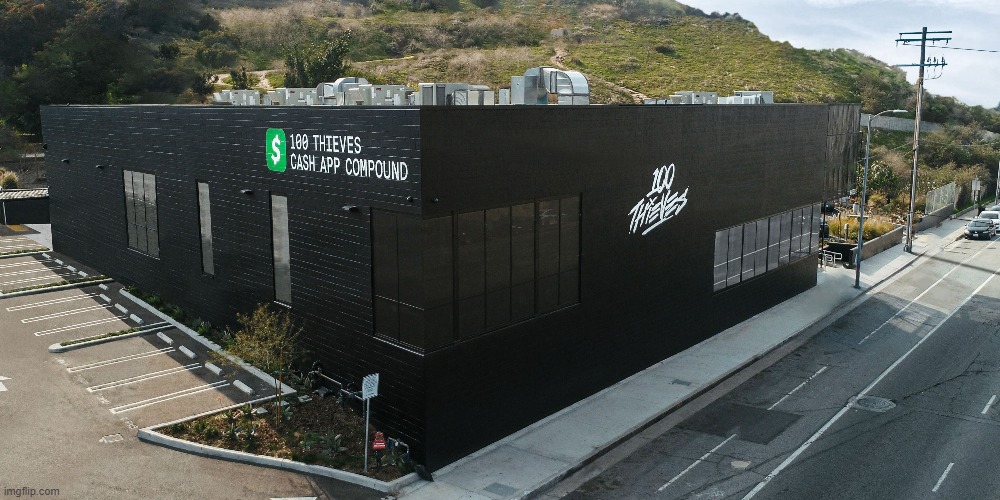 Nadeshot, who is fond of Call of Duty and its tournaments, wanted to organize one of their own. They approached their partnership team to arrange funds for the prize money. They found CashApp who proposed another idea. CashApp was willing to fund the money but they wanted to do it for charity and social justice, mainly for the BLM movement.

They tried to converge Activision’s tournament for their own purposes are were kicked out for breaking the rules.

100 Thieves is turning its LA headquarters into a voting center

100 Thieves is following in the footsteps of the NBA and turning its home base into a voting center. The gaming and lifestyle company announced today that the 100 Thieves Cash App Compound — a 15,000-square-foot building that officially opened earlier this year — will serve as an official LA County Voting Center, which will be open for early voters from October 30th to November 2nd, as well as on Election Day on November 3rd. Nadeshot has promised the fans that they would be finding another game and another publisher that would allow them to run the tournament. He also assures that the funding will reach the hands of people they were meant for.

There is no clue on which game the organization might host the tournament. Activision denying the request is a bit of a downer, but Nadeshot has mentioned how he understands the developers’ stance. They are unwilling to let others come in and host sponsored tournaments. However, given the cause, they could have been permitted.

Nadeshot and co will probably find a new alternative and inform the fans soon. The BLM movement has urged many to come forward and it’s heartwarming to see eSports organizations come in with support.

Not even e-sports is safe from heavy-handed, top-down efforts at Converging ordinary male gamers into supporting Big Fascism, excuse me, Big Tech.

Their e-team is named One Hundred Thieves? Hiding in plain sight.