I am probably the very last person that clickbaiters should try to attract. Today, I learned fifty-five synonyms for White People. Number 48 will shock you!

After 250 years, even they don’t think they belong here.

Don’t cry for me, Minneapolis!

See that white trash over there? HE has a JOB! Don’t be like that, Tyrone. “But that’s Uncle Leroy and he makes good money!”

Come on, that’s an age category!

Glad we cleared that up. Brothas be non-evangelical Christians, like Charismatics full of Holy Spirits!

Those are voters in Blue states. Leftism is why those states rusted, remember?

All our hoes be Ratchets!

They be not Ratchets! 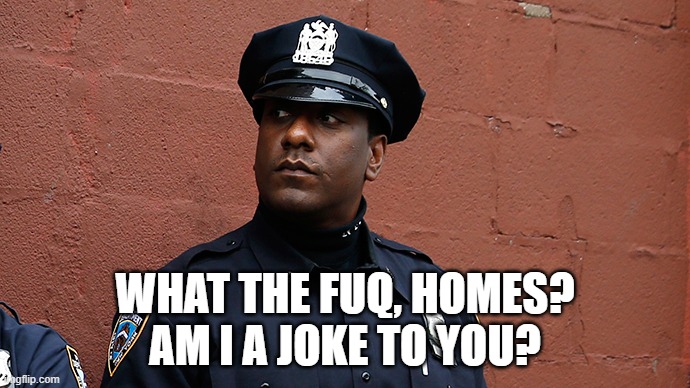 We all saw that one coming.

These three might have something to do with “Hardworking Americans”.

No, that one is wrong. White men are the oppressors! Even that homeless cracker whose wife cleaned him out over chilamony, even he doesn’t get to be a victim! Blacks are the real victims!

Also wrong. Dead people are legal voters! If my vote ever counts then a Community Organizer didn’t do his job.

I took that one personally.

You aren’t leaving a lot of room by taking those two out. Oh, right. “Hardworking Americans.”

Once again, “hardworking Americans”. You claim to be victims but all I see you doing is watching B.E.T. on satellite TV in low-income housing projects. You didn’t build that!

I’m not complaining, but what’s up with the antigun attitude? You haven’t gotten over your ancestors’ fear of thundersticks yet?

Because some white people are victims of the system, too. Especially associate college professors who can’t make tenure OR pay off their college loans! They got no choice but to hit Trump supporters in the head with bike locks. Which makes them black people because they aren’t hardworking, essential, middle-class, legal-immigrant homeowners.

What a lazy blog post this was. Let me spice it up with a case study of black people versus middle-class taxpaying sports fans. 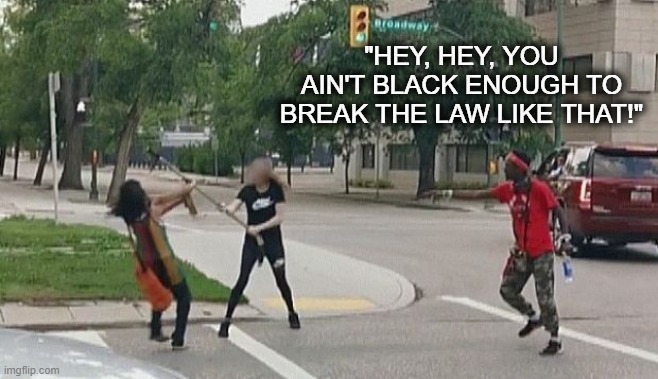 The Winnipeg Police Service is investigating after two protesters were attacked with a hockey stick following a Black and Indigenous Lives Matter rally in Winnipeg.

Video of the incident, which was reported to police just after 8 p.m. on Saturday, July 4, is circulating widely on social media.

In one video, a woman can be seen getting out of a sedan on Broadway at Hargrave Street and charging toward the pair of protesters with a hockey stick. A second video shows the hockey stick change hands with a second woman from the vehicle — before a second protester is hit in the head.

They got beaten up by women?

Theo Landry, 29, who is African-Canadian, was struck first. “I was very much scared for my life,” he said. “I’m lucky it was a hockey stick because I don’t know what they could have come out with.”

Reminds me of the old saying, “I went to the fight and a hockey game broke out.” Except no game this day.

Landry said the incident started a short time after the #AreYouListeningMB rally for Black and Indigenous Lives at the Manitoba Legislature came to an end. He said he and his friend were marching east down Broadway toward the Canadian Museum For Human Rights, where a round dance was set to take place.

The rally was over but they were still marching in traffic? That’s not what a BernieBro would do.

On the way, in what he describes as an act of peaceful protest, Landry decided to lie down on Broadway for a moment in front of cars to draw attention to the cause and rally. That’s when a woman and three other people inside the car began shouting at him, he said. “[She] started yelling slurs, racial slurs, spitting insults and saying our protests didn’t mean much,” Landry said. “She was very much offended by me stalling her time.“

Those stupid families! Moms got no respect for black people!

Landry got up off of the road and said the car moved aggressively past him, so he tossed some water from his water bottle onto the vehicle, he said.

“Black” means “not a law-abiding citizen”. Credit to Theo for not appropriating white culture by quietly suffering an insult!

After that, the vehicle stops and the video recording of the incident starts, he said. A woman can be seen getting out of the car, with a hockey stick in her hand and moving toward Landry and his friend.

Theo got beaten up by a girl! Who’s protesting NOW, baby?

“You can see in the video there’s a lot of anger driving her forward,” he said. Landry was struck twice in the arm and was not badly injured, he said. However, his friend, who tried to intervene, was eventually hit in the head, he said. A second witness video, shot from a different angle, shows the hockey stick changes hands to another woman in the group who was in the vehicle and strikes Landry’s friend, who declined to be interviewed.

Landry, who is a registered nurse, said his friend suffered a gash to the right side of her head and was bleeding. At that point, Landry said the group hopped in their vehicle and took off. The witness who captured the video recorded the suspects’ licence plate and gave it to police.

CBC News has concealed the suspects’ faces in the videos because it’s not confirmed whether they are minors and they are not currently facing criminal charges.

CBC News has reached out to three of four people believed to be involved for comment. Jylah George-Marie Shallcross, organizer of the event and founder and co-head of Are You Listening Manitoba, did not witness the incident, but called the videotaped attack heartbreaking.

“Overall, I feel horrible,” they said. “I also feel very concerned for the safety of not just my friends, but for all of the Black and Indigenous youth and the rest of the BIPOC community in Winnipeg.”

How exactly was she involved? The rally was over, remember?

Shallcross, who supports the movement to defund police, believes the kind of violence portrayed in the video is what police should be dealing with, instead of wellness checks, for example.

And by “police”, she means “all the white people who are supposed to be keeping my law-breaking foreign ass safe”.

Shallcross believes the attack was an act of racially motivated violence and said Winnipeggers need to know racism is real and rampant in the city and around the world.

Rather than a “blocking traffic”-motivated act of violence? Eh, could’ve been a coincidence.

“This is why we’re fighting. This is what we’re protesting against,” they said. “Seeing that one act, that is one of many acts that are not getting out there.”

In an email, a spokesperson for the Winnipeg Police Service said officers responded to the report of an assault involving two victims and said the investigation is ongoing. There is no word on charges.

“Members of the major crimes unit are investigating,” the statement read. “Anyone who witnessed the incident is asked to contact police.”

“Our work is very stressful. We could use another laugh as good as this one.”

Landry, who has filed a statement with police, said he’s not calling the attack an act of racism, but he is not ruling out that it may have been racially motivated.

He said he hopes there will be some kind of restorative justice for those involved. “The whole point of this is to create a world of peace and not to instigate and to create more damage,” Landry said.

3 thoughts on “How To Say “White People” In Negro-Talk”