An exceptional year deserves an exceptional submission! What’s a man to do when he’s forced to choose between telling his wife No and telling a random server girl No? It’s an inverted love triangle between the wife of his dreams and the waitress whose name he can’t remember!

AITA for telling our server she had a beautiful scalp at my wife’s birthday dinner?

This happened before the coronavirus was a thing in case you’re wondering. Obviously right now we’re staying in as much as possible and supporting local business through take out and delivery.

He’s off to a strong start by signaling irrelevant virtues!

So this was over a year ago and my wife won’t let it go. I’m looking for some external input. I took my wife to our favorite local spot for her birthday. Everything was good as usual, but we had a server neither of us had seen before with a somewhat striking appearance: she was completely bald. Normally I wouldn’t say anything about something like that because I’m afraid of being rude, but toward the end of the dinner the server made a joke about she and I having the same haircut (I’m bald).

Motivation by fear. I wouldn’t have said anything in that situation because I don’t want fugly feminists spitting in my food. Motivation by hygiene.

I said something along the lines of, “I don’t mean to be rude, but I’m curious. Are you bald by choice?” It turns out she was, which was a great relief to me since I didn’t want to pry into it if she was sick or involuntary bald for some reason.

Cuck confirmed! If she’d been “involuntarily bald” then noticing would have been an insult, but “voluntary bald” is beautiful!

She was more than happy to talk about it and told me all about how she’d always loved bald heads and wanted to try it. She said she got positive feedback and just kept her head shaved. I told her I loved that and I thought women could look very beautiful bald even though it’s not something you see often. I told her she had a great head shape for it… 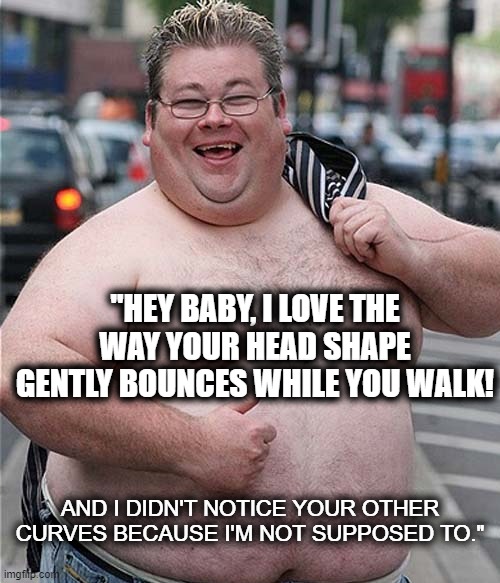 …and joked about offering razor recommendations. It was light conversation and that was the end of it.

The waitress shaved her head because she’s past the Slut Event Horizon and possibly a transsexual. She brought it up because she wanted validation that cutting her hair off had been a good idea, which it NEVER IS!! Women, DO NOT CUT YOUR HAIR! Any man who says the chemotherapy look is good for women is a lying pussy-beggar.

For the rest of the meal my wife was silent. I could tell something was wrong. When we got to the car, there was a moment of pause between us and I asked if something was wrong. She replied, “Are we going to stop at Walgreens and pick up some clippers?” I asked her what she meant and she said obviously since I was enthralled with our server’s shaved head she had to do something to win her husbands attention back. I was “blatantly” flirting with our server, apparently. It spiraled into a huge fight with my wife accusing me of wanting to experiment with an exotic-looking woman because I was tired of my boring old wife.

For once, I totally understand a woman’s side of the argument. She works on her hair, tries to be pretty, then THIS shows up… 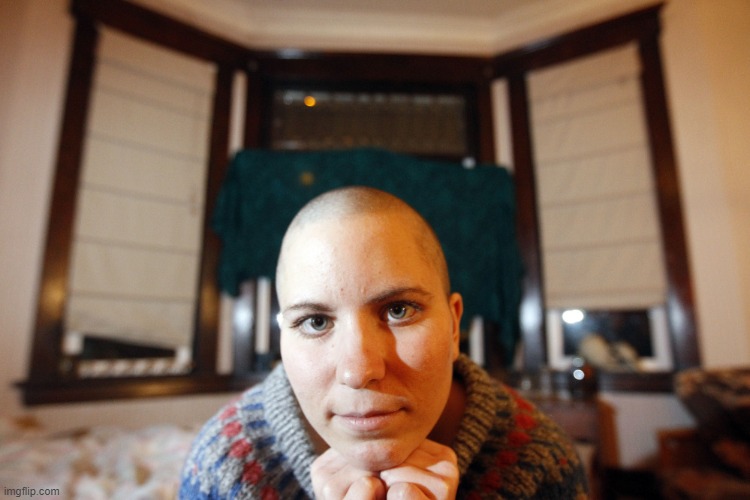 …and gets a compliment & flirting from him!

I can’t deny that in the moment, I probably looked like I was flirting with our server. It was not intentional, but I guess I realize how it could’ve seemed inappropriate at my wife’s birthday dinner. I did find her attractive…

No. NO, Bub. She was NOT attractive. She was BALD.

…but my wife will always come first. I’m attracted to her and I love her. That’s why I married her. Even now she makes little references like “I guess I’m not as interesting as a bald goddess” or “Does this look good on me or do I need to show some scalp?”

So am I the asshole for this? I just want things to be okay. I’ve tried apologizing but nothing will stop it.

That’s the problem, Bub. You wanted to be nice to everybody. When a waitress tried to fish a compliment out of you for the way she mutilated her natural beauty, you gave it while your wife glared in fully justified frustration. The proper response was, “You look ugly. Baldness is only for men. Do you even try anymore?” But that required telling a woman No, now didn’t it?

(Pro-tip, it also requires your food to be delivered first. For hygiene’s sake, y’know.)

And that’s why Bub’s marriage has been rocky for a year now. He hasn’t found a way to validate his wife caring about her appearance that doesn’t in-validate his validation of a waitress who defiantly did NOT care about her appearance. We must defend muh’Lady’s honor! but which Lady? My wife or that one waitress from last year? Don’t make me choose!

EDIT: I’m starting to see people making comments that seem to indicate it is never okay to talk about balding in public. I reject this completely. I did not bring this up out of nowhere; the topic came up when the server pointed out (in a jovial fashion) that she and I had the same haircut. It was a brief conversation with zero negative or uncomfortable vibes, and when we left I said bye to the server and she pointed at her head and gave me a little thumbs up. I get the feeling we would’ve got along well as friends. So this isn’t the issue.

“I love you AND I want to be friends with her!”

EDIT 2: Good grief you guys, let me clear something up. My wife is 25 and I am 24. The server looked older than both of us, probably early 30s.

Right on schedule for the Epiphany phase.

So anything saying in flirting with a younger woman is wrong. Also my wife suggested I don’t find her attractive anymore which is completely wrong. Why would I marry someone I didn’t think was capital H O T?? She’s plenty attractive.

Is female baldness attractive to men, yes or no? Yes: your wife shaves herself bald for you. Cue impotence in the marriage bed. No: That waitress you saw one time last year will be sad when she reaches Heaven and finds out you didn’t mean it.

I’m reading everything you’re sending and it’s split down the middle as far as I can tell. All I can tell you is please read carefully. No one was trapped in a conversation with me they didn’t want. As I said the server got my attention as we were leaving. Do you get the attention of people you’re glad are almost out the door? Also I don’t remember the conversation down to the last detail but it was maybe a minute tops. Hope this gives things a little more clarity.

EDIT 3: Lmao yall I see my post got tagged. I don’t know if that means they counted or what but I guess what I’ll do is apologize to my wife in a more formal way and see if she’ll tell me why she’s been bringing this up over and over.

Train wrecks are not salvaged with flowers.

She doesn’t even seem mad anymore really, it’s just coming up every time she talks to me it seems like. And I never addressed it but I already apologized sincerely right after this happened last year. And again numerous times. I don’t know how I can do it any better.

Also yall are ridiculous! I got two messages saying I should get divorced by her immediately and one person said it was evidence of some kind of crime and I should be in jail! Yall I can’t with that one, but thanks to everyone who gave me reasonable input. I guess when this many people see a post I’m gonna get a few unhinged people. I will make a update if I ever get to a solution if this sub is okay with that.

Can anybody propose a solution for Bub? One that won’t require him to be honest or tell a woman No?