This post took a fun detour from mourning a literary Goodwhite to warning us that “understanding black grievances” should NOT result in “I understand they’re Marxists!”

We ignore Atticus Finch at our own risk

That has been my perspective, at least. Reading modern-day books on race is fine, but one of my goals is to have a more historically-cognizant perspective on the problem of racism in the United States.

Does Cap realize, I wonder, that blacks were better behaved in the Antebellum South than today? That’s not my opinion, that’s recorded history.

As is often stated, those who fail to learn from the past are doomed to repeat it. Ignorance of past errors can easily lead to misdiagnoses of, and erroneous remedies to, current societal ills. Because of this problem, I have, over the past several months, been reading the works of abolitionists and civil rights leaders from times past — people like Frederick Douglas, Charles W. Chesnutt, Martin Luther King, Jr., and John Howard Griffin.

“I want to educate myself about the history of race relations in USA.”

In so doing, I am reminded of the advice Atticus Finch gave in Harper Lee’s novel To Kill a Mockingbird: “You never really understand a person until you consider things from his point of view…until you climb into his skin and walk around in it.” In that same spirit, John Howard Griffin writes, “Black men told me that the only way a white man could hope to understand anything about [the practice of racism against black Americans] was to wake up some morning in a black man’s skin.”

Griffin took the counsel of these black men, and of Atticus Finch, quite literally: he underwent a medical procedure to darken his pigmentation so he could pass as a black man on the streets of the segregated South. His documented experiences, published in the book Black Like Me, are both fascinating and sobering.

Griffin is a fascinating example… of goodwhite self-delusion. He started out with the assumption that the only difference between white and black is skin pigmentation and then changed his skin pigmentation in order to learn what life was like as an African. “Black people are white people who don’t sunburn!” As foolish a presumption as “Women are men who lactate!”

Griffin then went looking for trouble in the South and spoiler alert, found it. He said he didn’t  deserve to be treated the way he was by white people and I agree, because he was still a white not a black. How he reacted to the behavior of white treatment of blacks is not necessarily how a black man would have reacted.

Not to say the 21st century is identical to the late 1900s. It most certainly is not. We have made advancements and genuine progress as a nation since then. But we ignore lingering racial problems to our own detriment.

Below [is an] excerpt from the epilogue of Black Like Me, [demonstrating] how these excerpts relate to our own current cultural climate…

“People like Martin Luther King, they [white men] said, were just troublemakers and subversives. Whites told their black employees, and really believed it, that the NAACP and Martin Luther King were the black man’s greatest enemies. They were offended by any suggestion of injustice. . . . How easy it was to destroy a man’s good name and reputation by suggesting he was in some way subversive or by calling him a communist” (167, 169).

These days, if you express concern over existing racial disparities in the justice system in particular or society in general, you are likely to be accused of Marxism.

They *were* Communists. The Sixties radicals are now known to be Communists. The Commies tried to start a proletariat uprising but failed because America’s proletariats knew they had life pretty good already. So, the Commies switched tactics to race-mongering. The same old politics of envy but now based on ethnic group rather than social class.

Modern-day civil rights activists and organizations are also quickly labeled as either Marxist, or subversive to the American way of life, or the real enemies of racial peace — or all of the above.

How can you Cuckservatives be this stupid and still be able to breathe? We are IN THE MIDDLE of a Communist revolution RIGHT FRACKING NOW!!! Would you even recognize a Communist if you saw one say so? 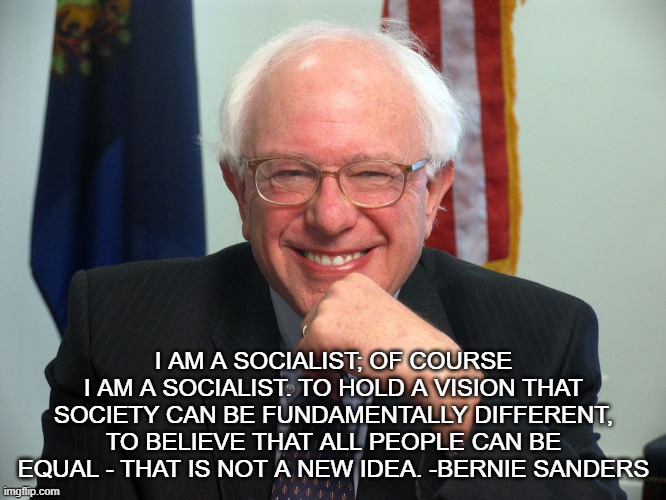 People are still astounded at how George Floyd’s death has sparked such a large public outcry against racism.

I feel a facepalm coming.

After all, the video footage of Floyd’s last moments appears to show no blatant form of racial animus. However, an analogous situation might be a simmering conflict between a husband and wife that slowly escalates with subtle verbal jabs over a period of several days, finally erupting into a shouting match when the husband makes one particularly snide comment. It isn’t just one isolated insult from the husband that causes an avalanche of emotion from the wife. Similarly, civil rights activists have pointed out that the George Floyd situation was simply the last straw in a huge pile of straws.

Thus proving that the civil rights activists lied to you, Cap. The Floyd incident, as you yourself noted, was not about race but the blacktivists staging riots claimed it was. The problem here is not a lack of “understanding” on our part, it’s police not shooting the looters dead on sight.

How did you end up this delusional about identity politics and their underlying motivations? Answer: you fantasize about being Atticus Finch in a courtroom, defending the Noble Negro farmworker/proletariat from the White/bourgeois class because they’re always innocent and pure of heart: 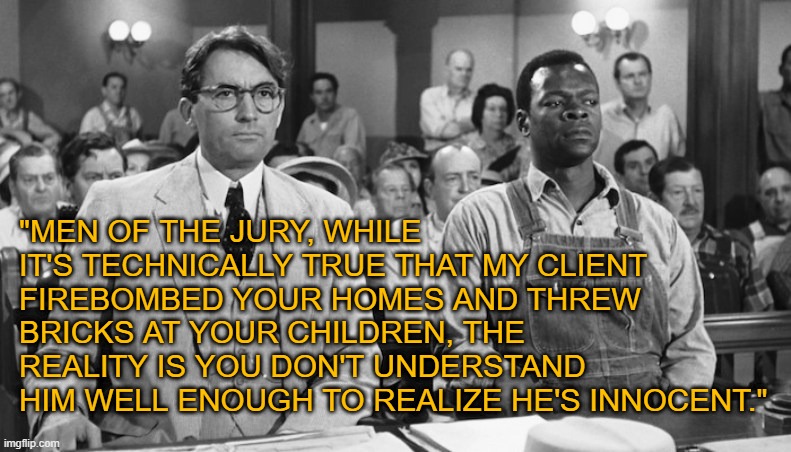 Without this understanding, many Americans have interpreted the national riots as evidence of a massive and subversive plot against our nation. And if a civil rights activist today tries to explain the catalyst of the riots (even while condemning the riots), they are told, “You’re blaming everyone for the riots except the rioters.” It’s the same back-and-forth that took place during the days of Martin Luther King and John Howard Griffin.

Cap might be the Cuckiest Cuckservative that I’ve ever seen Cuck a Cuckolding. I looked at his blog to see if he’s for real and found this:

A Public Plea to the Director of CUTIES

Ms. Doucouré:
Even though I have grave concerns over your feature-length debut, I am also troubled by the overt hatred you have received since Netflix picked up Cuties for mass distribution. The uncharitable names you’ve been given, the perverted motives imputed to you, and the death threats you have received are wholly inappropriate. They are tantamount to violence against both your humanity and the God who created you with dignity and value.

I recently discovered an interview in which you shared from your heart the catalyst for writing and directing Cuties. Several things you said resonated with me:

Right, so you made a movie sexualizing children that got lots of attention in order to demotivate girls from sexualizing themselves to get attention… to discourage them from imitating exactly what you successfully did… and us recognizing that hypocrisy “does violence against God” who made wimminz such beautiful, innocent creatures. /facepalm

Textbook feminism. Women parade their bodies on stage then vilify every man who reacts.

Based on this and other interviews, it seems your intention in producing Cuties is to critique our culture’s abundant use of sexual objectification.

It seems her intention was to normalize child sexuality with the fig leaf of “you shouldn’t be enjoying this!”

You even say as much in your interview with Indiewire, in which you address those upset with your film: “[W]e’re both on the same side of this fight against young children’s hypersexualization.”

Cap, the last man I saw this delusional about female nature was Jarrid Wilson and he killed himself when the pain of living the feminist lie became too much. He once warned Miley Twerking Cyrus about how men were only using her for her body and she should feel safe to respect herself more than that…does that sounds familiar?

Ironically enough, the reason why I have decided I cannot watch your film is the same reason why you decided to make it. Because we are, as you put it, “on the same side of this fight,” I hope you can accept the following as a form of constructive criticism.

To be clear, I will not critique your film as a whole. How could I judge the quality of a work of art I have not seen in its entirety? To do so would be dishonest and uncharitable.

With that said, the method by which a visual story is told is just as important as its message. And my concern is that your film’s central message has been hijacked by your transgressive method. 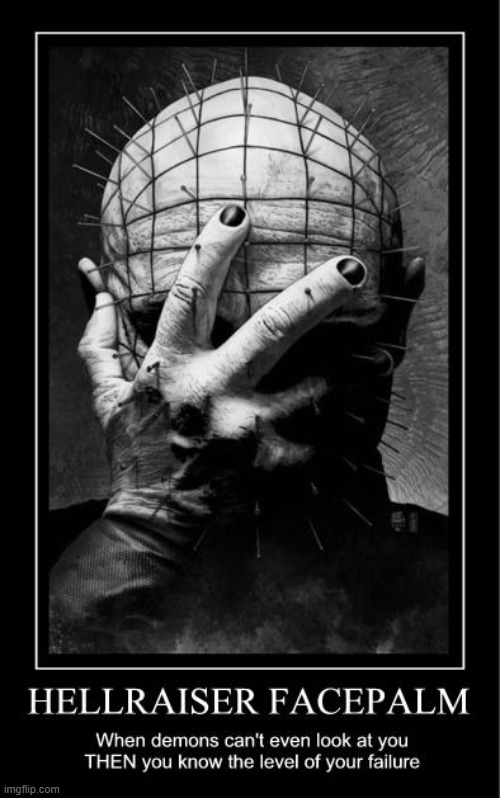 That many of your critics are mislabeling your film as blatant pornography is no excuse for you to mislabel your film as being free of pornographic content. With the visual material you’ve included in your film, your defense of it (based on intent and context) serves only as a smokescreen from legitimate and warranted scrutiny.

End segue and back to Atticus Finch!

Suffice it to say, Griffin’s experience illustrates how right Atticus Finch was: sometimes it is impossible to understand a person until you climb inside his skin and walk around in it. We may not be in a position to take Griffin’s literal approach.

That is not possible. Not even in Griffin’s extreme case. God can see the heart but we can only see the behavior. Neither should “understanding” be a one-way street. If I cannot “understand” a BLM terrorist until I’m able find a justification for his firebombings then he should cooperate when we Americans ship his violent, parasitic ass back to the Turd World. He’ll “understand” eventually, yes?

Nevertheless, we can — and should — more diligently consider things from other points of view — including those who speak to us from times, places, and experiences different from our own.

“We should always consider how our enemies’ accusations might possibly be true and never consider whether the white men of America’s history might have had valid reasons for treating the Negro like they did. And no matter what, blacktivists today are absolutely NOT Marxists! When we told you to understand them, that’s not what we meant!”