As I’d feared in a previous thread, “active shooter” training has jumped the shark into police terrorizing children so terrorists won’t have to. Bonus: the idiot gave his own statement! Texas wasn’t where I was expecting it to happen, however.

And the New Normal:

A school security test in Buna on Tuesday morning went horribly wrong. Buna Independent School District Superintendent Donny Lee said that without notifying administration or staff, School Resource Officers Mark McKinley and Mike Henderson took it upon themselves to conduct the drill, with Henderson dressed in camouflage with his face covered, running around Buna Elementary School trying to break in through doors and windows. 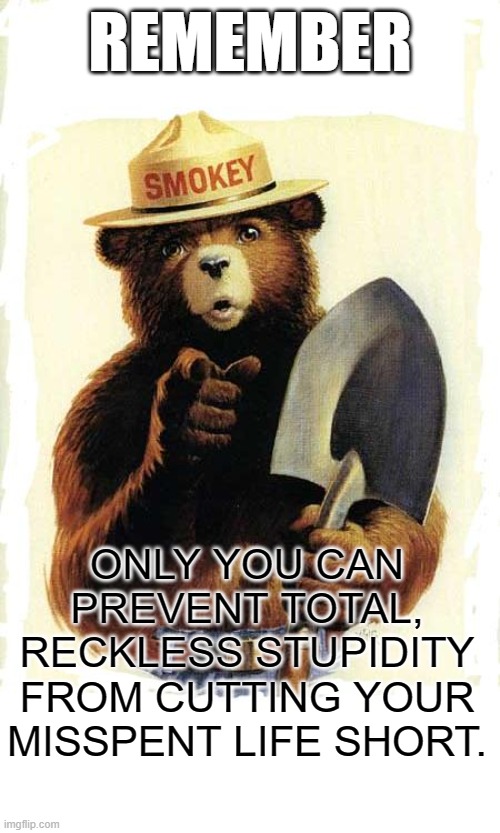 Jasper County Sheriff Mitchel Newman and Chief Deputy Scotty Duncan said that their department wasn’t notified of this happening either, so when terrified teachers began calling 911, every law enforcement officer in the county began running wide-open to Buna.

Duncan said officers arrived and with guns drawn began looking for the mock intruders on the campus, and finally learned that it was a drill when they encountered the camouflaged officers.

Henderson is lucky he wasn’t shot on sight by his peers.

Duncan said “They could have easily been shot and killed by one of our guys, and that’s after we risked our lives driving as fast as these patrol cars can go just to get there. If it’s a real situation, yeah we’ll risk killing ourselves wrapping a patrol car around a pine tree to protect a child, but doing this without notifying anyone that it was just a drill, that don’t work.”

Duncan said he had a very stern conversation with those involved.

Meanwhile, Buna ISD Superintendent Donny Lee was equally upset. Lee said “Our school resource officers decided it would be a good idea to just go ahead and do this thing LIVE where nobody knew, so that, according to their story, ‘we would get the realest reaction’ out of the deal.”

Somebody was playing a movie in his head. That’s a bad personality trait for cop work.

We asked Lee if that was a good idea, to which he responded “Well hell no it wasn’t a good idea! That was the dumbest idea I’ve ever heard! I mean, my goodness. So, yeah, there’s been some crucial conversations already had this morning. When we have to lock down our school and, you know, parents are wanting to know what’s going on, Jasper County Sheriff’s Office shows up and wastes time and resources, it scares everybody for no reason, everything fell through.”

You know what else isn’t a good idea? Talking to the media without a lawyer after pulling a stunt like that. Popcorn time!

Late Tuesday afternoon, one of the school resource officers, Michael Henderson, posted the following statement on the KJAS Facebook page:

“I’ve been called a lot of things in my life. Some bad, some good, some true, some not. I take exception to the untruths, addressing some and ignoring others. It comes with the job. When it comes to my integrity and my reputation, I draw the line there.

“Regarding the situation at Buna Elementary this morning, there are a number of outright lies being circulated. Since some who were involved won’t do the right thing, I’m more than happy to. The chips will fall where they may, but truth is truth and I while I can abide a great many things, having my reputation tarnished by those seeking to shield themselves from the fallout is something I can’t abide. Not one dang bit.

1. This was a PLANNED EVENT. I was notified by a school administrator LAST WEEK that it would be taking place some time THIS WEEK. I wasn’t aware of the date or time, only that I was asked by this administrator to “show up in plain clothes” and check the exterior doors of the Elementary and High Schools.

An unnamed administrator told him to dress like a civilian trying to break into an elementary school then gave himself a week to cover his tracks? Then didn’t tell anybody else, and Henderson didn’t think to tell anybody else either? That’s less likely than Joe Biden remembering his own birthday.

In related news stories, Superintendent Lee also refused to name the administrator who requested this drill. The lesson has not been learned, that people need to know what’s going on.

If you have an understanding of school security and basic common sense you’ll also understand that in order to test the effectiveness of any system, you need natural reactions. In other words, don’t warn people ahead of time. So, this wasn’t spontaneous.

After a county-wide demonstration of excellent trigger discipline, Henderson resorted to shooting himself in the foot. Which is it? Were staff supposed to have been informed or not? If not then what exactly went wrong with your plan that nearly got you shot on sight?

Seriously, what part of any “active shooter” drill is improved by not telling the people involved that it’s only a drill?

We did NOT “Take it upon ourselves” to conduct the drill. This was a SCHOOL SANCTIONED AND REQUIRED EVENT and I was TOLD to do it by ADMINISTRATION. I have good reason to believe that I know why these lies were told and it’s unfortunate. However, regardless of their source or intent, they are still outright LIES. Given the nature of the “exercise” and the response it could potentially generate, once at the Elementary School I removed my duty weapon and magazines and left them in my patrol car. Which, I might add, was parked prominently in the FRONT of the Elementary AND High Schools.

How is that supposed to be fair warning? “911? Help! There’s a man in a mask and camouflage trying to break into my classroom! Oh wait, I see there’s an empty police car parked across the street. We cool.”

Additionally, I waited as long as possible for as many little kids to be inside so as not to scare them from any possible response from staff.

He expected the staff to be afraid.

2. Mark McKinley did not participate, other than to monitor my actions on video. Contrary to what was reported on the apparent fake news website, KJAS, and what was also reported by a member of Jasper County Sheriff’s Department administration, there were NOT camouflaged “officers”. There was just ONE officer and that was me. I wasn’t even “camouflaged”, I had been wearing a camo jacket which was over my district-issued blue polo shirt which says, in large letters on the back, “POLICE” and has a small BUNA ISD POLICE logo on the left front breast. Once I made my way back to the front of the school it was removed. KJAS also contradicted itself in its biased and misleading article, as it states one time there were camouflaged officers then another time states that I was the only one dressed in camo. Let’s not let the facts stand in the way of a good story though.

Fact, there were 911 calls reporting somebody dressed in camo who was not obviously a police officer. Maybe if face diapers hadn’t been mandatory, his coworkers would have recognized his face. 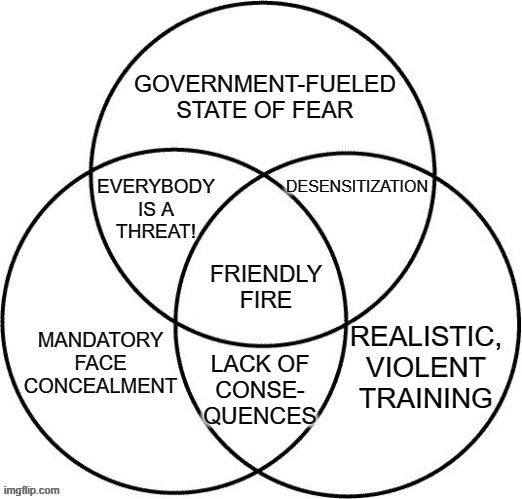 Which is it, Henderson? Were you just checking whether the doors worked or were you trying to incite a “natural reaction”?

4. To those saying I should have notified someone, that’s not how things work. I’m not running or in charge of anything and it’s my job, especially as low man on the totem pole, to do as I’m asked and not question if the proper plans or steps have been taken. My assumption was that since this was a SCHOOL SANCTIONED EVENT, those steps had been taken prior to me being involved in this. My fault lies in believing that had been done.

The old “it’s not my fault, I just work here” excuse.

5. To those who have chosen to believe the lies being perpetuated by some on KJAS and other sites, I’m curious to know how you view CNN, MSNBC, and other mainstream media sources in their treatment of our President. I’d be willing to bet a very large percentage of you call them for what they are-fake news-yet here you all are, shoveling in more lies without even stopping to think that there is ALWAYS more to the story.

Now that’s an interesting wrinkle, appealing to Trump as if CNN’s lies have anything to do with being a mindless police drone in Texas. A(nother) mark of immaturity.

6. Some have called for Mark and I to be fired. I say if you can do this better, feel free. Come on out, lend your expertise. With all the law enforcement experts there should be no shortage of willing volunteers. Just don’t try your hand at investigations because based on what I’ve seen just from this one incident, most would do a piss poor job at gathering facts before pronouncing guilt.

Dude, don’t dress like a terrorist without telling anybody just to check if the staff have “natural reactions” then defy your critics to outperform you.

7. To those who know me (and those who don’t) and have offered words of encouragement, it is more appreciated than you know. To those who don’t know me yet still feel somehow qualified to weigh in on something you didn’t witness nor have reliable information about, your opinion and 99 cents will get you a cup of coffee anywhere in town. God knows the truth and that’s all I’m concerned with.”

I don’t know him yet still feel somehow qualified to explain the necessity of being easily identifiable while behaving suspiciously. Probably because as a utility worker, I was in the habit of being rather casual about going through peoples’ properties, which is why I wore a very obvious company uniform, announced myself and made noise while I worked for no reason than to ensure that I wouldn’t accidentally scare anybody into calling 911 and describing me as a home invasion in progress. Never happened once, I’m glad to say.

While it’s nice that Henderson didn’t grovel, the militarization of police will continue to intersect poorly with the government inciting a permanent state of fear in the general public.

One thought on “I Called It: Active Shooter Stupidity”