For your Halloween enjoyment!

A schoolteacher in France was upset after he was told he could not teach kindergarten any more because children under six years of age “could be frightened by his appearance.”

…has had his body, face, and tongue completely covered in tattoos and even had his eyes surgically turned black. 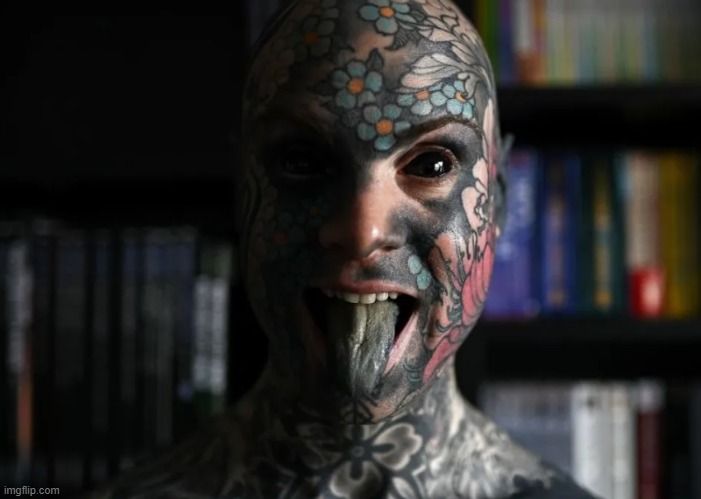 Yet he told Reuters the school’s decision to remove him from his previous post was “quite sad.” Most of his students are “cool” with his appearance and are able to see past it, he argued.

“All of my students and their parents were always cool with me because basically they knew me,” said Helaine, who has spent an estimated 460 hours under the tattooists’ needles. “It’s only when people see me from far away that they can assume the worst.”

Yes. Exposure to evil leads to acceptance of evil. That’s why letting freaks teach kids is a bad idea.

Helaine was reportedly teaching kindergarten at the Docteur Morere Elementary School in the Paris suburb of Palaiseau when the parents of a three-year-old child complained to school authorities that their son had nightmares after seeing him. The child was not a student of Helaine’s.

According to the Reuters report, a couple of months later, the school informed Helaine that he would no longer be able to teach kindergartners due to his appearance. A spokesman for the local education authority expressed that children under six years of age “could be frightened by his appearance.”

“I think the decision they took was quite sad,” he said.

Nevertheless, Helaine is determined to continue teaching, and an agreement made with the school allowed him to stay on as a teacher for children over six years old.

France almost impressed me by recognizing evil as swiftly & accurately as a three-year-old. Alas, that bar was too high.

“I’m a primary school teacher … I love my job,” he told Reuters.

Not as much as extreme body modification in order to look demonic.

He has no plans to stop tattooing himself, either. Helaine said he started getting tattoos when he was 27 after he went through what he called an “existential crisis.” And since then, it has become his “passion.”

Now he hopes that his students will be inspired because of him to be more accepting of those who are different.

“Maybe when they are adults they will be less racist and less homophobic and more open-minded,” he said.

The last two sentences, possibly the last four, are what made this a post. I fully admit that circus freaks are people too and can be fun to stare at… 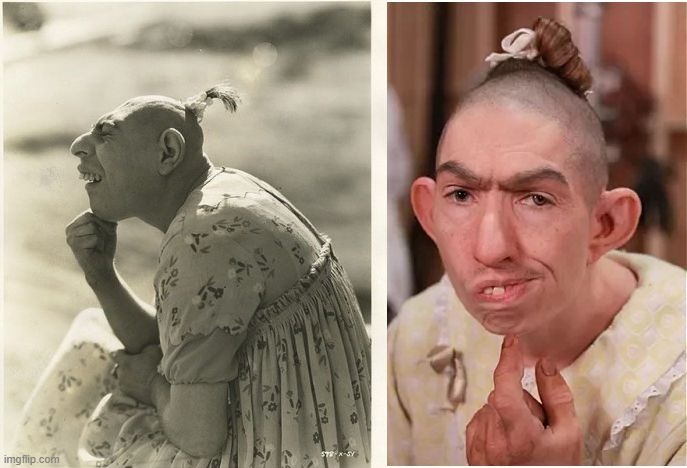 …but they are simply not normal people. We can have sympathy for Pepper here because, unlike Freaky Hoodie, Pepper didn’t hit himself with the ugly stick after an “existential crisis” made self-mutilation into his “passion”.

Maybe he’s not fully demon-possessed but frankly, do we need a scientific, repeatable blood test before deciding? He’s a walking catalog of psychiatric problems who wants to be around children in order to teach them that his sicknesses are normal. That’s good enough.

3 thoughts on “Freaky Hoodie And the Kiddies”