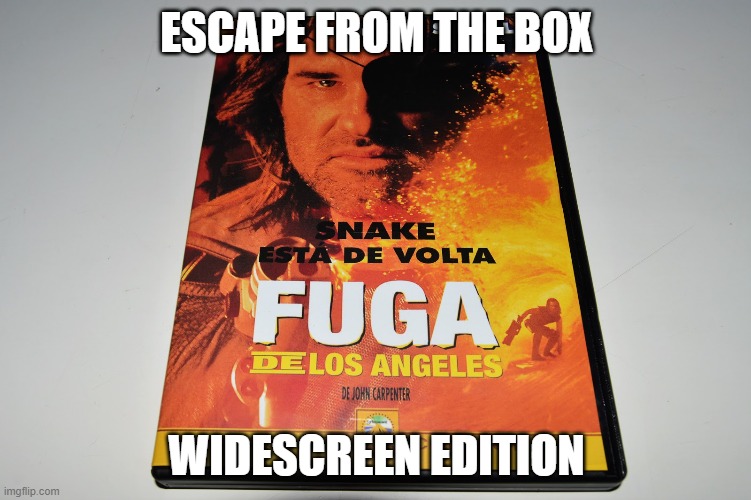 Feminists have built a Man Box meme, challenged men to escape it and continually tried to tighten it up when we did. And when I say “feminists”, I mean “Scientific American”, “Journal of Preventative Medicine” and “University of Pittsburgh”.

I miss the ’80s action flicks.

Researchers at UPMC Children’s Hospital of Pittsburgh and Promundo-US found that men who harbor more harmful attitudes about masculinity—including beliefs about aggression and homophobia—also tend toward bullying, sexual harassment, depression and suicidal thoughts.

The study, published today in Preventive Medicine, is based on the “Man Box” Scale developed by Promundo-US, the U.S. member of a global consortium dedicated to promoting gender equality and ending violence, as a way to measure harmful norms and stereotypes about masculinity. The 15-item scale encompasses themes such as self-sufficiency, acting tough, physical attractiveness, rigid masculine gender roles, hypersexuality, and control.

Already you can read through the lines. Real men aren’t self-sufficient? Are ugly? Think fags aren’t masculine? That says more about the male whores, strike that, Y-chromosome-present gender-nonconformists who wrote this than anything about masculinity.

“While there has been a lot of discussion around harmful masculinities in the media and in the research community, no one has agreed on a standardized way to measure the concept,” explains Elizabeth Miller, chief of adolescent and young adult medicine at UPMC Children’s Hospital. 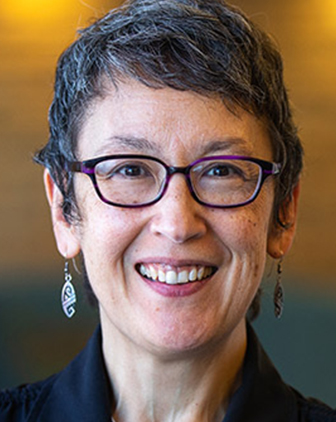 The idea of the Man Box originated in the 1980s. Paul Kivel and his colleagues at the Oakland Men’s Project developed the “Act Like a Man Box” activity as a way to discuss how society tells men they ought to be. Since then, activist Tony Porter helped popularize the term in a TEDWomen Talk and his book “Breaking Out of the ‘Man Box’: The Next Generation of Manhood.” 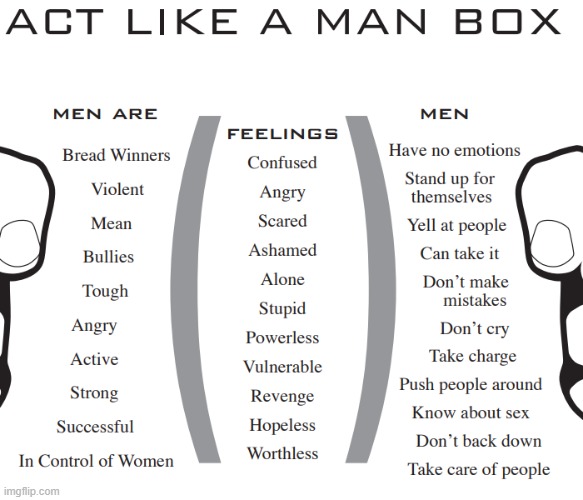 Obviously a male feminist’s effort to be seen appeasing women while turning his tiny dick into a virtue. “I’m a good man because I cry and don’t understand sex and do as I’m told! That’s why I don’t feel ashamed of myself anymore.” Believe it or not, that is what they actually tell themselves.

When Man Box Mk 1 inevitably proved too complex, crude and mock-able, the cuckolds–the Good Men Project, specifically–stepped in to assist with their own humiliation. Because real men are neither tough nor successful!

One of the primary reasons that boys and men gay bash and bully queers is that they need to perform masculinity in order to show the world that they’re in the Box.

I’ve been teaching workshops on male gender socialization for about 15 years or so. The foundation of my presentation is the Act Like a Man Box, which I learned about from Paul Kivel’s book, Men’s Work: How to Stop the Violence That Tears Our Lives Apart. I like calling it the “Act Like a Man Box,” rather than “The Man Box” (which is a title I’ve also seen used for the basic idea) because it highlights how masculinity is a performance.When I do this exercise, I ask the group to brainstorm words that describe “real men.” And while I influence the responses by asking leading questions like “what does he do for a living?” 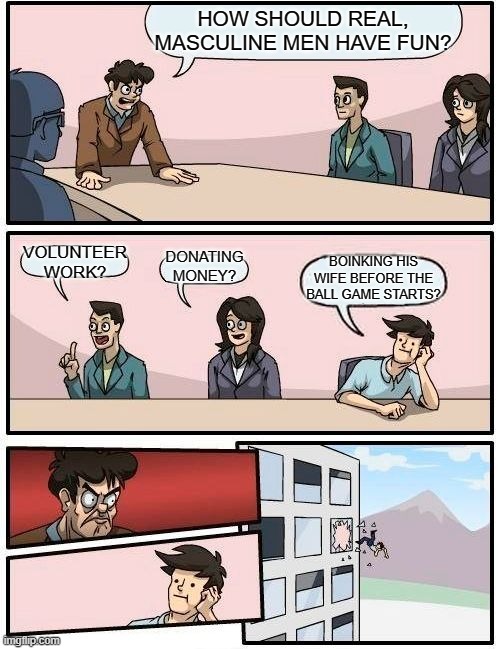 “the responses have been pretty consistent, regardless of the age, gender mix, sexual orientation, or racial makeup of the group. As long as the participants grew up in or have spent significant time in the US, they know what this guy looks like: 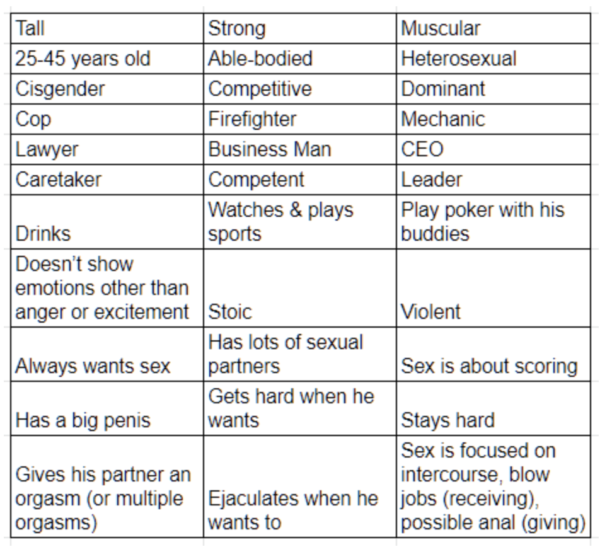 Mk 2 is not much of an improvement. No healthy male describes himself as cisgender and it’s still clunky to apply. Thankfully, Chuck proceeded straight to Mk 3:

After we come up with this list, I ask the group to name the things that men are called if we’re not all of these things. Here are some of the more common responses: 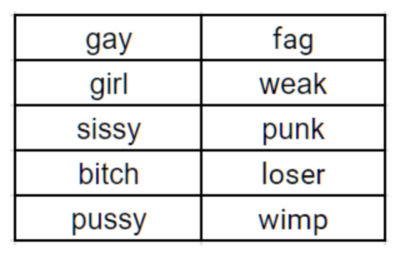 Much better, if from a negative perspective, because being masculine means NOT ACTING FEMININE.

Since the logic of the box is an either/or, you’re either all the way in or you’re all the way out.

Binary thinking is Social Justice thinking. “If you disagree with ANYTHING I SAY, or don’t agree STRONGLY ENOUGH, then YOU’RE A NAZI!”

On the other hand, all of the words on the outside fit into one of three groups: gay, female, loser. I think that says pretty interesting things about homophobia and sexism.

Oh, you think you believe in science? Show me the “Questioning” sex chromosome. How about that Gay Gene that “scientists” suddenly stopped talking about once women got upset about transsexual men overrunning womens’ sports?

How to Fight Toxic Masculinity

That byline is not a mockery, it’s what SciAm actually printed.

Toxic masculinity is best described as a box. It’s narrow, rigid, and men have to contort themselves to fit inside it.

It’s better described as an 80’s action flick, less Steven Seagal. Being strong feels GOOD, the world is a little smaller every day and most social problems can be solved with a smokepiece and a pithy one-liner.

To fit in the man box of toxic masculinity, a man must live by a particular set of beliefs and behaviors:

Suffer pain in silence
Have no needs
Never lose
Show no emotions other than bravado or rage
Don’t depend on anyone
Don’t do anything that could be construed as weakness
Never snitch.

Now, there is a difference between traditional masculinity and toxic masculinity: There is nothing toxic about working hard, providing for one’s family, winning at sports, or being loyal to friends.

ABSOLUTELY a female idealization of masculinity. Real men pay Barbie’s bills while being a winning hunk that she can tolerate touching at bedtime.

Recently, the issue of harmful masculinities received widespread attention in response to the 2018 American Psychological Association’s (APA) Guidelines for Psychological Practice with Boys and Men, which presented a series of steps health care practitioners should take to improve the psychological care of boys and men. 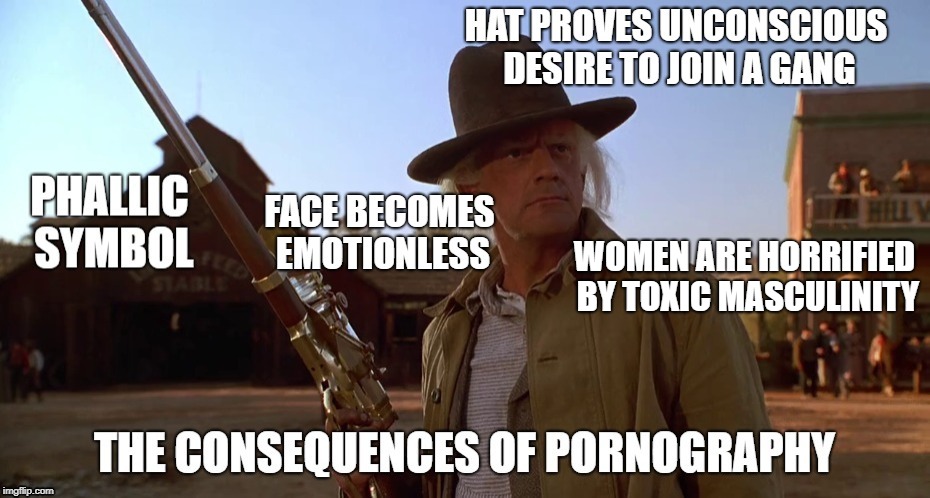 I didn’t savage that APA article in order to prove I was a man. I savaged it BECAUSE I was a man.

Using 2016 data from more than 3,600 men ages 18-30 across three countries, this study found that higher Man Box Scale scores were associated with up to five times higher rates of verbal, online or physical bullying, as well as sexual harassment. Men with higher scores were also about twice as likely to experience depression or suicidal ideation.

“These findings highlight how detrimental harmful masculinities can be to the people who endorse them, as well as their peers, families, and communities at large,” said lead author Amber Hill, Ph.D., fourth-year medical student at the University of Pittsburgh School of Medicine. “It’s important to remember that individuals of all genders are influenced and impacted by the heteronormative society that we live in.”

Amber Hill is why masculine men experience more depression or suicidal ideation, because we’re hated by our society ruled by toxic, man-hating radical atheist dykes like her.

To help clinicians more efficiently monitor their male patients’ attitudes, the researchers developed a shorter version of the survey

…including only the five items that had the strongest associations with violence and poor mental health:

1. A man shouldn’t have to do household chores.

2. Men should use violence to get respect if necessary.

3. A real man should have as many sexual partners as he can.

4. A man who talks a lot about his worries, fears, and problems shouldn’t really get respect.

“We have found a way to measure the concept of the ‘Man Box,’ which allows us to clearly see that when men embrace stereotypical ideas about manhood, they’re also more likely to harm the well-being of others, as well as impact their own health in adverse ways,” said Gary Barker, Ph.D., president and C.E.O. of Promundo-US. 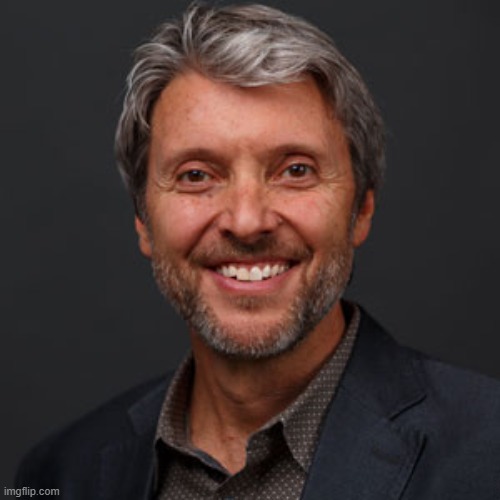 “As health care providers, researchers and public health workers, we now have a valid tool in our pockets to help us measure progress toward changing harmful stereotypes and advancing both gender equality and healthier versions of masculinity.”

Promundo is, paraphrasing, “an international organization of socially like-minded people that helps them coordinate actions while having different employers”. Not hard to read between those lines.

Penis envy is a jealous god. And like God Himself, we men are not so easily put inside a metaphorical box.

Actually, we are. Show up naked and bring beer, Barbie, and we’ll even forgive you messing up dinner. Also like God Himself, we get mystified at why people try to control our behavior with words when making us happy is so dang easy.

One thought on “Evolution Of the Man Box”