At first, I thought this would be yet another salvo in my distrust of the driverless technology being forced upon male America. It soon morphed into a perfect example of virtue-signaling gone wrong!

Driving the 2021 Cadillac Escalade was one of the most stressful experiences of my life: High anxiety with the king of oversized SUVs

When Cadillac reached out recently with an offer to test out the new 2021 Escalade for a day, I eagerly responded in the affirmative. I wanted to try out the latest version of the automaker’s partially autonomous driver assist system, Super Cruise, as well as all the other high-tech bells and whistles (augmented reality? 38 inches of OLED screen?) that Cadillac was stuffing into its flagship SUV.

Oh yeah, baby, smoking gun! “This thing is like a cruise missile that thinks it knows where it should go but wants a driver to blame just in case!”

Instead, I got one of the most stressful driving experiences I’ve ever had. I don’t consider myself a timid driver, but being behind the wheel of this 6,000-lb behemoth gave me high-grade, flop-sweat-inducing anxiety. I’ve never ridden on the back of an elephant before, but driving the 2021 Escalade may be as close as I’ll get.

Wait, what? A news outlet’s designated transportation reporter got scared because a massive SUV turned out to be massive? 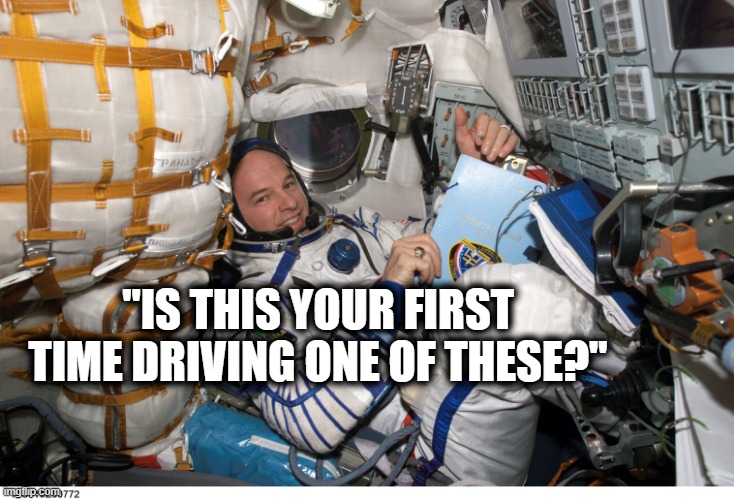 Words cannot describe how gargantuan the new Escalade is, so numbers will have to suffice. The 2021 Escalade is nearly 18 feet long bumper to bumper, and almost six-and-a-half feet tall. This represents a growth spurt from the previous model year, including an additional four inches to the wheelbase (the distance between the front and rear wheels), 2.6 inches to the overall length, and 2.4 inches taller in terms of overall height. Or, as Cadillac’s own marketing materials boast, “the largest and longest Escalade ever.”

Why would driving that be stressful? Like driving an Abrams tank, it’s not YOU who’s going to get hurt by your driving.

Oh, right. Insurance. A legit concern for the law-abiding and honestly employed, which explains Andrew never bringing it up.

Sitting in the driver’s seat, it’s easy to feel disconnected from the outside world — mostly because you can’t see a lot of it. The grille was like a sheer cliffside, obstructing my view several feet out in front of the wheels. An entire kindergarten class could be lined up in front of this vehicle and I wouldn’t see them.

This is not hyperbole. Last year, a local television station measured the front blind zones of many popular vehicles, from family sedans and minivans to large SUVs and full-size pickup trucks. The Escalade had the largest front blind spot of 10 feet, two inches, with the driver sitting in a natural, relaxed position. It took 13 children seated in a line in front of the Escalade before the driver could see the tops of their heads.

Andrew has a curiously specific fear of running over little kids. Also, a curious assumption that kids like to play in the blind spots of moving vehicles. It’ll happen by freak chance but come on, nobody is going to accidentally speedbump over a kindergarten class.

I tweeted out a picture of my three-year-old son standing next to the Escalade to illustrate how dangerous this blind spot could be. Reactions ranged from flabbergasted (“That ratio of grill height to windshield height is insane,” one tweet read. “Made to kill.”) to people sharing their own dangerous close encounters with oblivious Escalade drivers.

Do you have any intention of actually driving the vehicle you were tasked to test-drive, Andrew?

And by the way, 9 out of 9 Internet security experts recommend you not post pictures of your little kids on social media. The best way to protect them from Internet predators is to conceal their existence, not announce it unsolicited. Since we’re acting concerned about little kids and all.

My initial interest in test driving the new Escalade was to try out the latest version of Super Cruise, the partially autonomous, “hands free” driver assist system. Cadillac has recently rolled out an enhanced version of Super Cruise that includes automatic lane changing, and I was eager to see how it has improved and how it measured up against Tesla’s Autopilot and other advanced driver assist systems.

But the Enhanced Super Cruise won’t be showing up in the Escalade until 2021. And my colleague Sean O’Kane has already gone over the Escalade’s 38-inch OLED display with a fine-toothed comb. So that leaves me to write about the driving experience — and that is tied inextricably to the bloated size of this vehicle.

Quelle surprise that their super-safe automated driving system still has a few bugs and has been briefly delayed. Again.

But it’s too late. My attention is now focused on this reviewer and his obsession with the vehicle’s “bloated size”.

I don’t mean to pick on Cadillac here, because this is a problem that is endemic to the entire auto industry. This trend in colossal vehicle sizes — particularly the very tall, square front end found on most large SUVs and trucks — is testing the limitations of our infrastructure. While driving the Escalade, I felt as if I could barely stay in my own lane. The massive width (6.75 feet, not including the mirrors) had me in a cold sweat while driving on narrow, two-lane suburban roads. The Escalade also could barely fit in my driveway, which wasn’t a total shock. As USA Today recently reported, SUVs and pickups are getting so large that they’re struggling to fit into some home and parking garages and public parking spaces.

So he did drive it around the block, at least. How’d it corner? Were all the gadgets distracting or well-integrated? Was the cargo area easy to access? Did you take it off-road and get some mud on the tires?

“It barely fit in my driveway.”

There is a clear correlation between vehicle design and the recent spike in pedestrian deaths. While the people driving SUVs are slightly safer (1.6 percent decrease in SUV occupant deaths in 2018, according to the National Highway Traffic Safety Administration), the number of pedestrians killed by those drivers has skyrocketed by 81 percent in the last decade, according to a report released last year by the Insurance Institute for Highway Safety.

That’s mostly because of the way SUVs are designed: larger bodies and higher carriages mean pedestrians are more likely to suffer deadly blows to the head and torso.

And totally not because of the way SJWs choose to protest: in traffic. 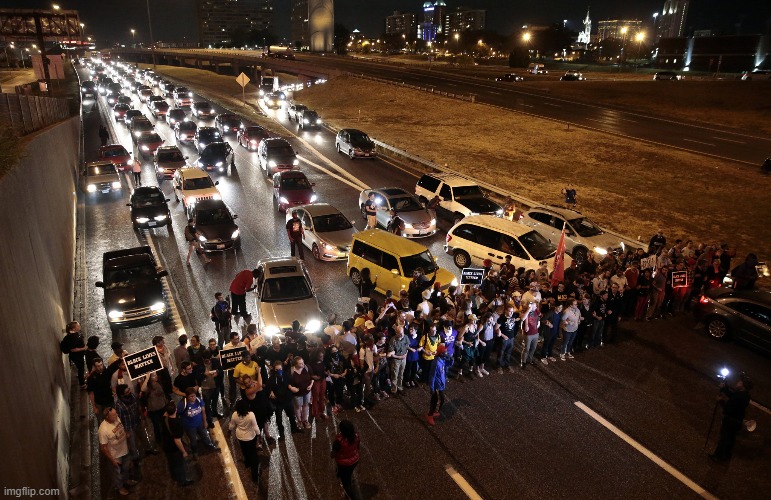 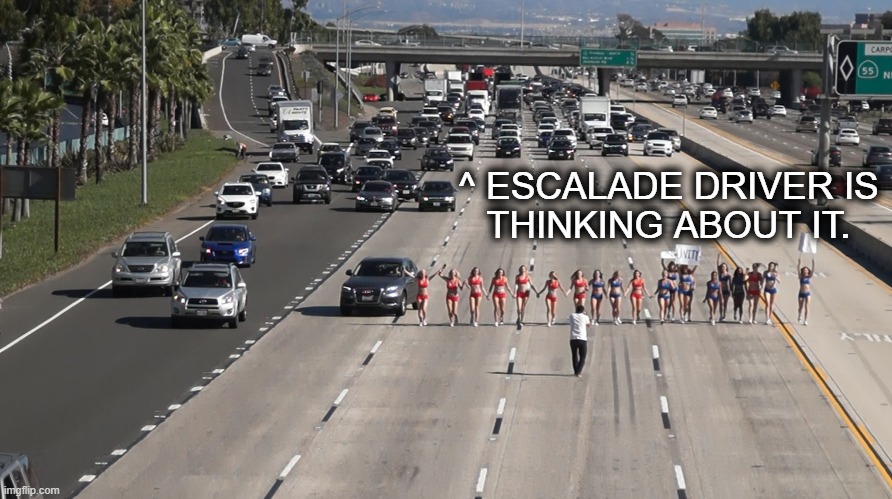 Higher clearances mean victims are more likely to get trapped underneath a speeding SUV instead of pushed onto the hood or off to the side.

You protesters are not victims.

Meanwhile, if you want high clearances and all-wheel drives to decline in popularity then feel free to fix the roads.

Speed is also a factor because SUVs have more horsepower than a typical sedan.

A recent investigation by USA Today and the Detroit Free Press found that the growing popularity of SUVs accounts for the alarming rise in pedestrian deaths.

If he was correct in this then there would be an alarming DECREASE in pedestrian INJURIES. Since they’re now being run over instead of tossed to the side.

To Cadillac’s credit, the Escalade is stuffed with the latest in safety technology. Multiple cameras embedded around the vehicle are used to create a digital overhead image of the Escalade when either in drive or reverse at low speeds. This view is projected onto the screen in the center console, giving the driver a more complete picture of their surroundings than what is actually available from the front seat. Haptic sensors in the driver’s seat will vibrate when there is a pedestrian crossing in front or behind the vehicle, or if there is a car behind you when you’re pulling out of a parking spot.

These are important features to have in a vehicle this large, but they’re also just workarounds. … Manufacturers know that these types of vehicles are more dangerous to pedestrians and cyclists, but they keep making them because people keep buying them.

Capitalists are EVIL! because they make unsafe cars that are only safe to drive because they have safety features.

Maybe if your efficiency-sized electric car has windshield wipers then it hasn’t been designed well, either?

Cadillac says it is responding to customer demands for more interior space and cargo room.

Does Cadillac feel stupid yet for, as mentioned at this article’s beginning, reaching out to a known Social Justice Warrior with an offer to test-drive the new 2021 Escalade for a day?

I asked David Schiavone, Cadillac Escalade product manager, why the Escalade’s front blind spot in particular was so egregious. “For me, this is new,” he responded. “Your comment catches me a little off guard. Is it because they’re so tall in the front?” After I defined what I meant by front blind spot, Schiavone replied by ticking through a list of all the alert systems and safety cameras, including front pedestrian braking, 360-degree cameras, and night vision. Again, these are all commendable features, but they wouldn’t be necessary in a vehicle with a safer overall design.

Nope, they don’t feel stupid. They feel surprised that an SJW attacked them in response to their offer of a free test drive.

The 2021 Cadillac Escalade is likely to win accolades for its “luxury” and “swagger.” It will be praised for its “world-class interior” and commitment to providing its customers with the most cargo space in its class. But beneath all that, the Escalade is still an oversized, gas-guzzling SUV in a country with far too many of those on the road already.

Andrew is so virtuous that he barely even drove the Escalade, so far as he’s willing to admit. Everything he said could have been said from the far side of the dealership. Through a microphone. While standing in traffic.

Will Cadillac learn the lesson and begin offering free test drives to potential customers instead of “you’re a Nazi because your SUVs are too big!” politically-vetted allies?

One thought on “An SJW Test-Drives A Land Yacht”