Imagine my surprise when after doping up on Sunday Morning espresso and logging into my blog, the most-viewed post was an oldie about a small-town pastor who decided the world needed more justice and went looking for a politician to bestow it.

To the surprise of nobody who read that link, Mannes has since contracted a wicked case of Trump Derangement Syndrome.

Shoulda listened to me, Keith. I told you to not see government as your Savior. The cost will be your soul.

HOLLAND — Keith Mannes has given his life to the Christian Reformed Church, serving as a pastor for more than 30 years. He’s done so happily and thankfully.

But on Oct. 11, Mannes gave his last sermon and walked away from ministry among increasing political tension and divisiveness.

Yeah, um… which is it? Did he love the laity of his church or did he quit them in political disgust?

Put simply, he stepped away due to the church’s broad support of President Donald Trump.

Political disgust it is.

While Mannes loves the congregation he served at East Saugatuck CRC for the past four years, he says the church as a whole has “abandoned its role” as the conscience of the state in support of Trump, leading Mannes to step away.

“There’s a quote from Martin Luther King where he said, ‘The church must be reminded that it is not the master or the servant of the state, but rather the conscience of the state,’” Mannes said. “That just hit me hard because I think, broadly, the white evangelical community in our country has abandoned that role.

Keith, do you remember a privileged white boi, back in the day, who said something about logs in your eye? You clergy have failed as completely as you possibly could to be the conscience of society. Fatherlessness, all-time high. Feral women in authority over men, everywhere. Abortion everywhere. Anarcho-tyranny everywhere. Usury everywhere. Socialism everywhere. Sodomy everywhere. Hundreds of priests deploring the existence of the white men who built this very country, on behalf of racist human parasite welfare addicts. That’s your idea of being a “conscience”: projecting your crimes upon the innocent!

And then Trump got elected, and then the people of Christ that you were trying to quietly smother found a new source of hope and began to struggle.

Go fuck your mother and get bent by the devil, your Father. Call it a family affair then book your ass on Oprah to talk about what a victim you are. You never knew Christ, Pastor Mannes.

“The question of the church largely and how it’s functioned in this moment has been really disturbing. That’s been troubling enough that I need to lay it all down.”

Don’t let the door hit you where the Good Lord split you.

Mannes is not the only Christian feeling the strain. He said he knows several other pastors who are feeling the same things.

In a poll conducted by Pew Research Center from Sept. 30 to Oct. 5, Christian support for Trump had dipped since August.

“…Since August, when the Democrat political machine went into overdrive to discourage white Christians from supporting Trump. It’s been an uphill battle ever since unelected Democrat health directors broke the law to ban Christianity as a health risk. If only we could have stopped them from noticing how much we hate their guts!”

Ironically, I probably did more to undermine that support than Keith. The Bride of Cain is your spiritual advisor, Mr. President? Seriously?

George Lundskow, a [Marxist agitator] at Grand Valley State University who studies the sociology of religion, said support from the religious community is tied to how people view God.

Fixed it. There is not one sociology professor in modern academia who hasn’t taken the Ticket.

Lundskow said that while some of the president’s actions may not align with Christian values, he has aligned himself with conservative Christians by acting similar to how they see God — judgmental and punitive.

What a putrid hypocrite this Lundskow is. Christians support Trump because unlike the Left, he’s not actively banning our existence. Attention, all Commies: we noticed.

“(His actions) don’t seem very Christian, much less conservative Christian,” Lundskow said. “I don’t think it’s about that. It’s something else about religion — whether you see God as punitive and judgmental or the loving, forgiving version of God. That definitely shapes political views as well.”

Yo, George. The Christians didn’t believe their own pastor when he vomited your party line. You aren’t vomiting it any better than he did.

Lundskow said this divide between conservative and progressive Christians based on their view of God is a point of division within the faith in terms of political support.

The professor explained that those who see God as punitive tend to support Trump, saying they see him as strong-willed for the way he attacks opponents and “punishes” people for being poor. Lundskow added that Christians who view God as loving and forgiving tend to be more liberal and progressive, welcoming immigrants and “seeking social justice” for the poor.

Last time I discussed you, Keith, you were just dipping your toe into politics. I thought it was a good sign. You were starting to care about the outside world. I even ruled out TDS at the time.

But now, I can see that what was happening was you looking for political allies to enlist against your own churchmen. You were an EARLY ADOPTER of TDS.

I sincerely hope you enjoy your mortal life, Keith. Be a shame if you went 0 for 2. You have not BEGUN to see Christ the Coming King in His judgmental and punitive mode.

Mannes has been feeling a disconnect between the teachings of the church and the actions of the political candidate it largely supports for years. It started when Trump announced his campaign in June 2015 while descending down an escalator at Trump Tower.

“From the time he came down the escalator,” Mannes said of when he began to feel an internal struggle. “It’s only been building ever since. From the beginning I thought there’s something about this man and the instrument that he is for a lot of things that are just very not Jesus.” 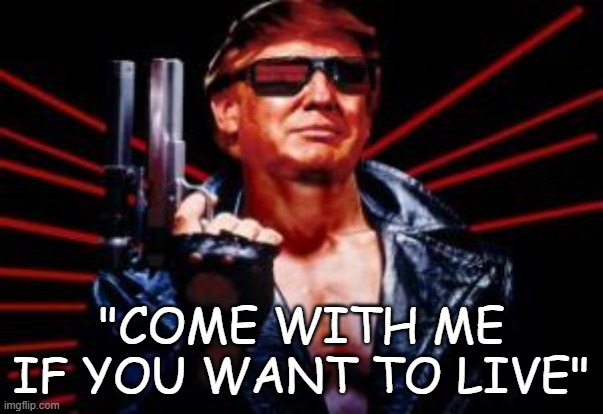 He said the congregation at his church has “saved (his) faith in many ways,” but what he’s seen from Christians nationally has challenged it.

That includes when white supremacists gathered for a rally in Charlottesville, Va., in 2017 which led to three deaths and dozens of injuries, after which Trump said there were “very fine people on both sides.”

Mannes was part of a group of pastors that walked 130 miles from Charlottesville to Washington, D.C., in August, hearing the stories of people there during the 2017 events.

That march was reportedly organized by Al Sharpton. One of many priests who will not be seeing the inside of Heaven.

He called Trump’s photo holding a Bible in front of St. John’s Church in Washington in June, following the use of tear gas and riot control to clear protesters from the area, a “tremendous violation of something deep and holy,” and said it was a key moment in his views.

“It just floors me how church-going people who read the Bible and sing the hymns can show up at a (Trump) rally and just do that deep bellow like an angry mob supporting these horrible things that come out of his heart and his mind. It just began to trouble me so much that I am a pastor in this big enterprise.”

While some, like Mannes, may be turned off by Trump’s actions, Lundskow said many look past them because they believe Trump was sent to be a representative of God.

No. Well, okay, there’s a few goobers on the fringes more interested in results than faith. Get persecuted long enough and even Pontius Pilate begins to look like a savior.

As the tension in his heart and the world around him continued to grow, Mannes said his feelings began to show in his sermons, causing discomfort for some parishioners.

Trying to keep his thoughts internalized became more and more difficult as time went on.

Binary thinking is a trademark problem for Lefties. Christ with His parable of “let the weeds and the wheat grow together until harvest time” didn’t suffer from that. 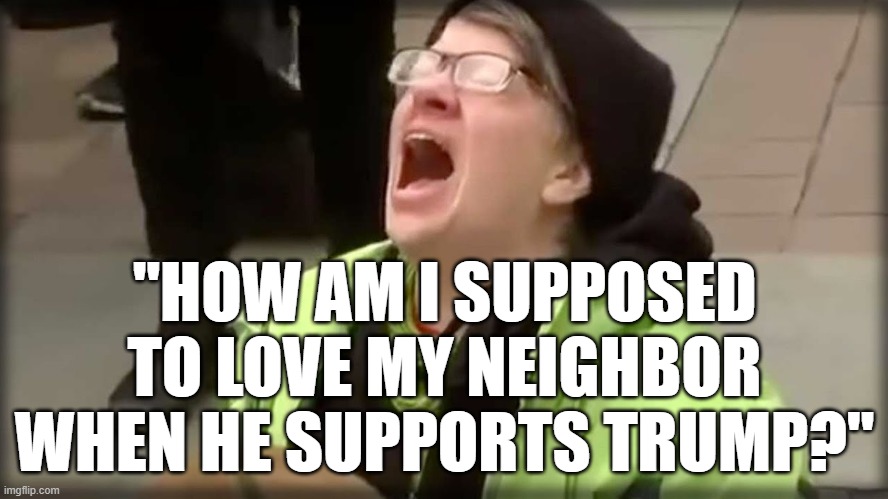 I dunno, Pastor, but maybe the answer is inside this Book. It’s a bestseller!

“What it was really doing was tearing me up,” he said. “I’ve had to be very careful to not speak about these things directly with members of the church.

“It’s not only me, but quite a number of pastors I know are just like, ‘This is it? All this preaching we did about Jesus and there’s this big of a disconnect?’

HAHAHA! See what happens when you don’t care about our opinions? No wonder you “loved your people” when they just kept quiet in the pews.

I think that’s a real burden on a lot of pastors’ hearts. I love these people, I love God, I love Jesus, I love the church, but there’s something happening here.”

And he “just happened” to meet all those like-minded pastors on his pilgrimage to worship the Globalist Narrative of Charlottesville.

Mannes sat down with the elders of his church in September to express the tensions he had been feeling. After a long and emotional meeting, they agreed it was time to part ways.

Ah, to have been a fly on that wall. “You want our church to side with the Christ-banners?”

Mannes says he understands many Christians will vote for Trump, and he will still love those who do, but implores them to think about what it means to be a Christian before making their choice.

That’s a passive-aggressive way of denouncing the laity as false Christians.

He calls on his fellow Christians to be the conscience of the president, whoever it is, and force them to be better than the division that has become common.

A plea for Unity? Pastor must be new to Protestantism.

But good news for Mr. Mannes, I’m right here on WordPress serving as a conscience for society’s leaders great and small, just like you want. It really is what Jesus would do!

“We’re supposed to be the conscience of the president and we have refused to do that,” Mannes said. “I don’t know that a church who believes in Jesus as we do, can abandon its conscience and not say, ‘Mr. President we’re calling you to better than that and you need to call our nation to better than that.’”

A few weeks prior to his last sermon, Mannes spoke with a member of the church, who asked him to reconsider his decision. The person asked him about his plans once he walked away, with no guarantee that the issue will even persist after Election Day.

His conscience, and many highly placed allies with an established history of rewarding those who take the Ticket. Mannes isn’t going to end up homeless or even worse *gasp* in manual labor. He’s a goodwhite Churchian in a sellout’s market, who has been making friends in the correct places for years.

The Two Americas continues to take shape. Coexistence is increasingly not an option.