Now that statues of American culture have been torn down, it’s time for the Left to raise new statues in their place. Remember Lady Justice? 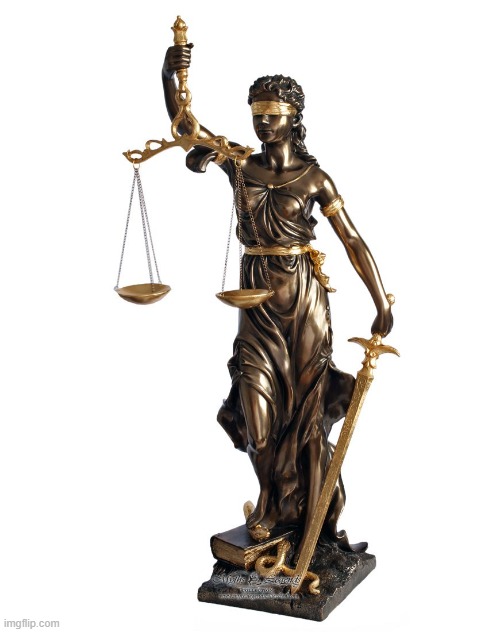 She’s blind to emphasize our justice system’s impartiality. With one hand she weighs the evidence, with the other she executes the wicked, standing upon our nation’s foundation of Scripture. And she is beautiful to behold.

But that was the patriarchal Then. Now means NOW! 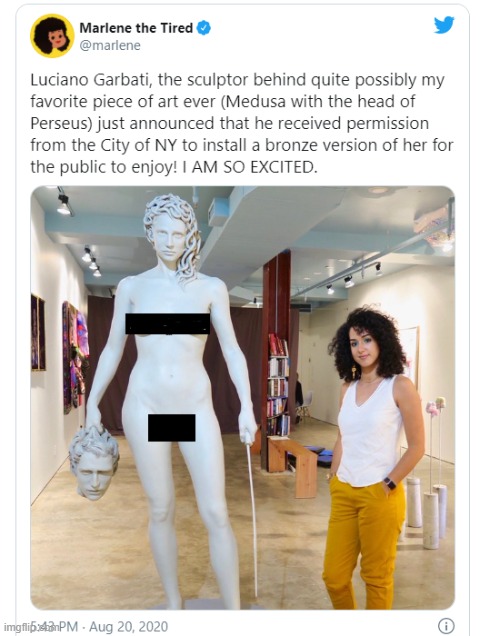 Edited by me to be safe for work.

The new Lady Justice is casually sexual without regard for the innocence of her beholder. With one hand she cuts down men and with the other she displays her conquests. There’s no need to weigh evidence because she is Strong&Independent with a huge, chunky ass! And of course, Medusa wouldn’t be ghastly to behold without a Skrillex haircut.

‘Empowered Medusa’ to Stand Outside Courthouse Where Harvey Weinstein Was Sentenced

Those entering the Manhattan Criminal Courthouse: beware. A seven-foot-tall statue of Greek mythological Gorgon, Medusa, will be greeting you. Twitter user Marlene Bonnelly shared the exciting news of the statue’s home on Thursday evening. Manhattan Criminal Courthouse has seen many trials over the years, including the sentencing of Harvey Weinstein.

Interesting that they mention Weinstein specifically, repeatedly and prominently.

“Luciano Garbati, the sculptor behind quite possibly my favorite piece of art ever (Medusa with the head of Perseus) just announced that he received permission from the City of NY to install a bronze version of her for the public to enjoy!” she announced. “I AM SO EXCITED.”

Someone asked her where the Medusa statue would be erected. “She’ll be 7 feet tall and stand in the park across from the New York County Criminal Courthouse, which is where Harvey Weinstein was tried,” Bonnelly responded.

Which is it? Do you wimminz want to ban pornography or do you want anatomically correct, larger-than-life statues of women intimidating men by letting it all hang out?

Replace the cane with a sword and squint until you can believe she’s good with it… and… Lady Justice 2020!

Medusa is notorious in Greek mythology for having a head of venomous snakes for hair. Anyone who looked into her eyes was turned to stone. As per Greek mythology, she was beheaded by Perseus, and her head was used as a weapon. The image of Medusa’s head has been used in art for centuries. More recently, she became a feminist symbol.

I… I’m okay with this re-imagination of Medusa. Da wimminz ain’t exactly complimenting themselves, now are they? Girl power = ugly beyond tolerance?

Elizabeth Johnston explained Medusa’s significance in 2016 for The Atlantic: “Medusa is widely known as a monstrous creature with snakes in her hair whose gaze turns men to stone. Through the lens of theology, film, art, and feminist literature, my students and I map how her meaning has shifted over time and across cultures. In so doing, we unravel a familiar narrative thread: In Western culture, strong women have historically been imagined as threats requiring male conquest and control, and Medusa herself has long been the go-to figure for those seeking to demonize female authority.“

Wasn’t Lady Justice already a female empowerment figure? No, because she would have given Weinstein a FAIR trial! “You jumped onto his casting couch in order to get his backing, heh, for your career. That’s not rape.”

The location of the statue is the perfect spot, with this message in mind. Following the highly publicized trial of Weinstein, the empowering Medusa statue will serve as a social justice symbol for those who have been silenced in the past.

On February 24, disgraced movie mogul Weinstein was found guilty on two sex abuse charges. Weeks later, he was sentenced to 23 years in jail for the crimes he was found guilty of. He is serving his time at Wende Correctional Facility near Buffalo in upstate New York.

Bitches be vindictive. I’m surprised they didn’t cast Weinstein’s head in place of Perseus’. *checks* WHAT THE… 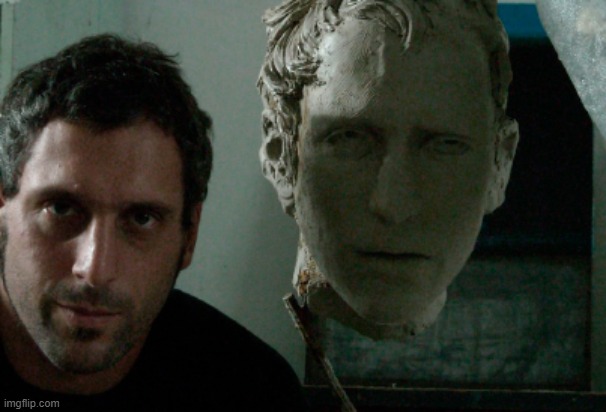 Did sculptor Garbati use HIS OWN head as a model for Perseus? He worships the feminism that HE KNOWS will destroy him as a man? White knight to the max!