I was saddened but not surprised that Michigan Gov. Gretchen’s tyranny being declared illegal ultimately resulted in jack diddly. But there is yet hope because Gretchen is hanging on so delicately that the FBI has resorted to false flagging their own allies to give her some sympathy.

Oops, did I say the FBI has allies?

Right from sentence one, that doesn’t sound like the proverbial white supremacist. What good would kidnapping her do?

I’ll show one picture to explode this whole case but let’s build up to it.

All men with the exception of Croft are residents of Michigan. Croft lives in Delaware.

Federal authorities and Michigan Attorney General held a press conference at 1 p.m. on Thursday to discuss the operation and arrests of seven other men connected to a Michigan militia group, Wolverine Watchmen.

According to the complaint, Croft, Fox, and about 13 other men gathered in Dublin, Ohio, on June 6 to form a society that followed the U.S. Bill of Rights in an effort to be self-sufficient.

That makes no sense at all.

The group discussed ways to achieve this through violent means, the complaint says, and discussed plans.

My first thought upon hearing that there were 13 Right-Wing Terrorists of whom only six were charged is that the seven were all FBI informants. It wouldn’t be the first time that ratio was achieved but the previous paragraph makes this sound like the six troublemakers tried to lure in a real militia who recognized crazy when they saw & heard it and quit on the spot.

When that picture comes, you too will take one look and opt out of ANY future association.

“Several members talked about murdering ‘tyrants’ or ‘taking’ a sitting governor,” the FBI wrote. “The group decided they needed to increase their numbers and encouraged each other to talk to their neighbors and spread their message. “

The FBI said Fox then reached out to a Michigan-based militia group and was focusing on Governor Whitmer.

Yep. They tried to lure in a real militia that wanted none of… eh, here he is. 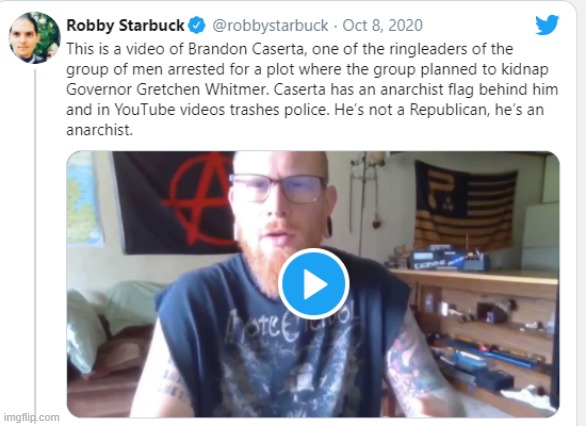 Kudos to this Robby Starbuck guy, of course. A tatted yet scrawny loser with big ear gauges posting on social media in front of a Pantifa flag? Not. My. People. There’s no way this really is a vast, right-wing conspiracy.

Here’s the video for the curious, although I suspect it’ll go down before long.

This is a video of Brandon Caserta, one of the ringleaders of the group of men arrested for a plot where the group planned to kidnap Governor Gretchen Whitmer. Caserta has an anarchist flag behind him and in YouTube videos trashes police. He’s not a Republican, he’s an anarchist. pic.twitter.com/J1vE2qGYL7

“Fox said he needed ‘200 men’ to storm the Capitol building in Lansing, Michigan, and take hostages, including the Governor. Fox explained they would try the Governor of Michigan for ‘treason,’ and he said they would execute the plan before the November 2020 elections,” according to federal officials.

Which is it, hostage or execution?

According to the FBI, it learned of the plan through confidential sources and undercover agents over several months who attended militia group meetings.

And social media. Likely as not, they were monitoring their ‘protesters’ for signs that any of them were going off the plantation of acceptable targets. Blaming them for being right-wingers would turn that negative into a positive.

The FBI said the militia group would hold field training exercises on private property in remote areas of Michigan, where they would engage in firearm training and tactical drills.

At one point, the FBI said the group had a meeting in Grand Rapids in the basement of a shop that was accessed through a trap door hidden under a rug on the main floor.

Seriously? Somebody was living a movie inside his head.

At that business, the FBI said they discussed the plan for the Capitol and planned to use “Molotov cocktails” to destroy police cars.

2. That’s what Antifa does.

…and asked the group to be linked with other systems and asked for ideas of what they can do.

“Let’s overthrow the government. Step 1, publicly announce the conspiracy on Twitter. Step 2, recruit some people who know what they’re doing because this IED I made with black powder and a used condom don’t work.”

The militia group also met in Ohio and Wisconsin, the FBI reported, and on July 11 in Wisconsin, Croft and another member tried to make an improvised explosive device using black powder, balloons, a fuse, and BBs for shrapnel.

According to the FBI, there are recordings of a discussion to attack a Michigan State Police facility and shooting up the Governor’s vacation home. Fox said in a recording that the best opportunity was to “kidnap her outside her vacation home”, the FBI said.

That’s why they planned to assault the Capitol with 200 men, because her vacation home was the best opportunity? All these plans got spitballed around… it’s hard to believe it’s more than an antifascist trying to impress a girl.

The FBI also said they would take her somewhere in Wisconsin for a “trial.”

The FBI added that to ensure they could retain jurisdiction over their own false flag. Crossing interstate lines during the commission of a felony, y’know. They surely wouldn’t have held her trial in, oh, the remote Michigan training facility they reportedly had.

On July 27, 2020 Fox asked in an encrypted group chat, which included Garbin, Harris and Franks “Okay, well how’s everyone feel about kidnapping?” No one responded to the question.

On July 28, 2020, Fox told CHS-2 over the phone that he had narrowed down his attack targets to the vacation home and the summer residence. The call was not recorded. The same day, Fox posted the following to a private Facebook page: “We about to be busy ladies and gentlemen . . . This is where the Patriot shows up. Sacrifices his time, money, blood sweat and tears . . . it starts now so get f—ing prepared!!”

According to the FBI, the group found her vacation home in late August, took pictures and video as they drove by, and found out how close police were to the home.

How did they find it? None of them sound like private detectives. Although the FBI would have had access to that info… gotta make the threat look credible….

In a mid-September meeting, the group met, made, and detonated an IED that was surrounded by human silhouette targets, the FBI said, and planned to put an IED under an overpass to divert police from the vacation home along M-31.

According to documents, Fox wondered whether the group just needed to “party it out, make a cake and send it,” in what CHS-2 believed was a coded reference to sending a bomb to the Governor.

There’s every chance he did mean cake, if his latest drug of choice was weed.

“We’re gonna topple it all, dude. It’s what great frickin’ conquerors, man, we’re just gonna conquer every f—ing thing man.” Fox and Garbin further discussed the need for the government to collapse because it has become so tyrannical.”

That’s not the motivation of any right-winger. Any of us who want to watch the world burn, can sit down in front of Portland TV and eat a sandwich.

During the planning, the group had a conversation with an undercover officer that it would cost about $4,000 to get the explosives they want to blow up the bridge leading to the vacation home and they agreed to use the next few weeks to raise money, the FBI said.

In a recorded call, Fox told an FBI source that he bought an 800,000-volt taser that he was planning to use in the kidnapping, the FBI said.

A one hundred-million-volt taser, totally legal and currently 10% off. A gentle reminder that there are only 76 shopping days left until Christmas!

The FBI is corrupt to its core but accusing its own Antifa “assets” of being right-wingers is a new low.