The Eddie Gallagher saga reignites! Admiral Collin Green, who conspired against Eddie alongside now-disgraced SECNAV Richard Spencer, has salved the butthurt of his defeat by literally neutering the Navy SEALS.

This new chapter begins in February.

The head of Naval Special Warfare Command, who challenged President Donald Trump over stripping retired SEAL Chief Eddie Gallagher of his SEAL status last year, will step down from his post in September, according to a report published by The Intercept on Saturday.

Rear Adm. Collin Green, who took the helm of NSW in 2018, made headlines in November when he and Navy Secretary Richard Spencer reportedly vowed to resign or be fired rather than follow Trump’s instructions to not revoke Gallagher of his SEAL Trident, the symbol of his SEAL status, after a high-profile court martial acquitted Gallagher of murder charges while finding him guilty of posing for a picture with a corpse.

This tactic–throw in a tiny, surefire conviction to avoid the humiliation of the accused being fully vindicated–is happening again with Kyle Rittenhouse. Recall that Kyle has been charged with three counts of murder, two counts of felony reckless endangerment… and one count of possessing a firearm under age 18.

One of those charges is not like the others.

According to The Intercept, Green’s time as NSW commander had been extended from two years to three, but his decision to step down from the post means he will decline the third year.

He kept his vow to resign in lieu of being fired. Surprisingly honorable.

He will likely be replaced by another two-star SEAL admiral, H. Wyman Howard III, a former commander of SEAL Team 6, according to two people familiar with the Navy’s pick. Howard is currently in command of Special Operations Command Central.

H. Wyman Howard III? Sounds like a whiny trust-fund brat who got sent to military school.

Howard has his own questionable past. When he was a squadron commander at SEAL Team 6, Howard solicited donations to procure expensive, hand-made hatchets for his operators, and encouraged them to “bloody the hatchet” on operations in Iraq and Afghanistan, The Intercept previously reported. Later, SEAL Team 6 commanders received internal reports that Howard’s men were using the hatchets to hack dead and dying militants. SEAL Team 6 did not conduct any investigations based on the allegations.

Okay, maybe he’s not a whiny trusta-fundie. Anyway, what a difference seven months can make:

Oh, okay. He resigned because termination would have prevented his remaining an insider in the bureaucracy with help from his highly placed friends. I take back that “surprisingly honorable”.

An East Coast cocaine scandal. Sexual assault allegations in Iraq. A war crimes prosecution that earned the ire of the president and brought down the Navy secretary.

All those came to light under the tenure of Rear Adm. Collin Green, the commander of the Navy’s elite SEALs, who left his job this month in a lateral move to Special Operations Command in Florida. He will be chief of staff there.

Though Green’s departure was premature — he had about a year left to go in the SEALs position — the fact that he’s remaining in the special operations community is noteworthy given storm of controversy he oversaw, and tried to correct, while in command.

The Deep State protects its own. I’m surprised that SOCOM hasn’t tragically reported his unexpected demise in a training accident at the top of a staircase. Perhaps Gallagher was the last of his breed.

Then, several SEALs from San Diego’s SEAL Team 7 told their superiors that their platoon chief, Edward Gallagher, stabbed and killed a wounded teenage ISIS fighter and shot civilians during their 2017 deployment in Iraq. In September 2018, Navy SEAL Chief Edward Gallagher was arrested by Naval Criminal Investigative Service agents and ordered confined until trial by Green.

A Navy judge later upheld that order, only to be overruled by President Donald Trump…

Trump freed Gallagher from pretrial confinement but Judge Capt. Aaron Rugh ordered Gallagher freed from restricted quarters after sacking the prosecutor for illegally spying on the defense via malware.

…who, over the next several months, stepped in repeatedly on Gallagher’s behalf, frustrating Navy brass unaccustomed to their commanders-in-chief meddling in disciplinary procedures.

If we’re going to discuss meddling in judicial affairs, I have questions about Green ordering Eddie’s confinement instead of a judge.

Kudos to Trump for helping Eddie survive this SJW attack, but he left this swamp operational.

Gallagher denied the charges against him and was acquitted of all charges except one — that he posed for a photo with the fighter’s corpse. When Green sought to boot Gallagher from the SEALs as a result, Trump stepped in and expunged his record.

Gallagher went on Fox and Friends days later, where he complained about Green’s efforts.

“I get a feeling of embarrassment for my community that Adm. Green is letting ego get the best of him at this point,” Gallagher told Fox and Friends host Pete Hegseth, who himself reportedly personally lobbied Trump to intervene on Gallagher’s behalf. Later that day, Nov. 24, Navy Secretary Richard Spencer resigned in the fallout from the clash between Navy leadership and Trump.

Gallagher, however, wasn’t finished with Green.

In May, Gallagher sued the current Navy secretary, Kenneth Braithwaite, and Dave Philipps, a New York Times reporter, alleging the Navy conspired with Philipps by providing private documents to him that ended up in the pages of the Times. In the complaint, Gallagher alleges Green was one of Philipps’ sources, saying the admiral “huddled with Defendant Philipps to ensure that he was provided with full access to (Gallagher’s) private information…”

The lawsuit, filed in the Southern District of California in San Diego, is ongoing.

Two-star-rated-ass kicking is now in progress! Eddie is The Man! 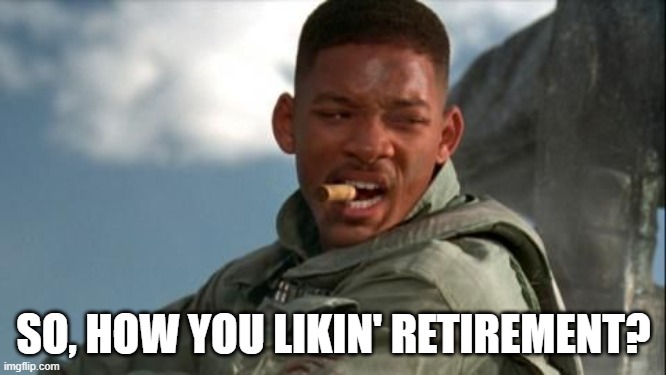 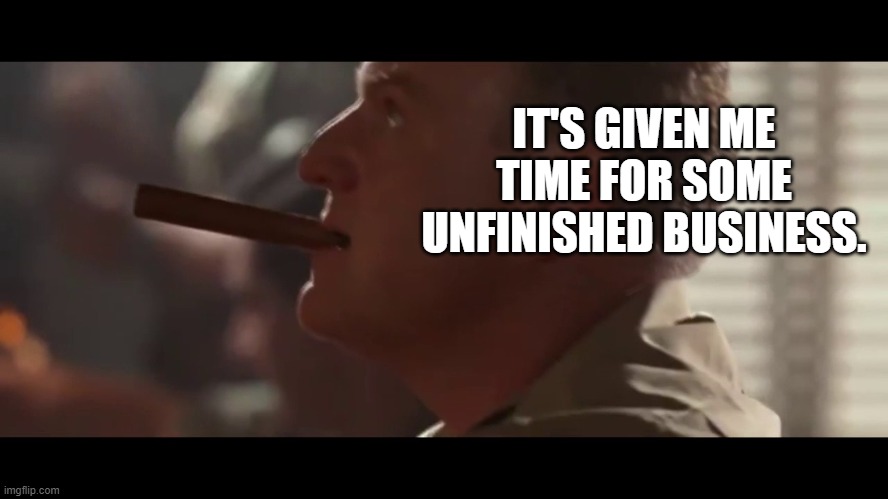 At a change of command ceremony on Sept. 11 — two years to the day after Gallagher’s arrest — Green handed the reins of the SEALs over to Rear Adm. Hugh Howard III. Howard takes over as yet another SEAL Team 7 member — Petty Officer 1st Class Adel Enayat — is set to stand trial on charges he sexually assaulted a fellow sailor during a booze-fueled 4th of July party in Iraq.

Enayat’s platoon was recalled from Iraq by Green in July 2019 after the alleged victim, a woman, reported the assault. Enayat denies wrongdoing.

Juicy enough to deserve its own post! We’ll skip for now.

After the incident Green told his subordinates “we have a problem” with good order and discipline in the ranks. A subsequent review of Special Operations Command found no cultural problem but said that aspects of the culture, such as its focus on operations, “set conditions favorable for inappropriate behavior.”

Take a guess, how long it took Adm. Green to find a cultural problem. From Eddie “The Man” Gallagher’s Instagram: 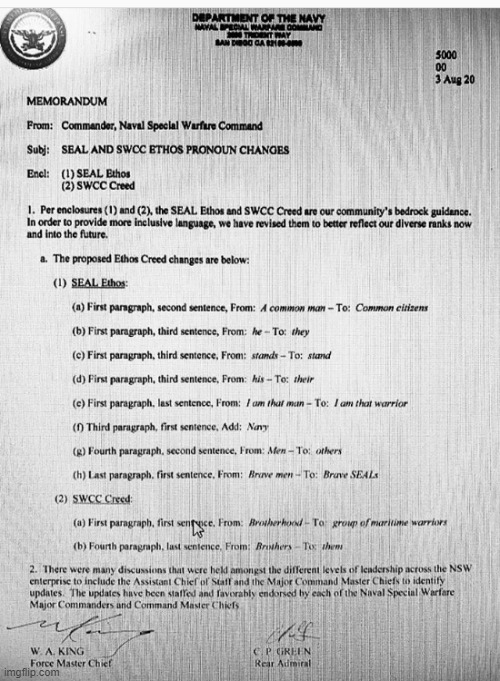 This news website linked directly to Eddie Gallagher’s social media. Methinks he still has friends on the inside. *salute*

The U.S. Navy SEALs and the Navy Special Warfare Combatant-craft Crewmen (SWCC) recently changed their ethos and creed statements to reflect a gender-neutral presentation of the elite Navy outfits, doing away with gendered terms like “brotherhood.”

I’m honestly shocked. I had expected SOCOM to be kept fighting-functional for all the shadow wars between Deep State cliques while the official, nation-defending armed forces would be permitted to wither.

“Naval Special Warfare continues to deliberately develop a culture of tactical and ethical excellence that reflects the nation we represent, and that draws upon the talents of the all-volunteer force who meet the standards of qualification as a SEAL or SWCC,” Stroup said.

And they never will so long as merit stands in the path of Prog-tard-ress. Who will take my bet, that the first female SEAL will happen on Adm. Green’s watch?

“The previous versions of the SEAL Ethos and SWCC Creed were written prior to the law allowing women to serve as operators in Naval Special Warfare. The changes do not in any way reflect lowering standards of entry…

…rather they ensure that all those who meet the requirements to train to become a SEAL or SWCC are represented in the ethos or creed they live out. This improves the posture of the NSW force by ensuring we draw from the greatest pool of talent available.

Another alteration to the first paragraph changes the phrase “I am that man” to “I am that warrior.”

To learn more about this New Normal Warrior, stay tuned for the story of Adel Enayat and the Rape Accuser Who Shall Not Be Named.