Probably nothing illustrates the moral, theological and reading-comprehension bankruptcy of Churchianity more than forgiveness. Memo to the slow class: forgiveness comes ONLY AFTER REPENTANCE! IT IS NOT FREE!

‘Christ Has Forgiven Me For So Much More’: Man Forgives Attacker After Brutal Stabbing

Forgiveness is key to the Christian faith because we have been forgiven much by God and are called to forgive others and show them the love of God.

Grace is the key to Christianity: the dual idea that 1. we cannot negotiate with God as an equal and 2. we don’t have to. Every other theistic religion is based on quid pro quo with the gods.

That is not to say, however, that our mortal behavior and decisions do not matter. If we do not hate the evil we do then we’ll never be forgiven.

Consequently, we have every entitlement to hate the evil that OTHER people do, because we have set ourselves right and they have not.

This is exactly what Philadelphia mechanic, Brett Lynn chose to do by forgiving his attacker of a brutal stabbing inflicted on him in his family-owned shop.

In keeping with Grace, this robber must have accepted that he did evil and truly deserves his punishment at the hands of the State. He plead guilty then asked forgiveness, yes?

The incident happened 7 years ago when Lynn had arrived home after dropping off his kids at gymnastics, and he saw someone trying to break into some of the cars parked in the lot of his family-owned shop located near his house. He told the man to leave, but the situation got out of control and resulted in Lynn was stabbed in the gut by the intruder and was later hospitalized in critical condition.

This passive-voice narration does not bode well for Grace. “The owner told the prowler to leave and things got out of hand and the situation resulted in Lynn being stabbed in the gut.”

He was in tremendous pain, but he thought over the matter and realized that as a Christian, he must forgive the attacker. “If I couldn’t forgive when it really mattered, then I think my witness as a Christian would be hurt,” he argued. Lynn was feeling the leading of the Holy Spirit to “resolve the conflict”…

This is a major, major problem with the modern Church: anarcho-tyranny. The people who recognize they’re naturally evil are never allowed to forget it while the conscienceless sociopath is declared equal in righteousness without even the bother of pretending sorry-ness.

…and also added that the attacker had actually attended the same high school as he did.

His attacker had graduated 10 years before him…

…held a job for 25 years, and later became homeless after the company went out of business. “My heart went out to him,” Lynn said. During the time when Lynn was called to express a victim statement in court, the judge permitted him to address the attacker personally. 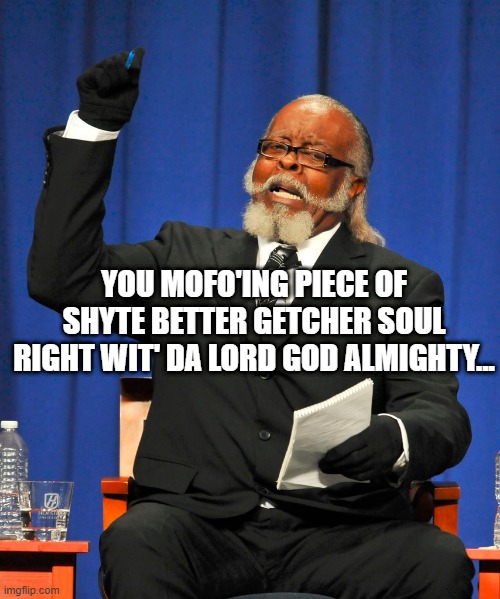 “I essentially told him, I don’t want him to be in prison any longer than the state deems necessary. It ought not be on account of me, because he doesn’t owe me anything anymore. I told the court, the reason I’m forgiving this guy is because Christ has forgiven me for so much more than he had done to me.” Lynn said.

What has Lynn done that’s worse than a robbery-fueled blood-spilling? He didn’t take the opportunity to say.

The perp’s name was withheld to protect the guilty.

Lynn ends with an important message for all of us Christians when he said, “If we’re Christians and we’ve been forgiven for everything we’ve done then how can we withhold forgiveness?”

The same way that God withholds forgiveness: if you don’t repent then you will burn in Hell.

Cheap grace is by definition, not valued.

13 thoughts on “Forgiveness Is Overrated”