At last, here’s an idea whose time has come: sentence enhancements for property crimes committed by a group! Wait, it wasn’t popular despite massive increases in organized crime? What happened?

Grocery stores are pushing California to be tougher on crime. Here’s why

That author’s name alone might be a good indicator of the problem. Go home, Hussain, because I remember 9/11. It was six days ago.

In 2003, Brian Beinlich stood before a judge in an Orange County courtroom, barely comprehending what had happened.

The judge had just told Beinlich he was sentenced to three consecutive life sentences in prison. He would not be eligible for parole for 81 years. His crime? Stealing two bottles of Hennessy from a Costco in Fountain Valley, California….

An obvious Three Strikes conviction. I guarantee, before I even check, that his prior convictions are for armed robbery and drug trafficking.

… and waving a box cutter at the security guards who chased him down.

Man, I couldn’t even guess fast enough. The poor, innocent Beinlich got three life sentences for stealing two bottles of alcohol… and felony assault with deadly weapon against uniformed security guards while resisting arrest. Cry me a river, wide and deep.

Hmm, I’ll wait to see if my drug trafficking prediction will also just happen to pop up. Maybe near the end of this article? Me so lazy.

A wave of criminal justice reforms in California in recent years sought to ease thousands of harsh sentences like the one Beinlich received, reduce the state’s bloated prison populations and create more opportunities for parole and rehabilitation. But if several large grocery store chains have their way, a measure on the ballot this fall will roll back some of these reforms, increasing penalties for shoplifting and making it harder for those convicted of certain non-violent property and drug crimes to get early parole.

Lighter sentencing and emptying the prisons have not, to put it mildly, succeeded in reducing crime as promised by our terrorist-sympathizing Marxist leaders.

While Proposition 20 was launched and financed primarily by law enforcement groups, grocery outlets served as early partners in the effort. They are taking a controversial stance at a sensitive time for corporate America, when companies of every stripe have taken pains to demonstrate support for the Black Lives Matter movement and its goals of tearing down racist systems of policing and mass incarceration.

Yep, civil war in November, folks. This ain’t gonna stop until the hangman stops it.

Albertsons and Kroger — the grocers with the biggest financial contributions to Prop. 20 — and the California Grocers Association said in statements they supported the measure because shoplifting and organized retail crime have been on the rise, amounting to significant losses, and threatening the safety of employees and customers. They say that previous reforms went too far in removing teeth from laws meant to address this type of crime.

“People are stealing, and there are no consequences,” said Richard Temple, a spokesman for the Yes on Prop. 20 campaign.

Experts said theft is a big problem for retailers, especially for grocery stores, which have high foot traffic. A 2020 survey by the National Retail Federation found that theft — which the industry calls “shrink” — was at an all-time high, costing the industry $61.7 billion in fiscal year 2019, or 1.62% of retailers’ profits. A whole niche industry around battling retail theft, through cameras, locked display cases and undercover security guards has sprung up.

Credit to Hussain, she at least did some research for this article.

The landscape of shoplifting and petty theft jurisprudence in California has shifted dramatically in recent years, largely due to Proposition 47, which voters approved in 2014. That measure raised the bar for grand theft and downgraded the classification of most shoplifting crimes to a misdemeanor. Whereas before, property theft of above $450 could be charged as a felony, now that limit is $950. Proposition 57, approved two years later, hastened the release of some nonviolent offenders from prisons.

As described by my law enforcement sources, the gangs would have one coon with a calculator (coon being a black acting white, what with him doin’ all the maths) whose job was ensuring that the amount stolen was under $950.

Thieves began working in gangs because it gets hard to carry $900 in stolen merchandise at one time. Especially if security chases you because you don’t have a hand free to wave a box cutter at them.

But after it was implemented, retailers and law enforcement officials blamed Prop. 47 for a spike in shoplifting; they said organized retail theft rings were taking advantage of reduced penalties. Safeway, Target, Rite Aid and CVS pharmacies said in 2016 that shoplifting had increased at least 15%. (Though experts say there is not sufficient evidence linking an increase in theft to the measure.) 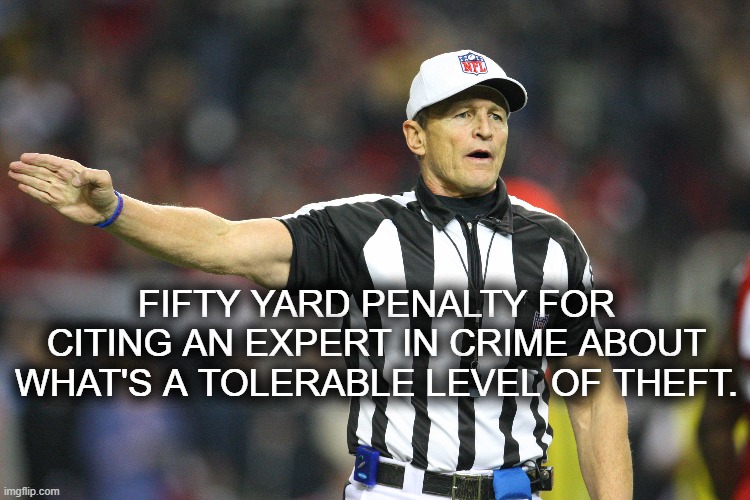 In 2018, to deter an attack on Prop. 47, legislators created “organized retail theft” as a new category of crime that would allow prosecutors to charge shoplifting as a felony if two or more people act together.

Temple, with the Yes on 20 campaign, said this rule places too high a burden on prosecutors to prove a conspiracy, and more harsh measures are needed.

Hmm… AB 1065 is the relevant bill… ah, the prosecutor is required to prove that the arrestees had previously worked together to commit theft. It’s not enough that they were working together the one time they all got arrested together. Ridiculous!

Proposition 20 would allow thefts of property worth more than $250 to be punished as felonies, which could increase the amount of time people convicted of shoplifting crimes serve. It would also create two new crimes: serial theft and organized retail theft, which could also be charged as felonies and result in time of up to three years.

Sounds good. Victims like the concept of organized retail theft so they’re pushing for a usable version of it.

Two studies — one by UC Irvine criminologist Charis Kubrin and another by the Public Policy Institute of California — found no connection between Prop. 47 and increases in violent crime. However, both noted slight increases in larceny, particularly thefts from motor vehicles.

Fire those incompetents. Seriously, there is no argument to be made that reducing criminal punishments also reduces the crime. Don’t lie to me that people actually want to go to jail.

Kubrin said she was not able to find sufficient evidence these increases were caused by Prop. 47, though there are “still some question marks” around its effect on theft that warrant further research. 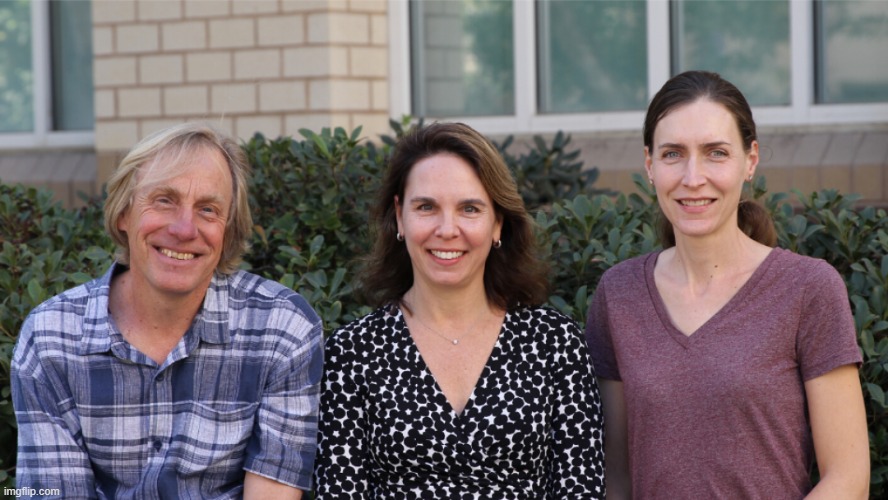 Kubrin in the middle. Those are her criminal-justice colleagues flanking her, not her inbred parents.

“We went to assess, ‘did we get a lot more crime, did we get a lot more recidivism?’ And as best we can see, that did not happen. We didn’t get those spikes in crime rates people were afraid of,” said Mia Bird, an assistant adjunct professor at the Goldman School of Public Policy who worked on the Public Policy Institute of California’s study of the effects of Prop. 47.

Yes, you causationally challenged cunt, you got less crime because you legalized crime! Lots fewer felonies now and lots fewer victims bothering to prosecute! Legalize murder and people will stop committing murder, too! It’ll just be a coincidence when half of humanity turns up dead within a week.

Shoplifting cases are currently treated as low priority in the broader criminal justice system. Big retailers send letters with boilerplate legal language asking for restitution to be paid for their losses. The cases are usually settled on the first day with a mandated rehabilitation program, probation or community service.

That’s how it should be, said Ambrosio Rodriguez, a Los Angeles-based criminal defense attorney and former prosecutor. It’s true that organized retail crime rings have emerged in recent years as California has softened its laws, he said, but sending more people to prison is not the answer. 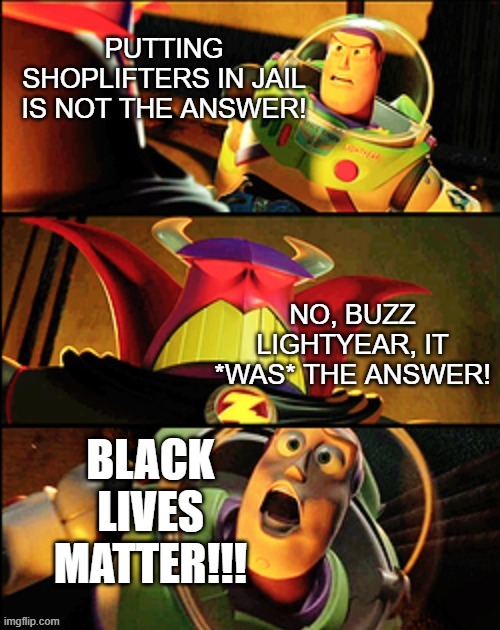 When Beinlich stole those two bottles of cognac, he had been struggling with addiction after being prescribed painkillers for surgeries he underwent. “It turned my life into a state of chaos,” he said. He had prior offenses, having served time for a series of robberies in the early 1990s. Still, he did not expect to be put in prison for life.

Close enough for me to claim victory on the drug trafficking accusation.

After 18 years in prison, Beinlich is out. A judge recalled his sentence on the recommendation of the California Department of Corrections and Rehabilitation, granting a rare reprieve.

See, this is why we need mandatory minimum sentencing guidelines: as a temporary fix until we can impose death penalties upon judges who put their fingers on the scales of justice.

Both of his parents died while he was behind bars. His sister died three months after he got out. Now he’s sober, lives in a transitory facility, volunteers at a church and takes classes at L.A. Trade Technical College. In August, he visited Redondo Beach, where he saw the ocean for the first time in decades.

Probably while getting baptized by megachurch Assemblies of God Chino Hills, which has been reporting “spiritual revival” of up to 1,000 baptisms per week at Redondo Beach lately. I suspect it’s merely a way of getting around COVID beach closures but being an insincere, money-grubbing debasement of Christianity, the mass baptisms have yet to attract the Los Angeles City government’s ire.

So, “organized retail theft” was passed by the incarceration-hating California government as a decoy. While a good idea, it was poison-pilled by requiring victims to prove entire patterns of low-level retail theft rather than the simple fact of arresting the perps all at once.

Consequently, the victims want to actually be able to use the law… and in retaliation, the government’s NGO organs have revealed themselves as allies of the looters.

3 thoughts on “Why Did ‘Organized Retail Theft’ Not Work? CA Prop 20”