You probably heard that an openly transsexual demon-worshiper has won the Republican endorsement for Sheriff in New Hampshire. You probably didn’t hear hir’s acceptance speech. 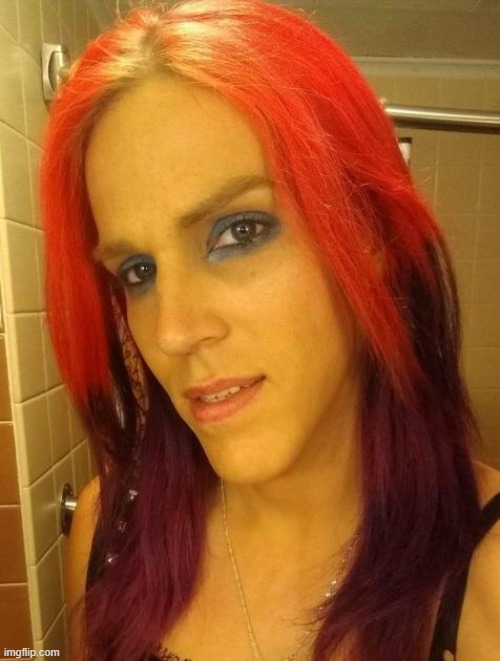 It’s hard to believe anybody of either gender would want sex with that thing. My preferred pronouns for Aria DiMezzio will be male because I guess that’s what the DNA would say.

Well… yeah… WTF, New Hampshire? I was expecting Aria to be a black woman and this post would be about white NH voters having that much race guilt stinking up their head spaces. But whatever gender Aria identifies as, that’s a whitey, baby!

How could this have happened?

In what appears to be a historic first, the Libertarian Party of Western NH has nominated Aria DiMezzo as their candidate for Cheshire County Sheriff. DiMezzo says that her research shows that she may be the first-ever transgender candidate for Sheriff in United States history.

The last-minute filing was thanks to the Libertarian Party of NH re-attaining major party ballot access on the level of the republicans and democrats for the first time in over two decades. That means that the party executive committee has the ability to appoint a slate of candidates to fill any races for which no one had yet filed or won enough write-in votes in the primary election. Parties have one week from the primary date to file such a slate.

The Free State Project was a Libertarian effort to self-relocate en masse into New Hampshire in order to create a truly Libertarian state by weight of numbers. It amounted to fewer than 5k people actually relocating, an interesting and cautionary example to the Benedict Option types in the Manosphere.

With the largest state legislature in the nation, New Hampshire offers the highest ratio of representation and easy access to politics. There are currently more than 20 Free Staters in the legislature, with more than 45 having served as Democrats, Republicans, and Libertarians. About 100 liberty-minded individuals who aren’t affiliated with the FSP serve in state government.

New Hampshire has small, easy-to-canvass voting districts, with each member of the House of Representatives representing about 3,300 people. Local, nonpartisan elections are ubiquitous. The state has a long tradition of local control through town meetings, where town citizens vote on their budgets line-by-line.

Independent voters comprise about 42% of the New Hampshire electorate, attesting to the citizens’ spirit of independence and dissatisfaction with major parties. A number of Free Staters are involved with the New Hampshire Liberty Alliance (NHLA), a non-partisan coalition working to increase personal freedom through education, political action, and charity.

It sounds like winning the Republican nomination in NH is less a statement of ideology or insider status than it is elsewhere in the Union.

It’s an interesting approach and throws a surprise libertarian challenger into a long-stale county sheriff’s race that has been a re-match for several terms between incumbent democrat Eli Rivera and longtime republican challenger Earl Nelson.

Earl Nelson ran in 2018 but not 2020. That opened the door for her to run as a Republican against Eli Rivera.

My best answer about how this came to pass is the Republican Party is so insular and Establishment that it didn’t bother to disciple any replacements. DiMezzo was the only Not-the-Democrat in town. Boomers gonna Boom.

For the consequences, we proceed to

Marilyn Huston, the chair of the Cheshire County GOP, congratulated DiMezzo for the victory and said she “did very well with the primary and that was wonderful.” However, Huston said DiMezzo never showed up to GOP meetings and events, despite being invited.

Female leadership. What a pity for Marilyn that DiMezzo has no intention of winning:

Inside Sources reports that she will not campaign against popular incumbent Democrat Eli Rivera, who is seeking a fifth term.

I checked why a self-described transsexual Satanist would be okay with Rivera for a Sheriff.

Rivera, a Democrat, endorsed Buttigieg last year and has even appeared in a campaign ad. 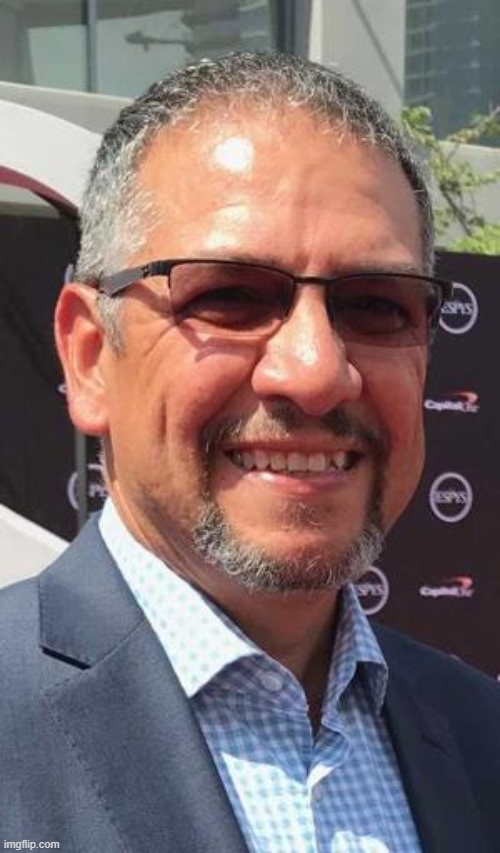 Nothing that an abortion-loving homopedo male feminist Jew will do as Sheriff is likely to upset a Satanist.

A Time of Self-Reflection

Hate mail is really coming in now, although most of it is just passive aggressive nonsense that says what it means to say without explicitly saying it. C’est la vie. I’m used to receptions that aren’t exactly warm. In fact, I’m used to quite a bit worse. Let’s face it: I do a nationally-syndicated radio show that streams to the Internet, where I have my own Youtube channel, and where I do my own gaming streams. Rarely does any stream go by without someone coming along just to talk about me being a freak. Again: c’est la vie. I’m quite happy with things.

Of course he is. You can’t call somebody a freak when they live in Freakton. I would be the freak in DiMezzo’s circle: 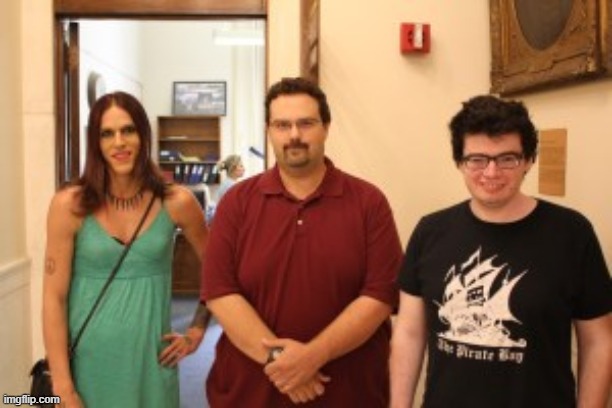 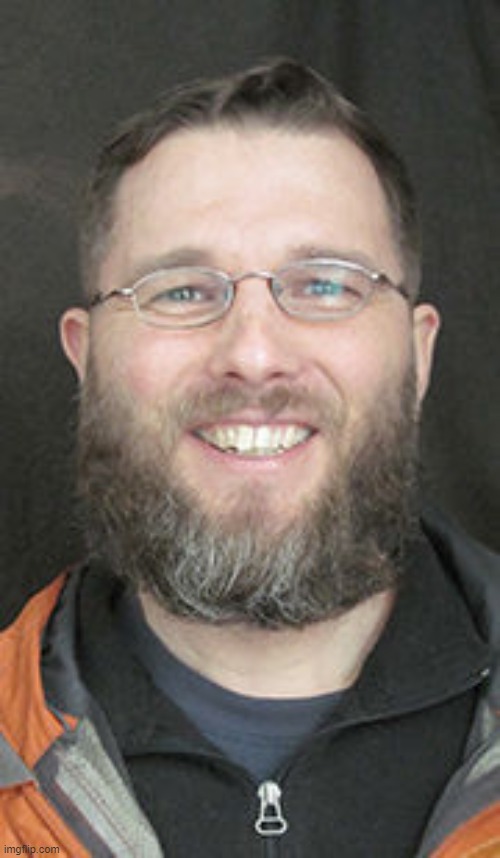 Sparky, because I knew you’d be curious.

As of late, I’ve been called a “wolf in sheepskin.” First of all, it’s worth pointing out that a libertarian anarchist who runs as a Republican isn’t a wolf in sheepskin; they’re a sheep in wolfskin. The Republicans and Democrats are the parties of hostility, aggression, taxation, military-style policing, unconstitutional mandates, states of emergencies, unending war, and murdering children around the globe. As of yet, no elected libertarian anarchist has done any of those things.

No elected libertarian anarchist has yet existed but he’s right that our leaders are not our people.

So you’re mad. I get it. I promise you: I get it. You feel betrayed. You may even be wondering how the party that you so believed in could do something like this. But, odds are, you’re blaming me. Most people are probably angry at me, and blaming me for all this. That’s silly. I was always upfront about who I am. The good man in Rindge who looked into me found out everything he needed to know with a simple Google search. There it was, plain as day:

It’s all there. None of it is a secret. I couldn’t possibly have been more upfront about who I am, or my position on things. Did none of you pay attention to the election two years ago, when I criticized Eli Rivera for not going far enough with his sanctuary policy? Did none of you remember the six foot tall tranny who ran for sheriff and then city council?

Emphasis his. Nobody cares who wins elections because of a toxic combination of stupidity, apathy and most of all, NO LONGER BEING INVOLVED IN THE ELECTION PROCESS.

I used to care who my candidates were. Here’s an experiment I did with voting randomly:

More than 4,000 people went into the voting booth on September 8 this week, and they all filled in the circle by my name despite knowing absolutely nothing about the person they were nominating to the most powerful law enforcement position in the county. That’s a level of recklessness of which any decent human being should be ashamed.

Emphases his again. Why is this Satanist making sense?

False guilt. The fault is Marilyn Huston’s for accepting DiMezzo as a Republican candidate despite his being a walking abomination to everything the Republican Party pretends to care about.

I’m running for sheriff because I oppose that very system, and the sheriff has the most hands-on ability in Cheshire County to oppose that system. The system that let you down by allowing me–the freaking transsexual Satanist anarchist–be your sheriff candidate is the same system I’m attacking. I’m sorry, and I know it hurts to hear, but that system is a lie. The entire thing is a lie. It’s broken from beginning to end, and my existence as your sheriff candidate is merely how this reality was thrown into your face.

I cannot say he’s wrong… especially about his being part of the problem.

I hope that I’ve convinced you that your anger is misplaced if you are angry at me. I didn’t do this. I didn’t ask you to trust me.

He solicited votes knowing he was untrustworthy.

I didn’t ask you to “vote blue no matter who” or whatever equivalent slogan Republicans use. The system did. You should be angry. You should be practically foaming-at-the-mouth in rage, livid at what has happened.

I already am, DiMezzo, but when Normie Americans reach where I am today then it’ll be a dark time for you Satanists. Maybe instead of mocking us you could help? Other than letting your Jewish handler win? Because Jewish subversion is a major, MAJOR part of how American Government went evil in the first place.

First DiMezzo rails against the system being broken, then she refuses in advance to run against (((those most responsible))).

The state failed you. Not me. The party, the Republicans, the State of New Hampshire, the United States. The entire apparatus that you believe in. That failed you. I was honest. They weren’t.

“Knowledge is the greatest gift”, eh? No. Christ’s Grace is the greatest gift. Knowledge only made us aware of our need for it and Him. Yes, our society is totally corrupt. No, there is no mortal solution; everything we build from the ashes will be corrupted once again. But Christ has given us this: you scum ain’t gonna have the final word.

Keep your knowledge, Aria. I have faith.

If you agree, know this: the first step to fixing this mess, where we have a system where more than 90% of “highly-connected” and “politically-aware” primary voters don’t actually have any idea who they are voting for, is to secede from the United States. Limit the damage that other ignorant people can do to you.

I’ve heard similar thoughts in the Manosphere. The common thread to all of it is “other people are the enemy”. That’s not going to work in either the short term or the long term. Organization is how the problem will be solved, not in further atomization which was the devil’s plan from the beginning.

Imagine a person in California, Mississipp, Colorado, Washington, or Oregon voting for who is going to decide what you can and can’t do, when they don’t know the very first thing about that person. Imagine the millions upon millions of votes being cast each year in abject, complete, and total ignorance of the people who are being voted for. I don’t know how you can see me become the Republican nominee for sheriff and not become an anarchist, to be honest. Look how clueless the average voter is!

Sweet Satan, how can you not be an anarchist?! Between 75 and 80% of the primary voters–the ones alleged to be more politically aware than the average voter–were completely and totally ignorant of who they were voting for! What is the percentage with the average voter? 90%? 95%? These people are deciding who gets to rule you.

Nope. If we were a democracy then Orlando Bloom or his A-list celebrity equivalent would be our President. Instead, we’re being offered “Creepy Joe” Biden.

The game’s up, DiMezzo. You should have stayed at “the system is broken” which it truly is. But no, you had to go one further and invite us to join you in smashing the system.

There is an authority beyond all human ones. I find myself freed from the laws of men because they destroyed their own legitimacy but that does not make me an anarchist. I remain constrained by the law of God, by His morality and conscience, and in those restrictions I find a comfort, nobility and DECENCY that you, DiMezzo, in your shock-jock transsexual brick-throwing will never know.

The law was not made for the lawful, but the lawbreakers. Man’s law may fail but you, Dimezzo are still a lawbreaker. You know that there are only two genders yet have chosen to live as a rebel against that knowledge… and you now call for others to join you in your eternal rebellion.

How about instead of secession, we start some criminal justice…Sheriff?

5 thoughts on “The Satanist Sheriff”