With all my postings on current events, true crime and false priests, one might wonder why I’ve never once mentioned QAnon. It’s because I can’t tell why the guy is talking about. I’ve seen more legible word salad coming from Jordan B. Peterson. As a rule, if somebody makes a point of not speaking clearly then I don’t believe they’re honest.

Which today, puts me in company with the Left. Awkward.

Back in October of 2017, an anonymous person calling themselves the “Q Clearance Patriot” (“Q” for short) started dropping vague messages on 4Chan purporting to detail President Donald Trump’s coming war on the “evil tyrants” who control America. These messages — called “breadcrumbs” or “Q Drops” by adherents — appear garbled and even incoherent to most of us, but a growing community has used alleged clues to piece together a narrative. That narrative involves a cabal of Hollywood actors, wealthy elites and well-known Democratic personalities like the Clintons and the Obamas, all of whom have conspired to exert control over America for their own sinister ends.

This is the essence of QAnon, which has become a big tent for a family of conspiracy theories involving secret child trafficking rings hidden right under our noses…

The child abusers teach sodomy to schoolchildren under State protection. That is also not a conspiracy theory anymore; it’s government policy.

Dude, every property owner in America is anti-BLM.

Holding it all together is the idea that Trump is working behind the scenes to engineer “The Storm” — a code name for the mission to dismantle this group of “Deep State” operatives and restore peace and order to America.

Joe Carter has done an excellent job explaining QAnon for the Gospel Coalition.

He calls QAnon Satanic because hysteria over Satanic Ritual Abuse in the 80s petered out with little to show… besides George Soros being a victim of it, and Soros doesn’t like people remembering his early days as a literal, swastika-wearing, let’s-gas-the-Juden German National Socialist.

The appeal of QAnon isn’t hard to figure out. America has been, as they say, “going through it” lately. QAnon provides explanations — however farfetched — for the seemingly inexplicable. It simplifies the maze of life into a relatively simple narrative. As America grows less religious, conspiracy theories like QAnon can provide a religious sense of peace and meaning — assuring followers that everything is under control. QAnon is a sort of faith movement — one that has found a lot of traction with evangelical groups. In fact, a pastor of a megachurch used his sermon time to show a QAnon video just a few weeks ago.

There are a few possible reasons.

The appeal of QAnon is twofold. One, people know they’re being lied to and want to figure out exactly what and who the lies are covering up, preferably while there’s still a chance to do something with the truth. Welcome to my blog. And two, people want to believe that a Jesus figure will come along to save them. The real Jesus is not popular for this purpose, often teaching His followers patient endurance over Mohammedan murder sprees, so wouldn’t it be nice if President Trump saved us from evil?

Hence the heartburn over QAnon these days. Trump is up for reelection and *anything* that brings him support must be countered!

First, QAnon a logical extension of the culture war, providing real plot and vocabulary to the “us vs. them” model that became popular with the rise of the Moral Majority. QAnon codifies the mistrust of science, “big government” and celebrity into a real (if slippery) system.

A conclusion I reached in my previous post, that the Moral Majority was a reduction of Christianity’s political potential into controlled opposition.

But QAnon has nothing to do with the way our Marxists misuse science and government.

Secondly, as evangelicalism becomes more of a secularized collective, QAnon rejuvenates it with new religious energy, providing a shared sense of secret knowledge to bring communities together and an assurance that everything is going to work out alright in the end. In a way, QAnon provides a political spin on end-times theology; a peek at the end of the book to provide confidence that the bad things happening now won’t last forever.

Finally, QAnon isn’t necessarily as crazy as it sounds. 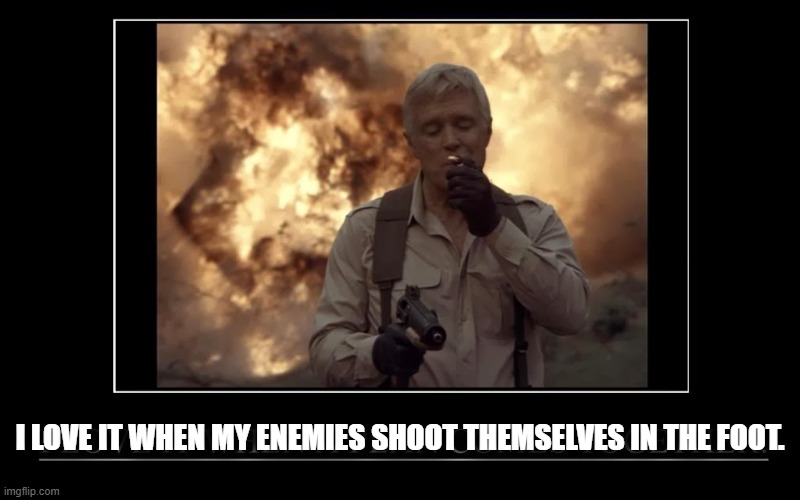 It’s undoubtedly true that powerful, immoral people do have an alarming amount of control and they do get away a lot of bad things. Look at the story of Jeffrey Epstein and Ghislaine Maxwell, who had connections to powerful politicians on both sides of the aisle. Look at Roger Stone. Look at the Sackler family, owners of Purdue Pharma, who deliberately downplayed concerns about Oxycontin as the opioid crisis surged.

Unfortunately, these horrible stories more banal and out in the open than QAnon adherents want them to be. They aren’t mysteries. You can read about them in pretty much any newspaper in America. But the headlines provide enough confirmation bias to keep Q followers glued.

Confirmation bias is my take on QAnon’s popularity.

There are no easy answers about what can be done about QAnon.

You could ignore him, like I do. If Q’s right them Trump will defeat you regardless and if he’s wrong then everything you do in response to him is wasted effort.

The lack of a shared epistemology means that debates are often doomed to frustration, as what one side considers a trusted news source may be considered a propaganda machine by the other.

Man, this author is too short for the lollipop ride.

But the fact that Christians seem extra open to conspiracies does reveal that something is deeply broken in how people of faith are spreading their worldview. When Christianity is set up as a cultural battle instead of an opportunity to serve, others are seen not as people in need of love but enemies who need to be feared and mistrusted.

In other news, Christians are not permitted to sing as a temporary health measure. You are not being persecuted. You are merely being silenced for the good of humanity. Stop trying to look behind the curtain!

3 thoughts on “The QAnon Phenomenon”