Let me set the record straight on LA Mayor Garcetti’s notorious threat to shut off utilities to dissidents: it’s a hollow threat that relies upon the cooperation of his enemies. 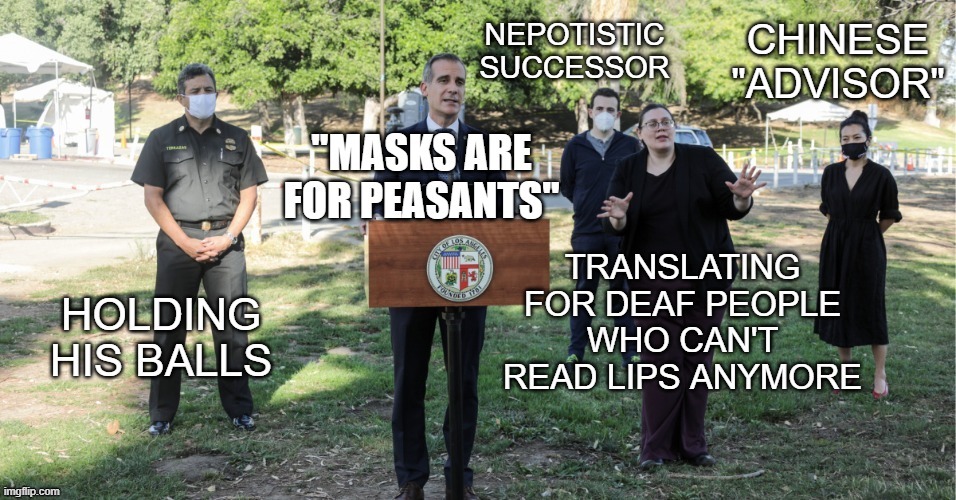 Los Angeles Mayor Eric Garcetti on Wednesday said he is authorizing the department of water and power to shut off utilities at houses, businesses and “large gatherings” within 48 hours that are violating health orders related to COVID-19.

Although churches weren’t specifically mentioned, the term “large gatherings” has been used by the city to include houses of worship.

And NOT to include “mostly peaceful protests”.

Garcetti’s order came the same week that pastor John MacArthur of Grace Community Church in Los Angeles conducted several interviews and said his congregation would not obey a statewide order to stop meeting.

“Tonight I‘m authorizing the city to shut off Los Angeles Department of Water and Power service in the egregious cases in which houses, businesses and other venues are hosting unpermitted large gatherings,” Garcetti said at a Wednesday news conference. “Starting on Friday night, if LAPD responds and verifies that a large gathering is occurring at a property, and we see these properties reoffending time and time again, they will provide notice and initiate the process to request that DWP shut off service within the next 48 hours.”

The order, Garcetti said, focuses “on the people determined to break the rules, posing significant public dangers and a threat to all of us.”

Focus instead on “I’m authorizing the city” and “[LAPD] will provide notice and initiate the process to request that DWP shut off service”. That is curiously passive-aggressive language for a Christ-hating mayor with a license to Cancel. Why doesn’t he just say he’ll do it?

Because he can’t do it.

California deregulation laws make LA DWP a completely separate entity from the LA City government. I’ve lost touch with my old crowd so perhaps GarcettiCorp got its plants and moles into the leadership but given the long history of animosity… specifically, City bureaucrats lusting after DWP revenue… it’s not very likely.

My read on the threat is that Garcetti is making a power play against DWP leadership. If he orders them to punish “quarantine breakers” and they refuse then he’ll have a political casus belli.

By contrast, if Garcetti said he’d do it and DWP refused to cooperate, then he’d look bad just in time for the election.

Which brings up another valid point. Every Californian should always be ready for sudden utility shut-offs because this is earthquake country.

Attorney and Liberty Counsel founder Mat Staver on Friday said Christians in California “now have a choice – serve the Lord or have their basic utilities cut off.”

Romans 11:4 “And what was God’s answer to him? “I have reserved for myself seven thousand who have not bowed the knee to Baal.”

Referencing restrictions in Los Angeles and elsewhere, Staver added, “I have never seen such outrageous attacks on religious liberty.”

He hasn’t read history. This is pretty tame for Christian persecution. What IS outrageous is pastors uniformly cooperating in fear of the devil’s DISAPPROVAL.

Man up, clergy. They ain’t got nothing on you.

8 thoughts on “Garcetti’s Got Nothing”