So, a man walks into a church and nearly 100 people instantly die of Chinavirus. Or something like that.

Yahoo is a media whore but Business Insider limits article viewing. Getting around that is what media whores are for!

He must have been a kisser. 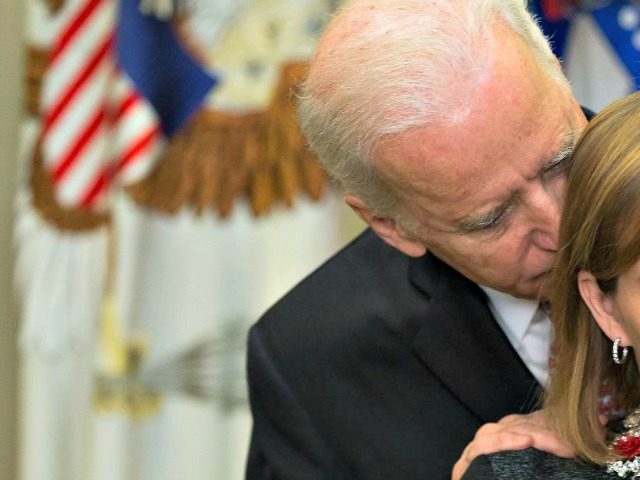 Wait, which is it? Did they get sick as in symptomatic or did they merely test positive one time?

Wait, that’s not the same thing. Did he intentionally infect 91 people at church or did he accidentally infect a few people who over time, infected others? Answer: 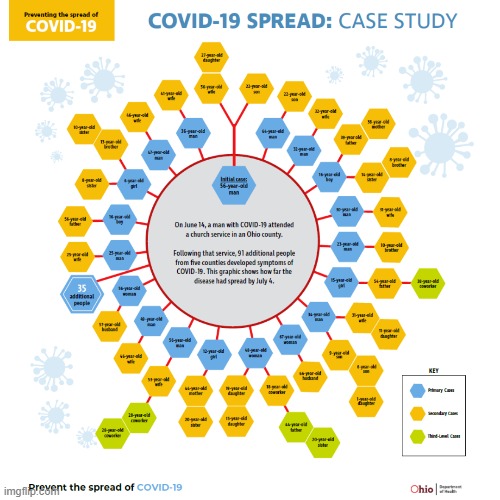 Yeah, right. For me to believe this is anything but a false-flag hatchet job, I need the names of the church and the man who apparently showed up projectile-vomiting little spiky balls across the auditorium.

A single person attending church with COVID-19 led to an outbreak of nearly 100 cases, showing the risk of group gatherings during the pandemic, Ohio officials say.

The 56-year-old man attended a church service on June 14 while infected with coronavirus, Gov. Mike DeWine says. By the Fourth of July, at least 91 people ranging in age from a 1-year-old girl to a 67-year-old woman had the virus.

No identification or other sources provided, excepting DeWine’s Twitter feed which also doesn’t name any names. Oh wait, it does name ONE and guess whose?

Was this a passive-aggressive assassination attempt? Regardless, no evidence was presented that this church even exists, let alone was the “superspreader” that Business Insider claims it was.

“It is vital that to control the spread of the virus that any time people gather together, including for religious services, that everyone wear masks, practice social distancing, wash hands, and also while indoors, making sure there is good ventilation and airflow,” he said, according to The Kansas City Star.

It is not clear whether anyone at the church service wore masks or practiced social distancing. Ohio’s mandatory face-mask only came into effect on July 23.

NOT ACCEPTABLE. They know he infected exactly 91 people but don’t know if he ever went within six feet of them? They were able to rule out all other possible sources of infection for those 91 people spread across four counties?

But religious services have been identified as situations where the coronavirus can spread like wildfire.

Fortunately for atheists, BLM protests are not religious services. While it’s true that such gatherings also have a lot of yelling and chanting, it’s not SINGING which is somehow totally different. Also, the protests are all outdoors, excepting the indoor protests, and COVID-19 can’t spread outdoors. That’s why you can still attend a ball game without wearing a mask. 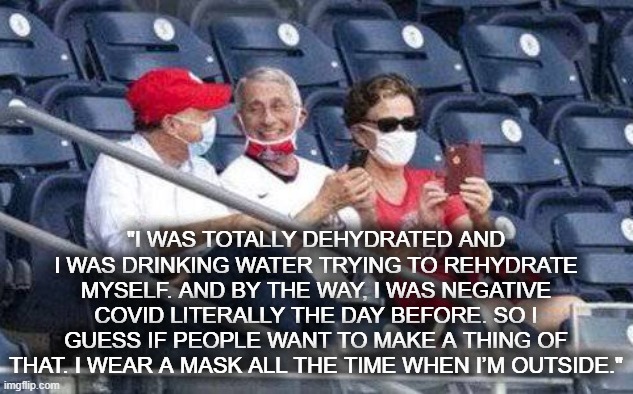 Experts have warned that loud talking and singing could spread the coronavirus further than six feet. When people give exhalations that require more energy, the droplets they emit can travel further. Some research has also suggested that louder speech produces more droplets.

“It’s an ideal setting for transmission,” Carlos del Rio, an infectious-disease expert at Emory University, told The New York Times, referring to church services. “You have a lot of people in a closed space. And they’re speaking loudly, they’re singing. All those things are exactly what you don’t want.”

Another globalist, vaccinator and AIDS activist. The Chinavirus “response” is headed by a very small group of people and I don’t just mean epidemiologists.

Dr. del Rio is a native of Mexico where he attended medical school at Universidad La Salle, graduating in 1983.

A number of churches have caught headlines after large chunks of their parishioners caught the coronavirus.

In March, 35 people at a church in Arkansas caught COVID-19 after attending a service. Three of them later died of the virus.

Among 92 attendees at a rural Arkansas church during March 6–11, 35 (38%) developed laboratory-confirmed COVID-19, and three persons died.

On March 16, 2020, the day that national social distancing guidelines were released…

…The Arkansas Department of Health (ADH) was notified of two cases of coronavirus disease 2019 (COVID-19) from a rural county of approximately 25,000 persons; these cases were the first identified in this county. The two cases occurred in a husband and wife; the husband is the pastor at a local church (church A). The couple (the index cases) attended church-related events during March 6–8, and developed nonspecific respiratory symptoms and fever on March 10 (wife) and 11 (husband). Before his symptoms had developed, the husband attended a Bible study group on March 11. Including the index cases, 35 confirmed COVID-19 cases occurred among 92 (38%) persons who attended events held at church A during March 6–11; three patients died.

Okay, Wu Flu cropped up in a rural community… but the implication that a church service was driving the disease’s spread is an obviously inadequate explanation.

On March 10 and 11, the wife of the church pastor, aged 56 years, and the pastor, aged 57 years, developed fever and cough. On March 12, the pastor, after becoming aware of similar nonspecific respiratory symptoms among members of their congregation, closed church A indefinitely. Because of fever, cough, and increasing shortness of breath, the couple sought testing for SARS-CoV-2 on March 13; both were notified of positive results…

The same day, ADH staff members began an investigation to identify how the couple had been exposed and to trace persons with whom they had been in contact. Based on their activities and onset dates, they likely were infected at church A events during March 6–8 and the husband might have then exposed others while presymptomatic during a Bible study event held on March 11.

Contact tracing will never prove anything. It’s ridiculous to think that even perfect knowledge of a person’s movements is sufficient to track a virus spread, because the person is not the virus.

To facilitate the investigation, the pastor and his wife generated a list of 94 church members and guests who had registered for, or who, based on the couple’s recollection, might have attended these events.

So that’s where the number came from. “I think these people might have attended that day.” Color me skeptical that he had all 94 names in his head and didn’t just fax the church directory.

In May, 107 people tested positive for coronavirus after attending a church service in Frankfurt, Germany.

In June, 236 people in Oregon got the coronavirus after a church held multiple services during lockdown.

Union County in eastern Oregon is now battling the single largest outbreak of COVID-19 yet in Oregon, according to state public health officials.

The outbreak has spread among the congregation of the Lighthouse Pentecostal Church in Island City, just east of La Grande. Of 365 church members tested, 236 returned positive for COVID-19, according to Dr. Tom Jeanne, deputy state epidemiologist.

Jeanne suggested that the timeline of the outbreak — with so many people testing positive simultaneously — indicated that the primary transmission likely occurred between church members and not as part of broader community spread.

“It could have been one service or one event that was responsible for the majority of transmissions,” Jeanne said. “It’s a little early to tell.”

He doesn’t know but speculates that “attending one church service” spread the virus from 1 to 236. That is not how viruses spread. Being a single event would mean that one or two people sneezed or sweated on nearly 400 people. I know Pentecostals lay hands on each other but not like that.

Local public health officials have offered a somewhat different explanation, downplaying the role of the church in the transmission of cases. …

[Mayor] Clements said he’s concerned about whether there’s a plan to get food and financial aid to families that need to quarantine to keep the virus from spreading. Complicating that effort, he said Union County has relatively few social service organizations and nonprofits, so churches often fill that role.

So, either one person walked into a church and infected 365 people within the hour by singing praises to Christ, or the church had stepped up to help their community and acquired COVID from many acts of charity work. Hmm.

So stunning and brave! What a leader!

During the early months of the pandemic, a secretive doomsday church in South Korea was accused of accelerating the outbreak in the city of Daegu. The city is now suing the church for endangering lives.

Don’t tell me that the Capitol Hill Autonomous Zone was not a superspreading hot spot.

What a disease. The only ways to avoid getting C-virus are throwing bricks at cops, giving money to AIDS activists, walking counter-clockwise in the grocery store… and intentionally neglecting Christ Jesus, our Savior.

4 thoughts on “Business Insider’s Hit Piece On the Church”