Social media has become infamous for doing the publisher/platform dance, pretending to be both at the same time so they can refuse to be responsible for any statement they approve. Called upon the filthy carpet of Congress, the 1619 Project’s Hannah Nicole-Smith now attempts a new variant: the history/journalism dance. 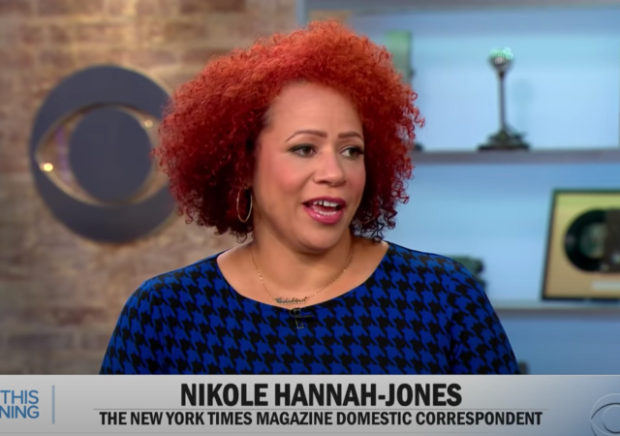 WHAT THE SPORKING HILL AM I LOOKING AT?!? A Pulitzer Prize winner…

That face definitely puts her Yo Mama slur in perspective.

Lesson Plan: Exploring “The Idea of America” by Nikole Hannah-Jones

Lesson Overview:
“The truth is that as much democracy as this nation has today, it has been born on the backs of black resistance…Black people have seen the worst of America, yet, somehow, we still believe in its best.” —Nikole Hannah-Jones

The 1619 Project, inaugurated with a special issue of The New York Times Magazine, challenges us to reframe U.S. history by marking the year when the first enslaved Africans arrived on Virginia soil as its foundational date.

Award-winning investigative journalist Nikole Hannah-Jones provides an expansive essay on why “black Americans, as much as those men cast in alabaster in the nation’s capital, are this nation’s true ‘founding fathers.’”

That BITCH is UNWORTHY. She should have read about more signers of the Declaration than Jefferson.

Carter Braxton used his fortune to fund the colonial army then died in poverty. Legend says that at the time he died, the sheriff was pounding on the front door to collect on those debts.

“Two of [Abraham Clark]’s sons were officers in the Continental Army. He refused to speak of them in Congress, even when they both were captured, tortured, and beaten. However, there was one instance when Clark did bring them up and that was when one of his sons was put on the prison ship, Jersey, notorious for its brutality. Captain Clark was thrown in a dungeon and given no food except that which was shoved through a keyhole. Congress was appalled and made a case to the British and his conditions were improved. The British offered Abraham Clark the lives of his sons if he would only recant his signing and support of the Declaration of Independence; he refused.” -Wikipedia

What did Tyrone do to become a Founding Father? Lose to a Hutu?

Her essay chronicles a history of policies enacted to profit from and disenfranchise black Americans, and the fight not only to claim black liberation, but also to make liberation possible for all Americans.

This lesson plan is designed to introduce Hannah-Jones’ essay, and The 1619 Project as a whole, through discussion questions and guided reading. For extension activities and to delve into the other essays and creative works that compose this special issue, please visit:

That tells us whose arse the Pulitzer people are kissing these days.

Warm-up:
The signing of the Declaration of Independence in 1776 is often presented as the foundational event of U.S. history.

It’s not a coincidence that I chose two Signers for my examples above.

Referring to the text of the Declaration of Independence, answer the following questions as a class:

What are the values stated in the Declaration of Independence?

Let’s see… we have now high taxes, a Nanny state and unelected tyrants who fondle themselves while yanking on our chains. For our welfare, of course.

How has the interpretation of those values changed over time? Who is responsible for creating those changes?

Introductory Reading and Discussion:
1. Read this excerpt from Nikole Hannah-Jones’ essay to identify her central thesis.

2. As a class, identify Hannah-Jones’ central thesis. Then, discuss the reading using one or both of the following sets of questions.

There’s a link but I’ve got a more honest and entertaining essay waiting for you at the end.

What is national memory? How do we create it? How can we change it?

By lying about history, if you ask the New York Times.

What examples of hypocrisy in the founding of the U.S. does Hannah-Jones supply? What evidence can you see for how “some might argue that this nation was founded not as a democracy but as a slavocracy”? …

“The Idea of America” is bookended by personal stories; it begins with Hannah-Jones’ memory of her father’s attachment to the American flag, and ends with a story about a middle school class assignment. Why do you think the author includes personal anecdotes in her essay? Why do you think she writes in first-person throughout?

Because she’s a blacktivist deceiver with a racist agenda, and not an actual scholar. This is the junk getting taught to America’s children as facts.

But all is not well in Pulitzer Land.

Senator Tom Cotton (R., Ark.) introduced a law on Thursday that would prohibit federal funding for schools that incorporate curriculum from the New York Times‘s “1619 Project.”

The 1619 Project, named after the year when colonists first brought slaves to the U.S., attempts to retell American history by emphasizing the importance of slavery in the country’s earliest years. However, historians have criticized the project for basic “factual errors” and a ” displacement of historical understanding by ideology.” (One example of such an error in the project is the assertion that the colonies revolted from British rule in order to preserve slavery.)

“The New York Times’s 1619 Project is a racially divisive, revisionist account of history that denies the noble principles of freedom and equality on which our nation was founded,” Cotton said in a statement. “Not a single cent of federal funding should go to indoctrinate young Americans with this left-wing garbage.”

Go get ’em, King Cotton! Sorry, couldn’t resist, but seriously, Tom is doing a good deed by introducing this legislation. I hope it passes. Even if it doesn’t, it managed to force Oprah candidate Nikole Hyphen-Negro onto the other foot, or should I say, the other half of her dance.

The “I’m just a journalist” dance.

I often break links because so many of them auto-fill-in their own formatting, which can throw my normal formatting off in unpredictable ways when I draw from so many sources. This one I left intact so you can easily read the tweets for yourself. There is not a dull one in the batch.

Sen. Tom Cotton (R-AK) thrust the New York Times‘ 1619 Project back into the spotlight when he threatened to defund schools that use it in the curriculum.

The discussion led creator Hannah Jones to admit the 1619 Project is not history, but a “work of journalism.”

[Quoting from NHJ’s twitter on the linked website:] “I’ve always said that the 1619 Project is not a history. It is a work of journalism that explicitly seeks to challenge the national narrative and, therefore, the national memory. The project has always been as much about the present as it is the past.

The term for that is PROPAGANDA. Which, also, should not be taxpayer-funded.

“The crazy thing is, the 1619 Project is using history and reporting to make an argument. It never pretended to be a history. We explicitly state our aims and produced a series of essays. Critique was always expected, but the need to discredit it speaks to something else.

Which is it, Nicull or however your name is misspelled? Is it history, is it journalism or is it Mein Kampf for Melanin?

“The fight here is about who gets to control the national narrative, and therefore, the nation’s shared memory of itself. One group has monopolized this for too long in order to create this myth of exceptionalism. If their version is true, what do they have to fear of 1619?”

Whoa. Truly, Senator Cotton, you have managed a rare achievement: you shucked the skinsuit off a Child of the Lie like an oyster from its shell… specifically, by steaming it!

Jones also said they “explicitly stated” their aims in the piece. The last sentence of the introduction (my emphasis): “On the 400th anniversary of this fateful moment, it is finally time to tell our story truthfully.”

Truthfully. When I read “truthfully” I expect facts and history.

Even if Jones wanted the 1619 Project to be a “work in journalism” she chose the wrong term. Journalism, like history, should report the truth. Not your truth. Not alternative facts.

Distorted Curriculum
Jones tweeted that her project “was never intended to supplant US history curriculum.” She had to add that it “is pretty terrible but none of these folks seem concerned about that.”

If she never “intended to supplant” the curriculum then we need her to explain why the website says the project “challenges us to reframe U.S. history by marking the year when the first enslaved Africans arrived on Virginia soil as our nation’s foundational date.”

That’s the curriculum, and Pulitzer, that I opened with. Nikole Hannah-Jones is projecting like an Oculus when she sees White Man as an intolerant, racist, hopelessly violent monster that can’t wait to continue a centuries-old tradition of tribal warfare.

And because ->I<- believe in facts, unlike a certain black woman with orange hair and hoop earrings, let me support what I just claimed with this letter to the editor of Notre Dame’s the Observer that ran in 1995:

It never ceases to amaze that I do more research for my quiet blog than most professional journalists do for their careers.