Continuing the running joke of AI vehicle drivers is the inevitable story of a drunk using AI to avoid a DUI. He manages a twofer!

Police are probing possible drunk-driving in the case of a Tesla driver in Arizona who said he was using the Bay Area electric car maker’s controversial “Autopilot” system when his sedan smashed into an unoccupied police vehicle, which then hit an ambulance.

The crash occurred Tuesday on an Arizona highway, according to the state’s Department of Public Safety. “We can confirm the driver indicated to troopers the Tesla was on autopilot at the time of the collision,” the department tweeted, adding that the 23-year-old male driver was being investigated for driving under the influence. 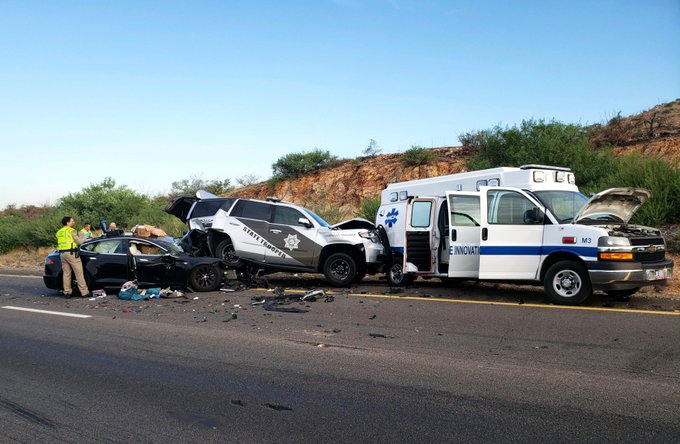 At first, I thought this was an open-and-shut “ooh, pretty lights!” kind of crash where an intoxicated driver sees the flashers and instinctively moves towards the light at the end of his tunnel vision. But it’s possible the SUV was over the yellow line enough to confuse an autopilot.

The police sergeant who had driven the department’s SUV was not in it at the time of the crash, and the ambulance occupants were not hurt, the department said. The Tesla driver was hospitalized with serious but not life-threatening injuries, police said.

Tesla did not immediately respond to a request for comment. After a fatal 2018 accident involving a Tesla on Autopilot in Mountain View, the Palo Alto company said that “Autopilot can be safely used on divided and undivided roads as long as the driver remains attentive and ready to take control,” the National Transportation Safety Board noted in a report. In a 2018 blog post, Tesla claimed Autopilot makes crashes “much less likely to occur,” arguing that “No one knows about the accidents that didn’t happen, only the ones that did.”

The boldfaced is such an obvious design failure that you know this tech is being pushed by the Elites wanting to cull the human population. Which is better: a human driver, or an expensive computer driver that the human must hover over at all times to retake control in an instant? Exactly what labor is being saved by this labor-saving device? It’s like letting your six-year old sit in your lap while you drive on the freeway except without the happy memories of Baby’s First Ticket.

Since the invention of the assembly line, manufacturing has continued to improve its capacity for production. Robots and automation have slowly been pushing the human worker out of the factory.

But, there must be a tipping point where machinery can no longer replace the human worker.

It seems that Elon Musk may be reaching that tipping point… Elon Musk’s Tesla factories have fallen victim to over-automation.

According to Timothy B. Lee, as reported on arstechnica.com, there are experts who draw parallels between Musk’s desire for a faster line to, “GM’s automation efforts in the 1980’s. At the time, GM was being led by chairman and CEO Roger Smith and faced rising competition from Toyota and other foreign car makers. Smith had a vision for a ‘lights out’ car factory where robots would do the bulk of the work, allowing GM to produce cars more efficiently than anyone else.”

What happened in that GM plant was the first evidence a fully automated line was not a good idea:

“As the assembly line tried to gain speed, the computer-guided dolly wandered off course. The spray-painting robots began spraying each other instead of the cars, causing GM to truck the cars across town to a fifty-seven-year-old Cadillac plant for repainting. When a massive computer-controlled ‘robogate’ welding machine smashed a car body, or a welding machine stopped dead, the entire line would stop. Workers could do nothing but stand around and wait while managers called in the robot contractor’s technicians.”

GM spent billions of dollars on robotics in the 1980’s, but there was never a return on that investment. While today’s robots are more sophisticated, it is clear adding robots and AI must be done incrementally to achieve the best results.

In early 2018, Elon Musk, CEO of Tesla, confirmed automation had been slowing Tesla’s Model 3 production. Musk admitted humans, not machines, were the solution.

Tesla’s CEO said one reason Tesla has failed to reach promised production volumes was due to “excessive automation”. When asked whether robots had slowed down production, Musk replied, “Yes, they did … We had this crazy, complex network of conveyor belts … And it was not working, so we got rid of that whole thing.”

The production under performance has delayed customer deliveries. Musk had to take direct control of the production line in April, even pulling all-nighters and napping at the factory.

Simultaneously, Tesla is facing negative publicity due to a fatal crash of one of its Model X SUV’s that was using the firm’s Autopilot mode. The crash is just one of the problems facing the company.

Tesla is manufacturing an unexpectedly high ratio of flawed vehicles and parts, according to several employees, leading to so much rework and repair that its factory in Fremont, California, cannot handle all the issues.

As an industrial designer I knew once put it, “humans are simultaneously the weakest and the most adaptive link in any system”. We can’t do any one thing as well as a task-specific machine but without us, complexity and chaos will rip the system apart.

So, if the driver is paying attention… but he’s plastered drunk… who gets the DUI? BigCorp or Bubba?

Crashes involving Tesla’s Autopilot driver-assistance system have sparked multiple investigations by the federal safety board. The agency found a Tesla driver’s over-reliance on the automated system was a factor in a 2016 fatal Model S crash in Florida, and determined that in 2018 in Mountain View, Autopilot steered a Tesla Model X SUV into a Highway 101 barrier, a collision that caused the driver’s death.

After another fatal Florida crash, between a Model 3 sedan and a truck in March 2019, the agency blamed the driver’s over-reliance on automation and Tesla’s design of the Autopilot system as well as “the company’s failure to limit the use of the system to the conditions for which it was designed,” it said in a report.

The report noted that after the 2016 Florida crash, which involved a collision between a Tesla and a truck, the agency recommended that Tesla and five other car makers using automated systems develop technology to “more effectively sense the driver’s level of engagement and alert the driver when engagement is lacking.”

Great. So instead of you driving your car, your car nags you to pay constant attention to her. New for 2022, the Ford Honeymoon!

One thought on “Does This Count As Drunk Driving?”