The first to go is the famous statue of Robert E. Lee on Monument Avenue.

Virginia Gov. Ralph Northam announced Thursday the removal of one of the country’s most iconic monuments to the Confederacy — a statue of Gen. Robert E. Lee along Richmond’s bucolic tree-lined Monument Avenue.

He’s there to erase our past in order to control our future.

Northam said Virginia had set “high ideals” in the past 400 years about freedom and equality but had “fallen short” of them.

Taking down the Lee monument is an extraordinary victory for civil rights activists who have long called for its removal. Several efforts in the past to remove the statue have been fought bitterly and failed.

Ahead of the governor’s announcement, hundreds gathered around the Lee monument.

Lee’s statue will be sent to a storage facility.

“That is a symbol for so many people, black and otherwise, of a time gone by of hate and oppression and being made to feel less than,” said Del. Jay Jones, a black lawmaker from Norfolk. Jones said he was “overcome” by emotion when he learned Lee’s statue was coming down.

Robert E. Lee was one of America’s finest sons, who served with great honor and courage defending his homeland from, ultimately, the New York City banksters who are still looting us today.

Richmond’s Mayor Levar Stoney, who spoke before the governor, said he plans to seek the removal of all of the other Confederate statues along Monument Avenue, which include Confederate President Jefferson Davis and Confederate Gens. Stonewall Jackson and J.E.B. Stuart. Those statues sit on city land, unlike the Lee statue, which is on state property.

I assume Lee will be replaced with a statue of William Tecumseh Sherman as a symbol of modern blacks continuing his March to the Sea by burning out the South’s cities and businesses.

“Richmond is no longer the capital of the Confederacy,” Stoney said. “We have two pandemics in this country — COVID-19 and racism. One is six months old, the other, 400 years old. As the events of the last month, the last two weeks have made clear, both are lethal, especially for black and brown.”

That “400 years old” is a reference to the New York Times’ 1619 Project. The Project’s maliciously inaccurate depiction of American history continues. I wasn’t joking about the New York City banksters being the scumbags behind the war’s prosecution. 150 years later and NYC’s war on America still hasn’t stopped.

He added, “This is our moral duty. We know better and now that we know better, it’s time to do better.”

In 1996, Richmond decided to integrate its most famous street by putting a statue of black tennis champion Arthur Ashe, who was a Richmond native. That statue will remain.

I wasn’t even close with my prediction of Sherman as a replacement.

I had the privilege, a couple years ago, of visiting Memorial Avenue while interviewing for a job I eventually passed on. Little did I know at the time, that I would outlive the history of the South. It moved me to tears to reflect upon what could have been and (with the possible exception of Davis) the noble character of those who gave all to see if “any nation so conceived could long endure”. Alas, it was not to be. 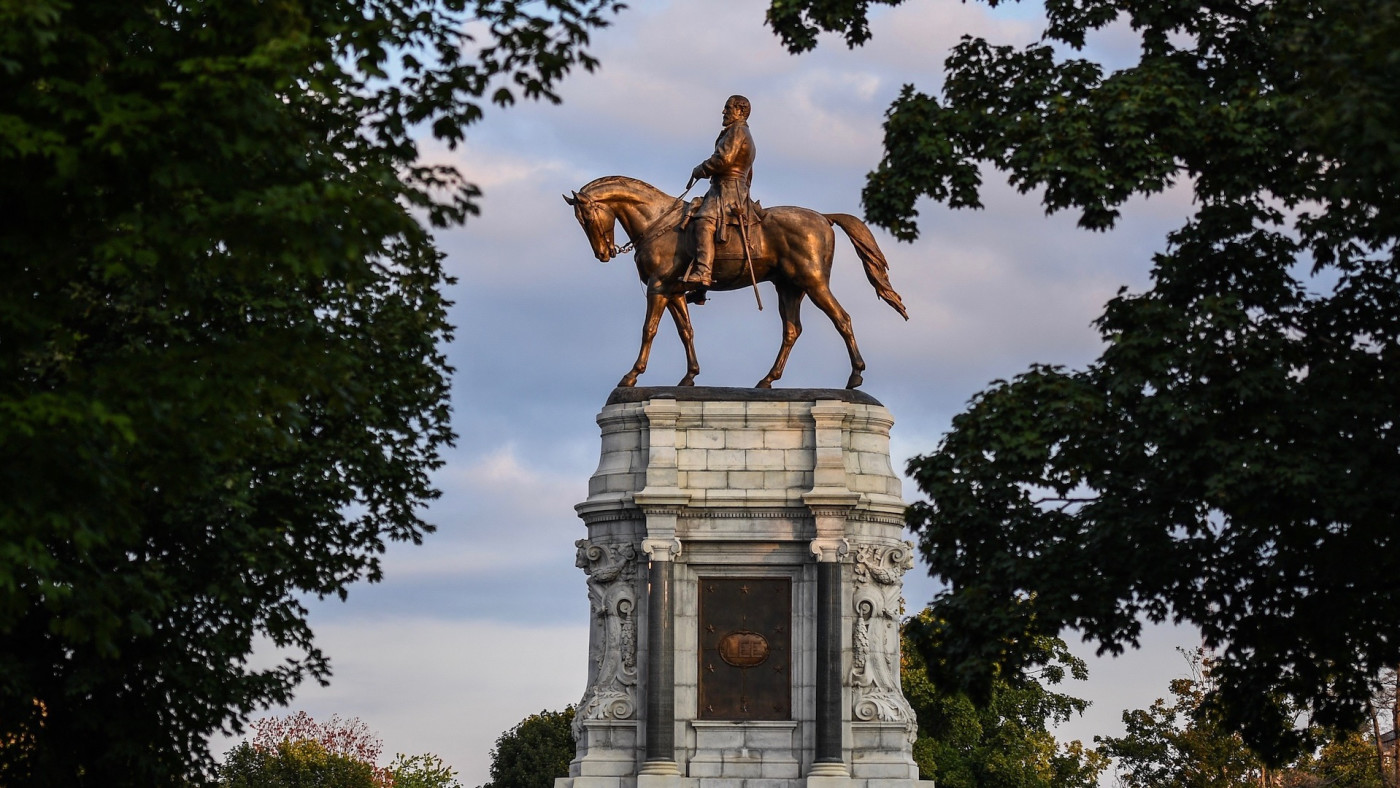 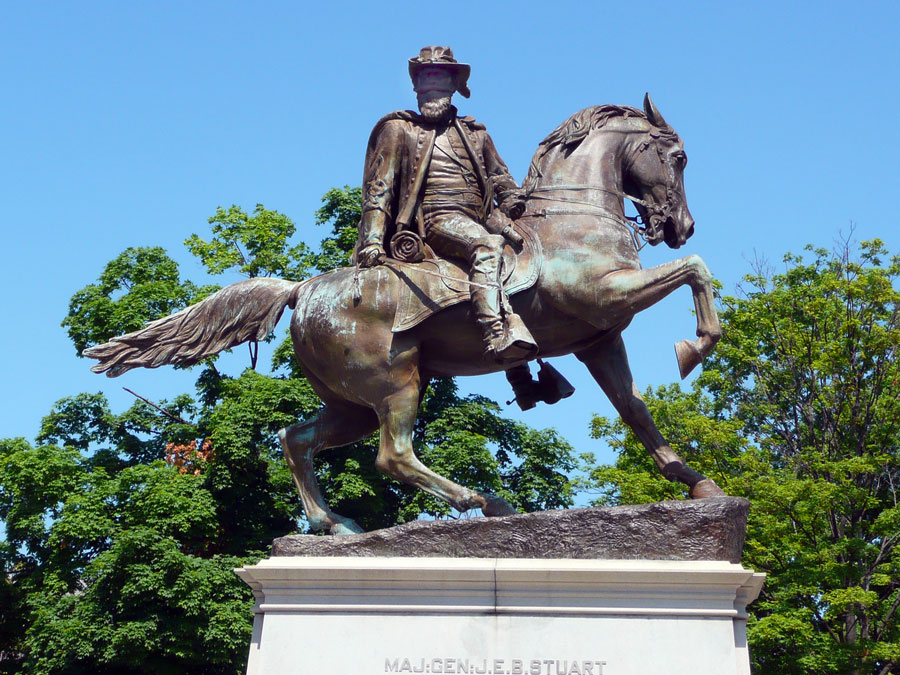 The Battle of Yellow Tavern occurred May 11, at an abandoned inn located six miles (9.7 km) north of Richmond. The Confederate troops resisted from the low ridgeline bordering the road to Richmond, fighting for over three hours. After receiving a scouting report from Texas Jack Omohundro, Stuart led a countercharge and pushed the advancing Union troopers back from the hilltop. Stuart, on horseback, shouted encouragement from in front of Company K of the 1st Virginia Cavalry while firing his revolver at the Union troopers. 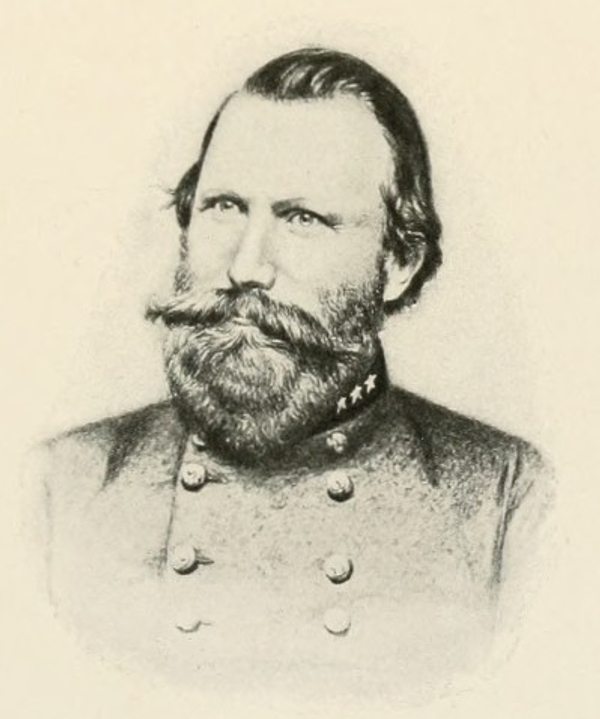 As the 5th Michigan Cavalry streamed in retreat past Stuart, a dismounted Union private, 44-year-old John A. Huff, turned and shot Stuart with his .44-caliber revolver from a distance of 10–30 yards. Huff’s bullet struck Stuart in the left side. It then sliced through his stomach and exited his back, one inch to the right of his spine. Stuart fell into the arms of Company K’s commander Gus W. Dorsey. Dorsey caught him and took him from his horse. Stuart told him: “Dorsey…save your men.” Dorsey refused to leave him and brought Stuart to the rear.

He suffered great pain as an ambulance took him to Richmond to await his wife’s arrival at the home of Dr. Charles Brewer, his brother-in-law. As he was being driven from the field in an ambulance wagon, Stuart noticed disorganized ranks of retreating men and called out to them his last words on the battlefield: “Go back, go back, and do your duty, as I have done mine, and our country will be safe. Go back, go back! I had rather die than be whipped.”

Stuart ordered his sword and spurs be given to his son. As his aide Major McClellan left his side, Confederate President Jefferson Davis came in, took General Stuart’s hand, and asked, “General, how do you feel?” Stuart answered “Easy, but willing to die, if God and my country think I have fulfilled my destiny and done my duty.” His last whispered words were: “I am resigned; God’s will be done.” He died at 7:38 p.m. on May 12, the following day, before Flora Stuart reached his side. He was 31 years old. 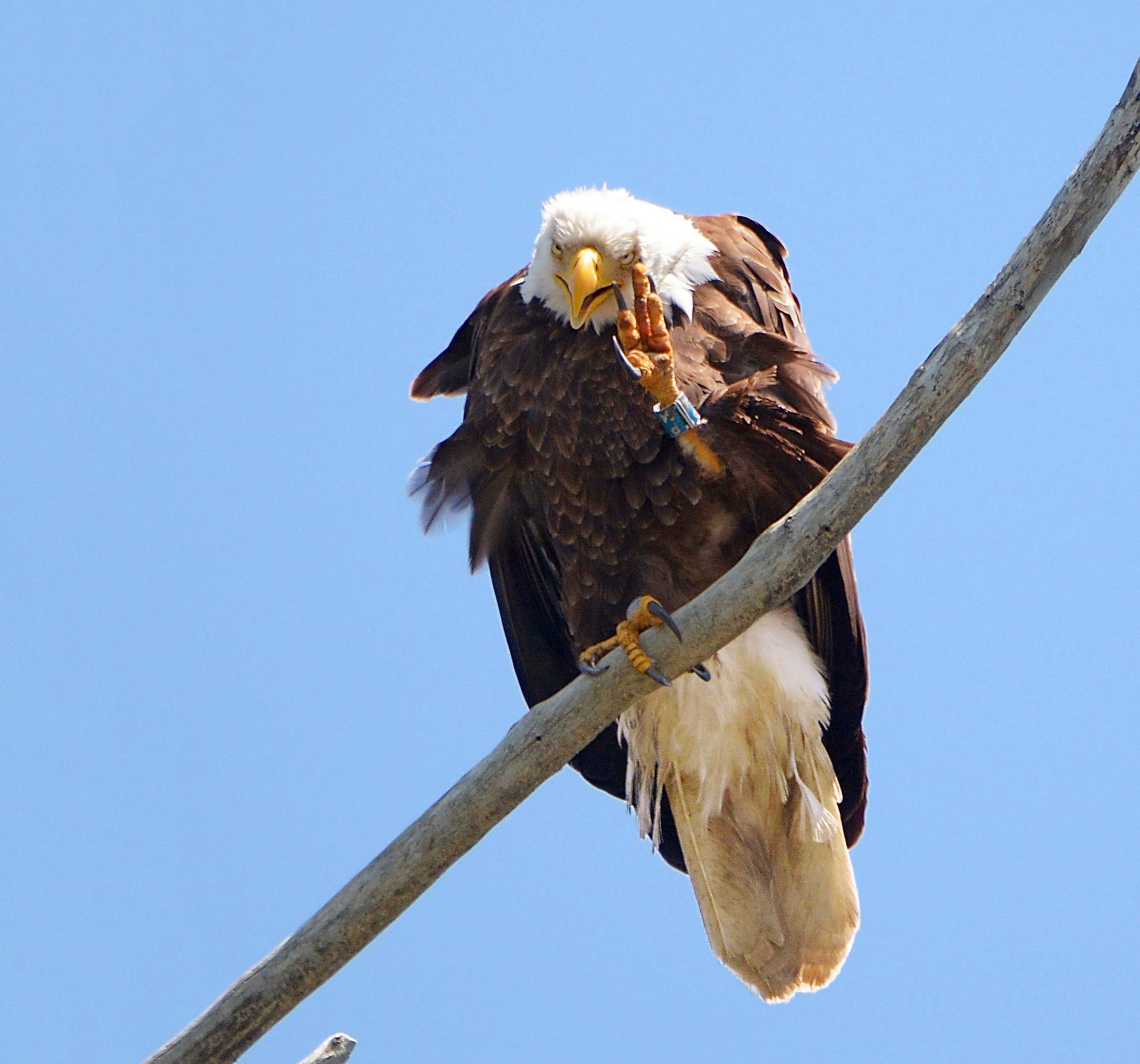 One wonders if Northam and Stoney (heh) will outlive the memory of the lynch mob. They are unworthy to touch those statues, let alone defile them.