I finally have enough data to weigh in. 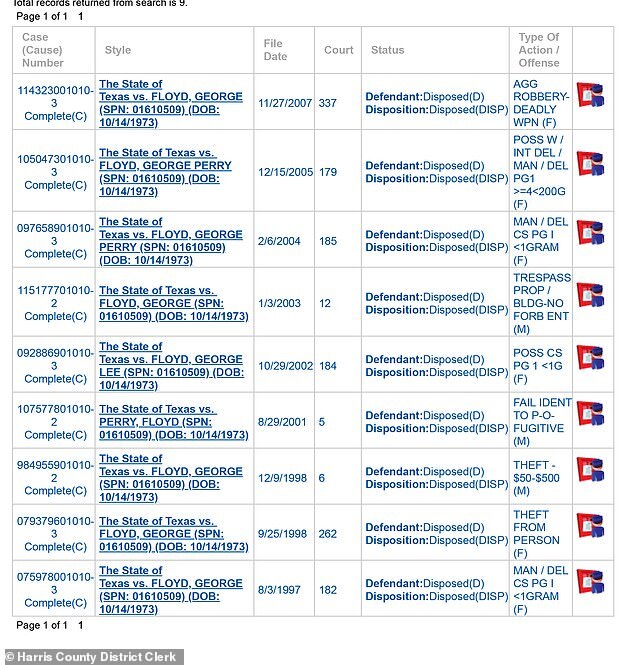 That’s three cocaine possession/dealing charges, petty theft, trespass, aggravated armed robbery and failure to provide ID while a fugitive. The armed robbery was as part of a 6-man gang that did a home invasion, probably on a rival gang.

After his release, Floyd traveled to Minneapolis to restart his life as… a bouncer for a nightclub? The choice of a convicted drug dealer for that job is hella suspicious. Then the infamous arrest happened on a charge of passing counterfeit money.

Derek Chauvin, the Minneapolis police officer who was arrested and charged with third-degree murder Friday after he was caught on video using a knee chokehold on George Floyd, had 17 complaints against him over nearly 20 years of his service, all but one of which ended without disciplinary action, according to police records released Thursday.

Less than one complaint per year is pretty good for a street cop.

Kristofer Bergh, a 24-year-old white man from Minneapolis, was one of the people who filed a complaint against Chauvin and another officer, accusing them of pulling a gun on him and his teenage friends in 2013 after one of the teens shot a Nerf gun that may have struck a passerby.

Around two months after Bergh filed the complaint against both officers, the Minneapolis Police Department sent him an email saying it had investigated his complaint of “inappropriate language and attitude,” but that it could not publicly release details of any disciplinary action against the officers.

But no violence? So, not all of these complaints were of actual misconduct.

On May 1, 2013, Bergh was a 17-year-old senior at South High School in Minneapolis. He and three of his friends were playing a game of Assassins — an annual event organized by the students where teams of 10 were given a “hit list” of 10 targets that they had to eliminate by hitting them with Nerf darts.

That takes me back to my youth. As a gamer, I knew that “Assassin” fad. It created a lot of scares and false alarms for law enforcement, particularly college campus security.  I’m not familiar with this particular version, however. Most variants of Assassin involved the participants randomly trading selfies at game-start and acting individually. When you got “killed”, you gave your target’s picture to the winner so he could keep playing. It ends with a party at which players turn in their picture collections. By 2013, it should have been accepted practice to use squirt guns or simple “tag you’re out” methods of “killing”. And maybe not even squirt guns; thanks, Antifa.

Bergh said three of his teammates had been dropping him off at home in a car when one of his friends shot a Nerf dart outside the car window that may have struck a passerby.

Minutes after the car pulled up to Bergh’s house and he got out of the car, Chauvin and his partner pulled up in a police car behind them without any sirens or lights and with “their guns drawn on me,” Bergh said.

“I didn’t know that they were behind us until I turned around and saw them already aiming guns at me,” Bergh said. “It was terrifying.”

Bergh said he immediately dropped his backpack and trumpet on the ground and complied with their orders.

According to Bergh, the officers then approached their car with their “guns drawn” and continued to command them to keep their hands up.

Noah Hanson, who was one of the teens inside the car at the time, told BuzzFeed News that the other officer had aimed his gun at them, but did not recall if Chauvin also had his gun out.

Hanson, 23, said the other officer had his gun “pointed directly at my face from two feet away.”

Tesla Petersen, 24, who was driving the car at the time, told BuzzFeed News that she did not remember if either of the officers had their guns out.

All three of them recalled that the officers had pulled up behind the car without any lights or sirens on and had shouted at the teens to put their hands up in the air.

Hanson said he thought it would’ve been clear to the officers what had happened after he and his friends told them that they were just Nerf guns.

“They saw the Nerf guns on our laps,” Hanson said, but added that the officers continued to be “very suspicious.”

Ya think? A group of teens joyriding with Nerf guns in their laps and shooting at people complained that police drew real guns until they were sure all their guns were fake?

Bergh said the officers confiscated the Nerf guns in their laps and in the trunk of the car.

When one of the teens admitted to the officers that he was the one who had shot the Nerf gun that may have hit a passerby, Hanson, Bergh, and Petersen said the officers took their friend to their squad car and “detained him” for a while.

“That friend later told us that in the squad car he was verbally berated further, being told that he was a worthless piece of shit who is soon going to have a rap sheet a mile long,” Bergh said.

One of the officers told the teens that “we’d all be 18 by the end of the year, meaning we can all go to ‘big boy jail,’” Bergh recalled.

He said the officers finally released their friend “after what seemed like an eternity” and returned their Nerf guns.

Also standard procedure. The cops eventually realized they were just kids fooling around, read them the riot act and then released them with their property. Cops have done that for centuries. Take your ripping, learn the lesson and move along with your life. God knows I’ve had to endure that a couple times.

But Bergh whined that the police were mean to him… even seven years later. Gammas never forgive a slight.

“If I were black, I would probably be dead,” Bergh wrote in a Facebook post Wednesday. “Our white privilege saved our lives.”

Fuck off, whiny soy boy. Your “white privilege” was following Chauvin’s orders. I haven’t yet seen the full video of Floyd’s arrest (if there is one) but I predict there was some failure to comply between Chauvin’s hello and Chauvin’s knee in Floyd’s business.

Chauvin was a 19-year veteran of the department who began his career at the Minneapolis Police Academy in 2001. He has also been involved in three shootings during his career, one of which turned deadly. Only one of the 17 complaints against him resulted in disciplinary action constituting two letters of reprimand, according to police records.

Again, that’s pretty good for a street cop. Not consistent with Chauvin being an off-the-reservation bully.

Lastly, what about this nightclub that both Chauvin and Floyd worked at?

A white Minneapolis police officer and the black man he’s charged with killing both worked as security guards at the same Latin nightclub as recently as last year, but its former owner says she’s not sure if they knew each other.

What she is certain of is how aggressive Officer Derek Chauvin became when the club hosted events that drew a mainly black clientele, responding to fights by taking out his mace and spraying the crowd, a tactic she told him was unjustified “overkill.”

It probably wasn’t. We’re seeing right now what happens when bystanding blacks get worked up over the outrage du jour. They are racially prone to group behavior.

“He would mace everyone instead of apprehending the people who were fighting,” said Maya Santamaria, former owner of El Nuevo Rodeo club in Minneapolis. “He would call backup. The next thing you would know, there would five or six squad cars.”

While Chauvin’s off-duty job at the El Nuevo Rodeo club stretched over 17 years until a few months ago, Floyd only started working there recently as a bouncer and only worked about a dozen events put on by “African American promoters.”

The manager thought Chauvin’s violent conduct towards blacks was “overkill” then continued to employ him for 17 years?

Santamaria, who sold the venue within the past two months, said she doesn’t believe the two men knew each other prior to their fateful encounter Monday night. If Chauvin had recognized Floyd, she said, “he might have given him a little more mercy.”

The new management hiring a convicted, violent felon with drug connections to “work security” would also be a good reason to quit.

She said Chauvin got along well with the club’s Latino regulars, but his tactics toward unruly customers on what she referred to as “African American” nights led her to speak to him about it.

So much for accusations of white supremacy.

“I told him I thought this is unnecessary to be pepper-sprayed. The knee-jerk reaction of being afraid, it seemed overkill,” Santamaria said. “It was a concern and I did voice my opinion, but police officers have a way of justifying what they do.”

On Friday, protesters gathered in front of another Chauvin home in Windermere, Florida, which he has owned since 2011 with his wife, Kellie, a Laotian refugee, realtor and former Mrs. Minnesota pageant winner.

That’s an interesting factoid about Chauvin.

Chauvin has a very rectangular face. Such people are prone to bursts of high energy rather than a steady level of activity. Intelligent to judge from the lines on his forehead. A narrow nose and thin lips indicates introversion. The combination of energy bursts, introversion and life as a beat cop make me wonder if he’s an adrenaline junkie.

The lines on Floyd’s face remind me of many boxers/weightlifters after they get old. This is confirmed in the infamous video by his being visibly muscled. Very passionate to judge from thick lips. Thick brow; wide, flat nose; this is a very physical guy. I wouldn’t be surprised if his death involved complications from long-term steroid use.