Bless their insolent hearts, unmasked enthusiasm and drunken swaggers! Fun shall not be locked down!

Clean up resumed early Monday with a few people, then it grew throughout the morning to a large number of people coming down to help out. More shovels and buckets were brought over. All ages pitched in, even the non-skaters jumped in and started shoveling out sand…

The city dumped 37 tons of sand on their skatepark as part of COVID lockdown, so skaters used it to ride dirt bikes. Then they dug up the sand and continued skating.

Last week, the city of San Clemente, California, decided to dump 37 tons of sand on a local skatepark in order to prevent kids from skating during the coronavirus lockdown. But just a few days later, local skaters were shredding again.

A group of determined skaters brought dustpans, shovels, and buckets to the park over the weekend in order to dig up the sand. Remarkably, by Sunday evening, much of the skatepark was usable.

The dig-up was filmed by motocross videographer Connor Ericsson, who headed over to the skatepark to help the effort and use the sand as a dirt bike course.

“Took advantage of all the sand the city dumped into the San Clemente skatepark then helped some local skaters dig it all out so they could do some social shredding,” read the caption of Ericsson’s Instagram post Sunday, which showed him riding his bike in the park and then digging up the sand. …

San Clemente Skatepark Coalition, the local nonprofit that raised $50,000 to light the park, said that the city didn’t even reach out to contact them before deciding to dump the sand. …

Now, city officials will likely have another decision to make as the park is once again effectively up and running.

Skateboarders may have drawn a line in the sand after the city of Pittsburgh shut down their neighborhood skateboard park. Only hours after Pittsburgh dumped sand on a skate park to prevent people from skating, a pile of sand was deposited at Pittsburgh’s city hall in what very well could be a dirty form of revenge.

The Polish Hill skate park was transformed into a sandbox after Pittsburghers continued to use the park despite the stay-at-home lockdown. Pittsburgh Department of Public Works Director Mike Gable said they locked up the park, but people cut the locks to gather at the park.

“We don’t take any pride or pleasure in doing this,” Gable said on Thursday. “The park is closed and we kept the gate locked, but they cut the lock or the chain or they hopped over the fence. People have to listen to what the directive is and the directive is social distancing.

Yeah, Mike? Well, listen to THIS!

Hours after the Steel City shut down the skating park, a pile of sand was left at the doorway to Pittsburgh’s City-County Building, which is 2.5 miles from the Polish Hill skate park.

Public Safety spokesman Chris Togneri said police were investigating the sand dump at the revolving door of city hall, but declined to comment if the incident was revenge for the skate park getting closed. If this was retaliation for the skate park, this would be one interesting way to tell the city government to go pound sand. 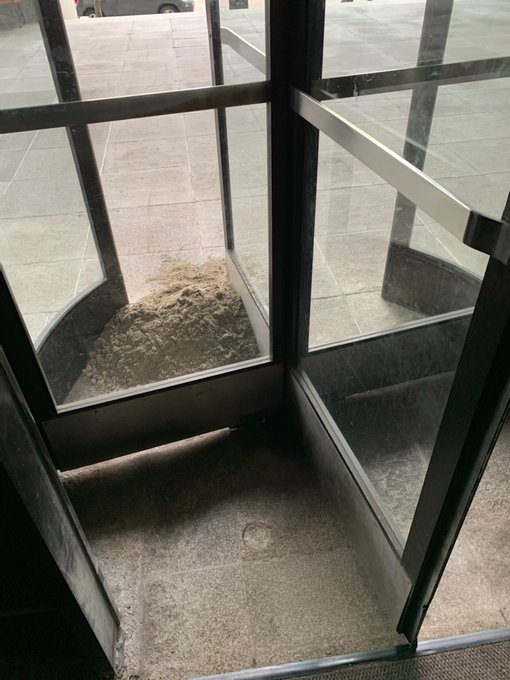 I assume the police “investigated” because the alternative was spending five minutes to clean it up.

For the past 10 weeks Australia’s capital city streets have been turned into giant skate parks, providing a once in a lifetime opportunity for urban boarders.

One Sydney skate shop said business has been booming since the stay-at-home orders were introduced in March. …

‘I just knew the city was going to be empty and I thought there probably won’t be too many securing guards to kick me out either,’ Australian Olympic hopeful Aimee Massie told Daily Mail Australia.

The once fringe sport was set to make its debut at the 2020 Tokyo Games before it was postponed until 2021 due to the deadly pandemic. 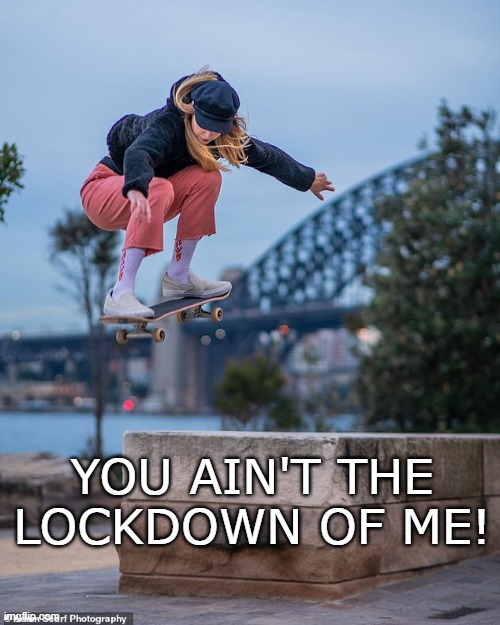 With laws around skateboarding for exercise somewhat unclear under the strict lockdown measures, Mr Estigoy said he wasn’t sure whether he could head outside.

According to the rules, skateboarding for exercise or transport was permitted, but riding for recreation was not.

‘When I saw people riding bikes around I thought, this is my form of exercise and it’s also my work because I need to get footage for sponsors,’ he said.

Sounds legit! You do you, kid.

‘I ran into heaps of other skaters because they all had the same idea.’

ALL of you kids! Bwahaha! Get on my lawn!

Three opportunistic skateboarders took advantage of an empty expressway during the coronavirus lockdown by riding down an off-ramp.

The chancers dressed in dark-coloured clothes ride their boards and perform flips and tricks on the three-lane road in Toronto, Ontario, Canada.

Traffic on the road is light but a handful of cars can be seen in the distance approaching the riders along a Gardiner Expressway ramp.

The link has video! 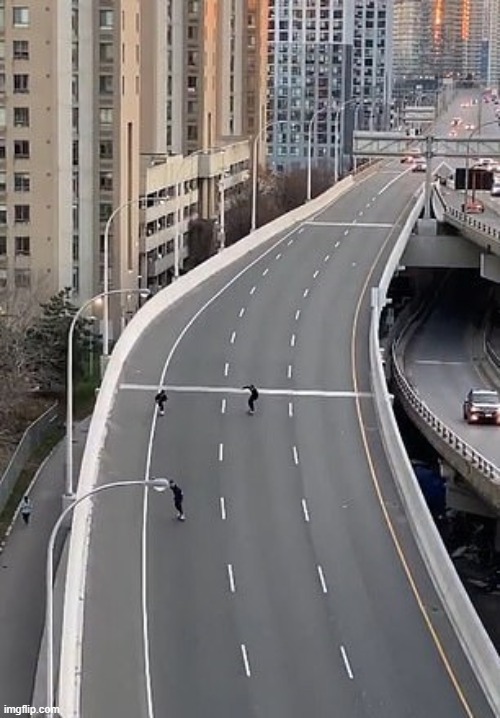 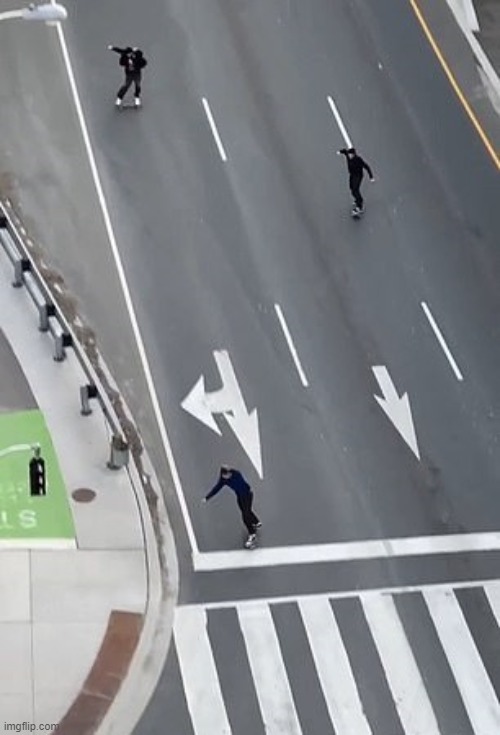 Toronto traffic police said: ‘We are seeing more and more of these grand standing and publicity seeking stunts.

They didn’t dress in all black to get publicity. They did it for fun and a fast getaway!

‘The Toronto Police do NOT condone this behaviour and will investigate those who choose to act in this way.’

Constable David Hopkinson told Global News Canada that the law considers skateboarders as pedestrians and pedestrians are not allowed on the highway.

He also said the particular situation was a safety issue.

‘They’re all dressed in black and it was getting dark. If one of them fell a car would have a hard time seeing him,’ Hopkinson said.

The Toronto Star reported each of the skateboards was handed a $110 fine for their risky journey.

That’s all??? *Gunner Q glances at the inline skates in his closet.*

REUTERS: The closure of schools in Brazil due to the coronavirus pandemic gave 11-year-old prodigy Gui Khury plenty of time to perfect his skateboarding skills as he became the first person to land a 1080-degree turn on a vertical ramp.

More than two decades after Tony Hawk completed the first 900-degree turn, Khury shattered a long-standing record by flying off the top of a ramp and completing three full spins in the air before landing cleanly and skating off. The manoeuvre has long been one of the holy grails of skateboarding.

“The isolation for the coronavirus helped because he had a life that was about school and he didn’t have a lot of time to train, when he got home from school he was tired,” the skater’s father Ricardo Khury Filho told Reuters.

“So now he is at home more, he eats better and he has more time to train and can focus more on the training so that has helped.

“He has an opportunity to train here, if he didn’t have (the skate facilities) … he would be stuck at home like everyone else and unable to do sport. So the isolation helped him focus.”

During lockdown, Khury’s family make the 20-minute journey to his grandmother’s house on most days to deliver food and drop him off so that he can train on the vertical ramp, bowl and street course they had built in her back garden.

It was on that ramp that the pre-teen completed his historic feat.

He was already the youngest skateboarder to complete the 900-degree turn, a feat he pulled off aged eight.

“I was like, oh my God, what did I just do?” Gui Khury told Reuters on Sunday, two days after achieving his historic 1080. “I was just like OK, I landed it. Now I am going to celebrate.”

The boy’s celebration was “mac and cheese at home” with his family.