I could have told you, by appearance alone, that this celebrity rock star was not a real Christian: 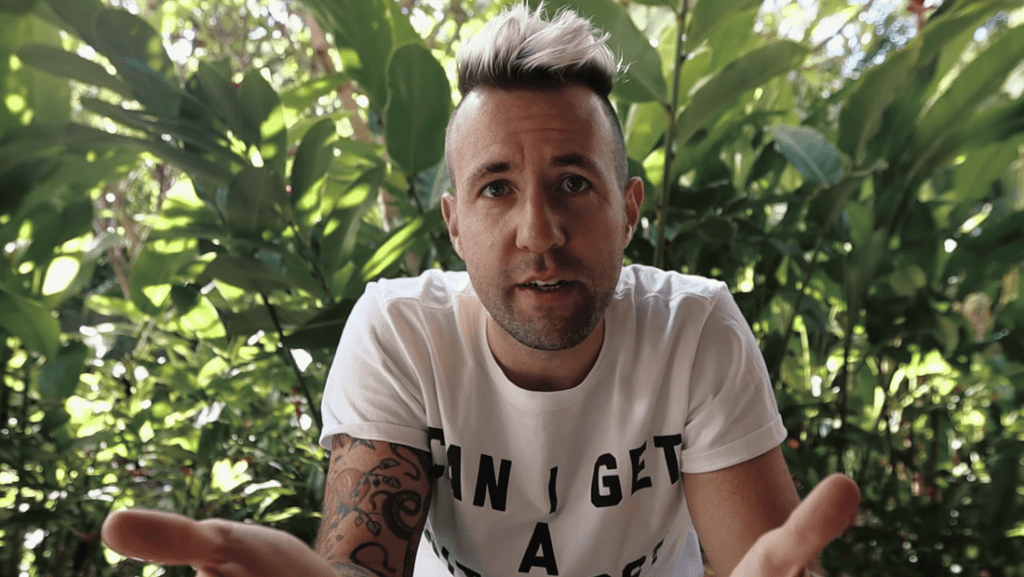 Is there a more homosexual hairdo than that in all of reality? What skunk died to save him from willful baldness? While haircuts do not cause unbelief in God, they certainly can be symptoms of a belief being strangled by the cares of this world because God is patriarchy personified.

Jon Steingard, the long-time lead singer of the Christian music band Hawk Nelson, announced on Instagram that he no longer believes in God.

“I’ve been terrified to post this for a while – but it feels like it’s time for me to be honest. I hope this is not the end of the conversation, but the beginning. I hope this is encouraging to people who might feel the same but are as afraid to speak as I am. I want to be open. I want to be transparent with you all – and also open to having my heart changed in the future. I am not looking for a debate at all – just a chance to share my story in the hopes some good can come from it. I love you all.”

Okay, no debate and we’ll see what good can be milked from this. Better an honest atheist than… what he was before.

According to a comment on Hawk Nelson’s website, Steingard’s bandmates knew that he had been struggling for a while:

“As some of you know Jon and Jess embarked on the family life this year with the addition of Lil G, aka Grey. He’s the bomb diggity, but after no sleep and lots of adjusting, I saw it take a toll on Jon personally. I knew family was more important than this album, so I asked him to put it all on hold. Maybe forever, maybe until it was right. These guys I get to share this band with, are family. And family should always come first. It made me question just how hard we should be pushing to “make” this album … But Jon blew me away, again, as he does each and every album. He doubled down. We and you and all got deep into prayer and asked for help.”

Family does not come first for the Christian. God comes first.  Speaking of group associations…

Based on my hairdo methodology, both guys on the right are not Christian. Jon and… not sure… these guys change their appearances frequently and dramatically. Anyway, we’ll see if history proves me right.

The leftmost guy is probably the drummer to judge from his arm muscles, not that that’s a high standard for this group. Second from left is probably a Bucky Beta Christian.

According to Steingard, he was a pastor’s child and grew up with Christianity having a major influence in his life since childhood. Steingard was the oldest of three children and he started learning how to play the guitar when he was nine years old, according to News Release Today.

“Pastor’s kid” is the Protestant equivalent to “altar boy”.

Steingard married Jessica Hubbard in March of 2007 and they lived in Nashville, Tennessee, according to News Release Today. The couple moved to San Diego, California where they currently live. Steingard is also a filmmaker and director at Steingard Creative.

Oh you fool, Jon. You moved to the Land of His-Fault Divorce after getting married!

Steingard said his family was always about the church and grew up with a shared belief so “central to everything, you simply adopt it.” Steingard said that he was an ardent follower of Christianity, praying for signs and participating in church, youth groups, conferences and ministry. However, even then, he said he was disturbed by some of the things he saw:

“Praying in public always felt like some kind of weird performance art. Emotional cries such as “Holy Spirit come fill this place” always felt clunky and awkward leaving my lips. A youth conference I attended encouraged every teen to sign a pledge that they would “date Jesus” for a year. It felt manipulative and unsettling to me. I didn’t sign it.”

That’s a typical experience of the charismatic side of Christianity and Jon is perfectly normal to find it manipulative and unsettling. He proceeded to a Baptist-style denomination where his doubts continued:

Steingard said he reflexively ignored his doubts and thought he was overthinking it. However, he said he eventually started questioning the problem of evil and specifically, “natural evil” — hurricanes, disease, etc.

Cracks appeared in the Boyfriend-Jesus deity. “He wants me to be happy… but this world He made is full of suffering and evil?”

He said he became disturbed by how God’s change in demeanor from the Old Testament to the New Testament as well as how much killing he realized was a part of the Bible. He also said he was disturbed about contradictions he found in the Bible and was dissatisfied with the answers he got.

Both Jon’s father and Jon’s father-in-law were pastors. Neither could explain that the OT God is the same as the NT God. That’s pathetic. Sometimes a man’s son freely chooses against God despite being raised well but that is not Jon’s situation.

I was asking about a verse in 1 Timothy that seems really oppressive of women. It indicates that women shouldn’t be in church leadership, shouldn’t teach men and shouldn’t wear their hair in braids. To me, that seemed less like the message of the loving God that most Christians believe in now, and more like the ideas that would have been present in the culture at the time … a male-dominated society where women were treated less like equals and more like property.

This is old hat to us Red Pilled. Interesting that he believes a loving God is one that would treat women as being equal to men when even secular biology puts the lie to that.

Steingard said his father-in-law, also a pastor, told him to read the Bible in its original Greek. But Steingard said the thought that the Bible was imperfect sent him spiraling into a depression.

This, THIS is why I have nothing but scorn for clergy who resort to dead language editions of Scripture when people come to him with doubts. “You’re not smart enough to understand what you believe! You’d be a better Christian if you were better ekshu-caydid! I’m so smart, I can’t explain what I can read in five different languages!”

I hope God kneecaps that pastor as cruelly as he kneecapped his son’s faith.

Once I found that I didn’t believe the Bible was the perfect Word of God — it didn’t take long to realize that I was no longer sure he was there at all. That thought terrified me. It sent me into a tailspin … Over the past year I’ve occasionally mentioned publicly my struggles with depression. This is what really kicked that off.

A logical conclusion. If God doesn’t care enough to communicate clearly with humanity then is there any point to God being involved with humanity in the first place?

He said questions about his faith, and especially what he should teach his children, “led me into a very dark place for a while.”

In his post, Steingard said he could no longer hide the struggle he was having with his faith and felt like it would be disingenuous to withhold it, describing it as a sweater that unraveled over the years:

The process of getting to that sentence has been several years in the making. It didn’t happen overnight or all of a sudden. It’s been more like pulling on the threads of a sweater, and one day discovering that there was no more sweater left.

The more he tried to lean on Christianity, the more his career pressured him to “walk the talk”, the more he realized the Church was a social club for emotionally fragile frauds.

He also said that he was “stunned” by how many other Christians he knew who felt the same.

No Hell is hot enough for the modern clergy-cuck. The damage they have done to Christ, to society and to their own children is OFF THE CHARTS.

Steingard noted that with the band being less productive, he had less to lose — “… we’ve all found other work and careers to focus on for the time being. In order to make sure I’m able to keep providing for my family, that had to be the case before I could be totally honest — and that fact is one of the issues I have with the church and Christian culture in general.”

Jon looks like a fairy fag because he was taught that men and women are the same… thus, looking effeminate is a way to worship God… thus, I could look at his dead-skunk-do and know that this man does not know masculinity. He does not know Father God.

And with human fathers like he had, it’s no wonder he ended up that way.

9 thoughts on “Jon Steingard: Another Casualty of Boyfriend Jesus”