And it’s hailed as good news! I can scarcely believe how easily the enemies of Christ have seized total control of society.

The headline really says it all. First, the State closed churches–a crime against America’s secular laws–and they didn’t even need police to enforce it. Now they dictate the terms that churches must abide by in order to be permitted to hold services again and the only pushback is clergy demanding vaccines before they reopen. And just to put the cherry on top, THEY BANNED THE COLLECTION PLATES. If anything was going to shift a Cuckservative off his ass, it would surely have been that.

They keep using the phrase “new normal”. I’m the only person in my meatspace freaking out about it. Everybody else has already forgotten what a handshake is.

The state released guidance under which county health departments can approve the reopening of churches, mosques, synagogues and other houses of worship. They have been closed since Gov. Gavin Newsom issued a stay-at-home order in March to slow the spread of the coronavirus.

It’s not immediately known how soon in-person services will resume. Counties that are having success controlling the virus are likely to move quickly. Others with outbreaks — such as Los Angeles County, which has about 60% of California’s roughly 3,800 deaths — may choose to delay.

The guidelines ask worshippers to wear masks, avoid sharing prayer books or prayer rugs and skip the collection plate. They also say to avoid large gatherings for holidays, weddings and funerals and warn that activities such as singing or group recitation “negate” the benefits of social distancing.

One wonders if the “guidelines” are mandatory. We’ll never know because not a single church is willing to disobey enough to find out.

It pisses me off that they’re careful to ban weddings and funerals. As if any plague in history has ever been spread by those, or any people celebrated them by picking each other’s noses. How much more blatant do they need to make social engineering before people recognize it as social engineering?

The guidelines say even with physical distancing, in-person worship carries a higher risk of transmitting the virus and increasing the numbers of hospitalizations and deaths and recommend houses of worship shorten services.

Each county will have to adopt rules for services to resume within their jurisdictions and then the guidelines will be reviewed by state health officials after 21 days. The guidelines include limiting gatherings to 25% of building capacity or 100 people, whichever is lower.

In Los Angeles County, Rabbi Shalom Rubanowitz of the Shul on the Beach in Venice Beach said he hopes his congregation can meet for this week’s Shavuot holiday, to celebrate when Jews received the Torah.

Thus proving it’s the atheists pushing this anti-human agenda, not the Jews this time.

The congregation will have to figure out how to provide temperature checks and provide a place for individual prayer books and shawls. Orthodox Jews do not use technology during the Sabbath and may not carry most personal items.

I don’t believe that temperature checks is an effective way of determining whether somebody is sick. Its purpose is most likely humiliation… ditto the wearing of ineffective cloth masks.

Some church leaders aren’t eager to reopen. The Rev. Amos Brown, pastor of Third Baptist Church in San Francisco and head of the local NAACP chapter, led a protest Monday against reopening.

“We are not going to be rushing back to church,” he said by phone, noting that many leaders of his denomination have been sickened or died nationwide.

Yeah, in Chicago. Of lead poisoning. 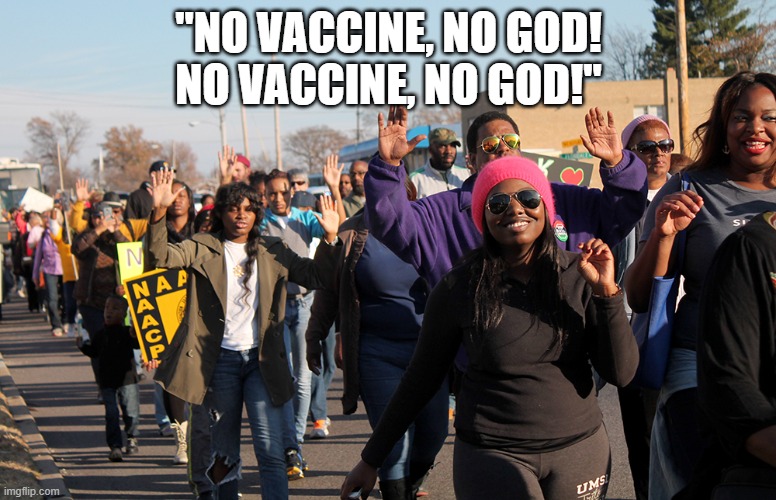 Many have been eagerly waiting an announcement on religious services after Newsom began relaxing constraints on stores and other secular outlets as part of a four-phase plan to reopen the economy.

I spent the last weekend helping a friend empty product out of his storefront… never to reopen. He was smart. He noticed that the banks that got free money from the Feds turned around to LOAN that free money out, when he had no idea when he’s be allowed by the government to make revenue again, and he said no to that usurious bullshit. It was the right call but it ended his store.

The Roman Catholic Diocese of Orange announced last week that it is phasing in public Masses beginning June 14, starting with restricted numbers of worshippers. At first, choirs will be banned, fonts won’t contain holy water and parishioners won’t perform rituals where they must touch each other.

You know what happens when the church obeys the State? God does not get worshiped the way He wants. I’m sure the Big Guy accepts that the welfare of humans is far more important than any show of respect towards Him could be. It’s not like all of reality revolves around God! That’s not just me being sarcastic, that’s RCC policy:

“We know that God is with us, but at the same time we have to be careful and make sure that we protect each other in this challenging time,” Bishop Kevin Vann said Friday.

Some 47 of the state’s 58 counties have received permission to move deeper into the reopening by meeting standards for controlling the virus. The state on Monday cleared the way for in-store shopping to resume statewide with social distancing restrictions, although counties get to decide whether to permit it.

The social distancing restrictions are intended to be permanent per every iteration of reopening guidelines I’ve seen.

Some places of worship around the country opened over the weekend after President Donald Trump declared them essential and the federal Centers for Disease Control and Prevention released guidelines for reopening faith organizations.

Some “places of worship” back the Trump guidelines while other back the Newscum guidelines, but none of them defy government enough to practice Communion.

Places of worship, eugh. They’re called churches! And to Saudi Arabia with any offended Muslims!

In California, most houses of worship have complied with social distancing, making do with online, remote and a few drive-in services.

It’s ironic that I, a man who refuses to attend church, cares more about how well the churches obey God than the churches themselves do. But that’s why I left, because the churches were social clubs in heavenly drag and I couldn’t live a lie.

In the Roman Catholic Archdiocese of Los Angeles, Archbishop Jose Gomez called on parishes to celebrate Pentecost — a major religious day for many Christians — next Sunday by holding food and blood drives.

“I think it is important for all us of to be aware that this is a very dangerous illness, and we are making sure that everything is OK when we come back and celebrate the Eucharist together,” he said.

But several thousand churches have vowed to defy the current stay-at-home order on Pentecost, arguing they can do so safely.

Safely as in social distancing by Trump’s rules, not safely as in risking “some small boils” in the name of Christ. What if some of us don’t care whether it’s safe to worship God? There’s not one church in North America for us.

Two church services that already were held without authorization have been sources of outbreaks; one in Mendocino County and the other in Butte County.

A Pentecostal church in San Diego County lost a federal appeal Friday in its quest to reopen immediately. The South Bay United Pentacostal Church of Chula Vista immediately filed an appeal with the U.S. Supreme Court.

Stop asking permission. Start disobeying. It’s why you clergy draw a salary, so you can survive persecution more easily than isolated dissidents.

Newsom “lacks authority to dictate to California’s faithful, how they may worship,” said Harmeet Dhillon, a San Francisco lawyer and the group’s CEO. “Let people who wish to worship safely and together, do so.”

I cannot believe that a San Francisco lawyer is honest. *checks Wikipedia* Dhillon is a Dot-Indian, former vice chairwoman of the now-defunct California Republican Party, ally of both the ACLU and Kamala Harris and has represented James Damore and Andy Ngo. Yep, she’s a political insider, working both sides of the political divide.

Modern clergy are disgusting, Godless worms who compost the State’s God-hating excrement. They’ve so effectively killed off belief in Christ Jesus that ordinary people are practically begging the government to become their new deity. In fact, the people are so cooperative with the New World Order, er, the “new normal”, that the State doesn’t even need its usual jack-booted enforcers.

But those enforcers are coming regardless, because God always preserves a remnant.