The lockdowns aren’t funny. California’s leaders and the CDC Elites have innocent blood on their hands.

Doctors in Northern California say they have seen more deaths from suicide than they’ve seen from the coronavirus during the pandemic.

“The numbers are unprecedented,” Dr. Michael deBoisblanc of John Muir Medical Center in Walnut Creek, California, told ABC 7 News about the increase of deaths by suicide, adding that he’s seen a “year’s worth of suicides” in the last four weeks alone.

Walnut Creek is in the Gay Area of California so the usual cracks about Democrat mental health apply, but even so the suicide rate is off the chart.

DeBoisblanc said he believes it’s time for California officials to end the stay-at-home order and let people back out into their communities.

“Personally, I think it’s time,” he said. “I think, originally, this was put in place to flatten the curve and to make sure hospitals have the resources to take care of COVID patients. We have the current resources to do that, and our other community health is suffering.”

In hindsight, the purpose was obviously never to “flatten the curve”. That was just the plausible lie of the hour. It’s long past time to enact punitive skepticism upon any government toad who predicts the future. The croaker ought to instantly lose his job, and his next job too if it’s at a nonprofit, university or media outlet, until history proves him right.

Kacey Hansen, a trauma center nurse at John Muir Medical Center for more than 30 years, says she’s worried not only about the increased suicide attempts but also about the hospital’s ability to save as many patients as usual.

This article doesn’t go into it, but hospitals have become heavily understaffed because all non-COVID specialists were deemed non-essential businesses. Do you have skin cancer? Bad knees? Cataracts growing in your eyes? CHEST PAINS? Too bad, the hospital must be kept on standby for the next (the first) outbreak of 100,000 virus victims needing ICU ventilators overnight.

I’ll have more at the end because 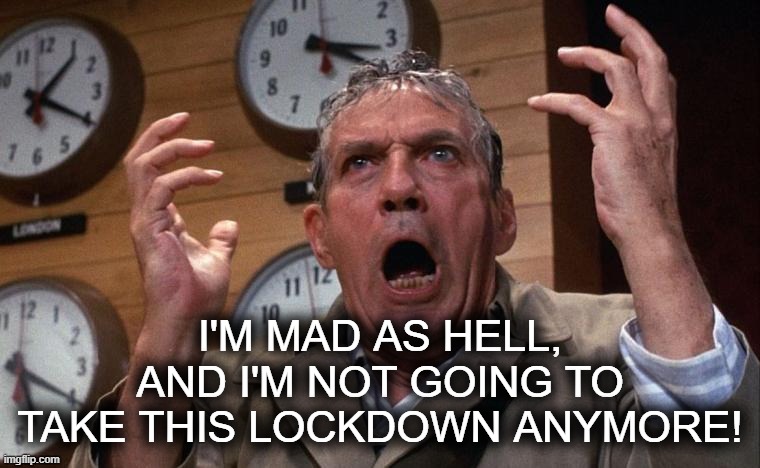 Businesses across California have started defying stay-at-home orders imposed by Democratic Gov. Gavin Newsom, and hundreds of protesters have hit the streets, making the argument that the orders were only meant to flatten the curve of the virus’s spread, which Newsom himself said was achieved in mid-April.

Exhibit “B” in “they lied to us about curve-flattening”.

Suicide has been an increasingly significant problem across the country as the coronavirus outbreak caused stay-at-home orders that led to unemployment and stress.

By late March, more people had died in just one Tennessee county from suicide than had died in the entire state directly from the virus.

That’s acceptable losses because that county’s leadership still has their jobs. As always, the first priority of government is the government.

A study published in early May suggested that the coronavirus could lead to at least 75,000 deaths directly brought on by anxiety from the virus, job losses, and addiction to alcohol and drugs.

Another study conducted by Just Facts around the same time computed a broad array of scientific data showing that stress is one of the deadliest health hazards in the world and estimated that the coronavirus lockdowns will destroy 7 times as many years of human life than strict lockdowns can save.

They should lose their jobs until this is confirmed… and receive back pay when it is, civil-asset-confiscated from the bureaucrats responsible.

Earlier this week, more than 600 doctors signed their names on a letter to President Trump, referring to the continued lockdowns as a “mass casualty incident” and urging him to do what he can to ensure they come to an end.

Here’s the letter. I had to crib it from Scribd, which is becoming a very frustrating paywall in its own right.

Thousands of physicians in all specialties and from all States would like to express our gratitude for your leadership. We write to you today to express our alarm over the exponentially growing negative health consequences of the national shutdown.

In medical terms, the shutdown was a mass casualty incident.

The red group receives highest priority. The next priority is to ensure that the other two groups do not deteriorate a level. Decades of research have shown that strictly following this algorithm, we save the maximum number of lives.

Millions of Americans are already at triage level red. These include 150,000 Americans per month who would have had a new cancer detected through routine screening that hasn’t happened, millions who have missed routine dental care to fix problems strongly linked to heart disease/death and preventable cases of stroke, heart attack, and child abuse. Suicide hotline phone calls have increased 600%.

That’s one silver lining of this, the State has become so eager to contact trace that they forgot about child indoctrination.

Hundreds of millions are at triage level green. These are people who currently are solvent, but at risk should economic conditions worsen. Poverty and financial uncertainty is closely linked to poor health.

A continued shutdown means hundreds of millions of Americans will downgrade a level. The following are real examples from our practices.

Patient E.S. is a mother with two children whose office job was reduced to part time and whose husband was furloughed. The father is drinking more, the mother is depressed and not managing her diabetes well, and the children are barely doing any schoolwork.

The latter being GOOD for the childrens’ health. Establishment drones gonna Establishment. But yes, that’s a family at risk of falling apart if Wifey is not exceptionally well-behaved. Ordinary men did not need this lockdown undermining their value even more than usual.

Patient A.F. has chronic but previously stable health conditions. Her elective hip replacement was delayed, which caused her to become nearly sedentary, resulting in a pulmonary embolism in April.

Patient R.T. is an elderly nursing home patient, who had a small stroke in early March but was expected to make a nearly complete recovery. Since the shutdown, he has had no physical or speech therapy, and no visitors. He has lost weight, and is deteriorating rather than making progress.

We are alarmed at what appears to be the lack of consideration for the future health of our patients. The downstream health effects of deteriorating a level are being massively under-estimated and under-reported. This is an order of magnitude error.

It is impossible to overstate the short, medium, and long-term harm to people’s health with a continued shutdown. Losing a job is one of life’s most stressful events, and the effect on a person’s health is not lessened because it also has happened to 30 million other people. Keeping schools and universities closed is incalculably detrimental for children, teenagers, and young adults for decades to come.

Please stop complaining that the State is losing control of child indoctrination. It’s not the health threat that forcibly delayed medical care and enforced social isolation is.

But it does serve to show that even socialist-minded people are having severe concerns with this lockdown. Welcome to the Red Pill, sorry it had to be a suppository. Please don’t relapse when this is over.

The millions of casualties of a continued shutdown will be hiding in plain sight, but they will be called alcoholism, homelessness, suicide, heart attack, stroke, or kidney failure. In youths it will be called financial instability, unemployment, despair, drug addiction, unplanned pregnancies, poverty, and abuse.

Because the harm is diffuse, there are those who hold that it does not exist.

Worse, there are people who profit from the ruination of innocents. Looking at you, Christian clergy. So eager to pick up the pieces of broken lives. So callous to the idea of preventing lives from being broken in the first place.

We, the undersigned, know otherwise. Please let us know if we may be of assistance.

U.S. emergency rooms are seeing about half as many heart attack patients as usual — and researchers suspect the new coronavirus is the reason why.

It’s not that fewer people are having heart attacks, doctors say. Rather, it’s fear of getting COVID-19 keeping people from hospitals.

And the consequences can be deadly.

“I’m certainly not convinced that the true rate of heart attacks going down explains even a large part of this finding,” said lead researcher Dr. Matthew Solomon, a cardiologist at Kaiser Permanente in Oakland, Calif.

“We definitely think it has something to do with the public’s response and fear about coming to the hospital and getting infected,” he said.

Solomon noted that after other major events, such as 9/11 and earthquakes, the rate of heart attacks went up.

“We know there’s a lot of public anxiety and stress and fear, and those things themselves could potentially be causing a higher rate of heart attack,” Solomon said.

“There are also a lot of reports that the emergency medical services are finding higher rates of death at home, and we worry that a good portion of those could be patients having heart attacks and strokes who did not seek care,” he added.

You told them they’d be Safer-At-Home, remember?

For the study, Solomon and his colleagues used data from Kaiser Permanente Northern California, a health care plan that includes more than 4.4 million patients. They compared the weekly rates of ER treatment for heart attacks before and after March 4, the date of the first death from COVID-19 in northern California.

Looking at records from Jan. 1 through April 14, they found that the weekly rate of hospitalization for heart attacks dropped 48 percent during the coronavirus period.

Wow. But it’s possible that, again, the hospitals were simply paid to code them as CHINA-19.

Moreover, fewer people with preexisting heart disease or prior heart attack went to the emergency room during the COVID weeks of March 4 through April 14, compared to the pre-COVID time frame, the researchers found.

Okay then, it’s NOT possible this is simply false coding if admissions were also down.

A similar decrease for the COVID period was seen when the researchers looked at the same weekly periods in 2019.

People should not be afraid to go to hospitals, Solomon said.

“Hospitals might be one of the safest places in America right now, compared to the grocery store and other places,” said researcher Dr. Alan Go, director of comprehensive clinical research at Kaiser Permanente.

No, the grocery was safer than the hospital even in good times. People don’t go to the grocery to die.

“There are some reports that find that transmission of COVID within our hospitals is incredibly low,” he said.

Anyone with symptoms of a heart attack or stroke should call 911, just as they would in normal times, Solomon said.

Dr. Gregg Fonarow, director of the Ahmanson-University of California, Los Angeles Cardiomyopathy Center, said this phenomenon is occurring across the country.

“There have been a number of recent reports suggesting that during the COVID-19 pandemic, there has been a significant decrease in the number of patients presenting to the hospital with acute cardiovascular conditions, including heart attacks and stroke,” said Fonarow, who wasn’t part of the study.

The findings further raise concerns that people with serious cardiovascular conditions are not seeking necessary care, and this may be contributing to the increase in cardiac arrest and deaths at home, he said.

It appears some people are delaying calling 911 and suffering fatal consequences in their home, Fonarow said.

Fauci and Birx care about HIV. They don’t care about strokes and coronaries.

“It is critical for any individual who thinks they may be having a heart attack or stroke to call 911 at the first signs or symptoms. Doing this quickly can save one’s life, and emergency rooms and hospitals are safe,” he said.

The report was published May 18 in a letter in the New England Journal of Medicine.