They say the only thing a camera can’t take a picture of is itself. In that vein, former U.S. Attorney General Matthew Whitaker called on Real Americans to help Trump stay in power or else the terrorists would win. 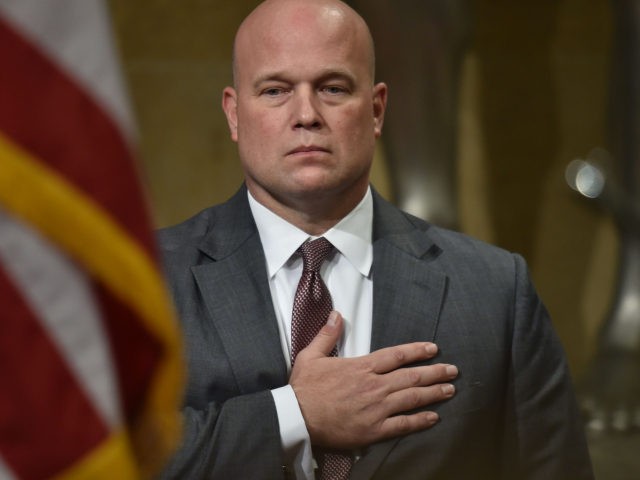 He’s a heavy guy but not a fat one. His inner face is much smaller than the outer face, indicating a thick-skinned personality.

That’s a nice patriotic pose he’s got there. Be a shame if anybody pointed out that Matt is yet another careerist prosecutor-turned-politician.

Honorable people must enroll to work in government to prevent “deep state” political corruption, determined former acting Attorney General Matthew Whitaker, author of Above the Law: The Inside Story of How the Justice Department Tried to Subvert President Trump, offering his remarks in an interview on Thursday’s edition of SiriusXM’s Breitbart News Daily with host Alex Marlow.

So many, many misses all at once. Chief among them, the delusion that government authority is accessible to honorable men. A brief consideration of how many high-level bureaucrats are Ivy League graduates should clue in the thickest skull.

As they say, if voting could make a difference then they wouldn’t let us vote. (On that note, they aren’t allowing us to vote anymore except by easily-controlled vote-by-mail.)

Whitaker defined the “deep state” as “left-leaning elitists who think they know better than the people of the United States of America,” including both elected and appointed officials, as well as bureaucrats.

That is not the Deep State. The Deep State is a government COMMUNITY, a society in its own right, that does not consider itself a part of the nation it rules. Right-leaning elitists can be cloistered members of the Deep State as easily as a college professor. POTUS Trump being the latest by-way-of-example. He’s not all bad but he simply will not, under any circumstances, cause harm to that community.

I haven’t looked at Whitaker’s background yet but let me make some guesses based on his appearance and political appointment. He’s a Harvard Law graduate, spent most of his life in the Beltway or similar neighborhoods and has a long list of past (and current) political associations including Trump’s empire pre-politics. For the bonus point, he got his bachelor’s degree on a sports scholarship.

Matthew George Whitaker is an American lawyer and politician who served as the acting United States Attorney General from November 7, 2018, to February 14, 2019. He was appointed to that position by President Donald Trump after Jeff Sessions resigned at Trump’s request. Whitaker had previously served as Chief of Staff to Sessions from October 2017 to November 2018.

Snagged the bonus! But his graduated from an Iowa law school. Not Ivy League.

Iowa Senator Chuck Grassley recommended Whitaker as one of three attorneys suggested to President George W. Bush for the position of United States Attorney for the Southern District of Iowa. In February 2004, Bush nominated Whitaker to the position.

Grassley was Whitaker’s political mentor, not Trump. I was off but not by much.

In 2002, Whitaker was the candidate of the Republican Party for Treasurer of Iowa. From 2004 to 2009, he served as the United States Attorney for the Southern District of Iowa, where he was known for aggressively prosecuting drug traffickers. Whitaker ran in the 2014 Iowa Republican primary for the United States Senate. He later wrote opinion pieces and appeared on talk-radio shows and cable news as the executive director of the Foundation for Accountability and Civic Trust (FACT), a conservative advocacy group.

From 2009 to 2017, Whitaker was a managing partner of the small general practice law firm Whitaker Hagenow & Gustoff LLP

He’d been in politics for fifteen years prior to interim USAG, flipping between public and private duties, and now is associated with a think tank. That’s exactly the Deep State life script. Score!

You know what isn’t Deep State Life Script? A career that’s incompatible with regular interruptions for government service. Trump could have Drained the Swamp simply by not allowing employees time off to run for election.

For four months, from June to September 2017, Whitaker was a CNN contributor.

Oh come on, dude. Talk about working for the other team. It was a short stay but this indicates how much of an insider he was.

So, yeah. I got a couple details wrong but the gist of it right. Whitaker’s history is textbook Deep State. His entire career has been ruling over people or at least telling them what to think, he had friends who helped him out when he was between political appointments and he was accepted even in the ranks of lefty Deep Staters.

Like a camera, Matt is not going to know what the Deep State looks like without a mirror. His politics are generally pro-Christian but that doesn’t change the fact that he’s a member of an incredibly insular Cloud community.

Does he share his community’s scorn for Dirt People?

Americans must not surrender the government’s apparatus to the left, Whitaker warned. He highlighted Democrats’ and the broader left’s character assassination campaigns against Justice Brett Kavanaugh and President Donald Trump as attempts to intimidate dissidents from entering public service.

Yeeeep. Blame the victim, how original. “You followers should lead your leaders better!”

Remember the Tea Party movement? The Contract With America? There have been grassroot uprisings several times in the last couple decades. Every single one was betrayed by the (right-wing) politicians it trusted.

How am I supposed to pity either of the individuals he names? Kavanaugh went through Hell fighting off the feminists then once confirmed, proudly assembled an all-female support staff. And Trump? Every chance he got to Drain the Swamp, he took a dive. He styled himself as Mister Make America Great Again then when the stock market took a long-delayed, well-deserved hit, joined with Newsom, Pelosi & Friends to print… what is it now, five trillion new dollars so the Community of Cloud People would remain unaffected by reality?

Honorable men don’t need to champion Trump so he can take yet another dive for not-our-people. Honorable men need to nuke Whitaker’s entire community from orbit, both the Left and Right sides of it, and we need to do it fast because tomorrow is a workday and we Dirt People gotta make payroll.

“Good people have to raise their hand and volunteer to participate [in government],” advised Whitaker. “So many of these folks in our federal government are from the coast.”

Good people are not allowed in government. Whitaker had Senator Grassley to invite him in. Who will give Gunner Q a seat at the inner table of politics? Especially when I’m not going to first prove my loyalty with a law school credential then kowtowing to the community’s leaders.

I just had a flashback to why I don’t go to church any longer. The inner circle of Churchianity didn’t want a man who wanted to rock the boat and hadn’t earned the proper credentials from the proper people.

“Coastal elitism” will be the dominant worldview in government if non-leftists abstain from government jobs, cautioned Whitaker.

Matt is not thinking outside the box. He IS the box. He’s the very coastal elitist that he pretends to disparage. Even in Iowa, he was a coastal! Like Surf City, it’s an attitude not a place.

Whitaker stated, “If we don’t get the ordinary, regular people from flyover country [to] show up and do the work and enthusiastically take on these roles, then we’re gonna be in real trouble,” added Whitaker.

Flyover country. That motherfucker unironically used the term “flyover country”. It’s nice that he opposes the homopedo faction but what he doesn’t do is consider himself an ordinary, regular person like us.

He’s an insider. A made man. Who currently needs free labor to help his faction through a rough spot. Free labor from the people he refused to help when he had the chances.

Whitaker added, “We can’t be deterred by what happens to people like Kavanaugh and Trump and myself. We have to continue to fight [to] really advance the agenda that is good not only for America, but is going to sustain our republic into future generations.”

Widespread news media denial of the existence of a “deep state” is rooted in their merger with an entrenched bureaucracy, explained Whitaker. Those of the “deep state” are “confederates with the media,” he added.

“And I never liked my CNN coworkers!”

Whitaker reflected on the reflexive hostility directed at President Donald Trump from much of the news media.

“What I learned [as interim attorney general] is that anything that is in favor of or supportive of President Trump, the media and others believe it must be destroyed. That was pretty clear to me in the first three days. … I could not believe, even though I had seen it with my own eyes up at that point … the backbiting and leaking, how pervasive that was, and how you could not have a meeting with more than about two people before the content of that meeting somehow leaked out to the Washington Post or New York Times.”

Trump Derangement Syndrome is indeed frustrating. There are many legit reasons to oppose Trump but the Lefties use such absurd reasons as Russiagate that one ends up defending a turncoat. Trump and his enemies live on opposite sides of a very exclusive community, one that… like a rancher… does not want to be on a first-name basis with the livestock. Let alone share the livestock’s fate.

On the bright side, the livestock are finally getting nervous about those cattle cars that keep showing up to lead them into a better place.

One thought on “Deep State Sees No Deep State”