Today, I should blog on the the World Health Organization using Vedic Yoga to contact-trace Chinavirus. *Gunner looks out the window.* Screw that, it’s too nice outside. BEACH TRIP! 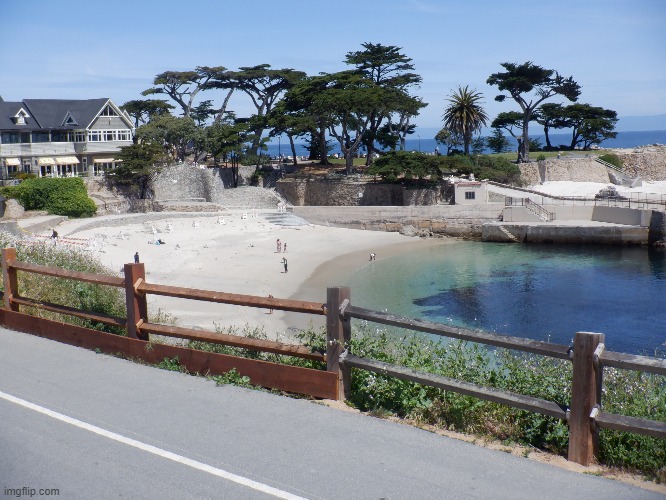 Lover’s Point in Monterey County is one of my favorite snorkeling spots. The area is better protected from Pacific Ocean currents than Santa Cruz and just far enough from the tourist traps that it’s usually not too crowded. It’s worth a drive to enjoy kelp forests that are literally waist-deep, which are the black stuff you see in the water. 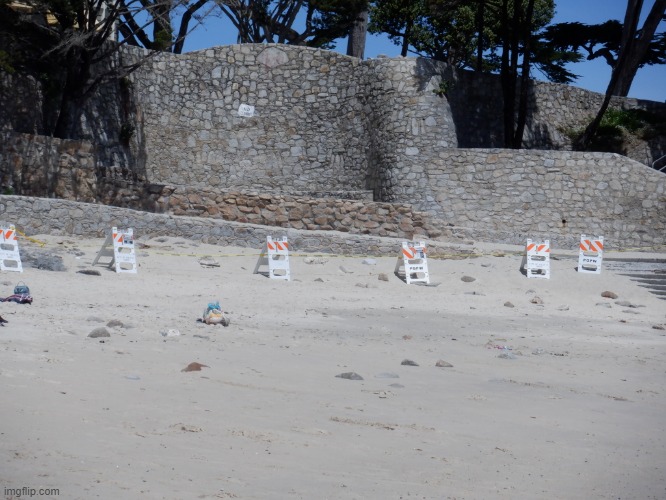 The beach was open for ocean access but closed for actual fun. Between that and no SCUBA shops open, this was a purely snorkeling trip. Which made the “waist-deep” kelp forest the reason I chose here. 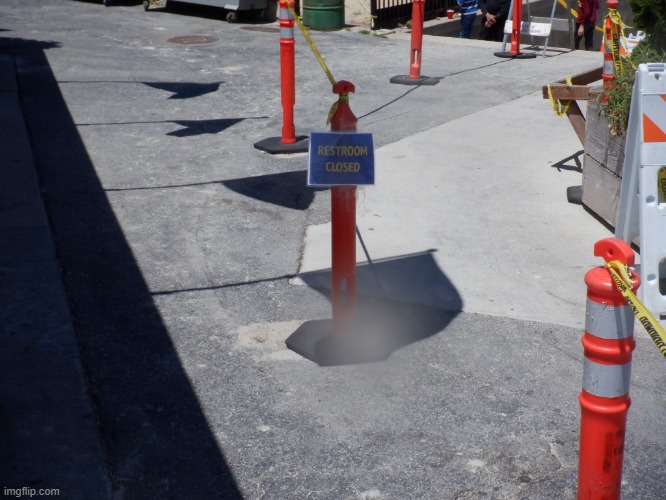 No restrooms? No problem. I’ll just do what fish do in the water: everything.

Also, the barricades were set up to create one-way lanes to and from the beach, which I thought was an effective intelligence test. Did you know that coronaviruses, like Australians, only drive on the left side? No? Then you’re normal. 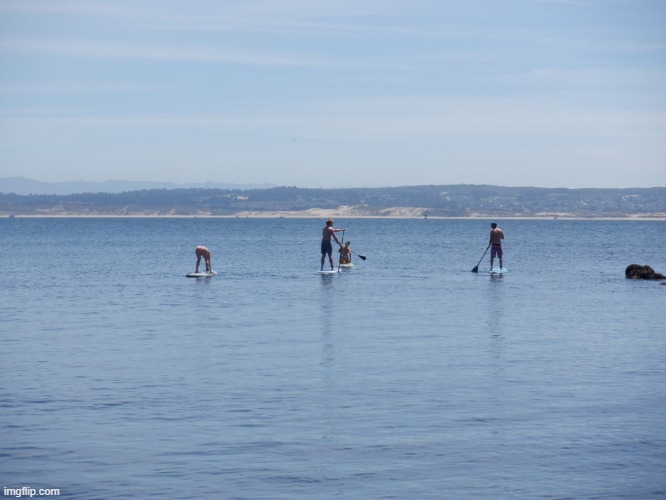 The family that paddleboards together, stays together. Excepting the chick on the left who wore a thong bikini then dropped her soap. I did not intend that when I took this picture; I simply wanted to show the only normal family to take advantage of gorgeous California summer weather. But I don’t have a backup pic to offer. 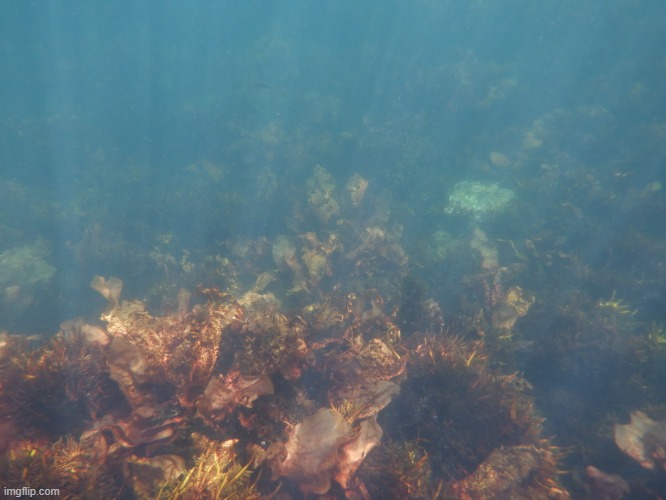 In we go! This was midday at low tide, which I’d hoped would provide best visibility. 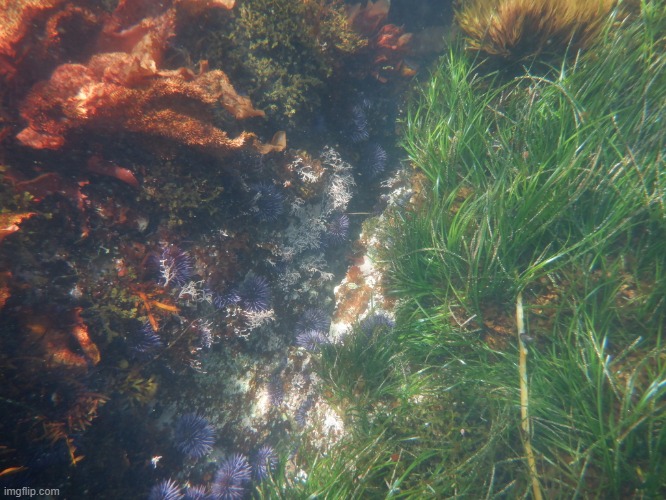 Orange kelp, green sea grass and purple sea urchins. The latter are a favorite food of sea otters and starfish. 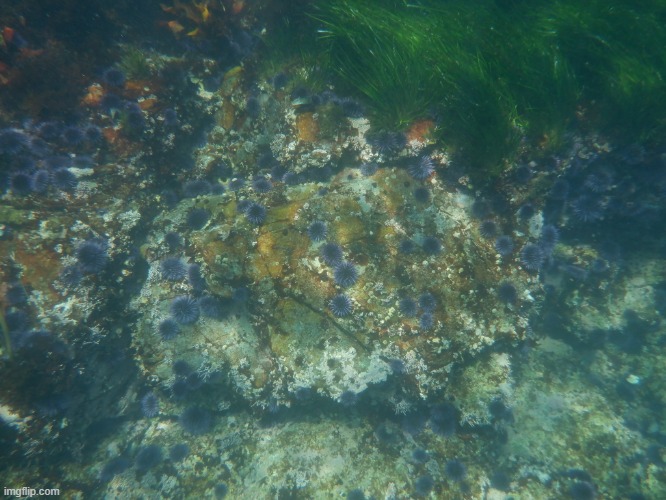 Lots of purple sea urchins. There were a lot of starfish preying on them the last time I was here but not this time. 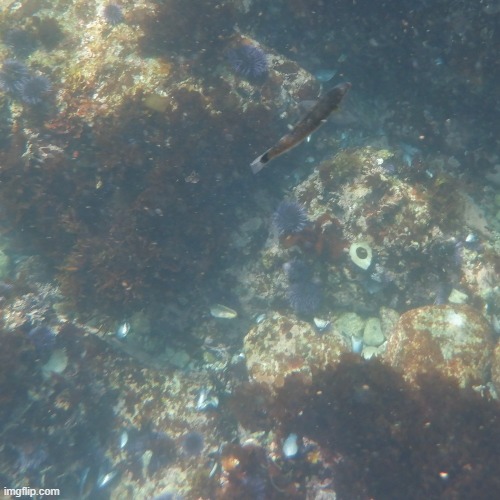 Hello, little fish! Lots of fry today but they don’t show up on camera and do keep to the kelp to avoid predators. The bigger ones kept following me, though. 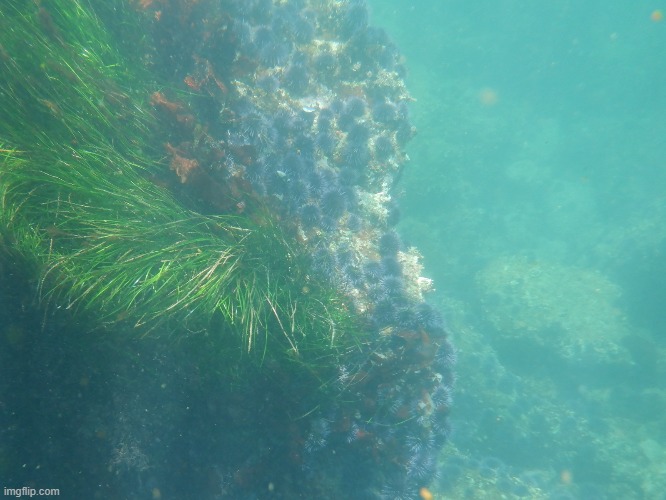 One usually needs SCUBA gear to enjoy seacliffs like this one. 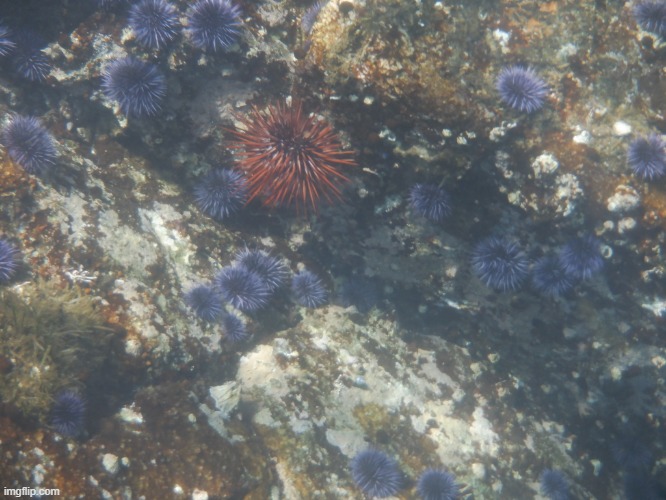 MUTANT! Actually, the red sea urchin was commercially viable to the point of being overfished like the Monterey sardines. I would have a lot more respect for environmentalists if only they would do their thing in the name of human welfare. It is not good to treat bugs like people and people like bugs… which is not to say that bugs can’t be important to human welfare and enjoyment. 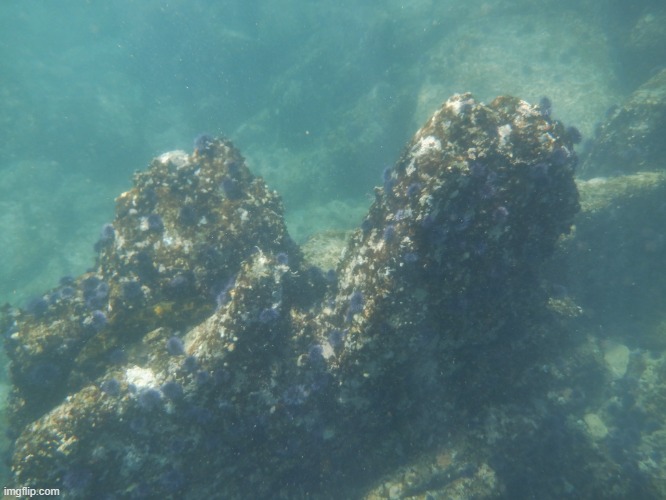 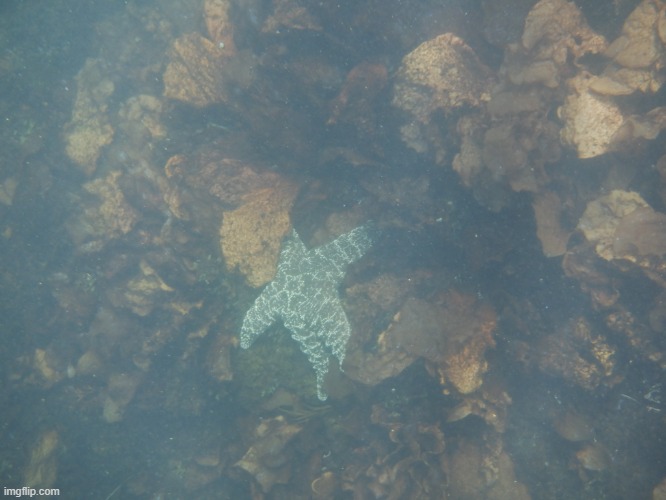 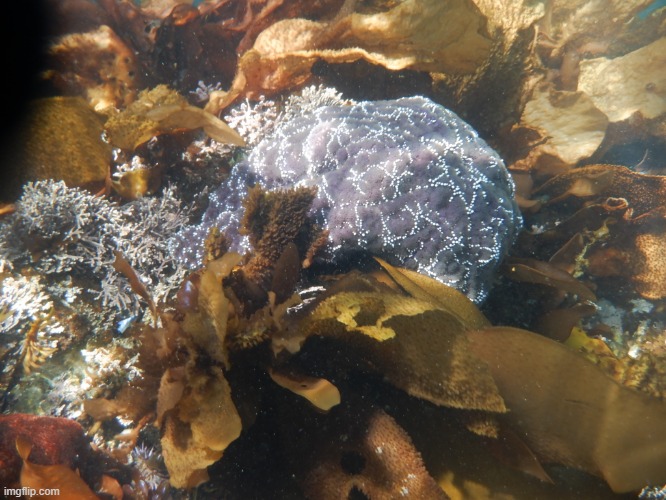 This starfish has grabbed onto an urchin and is prying it open. I wonder if one could be trained to open jars? 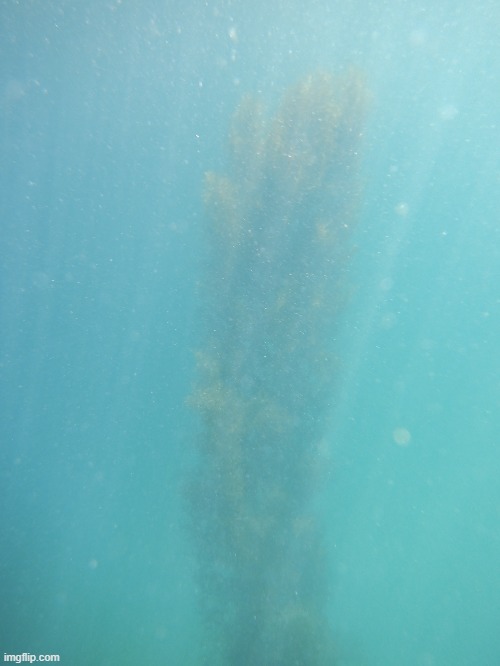 The kelp forest wasn’t as big as last time, either. It took some swimming to reach the bigger plants. 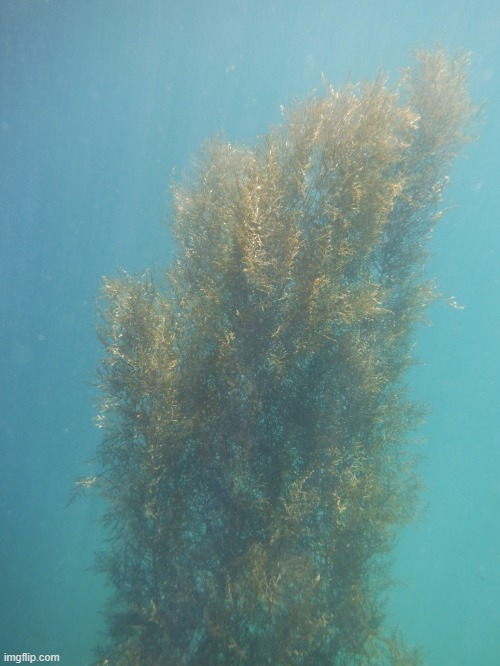 Closer. Swimming through a kelp forest is like effortlessly flying through a tree-forest, but you need SCUBA to get the full effect. I was wearing so much neoprene to stay warm in this water that I couldn’t even freedive without a weight belt, which would have made swimming unpleasant.

All these pictures were taken just a foot or two below the surface. Ain’t many places you can do that with results this good. 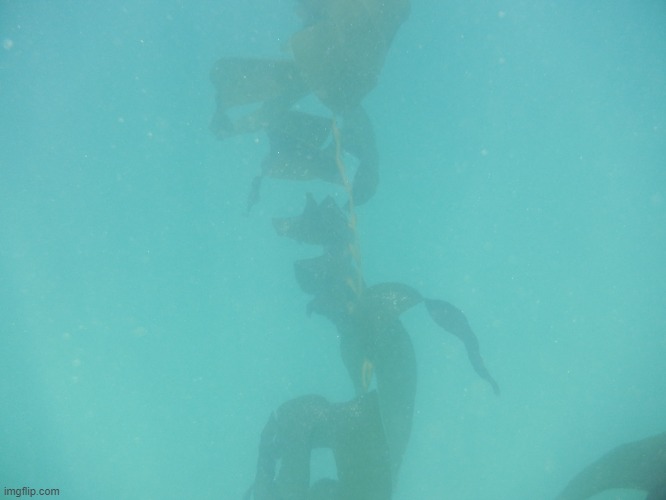 It was hard to get a good picture of the kelp because at low tide, the upper portions lie flat along the surface and blot out the light. Kelp is naturally buoyant; otherwise, it would lie along the ground like a vine. 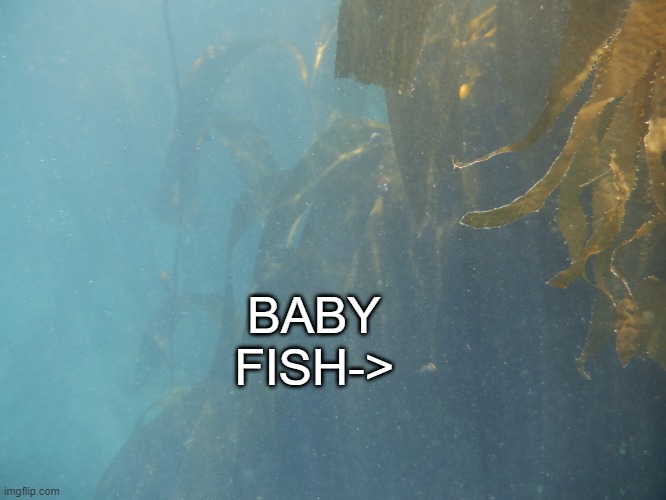 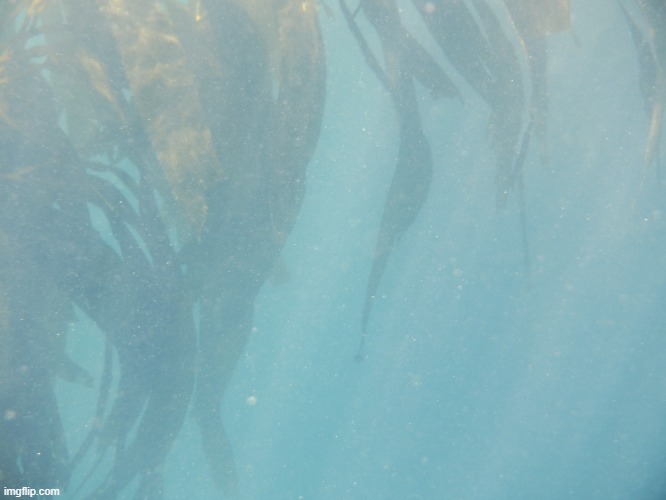 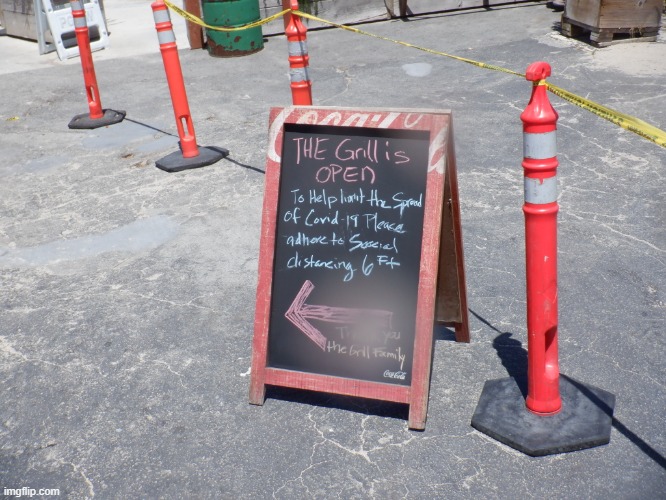 Inevitably, I got hungry. Inevitably, their concern for the welfare of tourists didn’t extend to reasonable prices. But what can I say, I supported the economy.

Screw our politicians for locking us indoors but worse than that is too many people not feeling the need to DO STUFF. There have never been more ways to enjoy nature in comfort yet most ‘Muricans are content to sit on their asses. Maybe the reason people don’t resist the lockdown is they don’t know what they’re missing outdoors?