Let’s read the title and just drink it in for a moment:

In the Manosphere, “Alpha” means you’re sexy to women. It does not mean you’re a decent human being, in fact, there’s a strongly negative correlation. Just from the headline, I’ll guess that 1. the perp has a suspended driving license, 2. does not use his father’s last name and 3. has prior arrests for hard drugs.

Florida man is accused of drugging and raping a woman, burning her hair and holding scissors to her throat after picking her up in a van that his mom was driving.

According to the Marion County Sheriff’s Office, 29-year-old Efthimios Michael Zachary Mikedis, known as Zak, was arrested on April 29 and charged with crimes that happened on January 5. 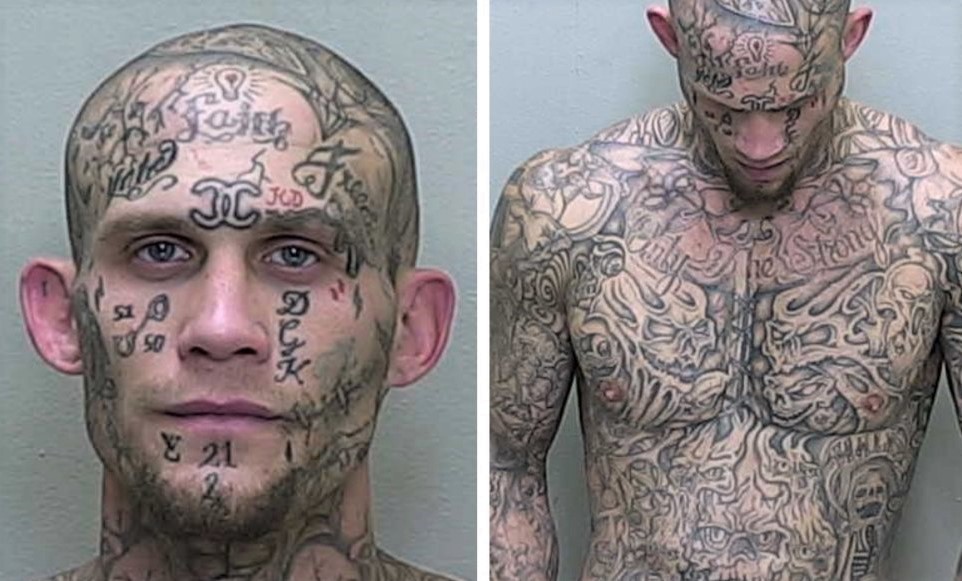 WHAT THE HELL?! It’s not often that a physiognomist can literally read a man’s face. I’m not up-to-speed on tattoo symbology but the two teardrops next to the canthus of his left eye indicate he’s killed two people. He needs a dermatologist, not a physiognomist. One with a very powerful laser.

Incels rage because Zak is what qualifies as sexy in modern ‘Murica.

On January 10 Orlando police responded to a local emergency room, where the victim reported the crime. According to a Facebook post by the Marion County Sheriff’s Office in Central Florida, the woman said Mikedis offered her a ride from Orlando to her aunt’s house in nearby Marion County. The arrest report says that Mikedis and the woman met on Facebook after the woman’s aunt introduced them via the social media network.

It’s hard to believe the victim was never shown a selfie of Zak. He looks like trouble from EVERY angle! But sadly, it is very easy to believe that the victim saw no problem with climbing into the vehicle of total strangers.

I am very curious about the unnamed woman’s aunt, who sent Zak to pick her up. No info to be found, of course, but this was betrayal by a family member… much worse than a “Titanic” romance.

Mikedis arrived in a van with a friend, and Mikedis’ mother, Shannon James, was driving. The woman told deputies that when Mikedis showed up he had a gun in his waistband and described him as “someone you would instantly be scared of.” She said she changed her mind and didn’t want to go, but according the sheriff’s office, he said she had to. She says Mikedis “forced and unknown substance into her mouth” and she was made to stay down between seats as they drove.

I like the Mosaic Law’s standard of determining whether rape was rape-rape. If she screamed and resisted then it was legit rape; if she went quietly then it was regret rape.

Lots-of-regret rape, in this care.

Instead of going to her aunt’s house, they ended up at James’ residence. Mikedis took the victim out back to a camper, and when she asked if they were going to her aunt’s house, he said, “Why don’t you just stay here?” according to deputies. At that point the woman said she started blacking out but remembers being raped by Mikedis and that a secondary object was used to violate her. She also told deputies that she remembers hearing Mikedis say, “Go, go,” and then a second person raped her.

When she came to, she tried to call an Uber, she said, but Mikedis put another unknown substance in her mouth before burning her hair with a cigarette and holding scissors to her throat, according to the Marion County Sheriff’s Office. They say he then dragged the woman across the property by her hair and punched her in the back of the head. He reportedly grabbed her hair again and forced her into a vehicle. Mikedis’ mother, James, was the driver again, and they took the woman to a Winn-Dixie supermarket, where she was made to get out of the car.

But he’s certifiably crazy so who knows. Maybe he didn’t think far enough ahead, about how recognizable his face would be in a lineup.

Marion County Court records show Mikedis has a criminal history going back to 2009 including burglaries, grand theft, dealing in stolen property and possession of methamphetamine.

I got a win on the drug-history prediction and a lose on the no-Daddy-name prediction. In fact, he does not use the name of his mother whom he lives with. Very curious.

In 2017 he was found guilty of domestic violence with strangulation. The arrest affidavit from August 2016, when the incident took place, says his on-and-off girlfriend told deputies he had been violent and controlling, but she was giving him another chance.

The girlfriend told deputies on the day of the arrest that they had been riding in a car when his roommate called and said the sheriff’s office had been at their house to do a wellness check on the girlfriend. She’d called her family for help. He pulled the car over and started beating her, according to the arrest affidavit. The beating escalated into him strangling her. She broke free and ran to a nearby motel for help. The affidavit says her injuries and bruises were consistent with her story.

When deputies caught up with Mikedis back at his home, he told them, “the victim suffered her injuries because of the lifestyle she chose,” according to the arrest report.

Sociopaths blame the victim. An unsexy man, in that situation, would have ended up a lifer in prison. Zak made parole for attempted murder in less than four years.

The Marion County Sheriff’s Office is still looking for the other man, Robert McDaniel, who was in the van when Mikedis and his mom initially picked up the victim.

Paul Bloom, the Marion County sheriff’s spokesperson, told Heavy that more charges are pending as the investigation continues. He said there isn’t enough evidence to suggest the mother had knowledge of the battery, which he said happened on the property where she lives, but since the alleged crime happened in the camper and not in the main residence it’s possible she would not have known.

Pussy pass. The mother had knowledge of her son’s felony conviction for strangling the 2016 girlfriend, yes? Then why was she driving him around to pick up more girls? Watching his 2020 girlfriend stagger out of the camper van drugged and bruised with burnt hair should have fit a very obvious pattern.

These are the voyages of the Starship Matriarchy.