This year, I didn’t even have the option to celebrate Easter in a church. While I’m more than ready to violate this stupid lockdown, I can’t because every single one of my friends and family is religiously (heh) obeying the government’s ever-more-obviously uninformed decrees. It takes two to break social distancing!

So, I decided to hike up to a cross on a remote ridge in order to celebrate Easter. It was a big, locally famous cross until it was torn down sometime around 2000. (Nobody cared enough to note exactly when.) I replaced it with  a tiny little cross made at home in civil disobedience but haven’t been back in years to see how it was doing. Why not check up on it? 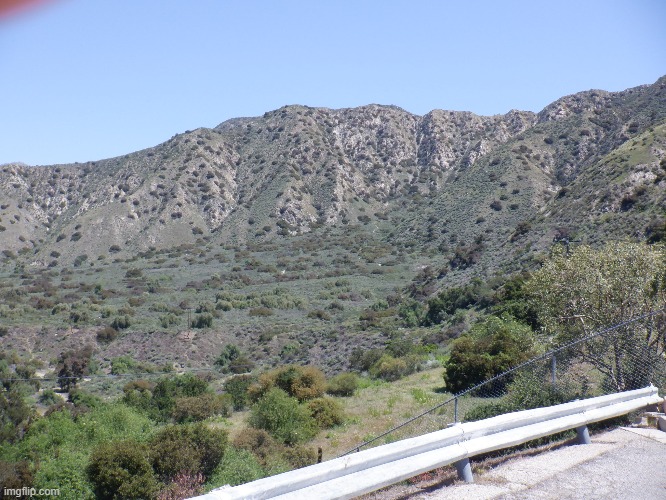 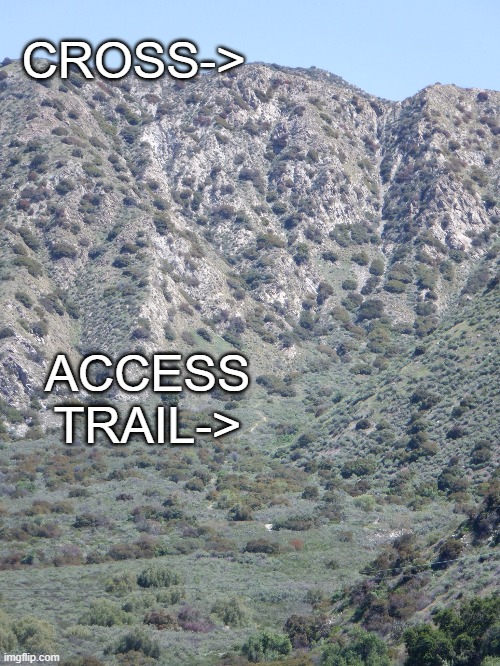 It’s a hard hike even by my standards. Notice the slope is steep enough that the topsoil slides off. This is northern Los Angeles, a great place for building world-class rock gardens. The low, dense brush is called chaparral, which I think is Spanish for either “tinder” or “no shade”, and is the very definition of drought-resistant. I’ve lost entire socks to weeds like these. 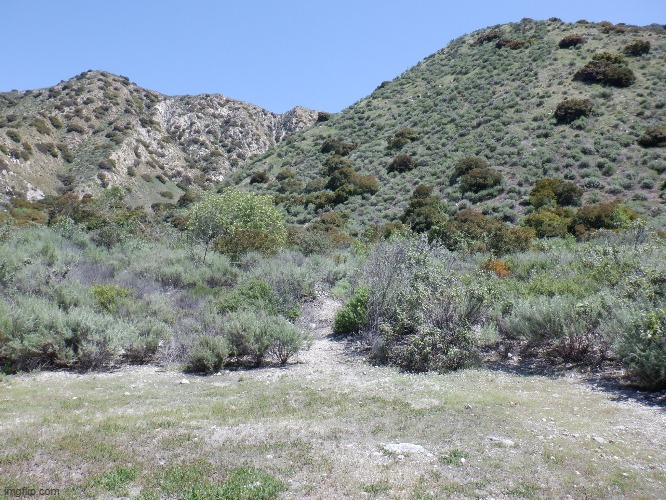 Here’s the trailhead, branching off the firebreak road! (Fifty yards later) That was not the trailhead. It was a dry creekbed too new to sprout flora. 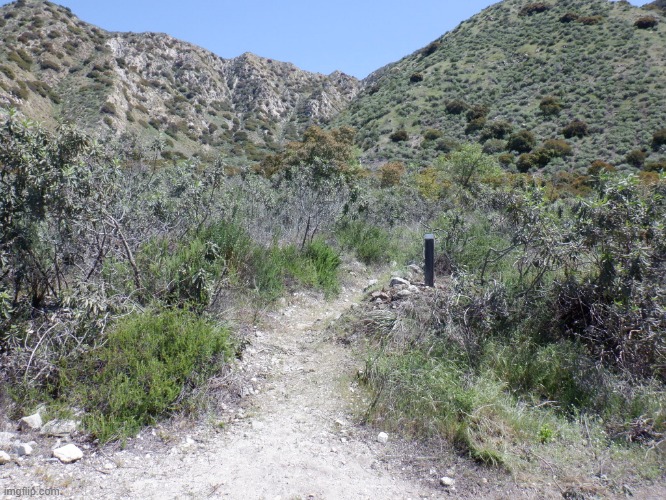 Ah, here it is. Note the remains of the trail marker on the right. Seems the trail has not been maintained in recent years. There was a prison camp nearby that used inmate labor to keep the roads and trails maintained. The camp has been closed for many years now… consistent with Los Angeles gov’t championing the plight of nice people whose lives were unfairly ruined because they made a single mistake or two. Mistakes such as carjacking, robbery and cooking meth. Things that could happen to anybody, y’know.

And yes, this is where a couple of those big fires raged out of control in recent years. Hmm. Perhaps maintaining these firebreak roads & access trails was important after all. 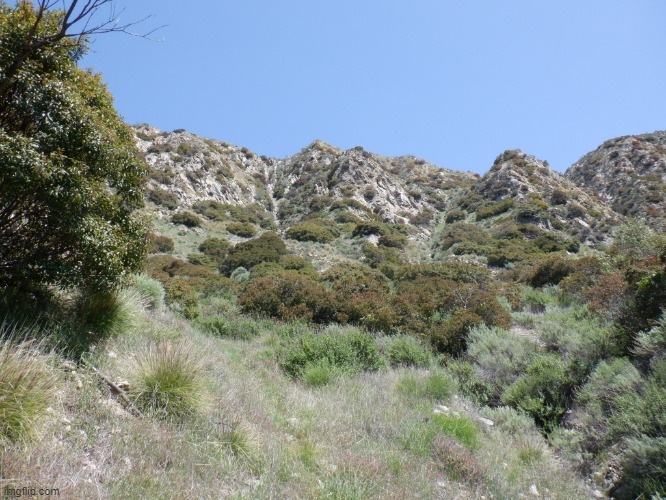 This picture was taken with the camera tilted about twenty degrees off vertical. Only a hundred yards left to go! as the rock falls. There’s no oxygen up here! 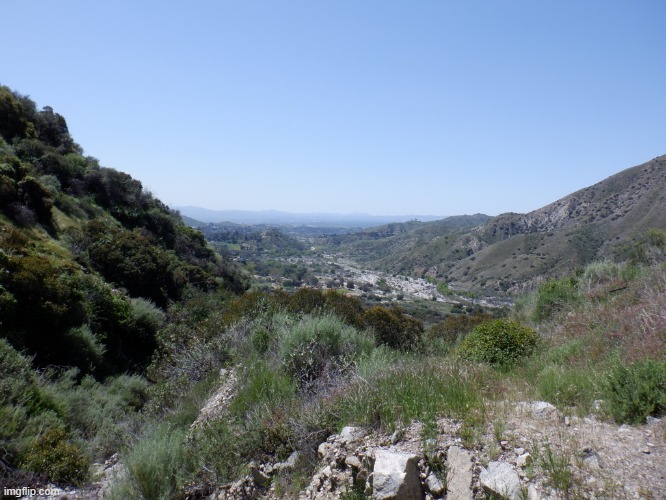 This is where I gave up. The trail petered out and my back isn’t up to scrabbling over old avalanches to get around impenetrable, tick-infested itchy brush, but I took the opportunity to snap a couple pictures of the view. 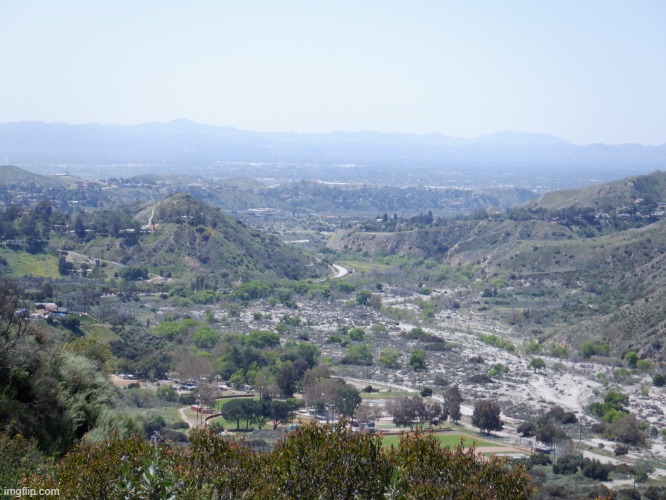 Los Angeles as seen from the Northeast. That’s not out of focus, that’s the famous Los Angeles smog. Much better than it used to be.  And this is only 2/3 up the ridge! The view is definitely worthy of a cross for honoring God. 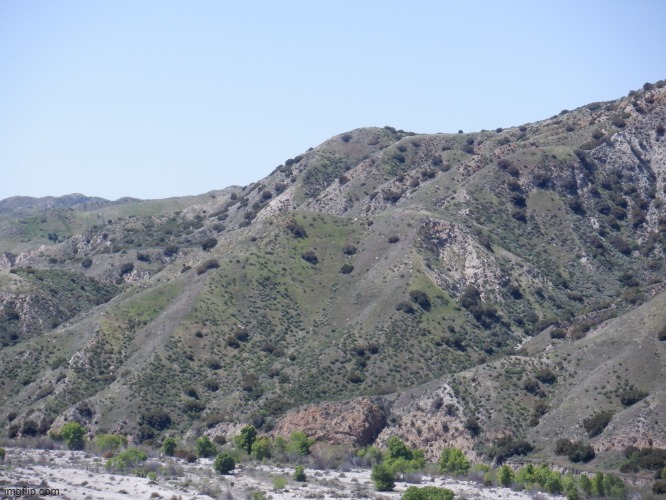 Maybe I should put a cross on that ridge instead, on the far side of the homeless-infested alluvial plain. A much gentler slope. Burns about once a year now because homeless campfires, which means much less brush to push through!

As I headed back, I passed half a dozen fellow quarantine-breakers. Every single one had a mask, turned away at my approach and did not return my greeting. It’s worrisome how completely social cohesion has broken down here. Los Angelenos are such State sheep, they wear their Chinavirus masks while driving! Because the government said to always wear a mask “outside the home”.

Screw the fatties, they don’t even want to be human beings, but it hurt to see my outdoors-loving peers have the same attitude.

If I’d worn my State-mandated cloth mask on this hike then I would have aspirated it along with all that trail dust.