How the heck did South Dakota get a bunch of Chinavirus victims? The same way Italy did.

At least 438 employees at the Sioux Falls Smithfield Foods plant tested positive for COVID-19. Another 107 people tested positive after coming into close contact with Smithfield workers. The plant accounts for between 4 to 5 percent of U.S.’s pork production, according to the company.

The 545 confirmed cases directly linked to the pork processing plant account for about 55 percent of infections in the state, with the surrounding Minnehaha and Lincoln counties most heavily affected. Out of the total 988 confirmed cases in South Dakota recorded by Wednesday, 768 cases are in Minnehaha County, where the Sioux Falls plant is located.

Three-quarters of the infected are linked to this plant. Only six dead of 1,000, meaning six people died who were reported to have Wu Flu.

On Sunday, the president and CEO of Smithfield Foods, one of the nation’s largest meat-processing companies, warned of “severe, perhaps disastrous” consequences for the country’s meat supply chain following the closure of its Sioux Falls plant.

“The closure of this facility, combined with a growing list of other protein plants that have shuttered across our industry, is pushing our country perilously close to the edge in terms of our meat supply,” Kenneth M. Sullivan, Smithfield’s CEO, said.

Gah, that boldfaced is freakish coming from a meat packing executive. Does cockroach count as “protein”?

Speaking of the leadership, guess who owns Smithfield Foods?

Shareholders of Smithfield Foods Inc. (NYSE:SFD) approved the proposed $4.7 billion sale of the Smithfield, Va.-based company to China’s largest pork producer, Shuanghui International Holdings, sealing the biggest acquisition of an American company by a Chinese firm, Smithfield said in a statement on Tuesday. More than 96 percent of the votes were in favor of the transaction, which is valued at $7.1 billion including debt, and the merger will be complete by Sept. 26.

The purchase of Smithfield, the world’s largest pork producer by Shuanghui had stirred concerns about Chinese access to U.S. intellectual property such as agricultural technology and the long-term effect of U.S. agribusiness coming under foreign control. The deal had also sparked doubts about the deal’s impact on the safety and availability of heparin — an anticoagulant derived from pig intestines — and lawmakers had expressed concerns that Smithfield, under Shuanghui’s control, may be pressured to export its crude heparin product to China instead of supplying it to U.S. companies.

“This is a great transaction for all Smithfield stakeholders, as well as for American farmers and U.S. agriculture,” Larry Pope, president and CEO of Smithfield, said in a statement.

I don’t have the demographics of the infected; more likely Latino migrant labor than Chinese; but neither do I think it’s a coincidence that a China-operated meat packing plant turned out to be a hotbed of China-spawned disease. 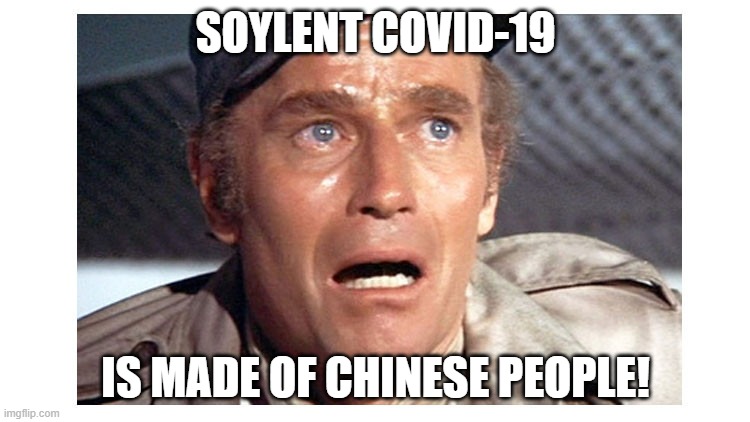 But the real crime here is me, a white man, being rayciss and ultra-nationalist.

Smithfield’s association with Spanish packaged meat company Campofrio, in which Smithfield holds a 37 percent stake, remains undecided, as Shuanghui can either buy the remaining stake in Campofrio or reduce its stake to less than 30 percent, Reuters reported.

The Committee on Foreign Investment in the United States, an executive panel that examines foreign investment for potential threats to national security and clears investment proposals within 30 days, approved the deal on Sept. 6 after subjecting it to an additional 45-day scrutiny.

Per Wikipedia, Shanghui Group, aka Shineway Group and WH Group, is currently the largest pork producer in the world. That probably does not include America’s Congress but since it signed off on this blatantly anti-American business deal, maybe it does.