Bonus: A snowflake explains why feminists hoarded toilet paper for the Wuhan Whoop!

A monastery taught her the importance of toilet paper? Seriously?

The monastery is in India… oh. Ohhhh.

When I told my Jewish, slightly over-protective, hyper-logical mother that I had decided to spend my college semester abroad learning to meditate at a Buddhist monastery in India, her concerns, comments and questions were as follows ― numerically ordered to indicate her level of worry:

What if you decide to convert to Buddhism and stop being a Jew?

What if my grandchildren aren’t Jewish because you’re now a Buddhist and no longer a Jew?

If your beliefs can’t survive contact with foreign beliefs then you’re less a believer than a hostage with Stockholm Syndrome.

How are you going to manage your anxiety?

Why wouldn’t you just go to France, where you speak the language?

Why can’t you meditate in America?

What will you do if you get sick?

Is this really necessary?

How often can you call home?

And most importantly, do they have toilet paper?

A father would have asked: why are you paying college tuition to be voluntarily locked inside a jail cell in one of the most unhygenic nations on Earth? You threw a fit the last time I sent you to your room.

My reasoning behind the choice to spend my semester abroad this way had been less linear ― more driven by gut and curiosity than by the constant ping-pong of “what ifs” that lives inside my brain during most waking hours.

As I sat in the dean’s office finishing my final registration papers and second-guessing myself into going to Paris or Dublin instead, something in me signed on the dotted line faster than my brain could tell my pen to halt. When else am I going to get a chance to live in a Buddhist monastery in the northeast of India with 36 other college kids trying to figure out what life is all about?

I’ll guess her life was about getting lots and lots of exotic dick at her trust fund’s expense. What was her degree in, anyway? Womens’ Studies? That explains a semester in a monastery even less. Maybe if it had been a convent… OUCH! My brain blew a fuse imagining that one!

I wish I could tell you that it proved the most magical three months of my life. That I came back glowing, lighter, relieved of my neuroses and a fan of curry. That I ate and that I prayed and that I loved. That meditation stilled me and cleared the gunk. But that isn’t the truth.

Hmm. Eat… Pray… Love… where have I seen that before?

Instead, I found myself face-to-face with my own anxiety ― with my fear of uncertainty, with my attachment to material comfort, with my shaky sense of self, with my inability to sit still, and with the ways I didn’t like myself.

Yes, Stella, that’s what meditation in a remote location is supposed to do: force you to confront yourself with no escape. Force you to face and overcome your flesh. Even Scripture teaches that a man who controls his emotions is stronger than a king who conquers a city.

The months I spent in India left me unhinged and dismantled.

So much so that I had to come back to the U.S. three weeks earlier than the rest of the group, my insomnia and panic attacks making it impossible for me to continue to the independent study part of the program.

It turns out, as many have said, this is exactly what’s supposed to happen on a spiritual pilgrimage to India. 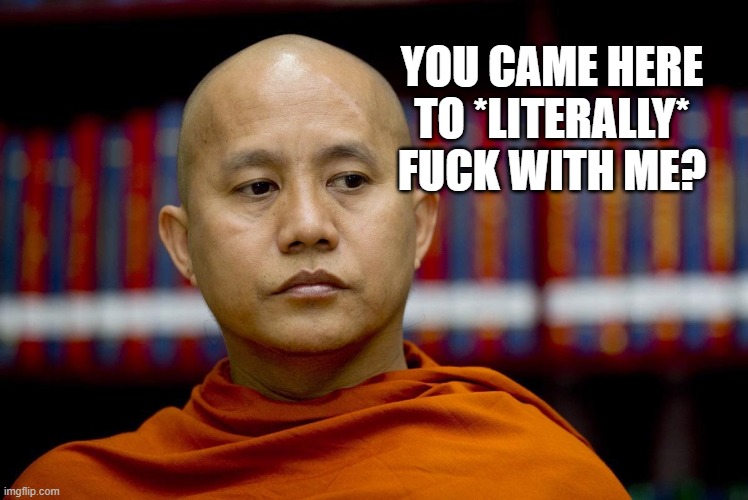 Here’s a big salute to those Indian Buddhists. They locked down that shipment of Spring Breakers so hard that Slutwalk Stella couldn’t get her groove on.

Your states of mind are reflected back to you more loudly than you can bear to see them. And you can’t look away. It makes you raw, pulls off a layer of your skin. The impulse to let the layer grow back is almost a compulsive urge. But they tell you not to let it grow back. They tell you to let yourself stay exposed and vulnerable. They say this is how you learn to tolerate yourself. And then eventually, love yourself.

“Clearly,” I thought, “these people have never suffered from an anxiety disorder.”

Clearly, Stella didn’t understand Buddhism any more than she understood the concept of “monastery”.

At the monastery, we lived like monks ― no phone, no computer, no TV. We were each given one plate, one spoon, one fork and one knife, which we had to wash after every meal and bring with us to the next one. We followed the five Buddhist precepts, which I am certain were not created with angsty college kids in mind ― no alcohol, no sex, no gossip, no stealing and no killing (this one was the least difficult to abide by, though the mosquitos were incessant).

Slutwalk Stella going to a remote monastery in a foreign land was surprised that drunken sex is not permitted and the Wi-fi is horrible. Shoulda done Paris instead!

Wait, was she not allowed to kill the mosquitoes?

Despite the early bedtime, the days felt endless. Aside from the basic tasks of daily living, there was nothing to really do at the monastery. Nothing to plan or schedule or scroll through ― the concept of productivity rendered almost entirely obsolete. The days seemed tranquil and cozy and pleasant. My brain, on the other hand? Not so much.

Do not speak of productivity, feral female. You are not worthy.

I can’t help but see parallels between my time in the monastery and the quarantine we find ourselves in now ― the toilet paper is scarce, it’s unclear when one day ends and another begins, and my anxiety is once again by my side, begging for attention.

Feminists hoarded toilet paper for Kung Flu because the last time she went through quarantine, it was in a cesspit Third World country during an attempt at the Eat Pray Love lifestyle!

This time is not voluntary, but in many ways, it is an opening. For those of us who are being forced to spend more time alone, this is an opportunity to go inward, to get quiet, to get intimate with our own, often unruly, minds.

Although I am living at home with my mom…

…being with my own thoughts this closely, for this many days, can be excruciatingly uncomfortable. In some moments of antsiness and boredom and low self-esteem, I would rather do anything other than sit here. I want to grab for things I am convinced can make the loneliness better ― productivity which leads to validation from others, busyness which keeps me moving just fast enough so I don’t have to acknowledge that I feel sad, scheduling back-to-back virtual hangouts so I can quell the small voice inside that tells me that people don’t like me.

Nobody likes you, Liana, especially the Buddhist monks when they realized you thought their monastery was Motel Sex As Seen On TV. If there’s one person this world doesn’t need, it’s a Jewish princess raised by a single mother to whine about her insecurities on HuffPo.

But thanks for the freak show. As you’ve discovered, entertainment helps make quarantine bearable.

When I left India, I had a sense that it was a gift that my crutches and coping mechanisms were not available to me. Even in these difficult moments, I feel the same gratitude for this quarantine. I have no choice but to self-soothe instead of relying on external fixes. I am infusing my heart with courage as I practice tolerating my uncomfortable and unpleasant emotions without numbing them, escaping from them or distracting myself.

The women who submit to a husband don’t have to self-soothe. They have a man who will care for them in hard times. I might be out of work but here’s a fact, I have no intention of starving.

Every morning, I’ve been rereading something one of the monks told me after evening meditation ― “Hardship is the greater of the two blessings. The purifying rather than the blissful, insightful ones that we all like. The ones that make it so hard you want to run away are perhaps the blessings we are all waiting for ― the ones we don’t want, but really need.”

Christians have a high regard for Buddhists because we both agree that controlling oneself is of great importance, as is patient endurance in suffering. Unlike Buddhism, we do it to resist a world that has gone wrong rather than to make peace with it.

At the monastery, the idea that there was nowhere to go completely terrified me. In quarantine, I am working to see it as a gentle reminder that I am good enough as I am, that this moment is good enough as it is, and that I am right where I am supposed to be. “There’s no rush, sweetheart. You’re OK and safe right here,” I whisper to myself when the restlessness overtakes me.

Liana has all the money that money can buy, but she can’t be complete on her own because God did not design her for that.

2 thoughts on “How Stella Didn’t Get Her Groove Back”