I’d do more book reviews if I didn’t have to purchase the books. So few of them live up to my unreasonably high standards of “no feminism, moral relativity or necrophilia” that I only want to buy it after I’ve proofed it like a commissar. Obviously not an effective business model. 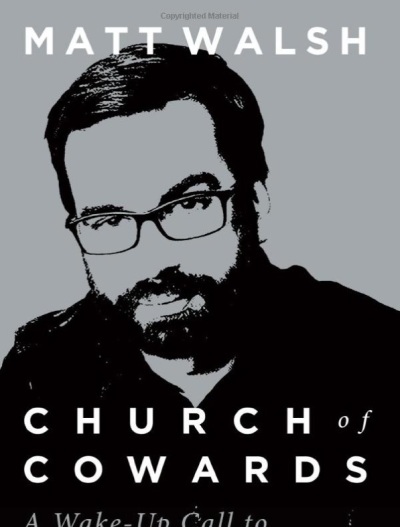 Provocative. Accurate, as far as the title goes. But Walsh is one of those pundits who like a groundhog, notices the problems in modern society then retreats into his Narrative-approved burrow. Which makes him either a very bad choice or a very good choice for writing a book on cowardice.

Ahh, a journalist with a name that sounds Norte Americano. He even spells it correctly! There’s my unreasonably high standards again.

Conservative Christian commentator Matt Walsh is condemning complacent Christians in America, saying that, in some cases, Christians are called to be intolerant.

Nothing is more intolerant than truth. This world offers ten million lies but only one truth. We’ll tolerantly let you go to Hell if you reject the truth of Christ, up to the point where you do evil upon innocents. Ideally speaking.

Walsh, a nationally known podcast host and writer for the conservative online website The Daily Wire, is warning that many Christians in America today are constructing their own religion based on cherrypicked ideas from the Bible that support their agenda of tolerance and inclusion.

The last thousand warnings didn’t work but this time, the warning is being given by a pundit with a beard! You know his advice is valuable because you have to buy his book to get it!

He told The Christian Post that the book offers his “diagnosis of the problem that most Christians recognize in our culture.”

“If you look at the statistics, we know that the number of Christians is declining while the number of secular atheists is going up,” Walsh told CP in a recent phone interview.

“I think we also know that the problem is even worse than the numbers suggest. If you were to talk to the professed Christians [in the U.S.], a startling percentage of them don’t actually believe in some of the essential doctrines of the Christian faith.”

Chino isn’t just a backwater city in California. “CHristians In Name Only”.

A 2017 survey from the American Culture and Faith Institute shows that only about one in 10 Americans hold a biblical worldview even though nearly half of them claim to lead a Christian life. Among millennials, only four percent have a biblical worldview.

Thus far, preaching to the choir. But it’s not enough to talk about statistics and concepts. Does Walsh dare to use the deplorable word, “Evil”?

Various factors can play a role in a person’s faith and worldview formation. According to Walsh, those include parents, the church, education and culture.

Christians do not have a worldview. We have a God, a real one. THE real one.

“And that’s a problem because the culture itself is so aggressively hostile to Christian faith and very determined to, especially with kids, convert them into secularism and relativism,” Walsh argued.

Evil, Walsh. The word you’re reaching for is EVIL. Our culture is evil because it is willfully disobedient to God.

“That’s an enormous problem because you’ve got so many Christians who don’t really know what their faith professes or what their faith even is. And if you don’t know what you believe in, exactly, then you’re not going to be able to maintain those beliefs.”

There’s a term for them. FALSE CHRISTIANS. Call them false Christians because that is who they are. They are not “Christians who don’t know what their faith is.”

Walsh is talking about false Christians like a Cuckservative talks about his politician. “He shouldn’t be doing this. We warn him repeatedly of what’s going to happen to society but he keeps doing it. I wonder why he can’t see what we do?”

Answer is, Mister Politician knows perfectly well that he’s doing evil. He loves to do evil because evil is fun and profitable! 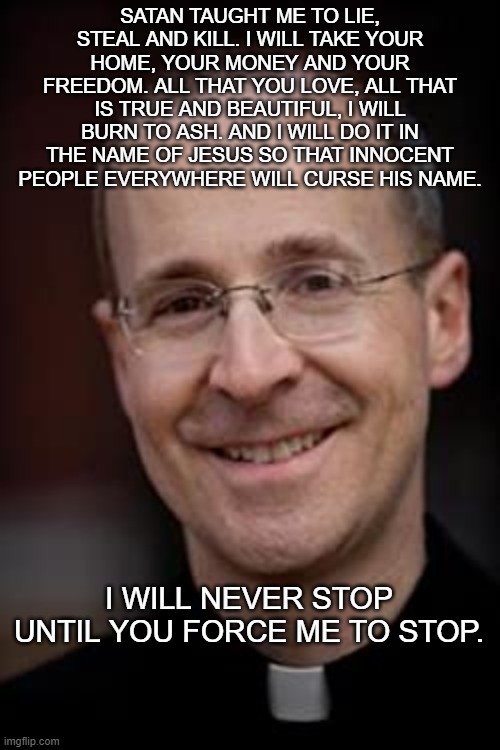 (For the curious, that’s James Martin, a Jesuit currently preaching sodomy with the Church’s blessing.

Martin said as well that Catholics who support gay “marriage” should have no problem considering themselves Catholic, despite having chosen to reject Church teaching.

He could as easily be a Baptist as a Catholic these days.

Similarly, false Christians go to church because they benefit from Sunday Morning Group Therapy. Why would they learn Scripture when they’re already getting what they want from their “faith tradition”?

At a time when there is increasing societal and political pressure for people to be accepting of the same-sex relationships and LGBT lifestyles, Walsh said that Christians with a superficial understanding of the Gospel are picking out things from the Bible that they like and “confirm what they already want to believe.”

“They kind of construct their own religion for themselves based on this amalgamation of out-of-context verses. And that’s a big problem because the Bible is so long and vast and diverse,” he explained.

“It’s not even really a book. It’s a library of books. And there’s so much in it, that if you’re going to go in and throw context to the wind, you can find anything you want. You can find justification for anything. I think that’s how a lot of people are approaching the Bible.”

No, you cannot find justification for anything in Scripture. That’s such a stupid belief that it disqualifies Walsh from speaking about Scripture entirely, if he thinks it really does mean whatever the reader wants it to mean.

Those “LGBT lifestyles” he mentioned, for example? Sexual perversion is not a context-sensitive topic in Scripture. There is no argument to be made that God will not butcher their unrepentant souls for eternity. And yet, all those Chinos believe it’s just something that makes God sad on occasion. That is not “subjectively interpreting the Bible”. That is “lying about the Bible”.

Walsh contended that Christians are not “forfeiting love” by confronting sin.

“It’s not that we’re confronting and fighting back against evil in spite of the fact that we’re supposed to be loving; it’s because we love that we do those things,” he said.

The groundhog is retreating to his Narrative hidey-hole. “We love you, Father Martin! That’s why you teaching people to disobey God by committing abominations with their bodies makes us feel sad!”

As some denominations over the past decade have affirmed homosexuality, Walsh believes that it is impossible to defend homosexuality in Scripture.

“The greater issue is just the misrepresentation of what you find in the Gospel. A good example would be things like ‘tolerance and acceptance’ are now presented in the church as virtues, even biblical virtues,” Walsh warned. “They’re not virtues at all. There’s nothing wrong necessarily with tolerating. It depends on what you’re tolerating. But there is nothing virtuous about it.”

Walsh exhibits the primary moral failure of the Cuckservative. He assumes, prima facie and against all evidence, that the determined enemies of God are kindhearted people with good intentions. They just need a little more education! That only works for socialists… because they beat you with bike locks if “education” doesn’t take hold.

He warned that some churches are teaching that tolerance is the “ultimate virtue” and synonymous with “compassion” and “love.”

Maybe we should also be intolerant of the people who harm people? Or should we fight against what they do while providing endless opportunities for them to do it again? Looking at YOU, Second Amendment advocates! Stop focusing on the legislation and start focusing on the politicians who author it! Even if you defeat a bill, they’ll just try again next year at your tax-funded expense.

“So I think we think we’re called to intolerance in many cases. Compassion is virtuous, but the version of compassion that is preached so often is something synonymous with acceptance and tolerance. Compassion actually means co-suffering. That’s the etymology of the world of the word, which means that you’re suffering alongside somebody and taking on their sufferings to alleviate that burden. Christ is the ultimate example of that. [Compassion] is a much more active and sacrificial thing than how it is often portrayed.”

Do Cuckservatives show off how book-smart they are so that the devil’s children will find their arguments more convincing? “Oh, okay, I’ll stop cashing my chilamony checks because you know the correct etymologies of the words I use to justify it.”

According to Walsh, churches need to be bolder in addressing the problems in the culture today and need to focus more on calling people to repentance and self-sacrifice.

No Cucking is complete without an altar call to navel-gaze. Hmm, yes, that IS a leech upon my navel, sucking out my lifeblood. Perhaps I should repent of my selfishness.

“We have to stop being afraid of preaching that message,” he said. “It may scare some people away. But the people who are scared away aren’t really Christian anyway. If they don’t want to hear the Christian message, they are not Christian. But for everybody else, this is what they want. This is what they are searching for. I think we have to provide that in the Church.”

If Jesus had preached with Walsh’s level of conviction then nobody would have bothered to crucify Him. Similarly, Walsh’s new book is no threat to the status quo.