Now THIS is a quarantine that I can support!

Malaysian Government Advises Women Not to Nag Husbands During Lockdown

Uh-oh. This was published on April Fool’s Day. But NPR confirms!

A government advisory in Malaysia is facing widespread backlash after instructing women to dress up, wear makeup, and not nag their husbands during quarantine.

In the wake of the southeast Asian country’s lockdown, Malaysia’s Ministry for Women, Family and Community Development published a series of posters to Facebook and Instagram, under the hashtag “WomenPreventCOVID19.” The posters urged women not to nag their husbands and to avoid being “sarcastic” when asking for help with household chores. It also encouraged working women to dress up and wear makeup, avoiding “home clothes.”

Translation: Don’t wear sweat pants. Do wear makeup. And behave professionally. I assume the bun is optional, however.

The Malasyian government clearly did not anticipate the overwhelmingly negative response to the bizarre initiative. “How did we go from preventing baby dumping, fighting domestic violence to some variant of the Obedient Wives Club?” one person asked.

“Avoid wearing home clothes. Dress up as usual, put on make-up and dress neatly. OMG! This is what Rina, our Minister of Women, Family & Community Development thinks is important during the #COVID19 lockdown?” complained another.

You have NO IDEA, female!

Advocacy groups see a larger societal problem with messaging like this during a time when all of humanity is trying to unite against our common, invisible foe: “[It] is extremely condescending both to women and men,” All Women’s Action Society manager Nisha Sabanayagam told Reuters. “These posters promote the concept of gender inequality and perpetuate the concept of patriarchy.”

By Tuesday, the Ministry relented, taking down the posts and claiming that they were simply an effort at encouraging people in “maintaining positive relationships among family members during the period they are working from home.” Nevertheless, they also pledged to “remain cautious in the future.”

We don’t need a military. We need to draft America’s feminists into a Biddy Brigade. No government can stand against weaponized female whining! 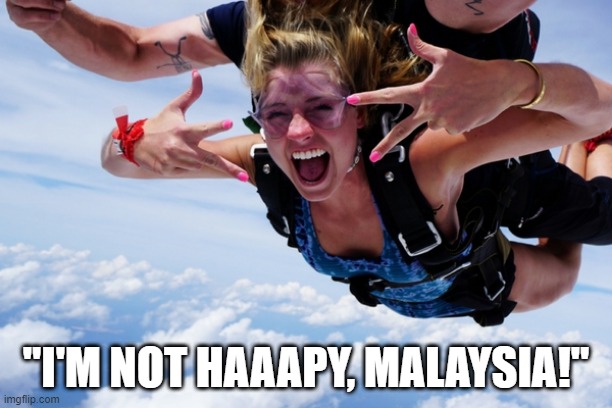 But there’s a legitimate question of whether we could maintain control of it.

Meanwhile, governments and advocacy groups around the world are looking toward a problem that is all too real: The dangerous risks of increased domestic violence when abusive partners are trapped at home with their victims. Or, as one such group tweeted in response to the absurdity, “Where is the one telling men to not beat your partners at this difficult time?”

The Super Bowl Lie resurrects! Remember that one, when feminist groups claimed that domestic violence rates peaked during Super Bowl commercial breaks? When men got up, stretched their legs, bashed their wife’s face into an omelet, then sat back down to holler at the referee?

Our leaders have stupid levels of foolish. The workplace was one of the few places for henpecked men to escape the extreme stress of feral wives. Confining them to wifey’s incessant nagging…

“When are you going to get a job and support me?”

“When the quarantine ends, dear.”

…who overwhelmingly deserve it.

6 thoughts on “Stop The Nag-A-Virus!”