The Los Angeles Times reports that gun stores are one aspect of the economy seeing a surge in business as Californians react to coronavirus news.

I’m shocked… that there are still gun stores in Los Angeles. It says so much that even the Woke don’t trust their God-Governments enough to face an uncertain future unarmed, to the point that gun sellers can remain profitable in the face of criminally malevolent regulation.

According to the LA Times, the line of customers at the Martin B. Retting Gun Shop in Culver City stretched out the front door and around the block on Saturday. Many of those in line waited five hours for their opportunity to buy a gun.

Snicker, suck on those waiting periods, morons! Those “them”-type problems keep turning into “our”-type problems at the most inconvenient moments, don’t they, ya low-information voters?

A doctor who wanted to buy a gun at the store said, “I want to buy a handgun, I think they call it a Glock, but I’m not sure. I have a house and a family, and they’ll need protection if things get worse. The fear is that civil services will break down.”

That’s right, Doc, you’re a low-information voter. Lots of education is not common sense so your M.D. is only worth a front-row seat to the Chinavirus Circus. The gun stores should voluntarily close because panic-buyers are the last people who should be allowed weapons but I understand why they don’t: malevolent regulation isn’t cheap and turning liberals into gun-owners is politically critical. For the latter, more here:

There’s also a self-cleaning oven effect. You thought TP hoarding was bad? Wait until the vibrants kill each other for a roll of TP! 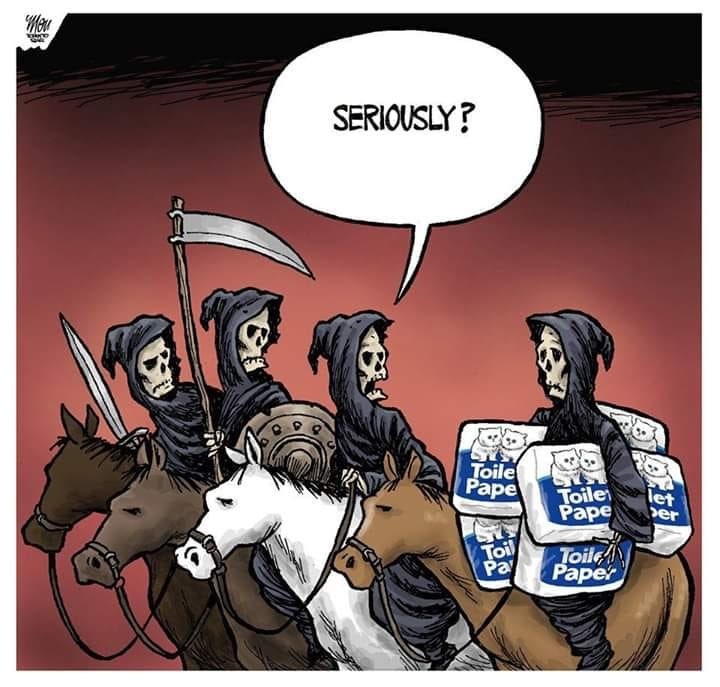 One supposes they might turn on us afterward but hey, we’re the people who know the difference between a Glock and a Colt… and have visited a firing range before Go Time happened.

Another customer, 39-year-old John Grove, said, “Politicians and anti-gun people have been telling us for the longest time that we don’t need guns. But right now, a lot of people are truly scared, and they can make that decision themselves.”

And John Grove believed the politicians’ promises right up to the moment that he would suffer if he continued believing them. Like an atheist on his deathbed admitting he’d always known God was real.

Ironically, scared people are the ones who CAN’T make decisions for themselves.

California has universal background checks, gun registration requirements, and a 10-day waiting period for completion of all gun purchases. So those who were successful in their search for a self-defense handgun Saturday will have to wait over a week to take possession of the firearm.

The owner of Laguna Guns & Accessories in Elk Grove, California, told the LA Times he has not seen guns sell at this pace since just after the 2012 Sandy Hook Elementary School shooting.

BWAHAHA! The article’s last line is how this became a blog post. What could go wrong with people calming their thin-skinned nerves with both drugs AND guns? Booze is obvious but what about weed?

Cannabis Sales and Delivery Boosted in L.A. to “Ease Minds” About Coronavirus

As the coronavirus spreads in California, cannabis businesses including Lowell Farms, Caliva, Sweet Flower and Sherbinskis say the demand is high: “People are stocking up.”
Tensions are running high in Los Angeles over coronavirus-related health concerns, the cancelation of numerous public events and the new normal of working from home. Local cannabis companies and delivery services say they’re seeing an uptick in business in these trying times. Angelenos are turning to CBD and THC products to combat anxieties and stocking up like they are with bottled water and toilet paper.

“People are in scarcity mode. The streets are emptier, but specific businesses like grocery stores and dispensaries are seeing more people than usual — and people are stocking up and purchasing in bulk,” says Steve Lilak, the head of sales for California cannabis company NUG. “I’ve seen regular customers buying three or four of what they normally buy just one of in L.A. dispensaries.” He adds that one Hollywood shop he spoke with saw 1,000 customers on Wednesday when they usually see that amount on a Saturday.

Dude, you told us you could quit anytime you wanted to.

A rep for Lowell Farms — the Miley Cyrus-loved label that’s behind L.A.’s Cannabis Cafe — tells The Hollywood Reporter pre-roll sales have seen “a slight uptick, potentially due to calming effect of cannabis and benefits of assisting anxiety.”

If there’s anything that could make me want to dank even less, it’s Miley Cyrus telling me it’ll be fun.

As for Caliva (Jay-Z is its chief brand strategist), its delivery business is seeing double-digit growth in March so far. “We have seen an increase in our delivery services across all of our locations, with record-breaking sales over the past two weeks,” says president Steve Allan. Sales have increased for the most popular products, including the Dogwalkers, Reef Leaf and Deli by Caliva Ounces and Quarters.

That reminds me. As a Public Service Announcement (and part of my court-ordered community service for claiming that a Jabbazilla photomorph is a legitimate composite of three black female socialists in a previous post), cannabis is bad for pets. Do not feed weed to Fifi. See how sad it makes Fifi? 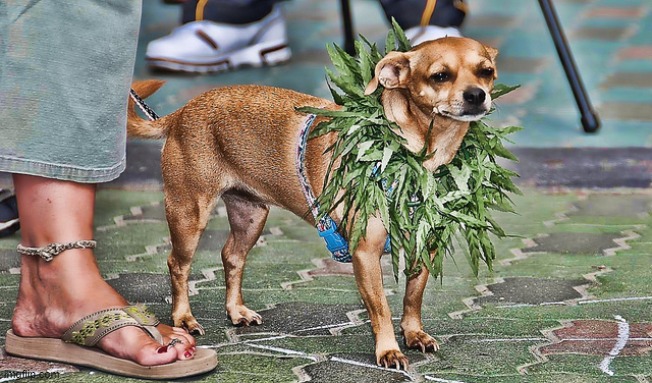 Calexo, a newly launched line of sparkling cannabis beverages with each $20 bottle offering 10 mg of “nano-emulsified” THC, is expecting a rise in sales this week, too.

“Hey, Bob, I think this water you stockpiled is already going… oooh, butterflies!”

Its CEO Brandon Andrew tells THR he does “anticipate sales to be swift, especially as people look for ways to cope with fear of the pandemic.” He notes, “people can adhere to social distancing by ordering through delivery from a dispensary like Sweet Flower on Melrose.”

[Sweet Flower] dispensary, with locations on Melrose, downtown and in Studio City, has noticed an increase in delivery orders, “which likely results from consumers avoiding contact within physical retail locations.” Sweet Flower is taking “necessary precautions and measures” to ensure a clean environment. (Fans include Sarah Hyland as well as Hollywood stylists Tara Swennen, Jessica Paster and duo Jill Lincoln and Jordan Johnson).

I don’t figure Chinese to be big toker-smokers so this must be how low-information voters (like your doctor) cope with media-overhyped reality.

And yes, pot shops boasting A-List celebrity endorsements is entirely consistent with how many recreational drugs get used in show business. Sometimes their egos don’t inflate themselves.